Ok, I decided it would be a fun idea to make this thread after I seen Ulrics thread and read corris posts

What Inspired you to create the fursona you have?
How did you come up with the design and is there any story behind it?
This a Question I have often wondered myself at times but never bothered to ask

I am basically a Black Domestic Housekitten with Blue accents and a gray chest.

Mine was Created over time, and started out as just a black Housecat
But it was not until I got into SL that I was able to make an actual illustration
Of my Fursona
which I built and made up and came up with from making my avatar in
Second life my Blue hair was a suggestion from a Good friend and the blue ear tips was a personal addition I added for some character and unique style.. which kinda shows my style of adding odd details something I tend to do in any of my arts, I chose a "black" cat because its a color I feel comfortable in
and is my favorite breed of cat, Plus the personality and nature of a black cat matches my own, I also chose Blue eyes to match the other odd details
and also adds to the "Cheery" expression my Fursona gives which shows my personality
The four colors Black, Gray, Babyblue, are also my common theme with things
(Computer scheme, cellphone scheme, Clothes, ect)
My outfit, which is usually always a white Tee, is what I wish to someday have
and kinda matches my clothing style "white shirt with black,or blue pants"
The studded collar shows my Finicky cat side for favoring pretty things and the Pawprint charm is my symbol of Furry/Babyfur Pride.
(its an important detail, I have a thing for Pawprints also, something I just love seeing on my fursona, its colors, silver rings with blue insides tend to stand out.. which it should.. I'm big on being a Babyfur and I show it proudly ^.^ I soo totally want a Collar or necklace with that on it!)
and the earring is.. well cause I have one Its supposed to be small but people keep drawing it as a Big ring o.o; its just a small ring (I have a small diamond stud IRL) that hangs off the edge.. since a stud would look odd onna cat ear

thats about all I can explain for now.. Hope it wasn't too long and drawn out... and Firefox totally hates me with all the typing errors... all the redlines under the words,
Last edited: Nov 20, 2008

Hmmm. Well let's see, my fursona is a greyish wolf cub with white chest fur. The name is Kilion, which is a common name for me. as for any other special features, I have red fur hair, and the tips of my ears are red. As for eye color, they are a dark gray color. As for features, there is a scar across my right eye which symbolizes my dark past, which I will not go into detail about here. I wish I could give a more of a visual much like Bobcat has...but I can't draw to save my own life. Haha.

Well, anyways here is bio. Kilion is 2 years old (uses to be 4, but I made him younger) who still wears diapers (duh). His nautre is very very clingy and sometimes can be a bit whiny(sp), like my own personality, and the reason I pick a wolf because what a wolf normally represents is my personality as well. I do have a black collar with silver studs, and a pawprint symbol on it to display my furry pride. Hmmm, thats all I came up with so far, but my fursona is a work in process since I was not a babyfur until last summer.

My little fursona is a fennec fox kit, with cream colored fur. His name is Iamie, but his nickname is Byte. His hair is a light brown, and he has dark green eyes. Most of his clothing tends to be darker colors, in browns and reds. I suppose he is somewhere in the age range of about 2-4.

I've liked fennec foxes since the first time I saw a picture of one; they're adorable creatures, and something about it just clicked. It's been the species of my little fursona ever since.

My fursona is a housecat with gold-orange fur, and white muzzle, paws, and tailtip, and blue eyes. He can change ages at will, becoming a toddler or a young adult as per the situation, and can ignite the tip of his tail by rubbing it with his paws.

When I was trying out the furry thing, I joined #babyfurs and asked what I should be. I decided there were too many foxes and wolves, so I tried a cat. Never really thought to change it. The current backstory is that while Grif was young, he played with the tailfire too much and occasionally got burnt. Certain parts became fire-resistant as a result and turned white. Other than that, it's all open.

I've always liked minimalism as a philosophy, and this is reflected in the overall simple design. The gold-orange fur was my tribute to Tails; he also has blue eyes, which I only now realize was also similar to Tails. But I just like blue eyes. The tailfire was simply a gimmick to make my character unique; too many babyfurs had either no powers, or high-magnitude powers. Zanza would sometimes freeze my tail just because, and those with fire powers struck me as cocky, the way they flaunted it. You don't need special powers, just resourcefulness.
C

Well... I feel before I can answer that I have to ask... what about those of us with more than one fursona? Say we change depending on mood or something? Do we describe all of them...or...?

I never thought of that o.o; tho I never understand shapeshifters anyways
can't ever stay in one person
Umm maybe you could describe the one you mostly are?
I dunno.. I made this thread out of curiosity to see how creative people were


DLGrif said:
too many babyfurs had either no powers, or high-magnitude powers. Zanza would sometimes freeze my tail just because, and those with fire powers struck me as cocky, the way they flaunted it. You don't need special powers, just resourcefulness.
Click to expand...

I like the way you said this ^.^;
I dun have any powers .. I save those for real roleplaying
I never needed any o.o; I always though it was silly

The otter one was a natural choice, as I love Mustelids in general and have been on the swim team for many years.

The wolf is a more recent development, and I'm frankly not not sure where it came from, but I can't say I dislike it. Both the wolf and the otter are fun to draw!
R

Why? Because I'm a very quiet, shy fur who likes to be huggled ^.^

In second life I am considered a plushie cause my avie looks like one o.o

well when i was first interested in the Fandom i thought i was a Fox or a Wolf. But then one day my friend from theatre said you remind me of a bear cub.. im gonna call you Cubby and the name stuck and alot of people call me that now.After that i took it upon myself to find out what kinda bear i was and Duh Polar Bear. So , My fursona is a cute lil adorable Polar bear cub and she would beat Knut at a cuteness contest any day. Her fur is always crisp white and she likes to wear a Pink bow on her head Backstage she wears a black collar ( black isn't cute but its a Techie thing) and a headset on her head ( bow has to go ) . Favorite thing to do sleep :] and when im not sleeping im out romping around exploring and having fun.

See? I love these back stories, I love seeing about how people came up with their stuffs

Haha she said reminded her of a bear cub cause im always hugging people... But she also says it about lots of things....

I wish I had a marci badge for my fursona ah well, since I cant draw to save my life..
C

It's not that I am a shapeshifter, It's that really I might as well be three different people... They all have unique traits. 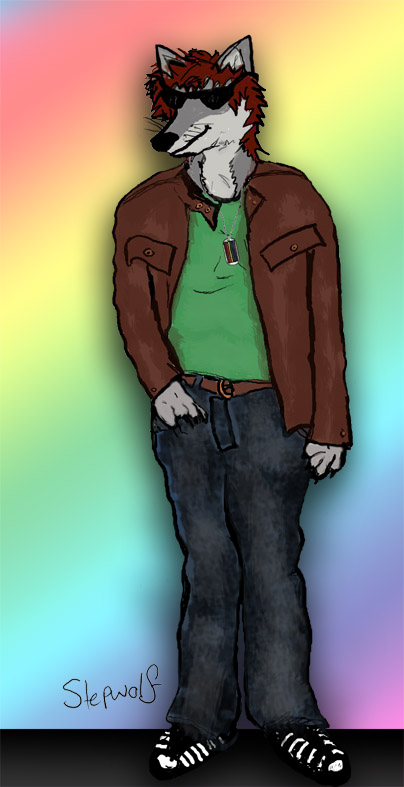 S' a picture I drew of my adult fursona. Haven't got any pictures of him as a cub though.

It's not that I am a shapeshifter, It's that really I might as well be three different people... They all have unique traits.
Click to expand...

has this thread died lol?

Im a wolf fursona with my own uniqueness so to speak. I have black fur with red flame like patches of fur. I wear black pants and a blood red shirt and a black cloak with a blood red inner lineing. Who knows what hides under my cloak. (aside from the diaper im wearing) ^_^

here we go, here is a sketch of mine!

My fursona is a Kitazari, a feline antrho race I came up with from A sci fi I've been piecing together for what seems like an eternity. Dark violet blue fur all over with white patches on the face, paws, and stomach. He tends to switch between ages, not with much accuracy. There's a general young adult/ late teen form, and a general cub form.

Like I said, this all came out of a sci fi I've been making. The character I just kind of plucked out of the plot and babyfur-ized a bit. It'd evolved from being a canine species when I was new to the whole furry business.

In my sci fi the character utilizes technology to transfer consciousness from one body to another along side genetic research and can literally be reborn again and again if he is ever severely wounded or dead. He's been living that way a long time, and lives out the childhood of the new clone he takes on as a vacation as to speak.

Powers? Naturally he has to have some sort of kooky ability. Energy manipulation via the mind is his. He can do a multitude of the spectra of energies. Light, electricity, gravitonic force are a few. The only things he can really do with them are convert them, form them into shapes and the like. Takes a lot out of a cub to mess with energy, however. Often after using up the energy available to him he's helpless and his main consciousness goes into hybernation waiting to get enough energy to function again.

Hmmm... Hope I didn't smack anyone with a wall of text.