All-Through-the-Nights are one of Tranquility's most absorbent products. They aren't as common as Depends so they aren't carried at chain stores but they can sometimes be found at medical supply stores or be obtained by ordering online. This review is for the "medium" size. 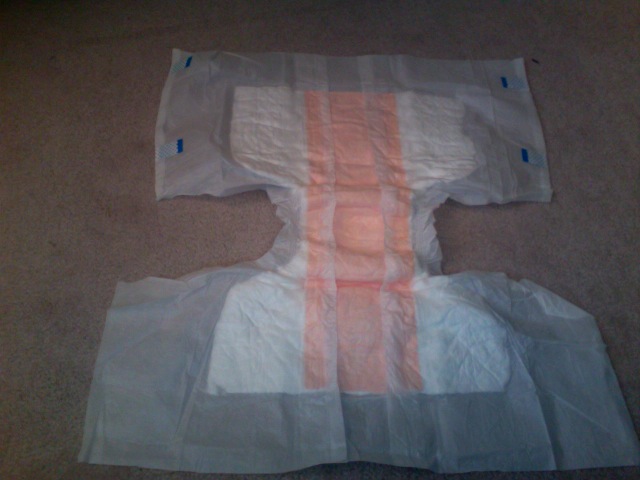 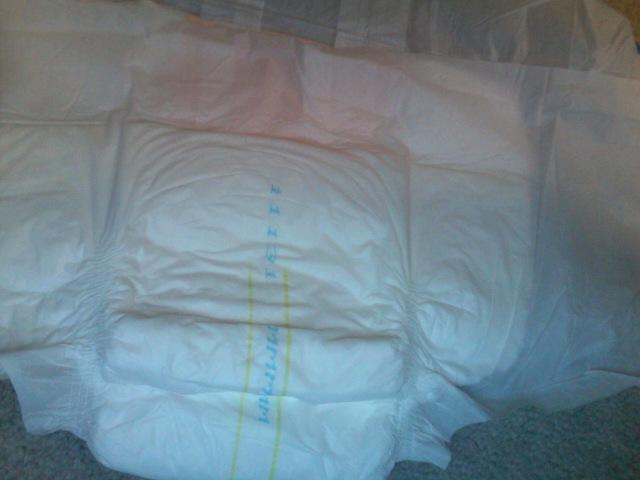 These diapers have a medical appearance to them. The outside of the diaper is white with two parallel yellow lines along the diaper as wetness indicators. Between the two lines, there is writing indicating the type of Tranquility diaper, the size, as well as some numbers. As the diaper gets wet, the yellow lines turn blue and the writing between the lines disappears. The padding down the middle of the diaper is peach coloured while the padding on the wings is white. 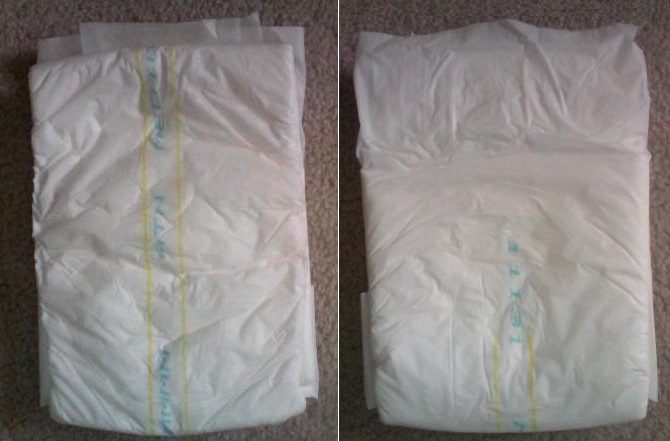 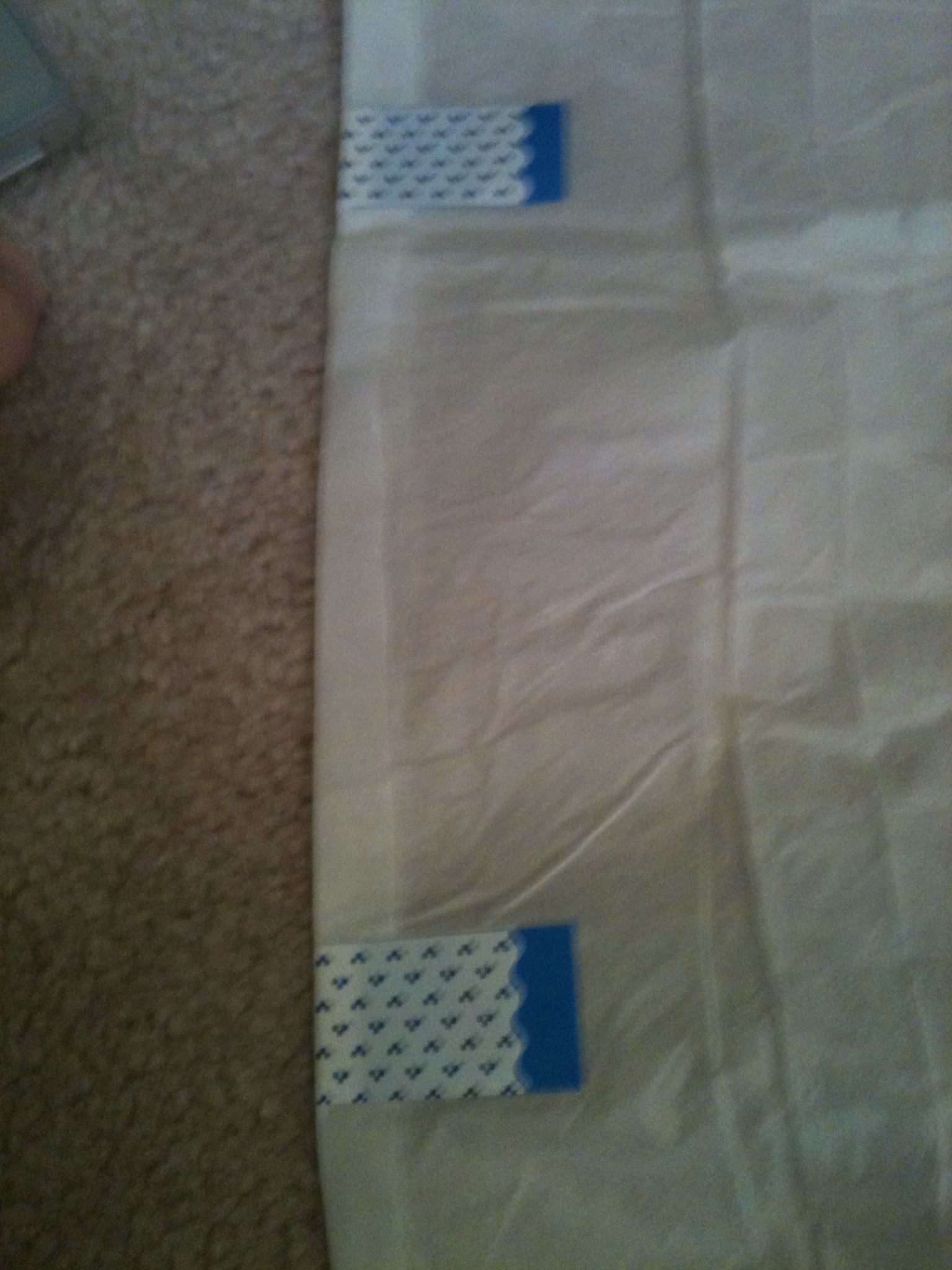 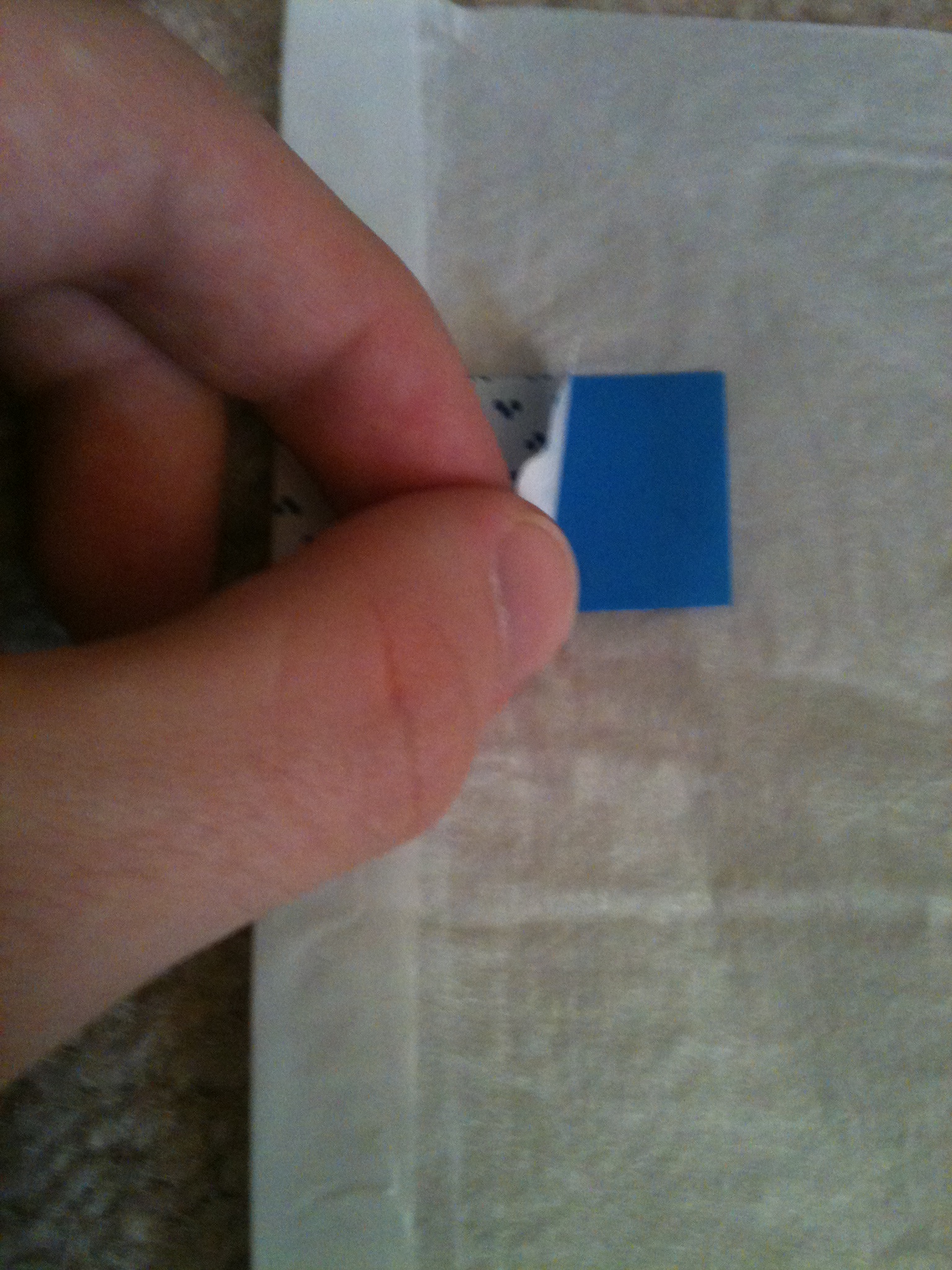 As the pictures show, the ATN uses a double tape so it can be readjusted once if needed. When I applied the tapes, they didn't feel very strong but despite that, I didn't have any problems with them coming unstuck. These diapers lack any kind of landing zone but I didn't find this to be much of a problem. These have 3.5" (9cm) of plastic above the padding and lack an elastic waistband. 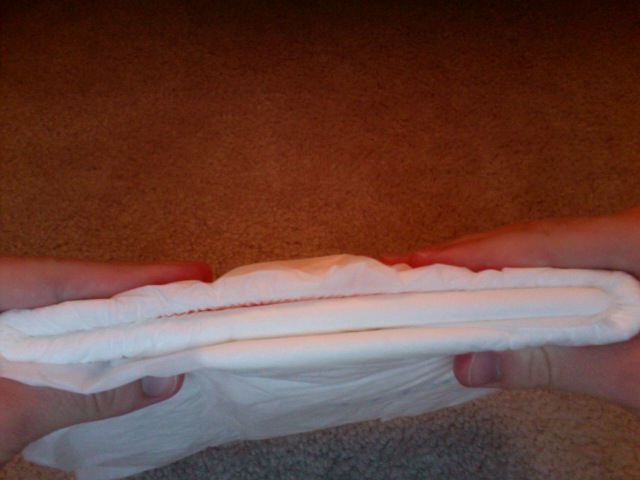 The packaging of the ATNs states that one diaper can absorb 812 mL or 27.5 oz. When I tested them, they held two wettings and leaked on the third. I tested the absorbency more thoroughly by slowly pouring water down the front of the diaper in 100mL increments and seeing how it held up. By doing that, I found that the diaper started leaking when I had poured 900mL of water into it. I also found that once the wetness began to spread to the back, sitting down immediately after wetting it caused some of the wetness to press out but this didn't happen after I had given the diaper a couple of minutes to absorb.

The ATNs are quite thin when dry but swell up considerably when they get wet and they do a good job of keeping the wetness away from the skin. While they are thin, they're not exactly subtle since these diapers are very, very crinkly. If one of these diapers is worn in a place with no ambient noise, the crinkling sounds that this diaper makes will be noticeable. 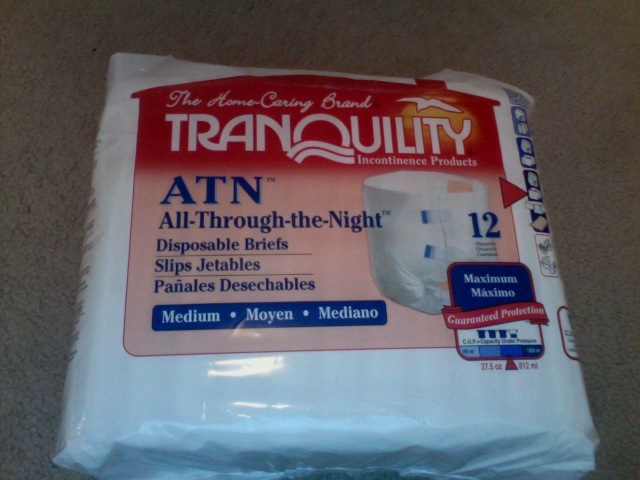 Overall, I found these diapers to be somewhere between store brands and premium brands in terms of quality. The performance of these diapers isn't as good as that of an Abena X-Plus or a Bambino, but they're definitely superior to Depends or any generic store brand diaper. Also, unlike premium brands, they're carried at some medical supply stores which makes it possible to acquire them without having to order online.
Last edited by a moderator: Dec 25, 2014
L

Of all the times I wore Tranquilities, they had the nasty habit of their elastic cutting into my legs, leaving nasty red elastic marks and being very uncomfortable. I never experienced that with any other diaper I've worn, even when applied very snugly. Have you had this happen with these Tranquilities?

Aside from that, they perform okay: they absorb fair, but pool up during wetting; thus, absorbency takes time.

I never had a problem with ATNs. I use them nightly for bedwetting and I very very rarely have any issues.

I have use,d these and find them very good

I find that these are perfect for daytime wearing. They don't tend to show much at all under clothing, and they're comfy.

My biggest issue is that the medium tends to run a bit smaller than most other mediums that I have tried.

I agree, except the medium being small is good for me with a 31" waist.

My biggest complaint is how high they rise after taping. There's quite a lot of loose plastic that could probably be solved with a little elastic in the front and back.


LittleLettuce said:
I find that these are perfect for daytime wearing. They don't tend to show much at all under clothing, and they're comfy.

My biggest issue is that the medium tends to run a bit smaller than most other mediums that I have tried.
Click to expand...

Attends Poly Briefs, might they merit a formal review?

I tried a pack of these recently and will likely buy more. On the upside, while not a really high capacity diaper, they are dependable and quite inexpensive. On the downside, I found the QA sometimes lacking. The leak guards were sometimes collapsed right out of the bag, and I needed to secure the paper-like material with a staple or two. Also on a couple occasions, I noticed during a change that the (single) elastic band on one side had snapped. I love the plastic shell, and tucking all the loose plastic creates a tighty-whitey appearance, which is trimmer than most diapers. The plastic is loud, but I've had worse.

These are a good diaper, but are extremely noticeable. I've worn them many times at home and out in public. At home my wife looked at me and said... "what is that sound"...super embarrassed. Out in public, even in a loud location, the sound is undeniably a diaper. If you were to walk close to me, you'd here it for sure.
J

For the price, these are a good bargain.
B

Sent from my KYOCERA-C6742 using Tapatalk

First of all, sorry for necro-posting.
I have gone through a large sized case of 72 and can rate them myself. The quality control on the tapes in recent batches are horrid. Some of them I had to use the second tape right away, others were impossible to wear because the tapes were bad on one side. I've had mixed results with capacity. Some of them in my case held more than others. I know that the ATNs cannot hold floods or large wetting all at once, so wetting them over time does allow some of the padding to become available for more wettings and therefore increase the longevity of the diaper. I would rate their capacity at 6-8 hours and nothing more due to the inconsistency that these diapers provide. I also modded them with diaper tapes to create a landing zone with mixed results. In contrast with the OP, the tapes have come off multiple times forcing me to use the second tape and in some cases (when the tapes are bad) having to remove the diaper outright.
R

AustinTheLionhearted said:
First of all, sorry for necro-posting.
Click to expand...

What is "necro-posting?" I haven't heard it before, but I'm thinking maybe posting on an old topic?

I've tried ATN's several times, and while I want to like them, each time I get a bag to try I am disappointed. I have found that the tapes are a bit delicate and easily torn right off the diaper when trying to get a snug fit (at least 1 to 2 diapers out of every package). They are comfortable to wear, and more discrete (thinner)than some of the premium diapers out there, but their performance reflects that. I agree, these are a step between drug store brands and premiums. As a heavy wetter, these don't work for me, but should be fine for a light to moderate wetter.
I

). I always purchase and wear in conjunction with a topliner booster also from Tranquility. I wear a lot when driving and occasionally to work and go anywhere between slow dribbles to flooding depending on my mood. The tapes hold up well, I can only attest to one QA problem where the side ripped completely off. Very comfortable and as others have noted very noisy. I always wear with a boxer brief over any diaper so this works to keep everything in place and suppress the noise. They swell immensely which I happen to like. They do keep moisture away from skin well too. All and all, in the dying age of plastic back briefs for a reasonable price with local availability these have been my go-to brief for quite a while.

I just recently got a free sample of these; 2 Large ATNs. As others have said the tape system is a bit wonky. I like that there are 4 and they give you a second chance with the double tape system, but they do rip the poly shell easily. First one I used with two tranquility topliner boosters, to test the capacity, bulge and feeling. I'm a very heavy night wetter, and frequent/urgent during the day. Woke up very wet inside AND outside of my diaper. Luckily I use chux so it didn't ruin my bedding. I must have had the tapes too tight or snagged the top right one. Either way it leaked from the hole, and both leg holes...
Next night same setup, but took my time for a good fit. No leaks.
Conclusion: Agreed with others that they're not the best QC, but for the price a good choice. With more practice I think I could use these as my regular overnight diaper.
:educate:
C

They Are a good Diaper, but you must get fit right. I find they are slim to wear under jeans. I use a onsie and noticed they can be noisy but most people won't notice
S

you should try the tranquility supreme briefs , textile backing .

They work great for me. Great deal for the price.

Carnifex said:
I wear these diapers on a regular basis and I think that they are okay but they also benefit from using a booster pad
Click to expand...