So, looking at the polls, you can get a very different picture on the upcoming US election. Some put Obama 10 points up, others put the split at only 2-3 points. Do you think, in the end, this will be a tight race, or there will be a landslide?

I think its going to be quite close, along the lines of the 2000 elections, maybe. At this point I am so completely fed up with the whole farce that I really don't think it truly matters WHO wins, because there is always congress to keep screwing us while we are down. O well, at least it's almost over.

I didn't vote in this poll... Personally I have no clue... I missed all of the debates and stuff, but i'm not old enough to vote anyway. I try not to get involved with poloticts. My grandma will kill me no matter what side I support.

Would be interesting to see Obama Destroy the country, not as good for MC.

Is there such a thing as a landslide in American politics? Honestly, I'm guessing this election will be tight like pretty much every other one. I've watched some of the debates and of course read about it constantly in the news and from what I gather, it shouldn't be a close election (Obama took the debates easily I thought), and yet it will be.

spacemanBEN said:
Is there such a thing as a landslide in American politics? Honestly, I'm guessing this election will be tight like pretty much every other one. I've watched some of the debates and of course read about it constantly in the news and from what I gather, it shouldn't be a close election (Obama took the debates easily I thought), and yet it will be.
Click to expand... 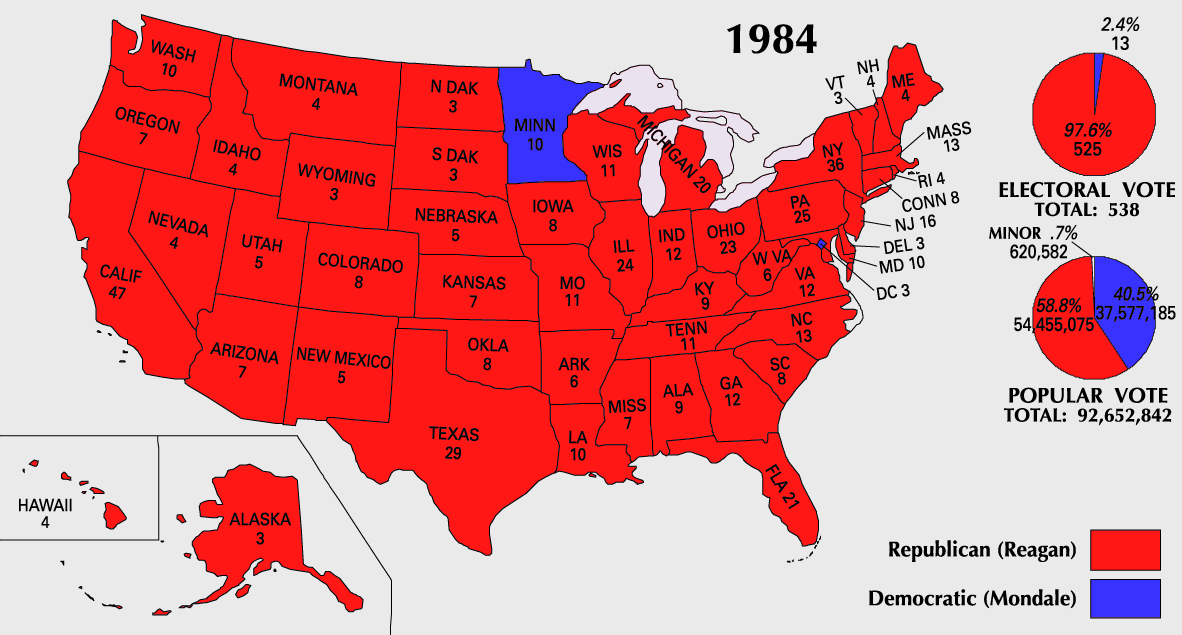 Thanks for the correction. In any case the majority of American elections seem to be close, especially in recent times.

If either one gets the ignorants and illiterates to vote for him, he wins... as easy as that, and it has always been like that.

the thing about the polls is that they're conducted by phone, and pollsters can't call cell phones -- only land lines. so in recent years, polls have been drawing from an increasingly unrepresentative sample. people who have a cell phone but no landline aren't represented in the polls, and those people tend to be young. and young people tend to vote democratic.

nevertheless, mccain's still got plenty of tricks up his sleeve. oil prices are falling as we draw closer to election day, and nobody should be under any doubts as to why. the latest thing i've heard is that there's a growing grassroutes movement to stall the election on account of questions surrounding obama's citizenship. some people apparently think his birth certificate is fraudulent and that he was actually born in kenya. then there's the bradley effect. and there's always an element of fraud in US presidential elections. all things considered, i think it's likely to be an extremely close race. as spacemanBEN pointed out, all recent US presidential elections have been tight, and there's no reason to expect this one will be any different.

Well it will be a tight race. Obama will most likely win the popular vote. but who knows about the electoral collage. take the 2000 election Gore won the popular vote but here we are with Bush.

I think it's going to be a pretty tight race, and honestly its coming down to just a few states. Since the popular vote across the nation doesn't necessarily decide the winner, this election is really only being fought in a few states like Pennsylvania, North Carolina, Ohio, Florida and a few others. I've taken a look at most of the polls that are out there (i've been glued to the news for the last month or so) and there's some that give Obama a large lead, some that it's only a point or two. Also, most all of the polls are within the "margin of error" and while I believe Obama has a better chance of winning, McCain could win this thing.

Avery, you mentioned about the cell phones impacting the polls and I must say you have a pretty valid point. Being of the 18-25 age bracket myself, I didn't have a landline until a few months ago when I moved to a new house that was in a cell dead zone, though I still haven't been called about my opinion. My concern is that while the younger demographic generally swings toward Obama, the 18-25 age group never turns out in record numbers to vote, which is very sad in my opinion. It seems as always the campaigns are courting the middle aged and senior citizens, groups which could go either way, probably because senior's always vote in record numbers.
B

The problem I see for Obama is that he'll have to win by at least 5% just to overcome the entrenched, organized vote fraud that the RNC goons pull off each election since 2000. After all, Bush never won an election fair-and-square, and I doubt that the RNC is going to simply let McCain run on his own merits.

Butterfly Mage said:
The problem I see for Obama is that he'll have to win by at least 5% just to overcome the entrenched, organized vote fraud that the RNC goons pull off each election since 2000. After all, Bush never won an election fair-and-square, and I doubt that the RNC is going to simply let McCain run on his own merits.
Click to expand...

I don't know about that, but I do know that ACORN is solidly in Obama's camp and their actions seem pretty fraudulent to me, they registered one guy over 70 times!

It's impossible to really know how an election will turn out until it happens, even when the media and pollsters aren't given as many mixed messages as they're giving nowadays.

I'm reminded of the 1992 general election in the United Kingdom, where everybody believed Neil Kinnock and the Labour party had all but won the election, only to be narrowly defeated in the end by the incumbent Conservative government under John Major.

There's a theory, can't remember the name, but it's that 5-7% of those who say they'll vote Obama for a telephone poll will actually vote McCain once in the booth. The idea behind this is that there are still far too many citizens concerned with Obama's race, and want to appear that they are progressive and have no issues with it (and probably agree with a lot of his policies), so they'll put their vote for him in a poll, but once in the privacy of a voting booth they'll go with the candidate they are more comfortable with- McCain.

It will be a close race. Obama has a lead, but there are 8 days left, and anything can happen.

I predict a very very close popular vote... and I think the electoral college vote is going to be almost too close for comfort.

If you look at the latest polls... McCain is gaining ground in a lot of states... some states that were clear-cut for Obama last week have turned around.

Of course I have never been one to believe the polls... but I think if you take them all and average them out you'll get a pretty good idea of what will happen.

The other thing that hasn't been taken into account yet are the massive amounts of people who are voting early at polling sites across the nation. The site right down from our house has people lining up an hour before opening... and a 2-hour wait all day just to get in and vote.

Thousands upon thousands are voting early nation wide... and I guarantee you their votes are not being represented in any of these polls. Obama has been pushing early voting for a long time now... and I am willing to wager that a lot of early votes are going to him. How that is going to figure in the count next month will be very interesting.
B

I predict a very very close popular vote... but I think the electoral college vote is going to look quite lopsided.
Click to expand...

One of the reasons why the Electoral College needs to be abolished is that it's theoretically possible for a winning candidate to have *much less* than 50% of the popular vote. One extreme scenario is that a candidate can get a 50.000001% vote in the twelve states with the highest number of electoral votes and get virtually no votes in the remaining 38 states. It's never happened that way, but there's no legal reason why it can't.

I hate all the poll talk I wish it would be against the law for this stuff since its nerve wracking on both sides. I just wish it was election night so we could finally see who freaking won.

Also I agree with Darkfinn on all of what he said. I voted my mail myself and like I though I would I voted for McCain, though I am not sure how much that is going to matter here in CA.

Ace said:
I don't know about that, but I do know that ACORN is solidly in Obama's camp and their actions seem pretty fraudulent to me, they registered one guy over 70 times!
Click to expand...

They also registered the entire Dallas Cowboys team in multiple cities, have registered thousands of dead people, and get this... They're all registered Democrats. They also have taken financial contributions from the Obama campaign. Go figure.

My main man, political analyst and commentator Jay Severin (also a devout Constitutionalist, and VERY informed and intelligent guy) has said, as late as a few hours ago, that there is almost no chance McCain will win. It's a tough thing for him (and I) to accept, and if he's saying so, it's got to be true.

I don't want either candidate to win (Libertarian, here), but if Obama wins, I'll look at the bright side and know that his presidency will probably do some to loosen up the two-party system we currently are stuck in. People are beyond fed up with the Republican Party (and rightly so... The last truly Republican Presidential candidate was Buchanan in '96), and after four years of Obama's Marxist regime, people will be looking for something different... At least I hope. People don't get what "spreading the wealth" means, until it hits their wallets. After a few years of increased taxes to pay for programs for illegal immigrants, lazy people, and corporate bailouts, everyone is going to want their "change" back.