Nearly all ABDL diapers and several medical diapers from premium brands commonly available in the United States in size medium in January 2020 for no more than ~$3.50/diaper were purchased at various points over the previous 2 years to create and further build a panel for testing under the newer, "advanced" ADISC testing protocol. Diapers which are no longer available have been excluded. In rare cases where major changes to a given diaper are known, they have been retested, but one caveat is that if unreported run-to-run changes have been made, the particular test may not perfectly reflect the current product. Diapers that differ in print but are otherwise the same diaper are treated as the same diaper for the purposes of generating capacity test data.

Price per diaper was determined based on the lowest price inclusive of shipping I could find on a given diaper at the end of February 2020. For most diapers, this means price was based on buying 1 case. In rare cases where several diapers were only available in single packs (FAB SENSE City Print, AwwSoCute), this means prices was based on buying 1 pack; this situation has become rarer with time as such products have typically either failed or have scaled up to sale at the case size. For DC products (DC Idyl 2017, DC Amor 2018), this meant price was based on buying one quad-case. For comparisons which involve price, diapers which were grouped as one diaper for capacity because they differed only in print were further subdivided when products with different prints have different price points – for some but not all diapers with multiple prints, solid color versions typically are sold at lower price points than those with prints. 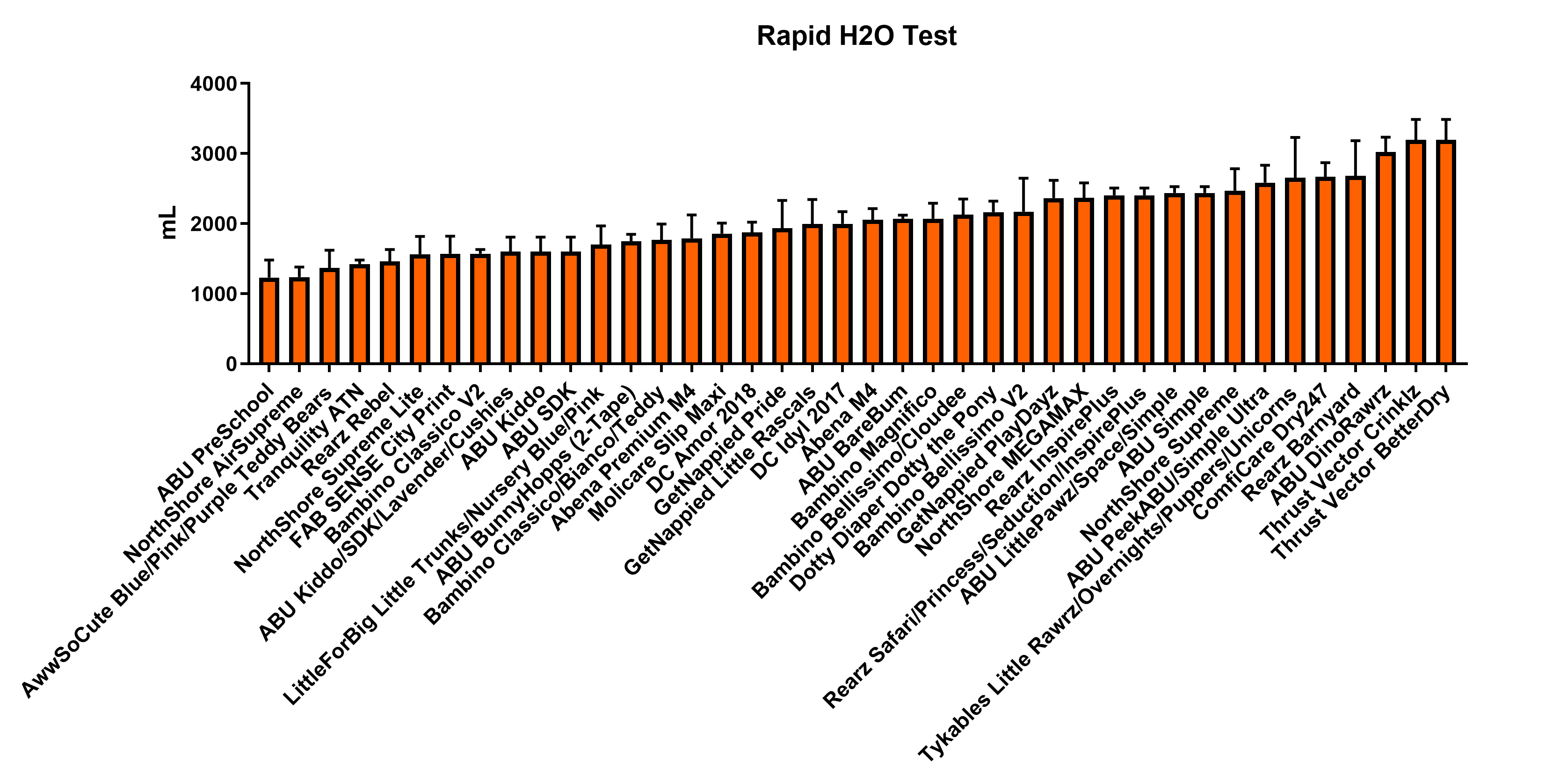 Since the original publishing in 2018, the top tier Thrust Vector Crinklz/BetterDry has been joined by ABU PeekABU and ABU DinoRawrz. Many of the new products released in the past 2 years have filled out the middle between the previous 2nd tier of products; Tykables Overnights/Little Rawrz/Puppers/Unicorns which is an improvement from previous versions of the Overnight leads this tier 1.5. 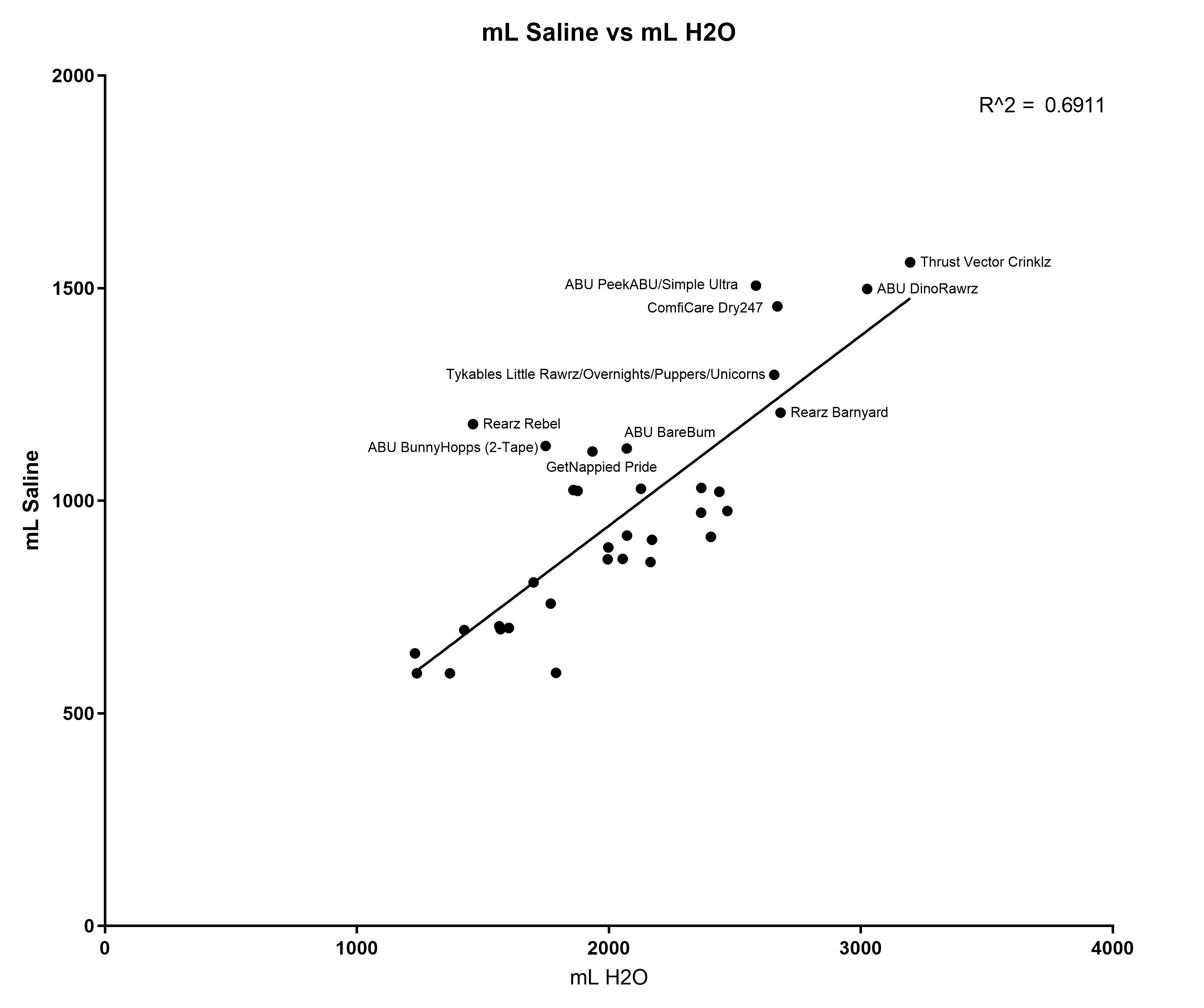 In general, new products of the past few years have consistently improved capacity over what was common 5 years ago, and have increasingly shifted towards hook-and-loop tapes. Where there is some divergence between the H2O and the (more realistic) saline test is that thinner, higher-SAP diapers and new hook-and-loop diapers tend to outperform in the H2O test. SAP absorbs pure H2O better than saline and this test more dramatically expands a diaper, so this test can be viewed as a sort of stress test for other physical elements of a diaper’s design. Hook-and-loop tapes notably tend to grip far better and do not slip during these tests, so I anecdotally speculate that mechanistically their out-performance results from being able to maintain a tighter leg seal as the diaper expands.

It is typical among high-capacity adhesive tape diapers to underperform on the H2O test relative to how they perform on the more important saline test. Nonetheless, the overall success seen consistently by several brands over most previous products by this wave of hook-and-loop diapers suggests that this is a helpful feature in both tests.

The dry mass of diapers correlates with capacity overall in both tests but there is a large spread. You cannot generally guess how a diaper will perform based on how heavy/bulky it seems; many other factors confound the issue of predicting performance.

Medical diapers are generally good deals relative to capacity spread across a wide range of capacities. Crinklz remains the standout ABDL printed diaper, but has seen price increases since it became widely available in the US in late 2017 and the gap has been narrowing. The best deals in ABDL diapers include Crinklz, ABU BareBum, ABU DinoRawrz, and Tykables/GetNappied PlayDayz – not necessarily the highest pure capacity products, but instead a variety of different capacities which are disproportionately effective for other reasons.

Broadly speaking, most diapers fall into a narrower capacity range than the difference in across the field in pricing. Nearly every diaper available for ~$2/diaper or less is in the top half.

Low Correlation Between Price and Capacity

As of this writing in April 2020, the correlation between price and capacity is weak and not statistically significant by typical standards. Diapers are priced on more than factors than just capacity; some lower capacity products are very efficient and some higher price products have been disappointing due to design flaws. Most ABDL manufacturers do not sell their products in consistent proportion to capacity, and in several cases unprinted versions of the same diaper are available at a lower price.
In general, you can expect to pay extra for complex prints. Larger cases sizes tend to result in more efficient prices relative to capacity. Current higher-end new flagship products have generally scored well on this measure because the most recent round of improvements to capacity and tapes has been effective.
Last edited: Apr 25, 2020
D

I have some diaper reviews saved. I have been wearing since the 70s
P

Thank you so much for all the work that has gone into this! I love hard data, charts & graphs, etc.
W

As an engineer I’m most impressed with your new procedures.

Just one question, has there been any consideration to including the premium medical diapers (Abri-Form M4, ConfiDry 24/7, NorthShore Supreme) in the new testing? From my perspective it would be most interesting to see how they rank against each other as well as the AB diapers.

MMMM... scatter plots... you dreamboats you

Wow! What a ton of work. Thanks for all the things you do, even diaper reviews.

Nice job with all the testing and reporting. Some surprising results. Thanks for all the work.

Lover of Life, Singer of Songs

Thank you so much for doing all this fantastic work! This is useful, meaningful, and very much appreciated.

Thank you! I'm not getting much info from the charts. Maybe I should try accessing them form a different device. So we know what the top ABDL diaper is and where to get it. How about Bambino Teddy? Would it be tier 3? Is there a list of which stores to buy which diapers to get the best price? I'm not really on the market right now, but I may decide to buy something eventually.

This is an amazing analysis, a really good job!

Thank you so much you did an amazing job. I love the charts, made me think of my satistics classes in grad school lol.
B

Thank you so much for your hard work.

:detective3 I am sincerely impressed with your work Fruitkitty. :claps:

This information is helpful and scientifically correct analysis that sheds light on the cost effectiveness of adult diapers and where you may be able to get the best effectiveness for your money when it comes to capacity.

:detective3 One suggestion, in your research --could you perhaps shed a bit more light on the meaning of the graphs and give some layman's or laywoman's terms as to the meaning of them? While I believe I gained a pretty good understanding of your analysis as I have been through statistics and happen to have a degree in science, but not everyone may be quite as familiar with the graph charts and analysis.

Thank you for the huge amount of time and also expense that went into this project an analysis. I applaud you highly for your work! :worshippy:

-- Also, one aspect that is much more difficult to ascertain is the social science surrounding adult diapers and which ones happen to provide not just capacity, but the "feeling" that goes with wearing diapers as an ABDL.

Capacity is certainly one of the most important things surrounding adult diapers, but how about other tests, such as thickness, crinkleness (noisy vs quiet), softness and comfort, and overall feeling of babyishness :cloud9: (my own invented word) or girlishness :sissy: or not girly, or medical feeling vs. nonmedical. These are more part of the social science that would have to be determined by other measurements as well as survey and opinion. They are also much more open to individual interpretation, but ultimately are some of the most important criteria as to why one purchases a specific diaper over another.

You shared that you will be giving updates to your analysis, I was wondering if these other criteria happen to be part of your plans for review?

-- In any case, thank you for your time, funding, and research that you have given in providing this very helpful information to our community.

Great study. I'm happy in Crinklz right now, and they are totally impressive. That said, there's something adorable about the ABU Preschools - including the fact that they tend to get leaky. Anyway, big crinkly pat on your little tushies for doing this.

Having studied them all, can you point out the ones that have good side padding for a back or side sleeper? I see the normal design is padding straight up the middle, with a high leak propensity.

BlueGrey said:
Having studied them all, can you point out the ones that have good side padding for a back or side sleeper? I see the normal design is padding straight up the middle, with a high leak propensity.
Click to expand...

Yeah, I've tried them ALL! The ONLY disposable I have found which works for side sleepers is Betterdry/Crinklz. Confidry 24/7 comes close, and will also work- but only with a baby diaper booster cupped over your penis. Northshore Supreme comes in third, but starts out too compressed to work good right off the bat.

After that, you're looking at really thick reusable cloth diapers. I've tried them too, but found after a while the added thickness caused a number of problems in my hip alignment (even with a memory foam mattress).

One other remote possibility is to get a reclining bed. While I normally can't fall asleep on my back, I have found that when slightly reclined I CAN fall asleep on my back (though that may just be from my too many, and tiring hospital stays). Short of that, catheters and a bag always works, but at a bit of a trade off for overall comfort.

Looks like Betterdry Crinklz does have a spread in the front and back for better protection. Their website quotes in euros. Is Northshore Crinklz the same product, but shippable in US?

For me, cloth and plastic are best, but I have some travel to do soon, and cloth is difficult.
B