I have been under a bit of a strain lately. With a relative in hospital and other issues , I felt stressed. So I decided to do something about it. Something that I like to call 'Regression Therapy '.

On the Monday morning of this week, I woke up in my pink striped women's pyjamas, with nappy pants underneath. As ever, I'd been tucked up in bed, cuddling my teddy-bear and sucking my thumb.

I swapped my pyjamas for a pink, fleecy, zip-fronted, footed pair. This would now be my romper-suit. I also put on a bib. 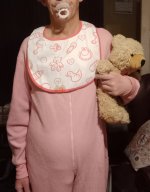 Heading downstairs. I pretended that I was under female domination. These two fictitious women were 'Auntie Claire ' and 'Nanny Victoria ", who enjoyed humiliating me.

Once downstairs. I decided to have my usual cup of tea, only this time it would be very milky and in a ' sippy" cup. After drinking it, I made a pot of instant porridge. As I spoon-fed myself, I pretended that 'Nanny Victoria " was doing it, saying things like "There we go, Babykins. Eat up the yummy porridge".

Afterwards, I changed back into my adult male clothing, as I had lots of things to do. I kept my nappy-pants on, however.

After lunch, I pretended that I had said a naughty word and was being frog-marched to the bathroom to be punished. Leaning over a chair with jeans and nappy-pants pulled down, I spanked myself with a plastic hairbrush. I pretended that 'Nanny Victoria ' was administering it whilst 'Auntie Claire 'looked on, commenting that "Naughty girls get punished " and asking me if "I was going to be a good girl instead" .
"Yes Auntie", I replied; "I promise to be a good little girl".

After pulling up both jeans and nappy pants, I then put on a pair or white, lacey anklet socks and a pair of black Mary-Jane shoes. 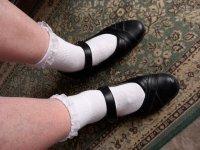 Downstairs, I sat at a table in my living room, sucking my dummy. As I did so, I did some of the things in the following book- 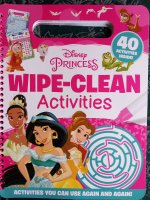 I found this to be very enjoyable and relaxing as I sucked my dummy. Then, after reading a Disney 'Cinderella' book out loud, it was back to the adult world.

Much later, in the early evening. I went upstairs to my bedroom and closed the curtains. My jeans were then swapped for a box-pleated skirt. Sucking my dummy, I pretended that 'Nanny Victoria ' made me pull up the hem of my skirt to reveal the nappy-pants. 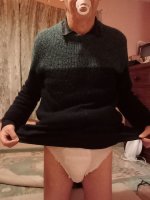 "This is to show everyone that although you are a little girl, you are a bit under-developed and have to wear nappy-pants and suck a dummy ".

I then spent a short time playing with my dollies. All too soon it was back to the Adult world, although when I went to bed, I was in my pink striped women's pyjamas, sucking my thumb and cuddling my teddy-bear.

So did it work? - yes, I felt a lot less stressed than I had been. Which shows you how effective a strong imagination can be.