So as of now I’ve been a member of this board for less than a week, but in this time and the last few weeks I’ve been able to rediscover my love and acceptance of diapers and their role in my life.

I’m currently close to graduating college, living on campus but in a very large apartment style dorm that I have a decent amount of privacy in. In my teenage years and before college I had a minor interest in diapers that I didn’t really understand, I always had a fascination with them but it was always passing or a once in a blue moon kind of thing.

Over my last three and a half years of college I’ve run into very stressful and anxiety inducing work, the work I do is very intense - very people and social oriented and takes all of my brain power and effort at every point to accomplish. (It’s a film program lol) So I have to juggle the needs of being an artistic creator, a technical wizard, and a people person all in one to accomplish my projects - suffice it to say my mental health hasn’t been great, but it’s something I love to do. Cue up the diapers

In addition to my fascination with diapers I also dabble in tasteful crossdressing (Think more Femboy-esque, lots of emo phase looking stuff and punk aesthetics at times rather than the super fetishistic stuff).

I was bringing some of these clothes over from home when I found an old bag of tykables little rawrs I had gotten a couple years ago when I was in one of my weird diaper phases, only wore like one and then forget about them in my closet. I’m not sure why I grabbed it but I did! Hid it in my room under the bed and forgot about the bag again for a few months, that was until a pretty stressful and upsetting night after a shoot. Nothing had gone wrong - it was just emotionally and physically draining. For some reason I thought of the diapers under the bed, and I decided to try them again. And after a few hours of laying in bed, lounging and playing some video games I had been able to feel a lot more relaxed and comfortable.

From that point on I’d always fall back on the bag of little rawrs under the bed - there was around 8 or 9 and I realized within the course of a couple of weeks I was out of my stash right after going crazy with them at the end of the semester! So I sheepishly took some money I had saved on the side for some clothes and ordered a mixed case of new ones from tykables

- to my surprise they came super quick. As soon as they came I was wearing them 24/7 for most of a week while I was off for the semester. And of course I was doing a little over correction in how much I was wearing them now that I had a little free time I did realize just how much I loved them as a therapeutic tool for my anxiety. It helped calm me down, made me worry less, and helped me to process things a bit better.

So of course now I’m nearly addicted lol, I wear a mostly at night as the anxiety usually comes at night and stops me from sleeping, but having a nice comfy diaper day once in a while to help me get some work done has also been a treat!

After all was said and done one of my entire sections of my wardrobe is stuffed with diapers, powder and wipes.

As of now I’m discovering new diapers, brands, and at the moment I’m working on my own little diaper bag I can keep in my room to keep a few diapers in and some supplies so I don’t have to pull everything out on my desk from my wardrobe every time I wanna wear!

I'm glad you've got some privacy! My various living situations in college afforded me little privacy, so I didn't get nearly as much diaper time as I'd have liked. I'm 100% with you on the therapy factor. I work from home most days, and my job is one of sudden onset deadlines. I enjoy it, but I'm something of a perfectionist and am prone to second-, third-, and fourth-guessing myself in ways that usually don't make a difference to anybody but me. I've found that working with a diaper and pacifier takes just enough seriousness out of what I'm doing to keep me from spiraling like that, or becoming overly stressed about the deadlines and other things I can't change.

I remember how much I enjoyed being on my own after finishing college, getting a job and finding an apartment to rent where I could express myself fully, wear diapers and rubber pants whenever I wanted and not worry about anyone finding out. I loved to come home from work, pin my diapers on for the evening, change and go to bed diapered. Weekends were so special, knowing I could wear diapers all day if I felt like it. That was when I first started wearing diapers away from home and around other people, even go out to dinner with a friend and have diapers and rubber pants on under my clothes, wet myself knowing I could go home later and change my diapers.

Currently past the two week mark of the semester, been crazy busy. I’ve been sleeping here and there in my tykables, every time I do I have probably the best night sleep I’ll ever get during the week.

I’ve also been occasionally sneaking downstairs in my shared dorm space and doing laundry while padded, or a bit of cooking - even sneaking out a couple times to grab coffee through a drive through on mornings after I sleep in them. 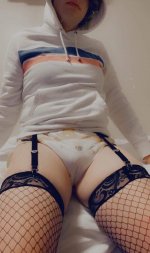