The Rearz Spoiled Safari is the latest in the Canadian company's adventures into releasing their own line of diapers. It's designed to be a very-high end product at a similar price tier to ABU's recent Space Diaper or Fabine's line of products.

I'm reviewing the product in size Large, please take this into account when comparing to other reviews on ADISC.

This product was released in October of 2015. I received my shipment shortly thereafter.


The Rearz Safari has a white background with what the company refers to as an African Safari theme – adorned with cartoon characters, all of which have been assigned names (Griffin the Lion, Zack the Zebra, Marty the Giraffe, Lilly the Hippo, Alex the Monkey, and Johnny the Parrot). The design is mostly white, with foliage and characters taking up around a third of the space. There's a glossy landing zone on the front portion, similar to what one might find on a Bambino product, albeit it feels a bit thicker.

It's a first for an AB/DL diaper company to produce a Safari themed print, with characters to boot and I'd wager it's one of the more "babyish" prints on the market currently. Additionally, the inclusion of animals may appeal to some babyfurs. 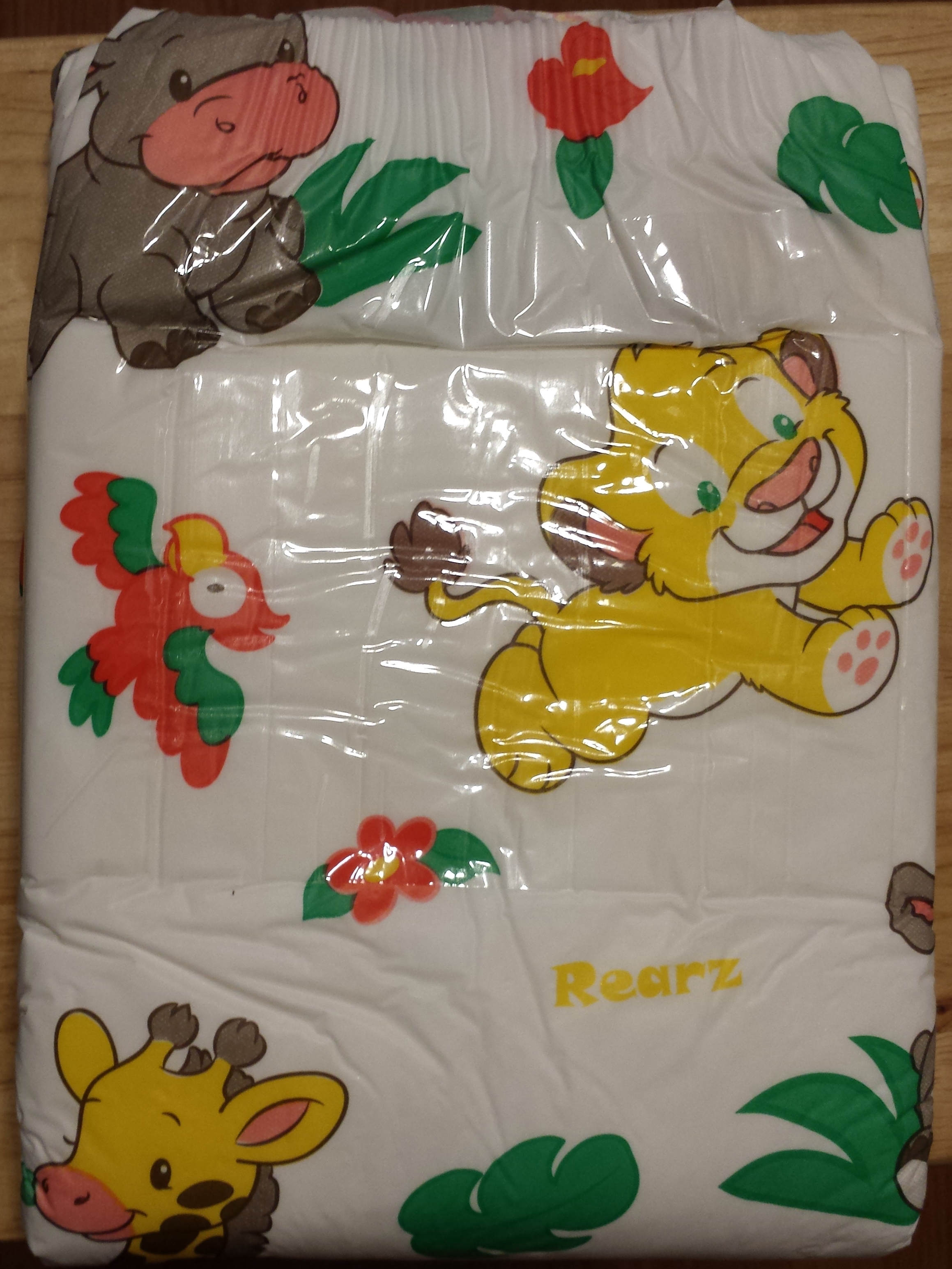 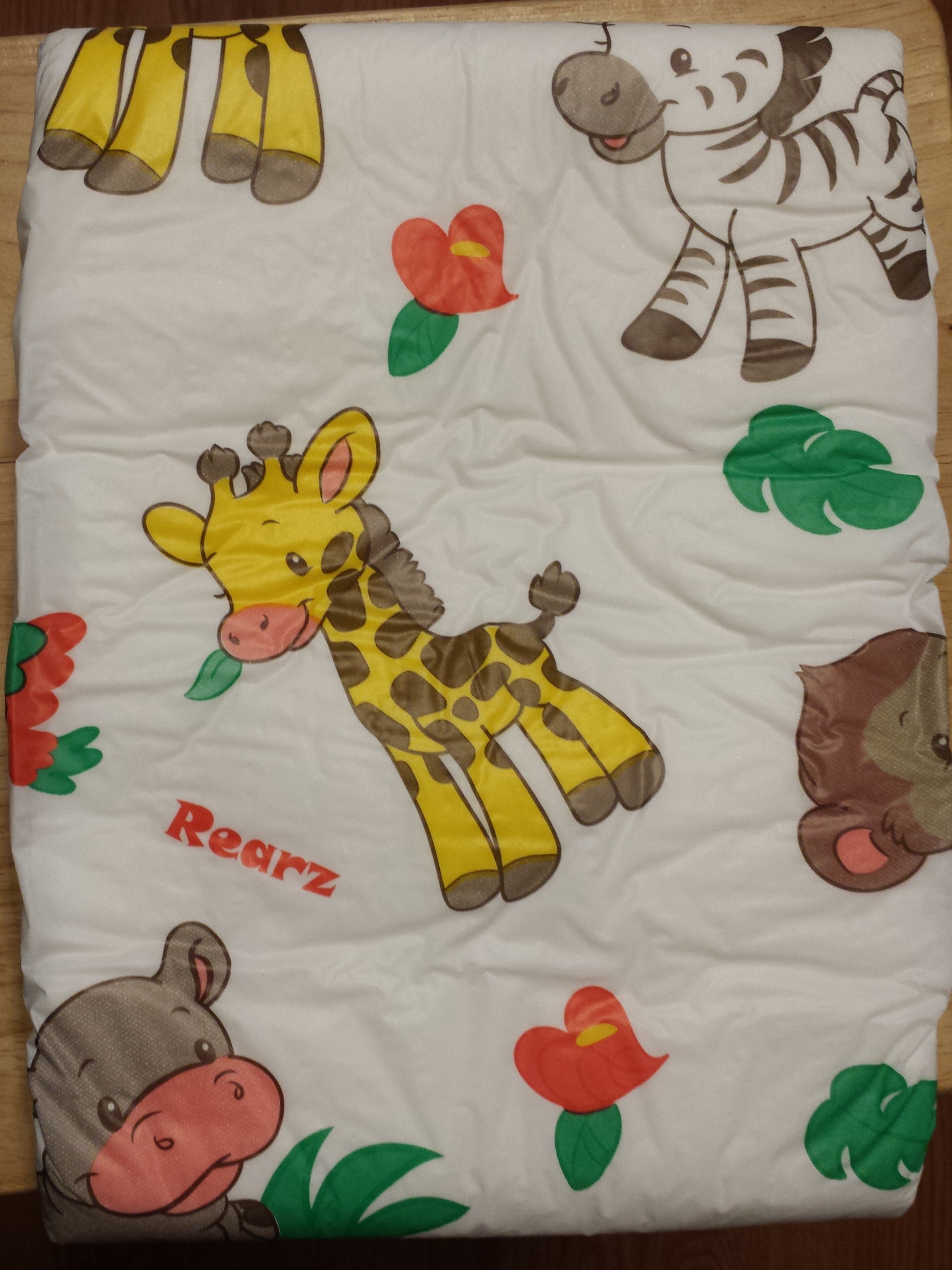 
To test the thickness of the diapers while dry, I removed three from the package, placed them atop one another and placed a heavy (5 kg) book on them and pressed down to ensure as much air as possible had been removed. Together, the three diapers had a height of 5 inches (12.7 cm). This puts them in the same range of thickness as ABU's Space and Bambino's Bellissimo. 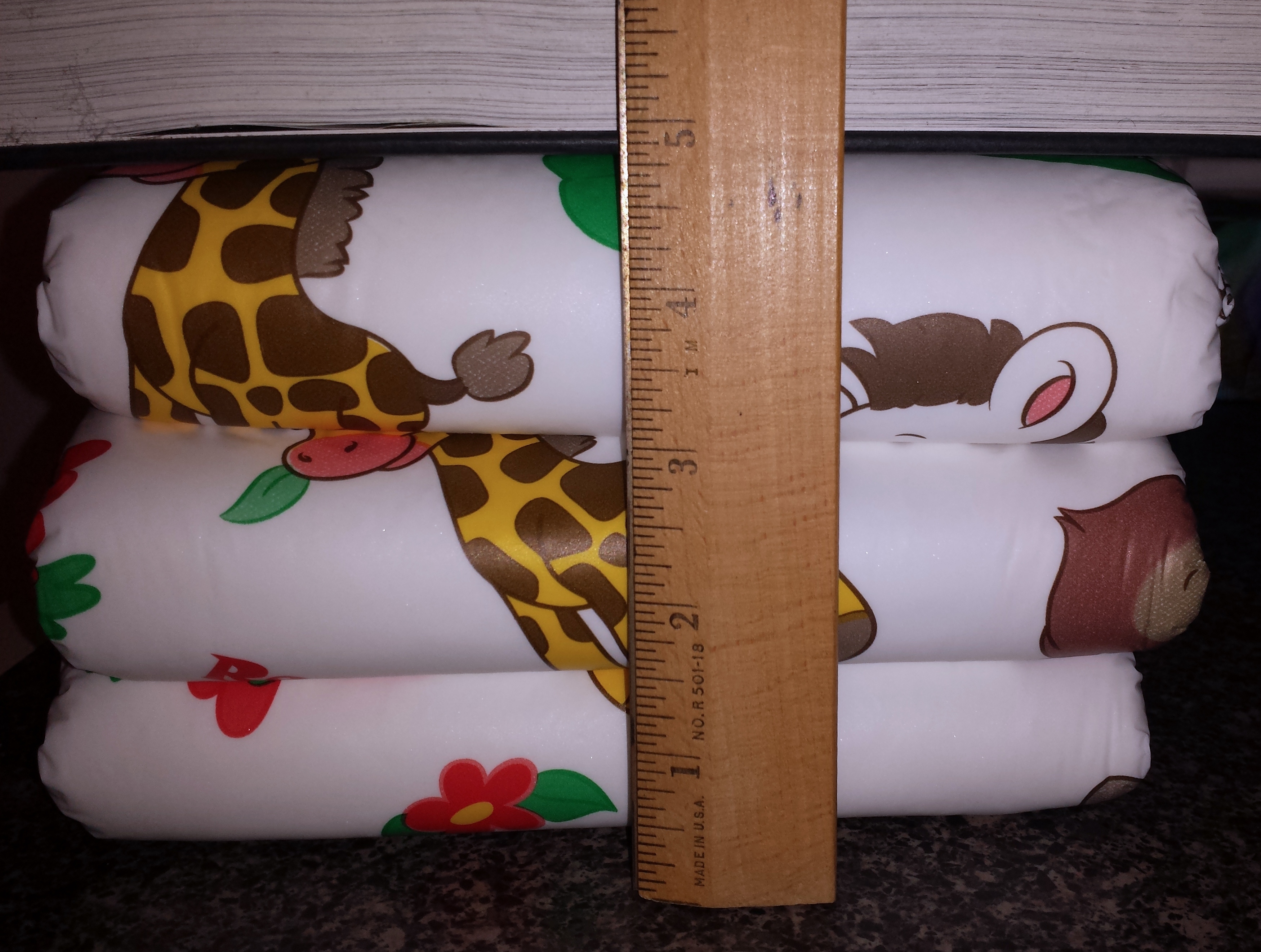 
Rearz Spoiled Safari use the standard double-tape system found on most premium adult diapers. They feature an adhesive-free blue area to grab the tapes for application. They're wider than standard, and stick exceptionally well on first application. Adjustments are manageable, but adhesion takes a hit after a few, becoming problematic around the fifth time. 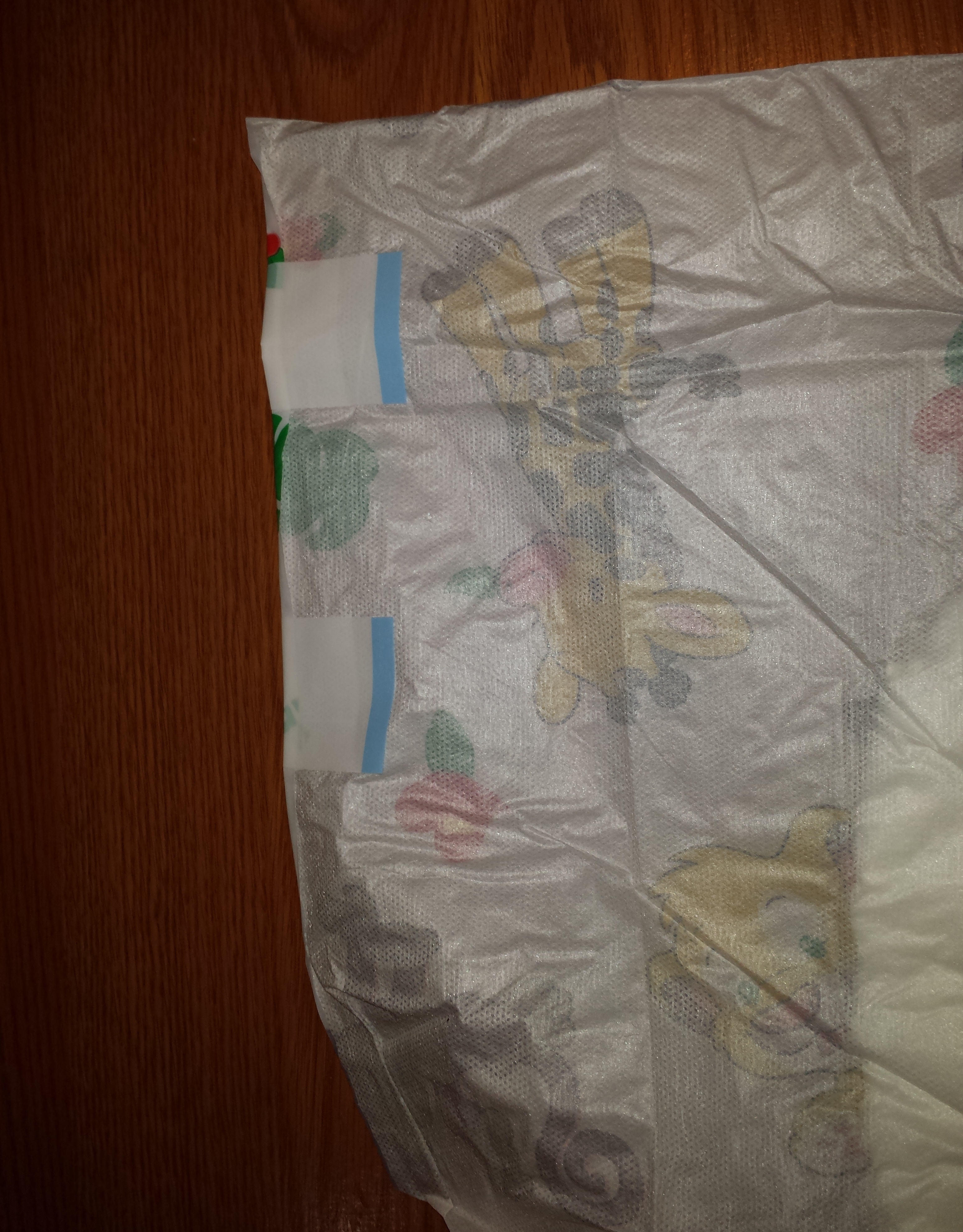 
The plastic backing feels smooth, but retains some texture. Quite similar to previous Rearz products, but a touch thicker I find. The crinkle factor is on the high side of normal.

The inside of the diaper is white, with a blue dispersion strip located in the center. The lining material feels similar to previous Rearz products, with a soft cloth-like feel. The diaper has standing leak guards, as well as front and rear waistbands. 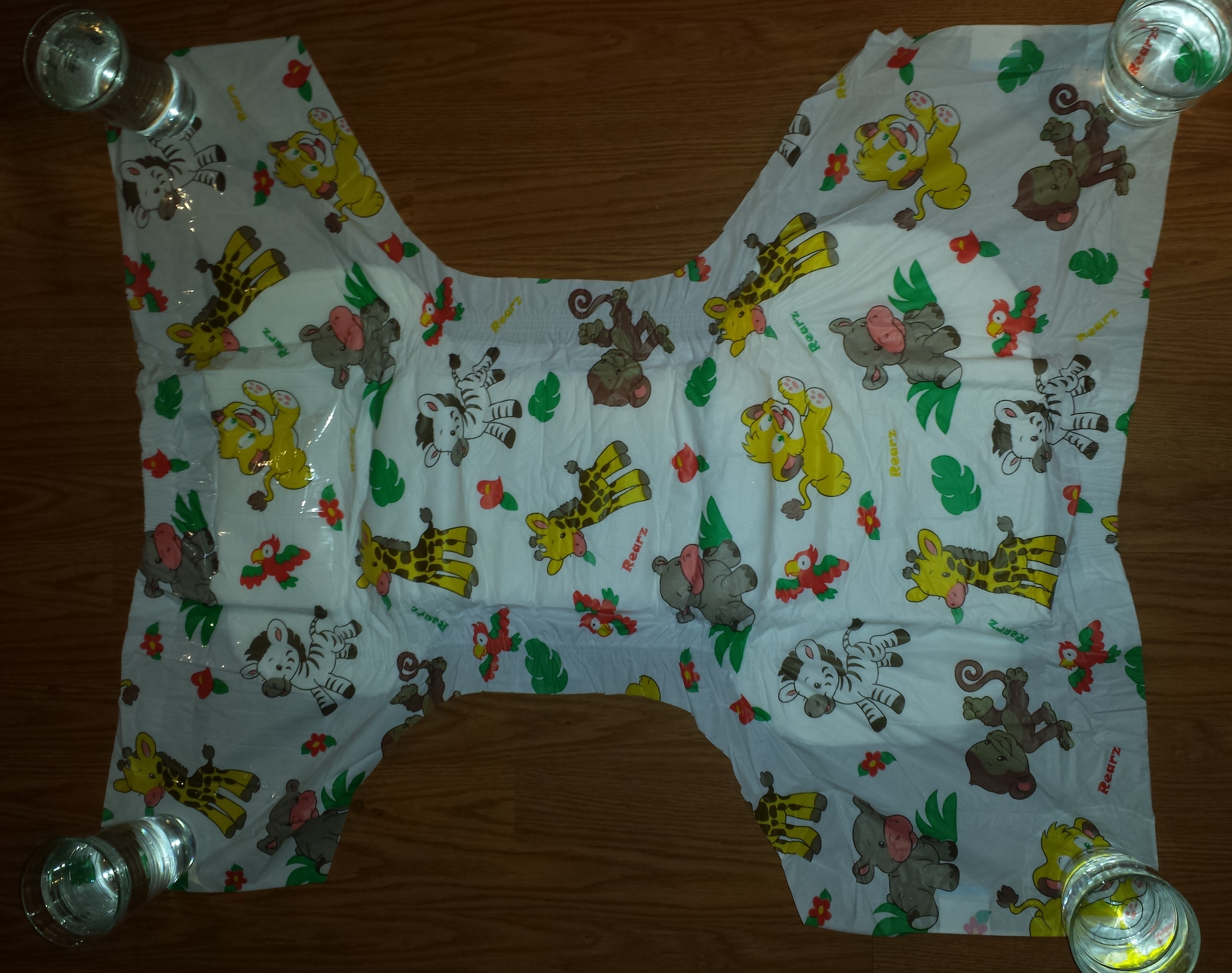 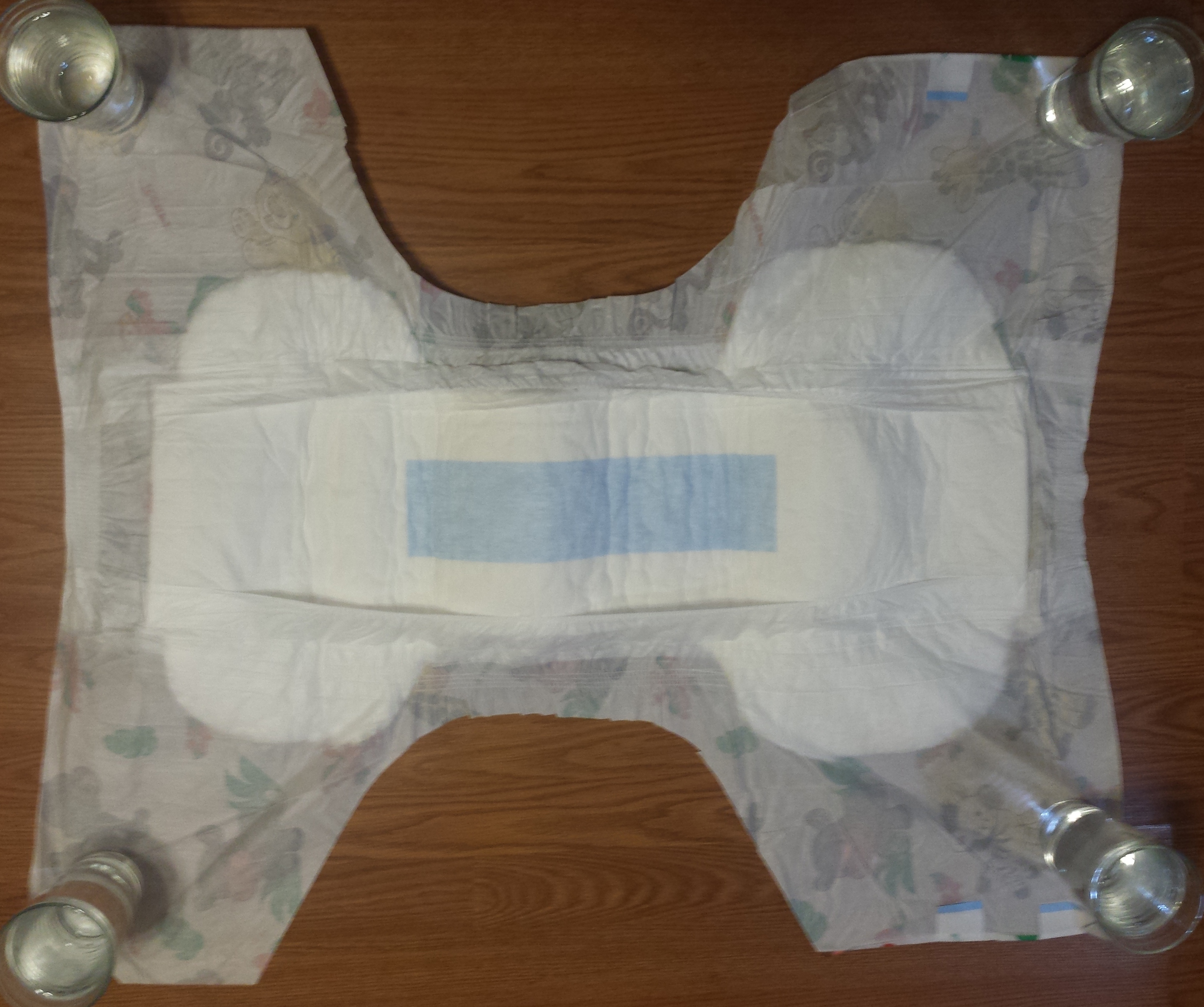 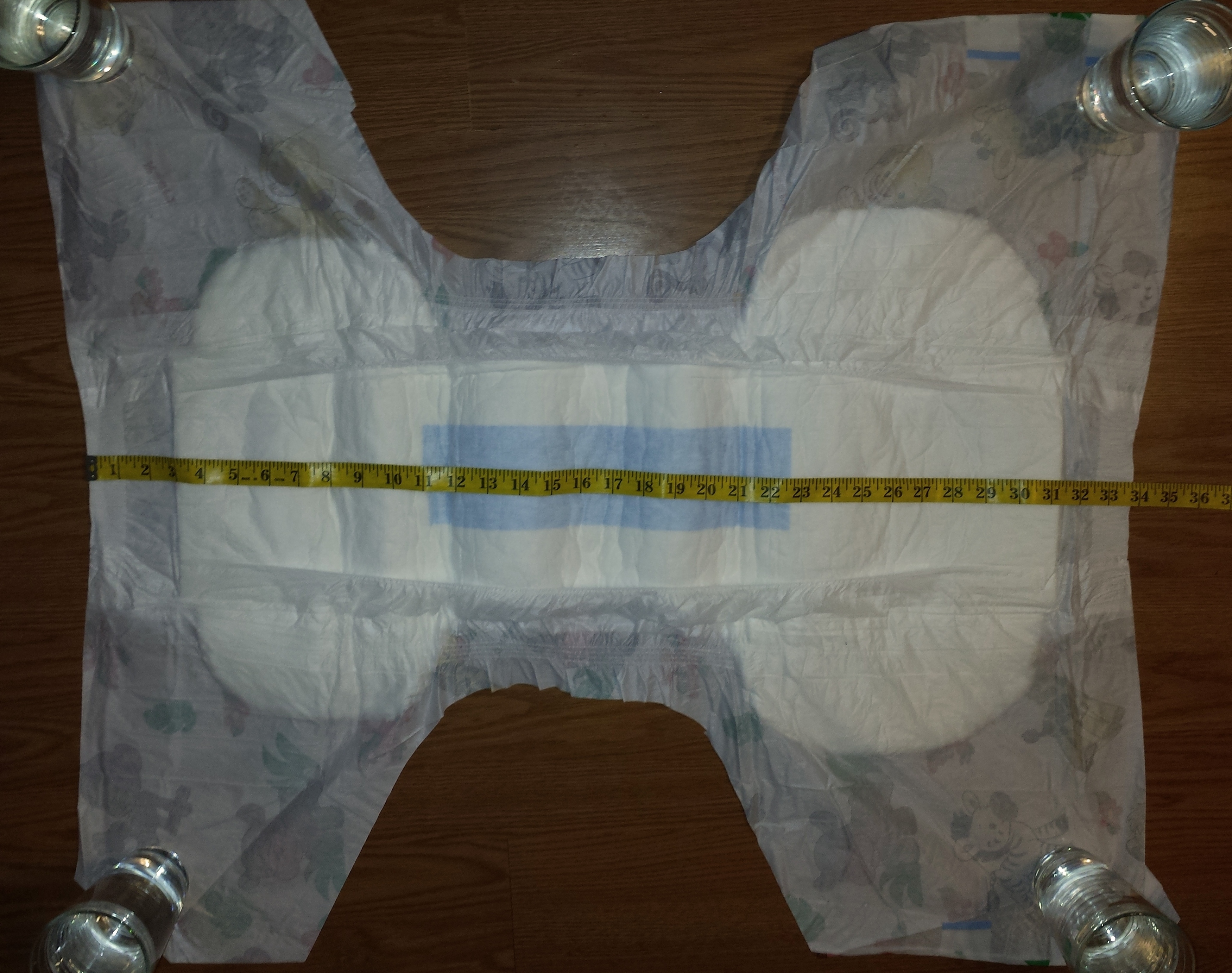 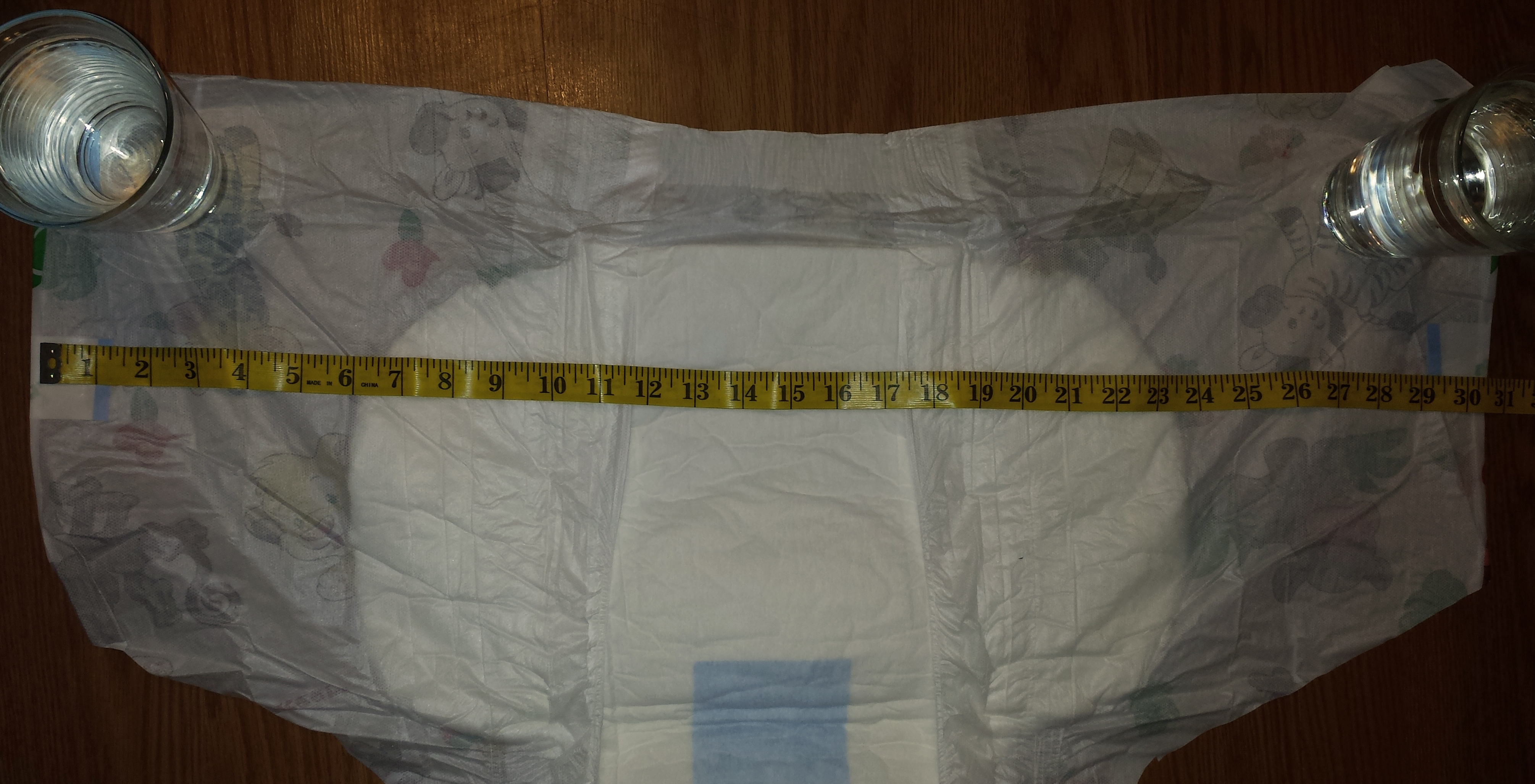 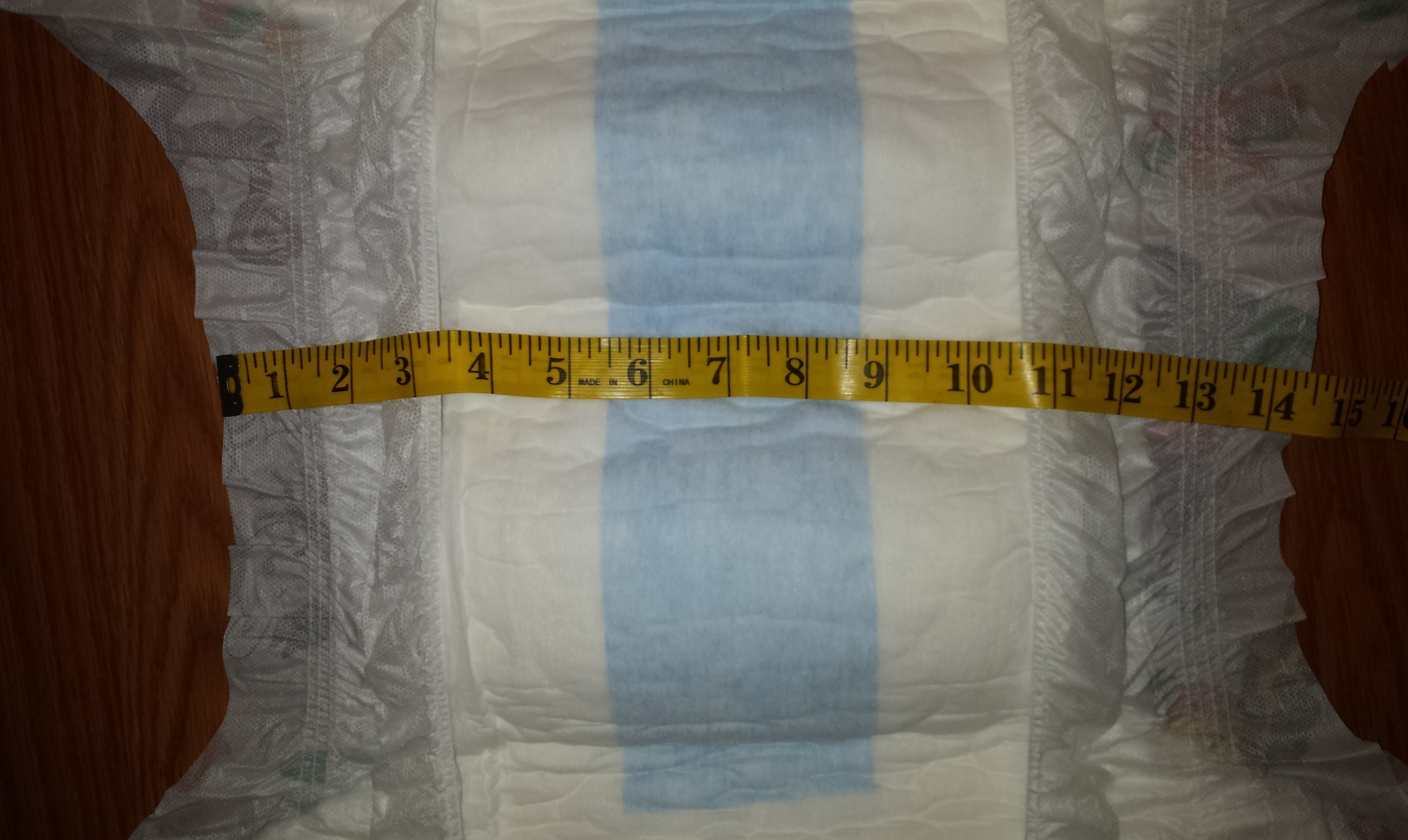 
To test this product quantitatively, I simulated usage with water. I put one on, and repeatedly poured water down the front in 100 mL (just over 3 oz) increments and then sat down on a chair for 30 seconds to allow the diaper to absorb the liquid, keep a consistent pace, and see if it would leak under load. After 1400 mL of water, I felt water moving down the leak guards to the rear. At 1800 mL, I started to feel damp in the rear when sitting. At 2400 mL, water started to pool. At 2800 mL, I felt wetness overcome the standing leak guards when I sat down and small amount had leaked out, so the test was concluded.

After the test, I measured the diaper and it was around 4.6 inches (11.7 cm), almost three times its dry size.

The is the highest absorption I've seen in a diaper, and I'd wager it swings at the same weight crate, as ABU's Space diaper in the same size, if not slightly better thanks to its wicking capability being aided by the transfer strip in the crotch. Following suit with the competition, the tapes were surprisingly robust, only allowing the diaper to sag ever so slightly at the end, meaning the days of duct tape for diapers may be numbered. I would argue that this is indeed a top-tier diaper, worthy of resting in a class shared by very few competitors.

Dry Diaper Next to Full Diaper after Qualitative Test


To gather qualitative data for this review, I put on a fresh diaper and carried on about my day. The diaper lasted around 11 hours, with nine small wettings (under 3 seconds) and five medium wettings (between 3 and 8 seconds) no heavy wettings, or "floods" as some call them, took place. At that point, it was evident I was soon to leak (and frankly, really wanted to change), so I ended the test.

I have a 40 inch waist, which puts me in the ideal range for most large products, with the exception of Dry 24/7, which I fit in a medium and Abena, which I fall into the awkward size gap between medium and large. The fit was exceptional, quite thick and notably wide in the crotch. It fit about the same as a Bambino product, but was slightly longer and thus rose up higher on the waist.

Again, the tapes were resilient and were the least of my worries. Build quality appears to be top notch, and stretching was a non-issue on the backing. As stated before, the diaper was on the high end of normal for crinkle factor. It is fairly flexible, and moves with you quite well.


I bought a case of 30 of these from Rearz for $99 CAD, putting them at $3.30 CAD each. With the current (as of Nov 19) exchange rates factored in, this puts the diaper around $2.40 USD each. It's a bit higher than some competitors, but still well within the range of acceptable prices in Canada. Once shipping and foreign exchange fees are accounted for, Rearz seems to have a slight edge for pricing for Canadian customers over other premium brands.

The product is not available to non-Canadian consumers through localised suppliers as of yet. For US customers, there is a flat rate shipping program in place ($36 USD per case flat rate, currently). For the EU, ABDLFrance is slated to carry the products in the near future, for Australians, Littles Down Under also has a shipment due soon. For other nations, shipping is available but is rather costly.

This is, by far the best diaper I've ever had the pleasure of wearing. It's outperformed other products by leaps and bounds and has reliable tapes and quality control. It's quite comfortable to wear during everyday tasks since it is not very stiff, and it has a plastic backing that feels rather resistant to accidental puncturing. Given the pricing in Canada, I would argue it is the best bang-for-your-buck premium AB/DL diaper for the region.

My only complaint might be that it is devoid of the latest trend in AB/DL diapers, cute wetness indicators (think fading stars or aliens). That said, a fairly minor complaint.

I'm confident saying this product belongs in the "super premium" category Fruitkitty coined in his ABU Space review. It's a very positive development for Canadian AB/DLs to have a world-class product being sold by a Canadian company.
Last edited by a moderator: Nov 30, 2015

I love this diaper hold so much and so thick
F

The plastic backing on these is so delightful. My favorite plastic texture of any diaper I've tried.

The Rearz safari without a doubt outperforms the ABU space diaper. Tried both under the same conditions, at work, the ABU leaked in the crotch area between the legs, which the Rearz safari didn't. I kept track of fluid intake, output frequency and volume.

I would like to add my own 2 cents to this diaper review, and that is the relative size of the print on Rearz Safari. The print size is HUGE! Most printed ABDL diapers use print sizes that would be found on baby diapers, however, when placed on an adult size diaper the print then appears relatively small on the diaper. The Rearz print size is relatively large on the diaper, making Safaris look overall proportionately more like a real baby diaper. An added touch that I love!
F

I love the safari diapers as well but I keep having issues with the tapes on them. I had ordered them back in November of last year shortly after I had ordered their princess diapers with a tape problem. Prior to that I had ordered both without an issue. Again, this issue started with Princess diapers, but we are talking about the Safari here. When I found that the problem had been migrated to the Safari, I contacted Rearz and mentioned it. I was told that perhaps I was using the wrong size etc. Finally, they issued me with a credit note for further purchase. I waited 6 months between orders and finally last month decided that (AFTER ABU had mentioned issues with tapes) that Rearz may have changed as well. Guess not because I am having the SAME issue again. Medium Safari tapes start to "slip" off then come off completely. I am at a loss. I suspect it is an issue with the tape landing zone. Also, I have found that for diaper checks, you cannot do them back up.

Anyone else having these issues. I love these diapers, and so does my G/F. So much that she ordered me a Safari onsie, that I LOVE!!

I'm wearing a Rearz Safari right now, and while I really like them, I also had issues with the tabs. But I always seem to have issues with sticky tape tabs. (I prefer velcro)

Excellent review! Wearing one of these right now but I haven't had much problems with the tabs.
J

Great review. My father has been using them for a pretty long time and as he is pretty much a big guy, he only used those big ones to not look funny, at least that's what he told me and I saw that the market for large diapers is a bit limited. I have tested them yesterday and gotta admit they were really comfortable. I stole a bit from my father's without his knowledge I Hope he don't mind. I'm pretty tall and quite, so they have fit really well. I didn't have any problems with tapes as well. I have really enjoyed reading this review, keep them coming!

i like these diapers, however the bottom right tab always pops or slips off. ~shrugs~ i dont know why. the only thing i dont like is the tapes. its a decent night diaper.

I do love the rearz safari. Rearz do make top quality nappies.


Little2Roo said:
I would like to add my own 2 cents to this diaper review, and that is the relative size of the print on Rearz Safari. The print size is HUGE! Most printed ABDL diapers use print sizes that would be found on baby diapers, however, when placed on an adult size diaper the print then appears relatively small on the diaper. The Rearz print size is relatively large on the diaper, making Safaris look overall proportionately more like a real baby diaper. An added touch that I love!
Click to expand...

I agree definitely the perfect nappy for us ABDL's

How is the sizing compared to other top tier diapers? Do they tend to run large or small in comparison? I’m right in the middle of the simple medium and large and would love to give these a try if they are close, or run a little big. Great review, by the way!
Share:
Twitter Reddit Pinterest Tumblr WhatsApp Email Share Link
Top