The Rearz Safari is one of the earliest Rearz prints on what has been their base model of diaper for several years, and was originally released in October 2015. Rearz is a Canadian online retailer of both ABDL and non-ABDL diapers and incontinence supplies which has drifted over the years into increasingly catering to the ABDL market. They both sell directly to the US, but with either pricey international shipping or a fixed subscription service option, as well as distribute through a wide number of US-based resellers.

Rearz sells this diaper in a variety of other prints, including the feminine-themed Rearz Princess, an all-white version called the InspirePlus, and an all-black version called the Rearz Seduction. The all-white and all-black versions are sold cheaper than the printed versions. At various times, Rearz has also released other prints including Rearz Spoiled and various single run prints.


The Rearz Safari has transparent packaging with a printed panel partially filling the front and back of an otherwise clear package. The panel is mostly text with the diaper's advertised features in English and French, with the animal characters from the print scattered around. 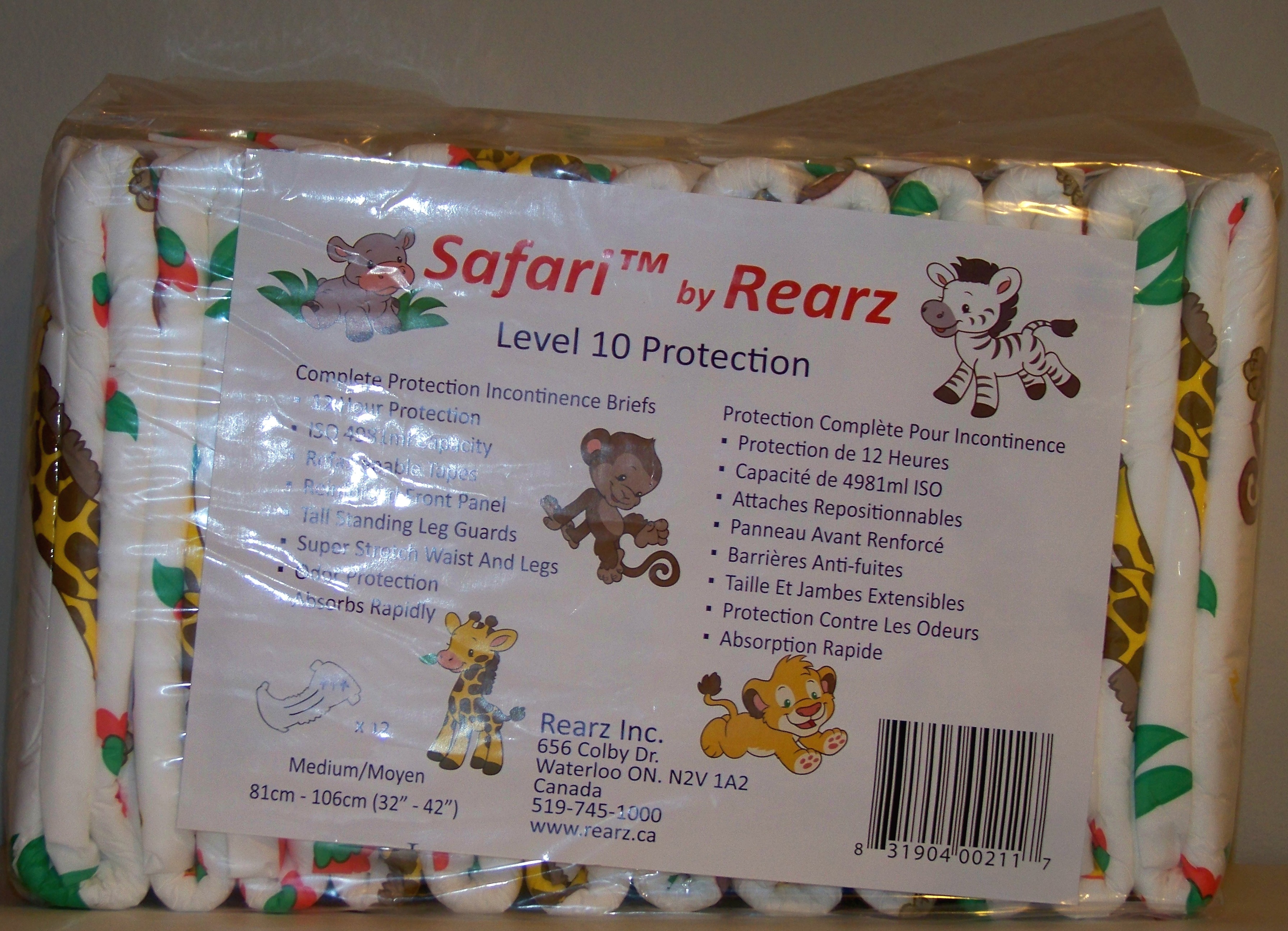 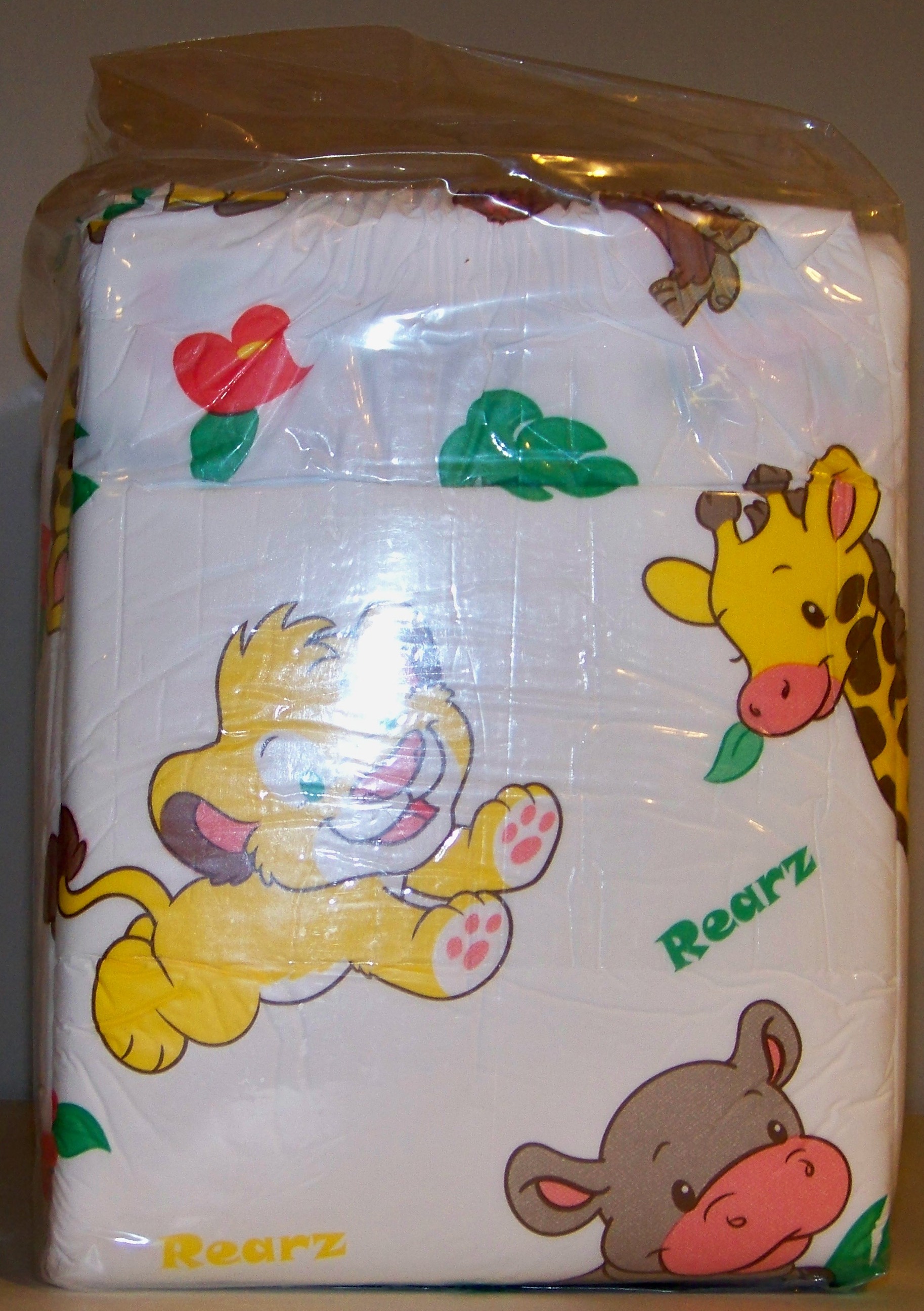 The Rearz Safari has an all-over print consisting of a pattern of shrubs and very large safari-themed animals, including a hippo, a parrot, a zebra, a monkey, a giraffe, and a lion. When it was released late 2015, all-over prints were relatively new in ABDL diapers, and this was among the first to launch one with an animal theme. Beyond being an animal theme with cute animals, I'm not sure that I can envision this design on an actual baby diaper as simply an all-over print with no other patterning, but it stands as a reasonably babyish motif.

The outer plastic has a solid, slick feel to it. 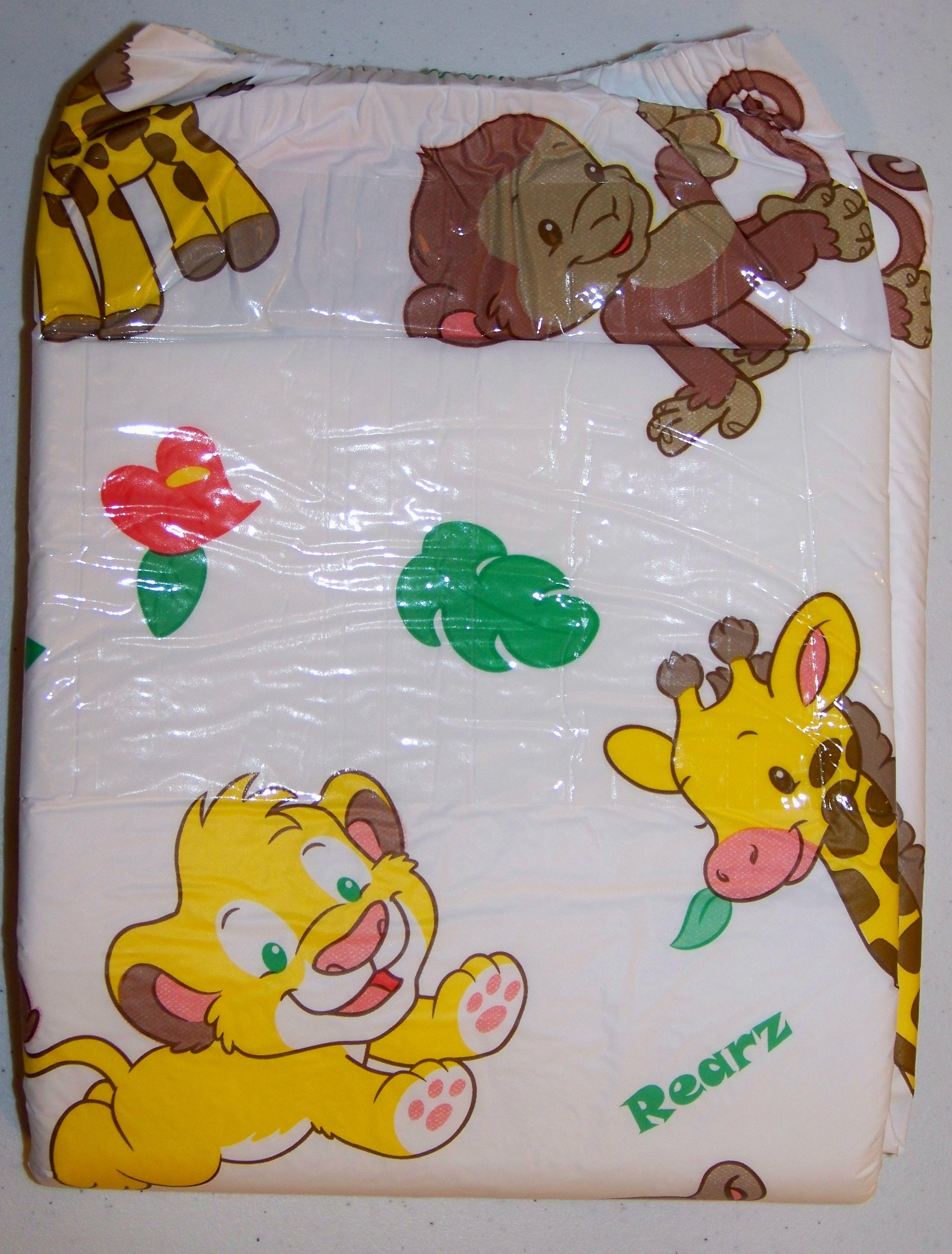 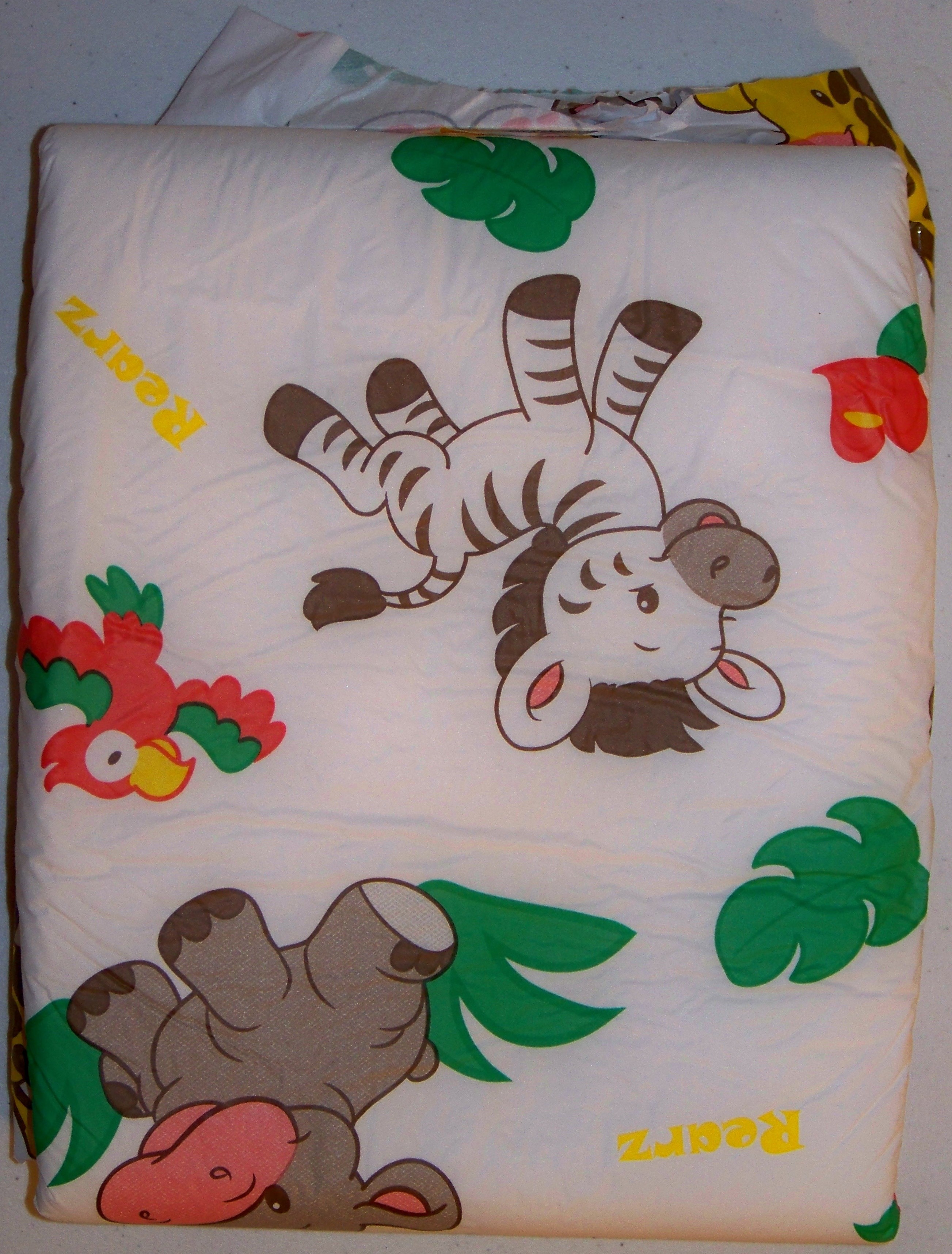 
To test their dry thickness, I stacked three diapers on top of each other, placed a heavy book on top of them, and measured their height. Together, the 3 diapers had a height of approximately 10.6 cm (4.2 in). Thus, the dry thickness of a single folded diaper is 3.5 cm (1.4 in).

The Rearz Safari uses a standard double-tape design with tapes that measure 4.1 cm (1.6 in) wide each. 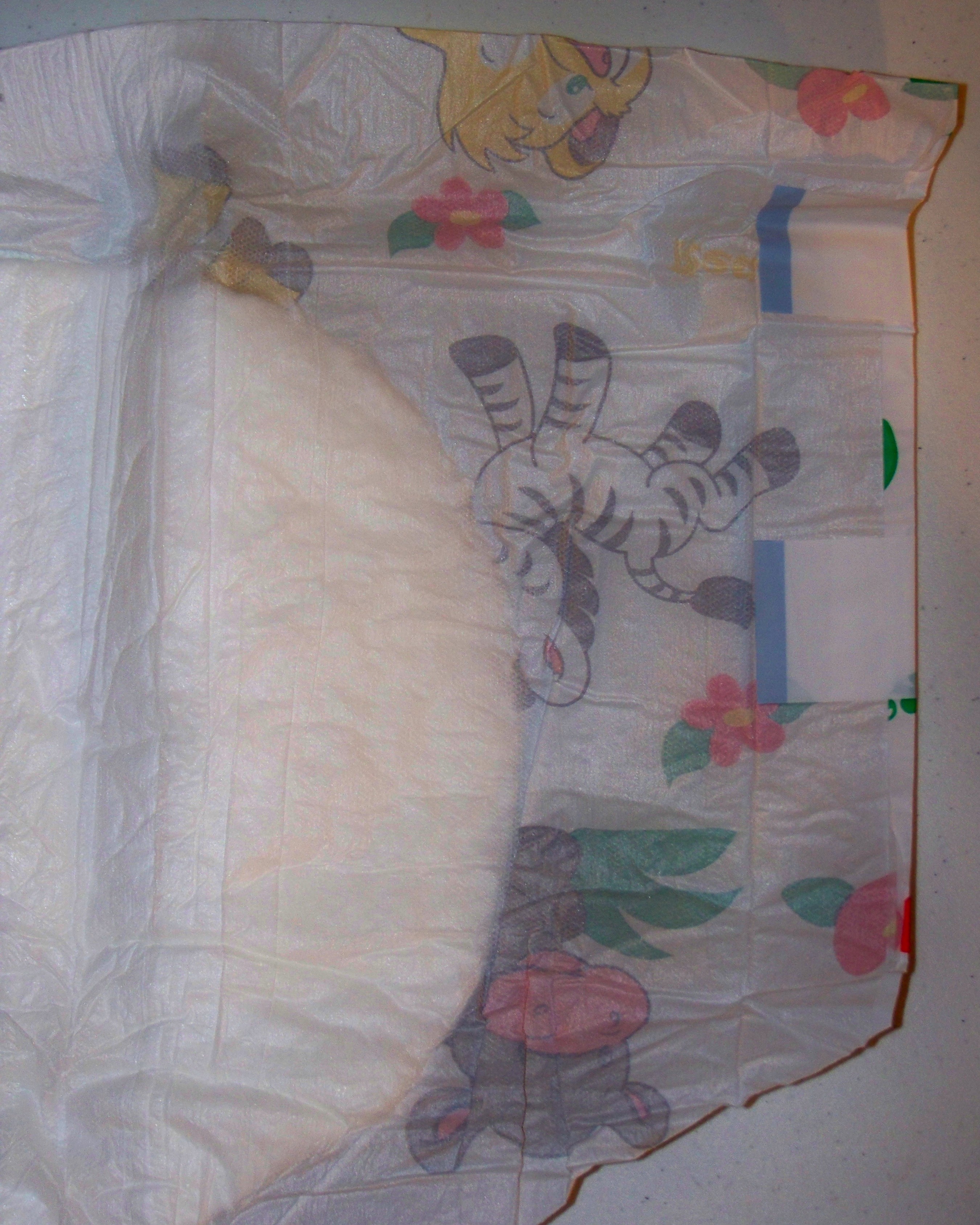 
The inside of the diaper is white with a blue rectangular pattern offset towards the back. The padding is arranged in an hourglass shape and feels soft and cottony. The diaper has standing leak guards. It features elastic waistbands in both front and back. 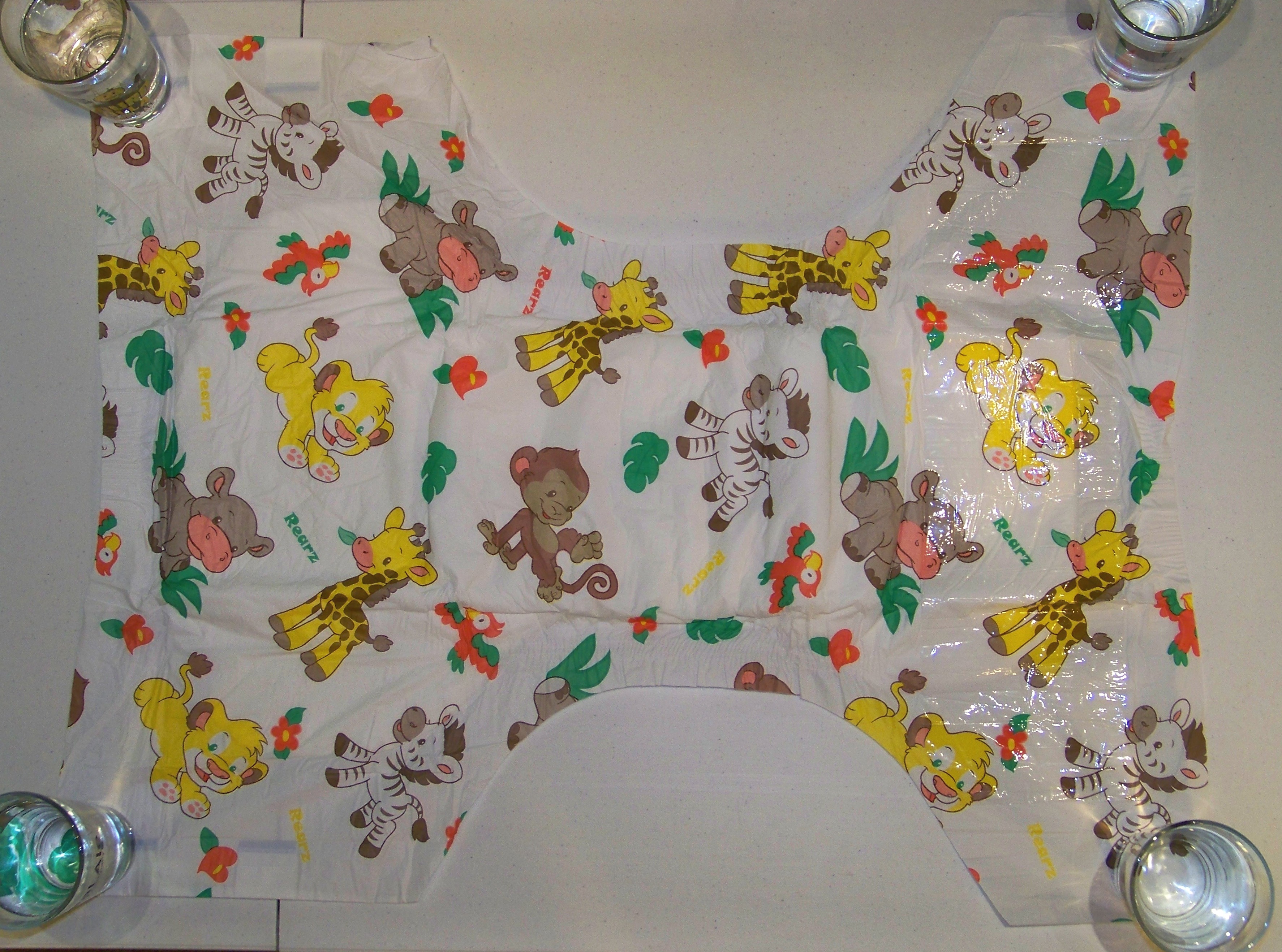 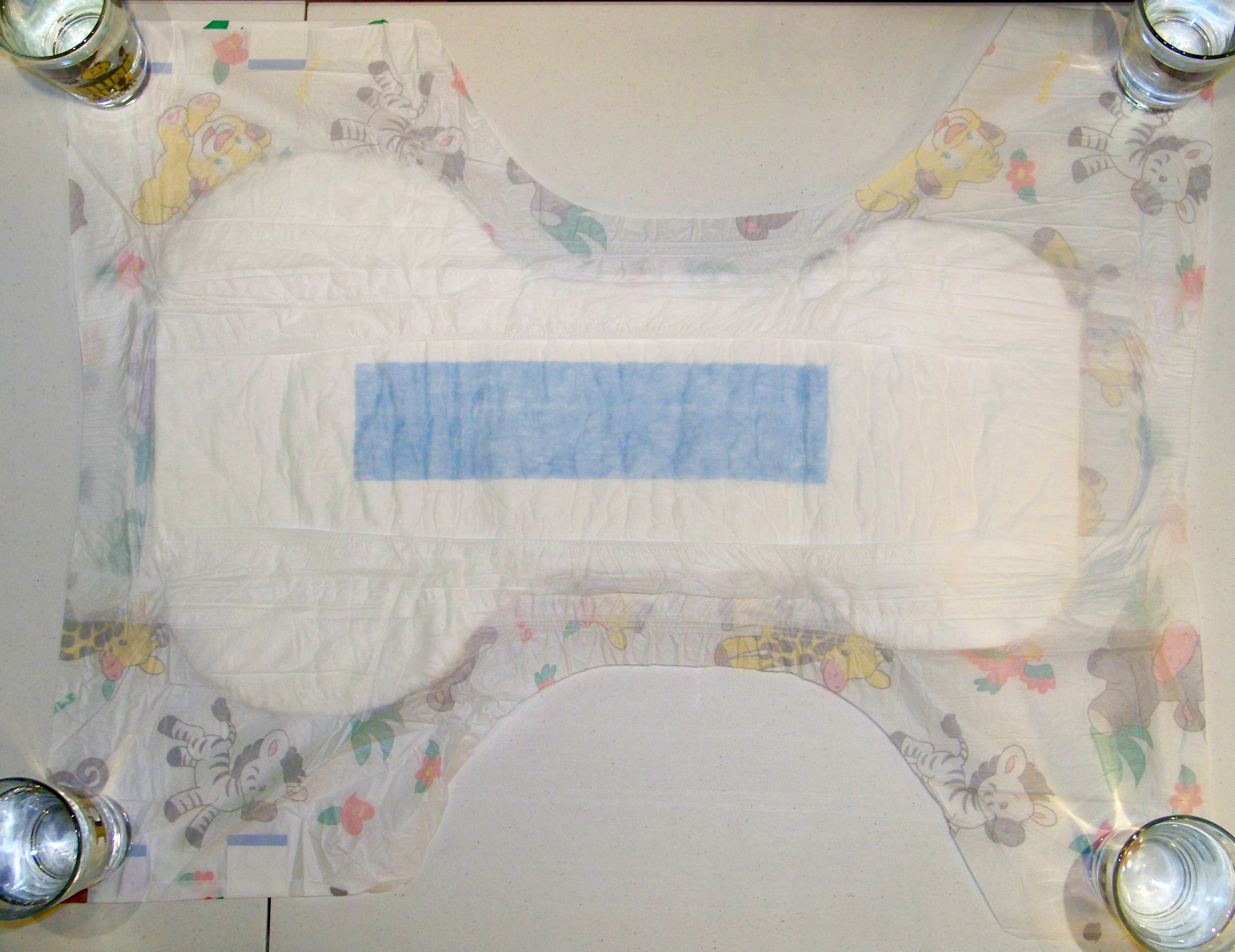 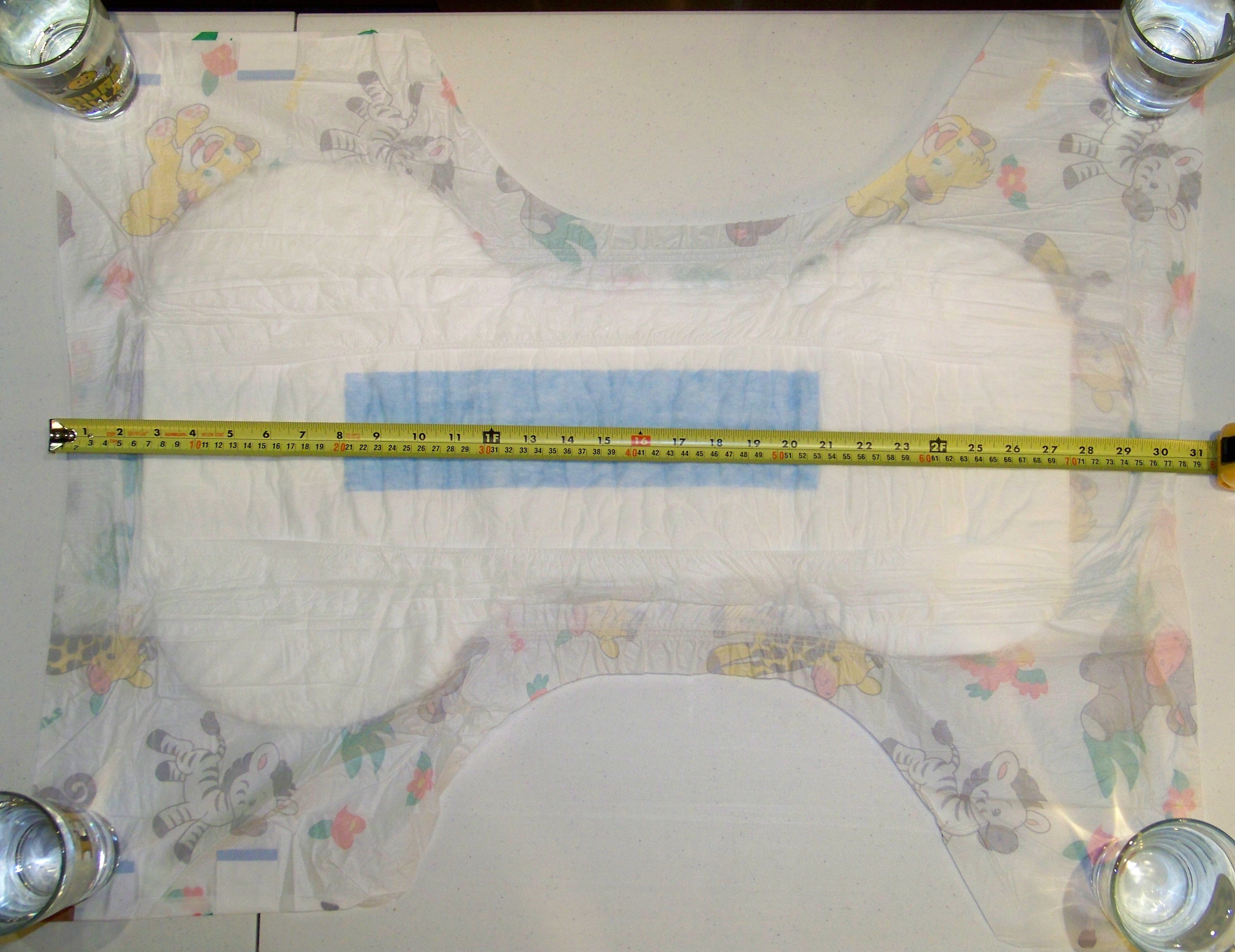 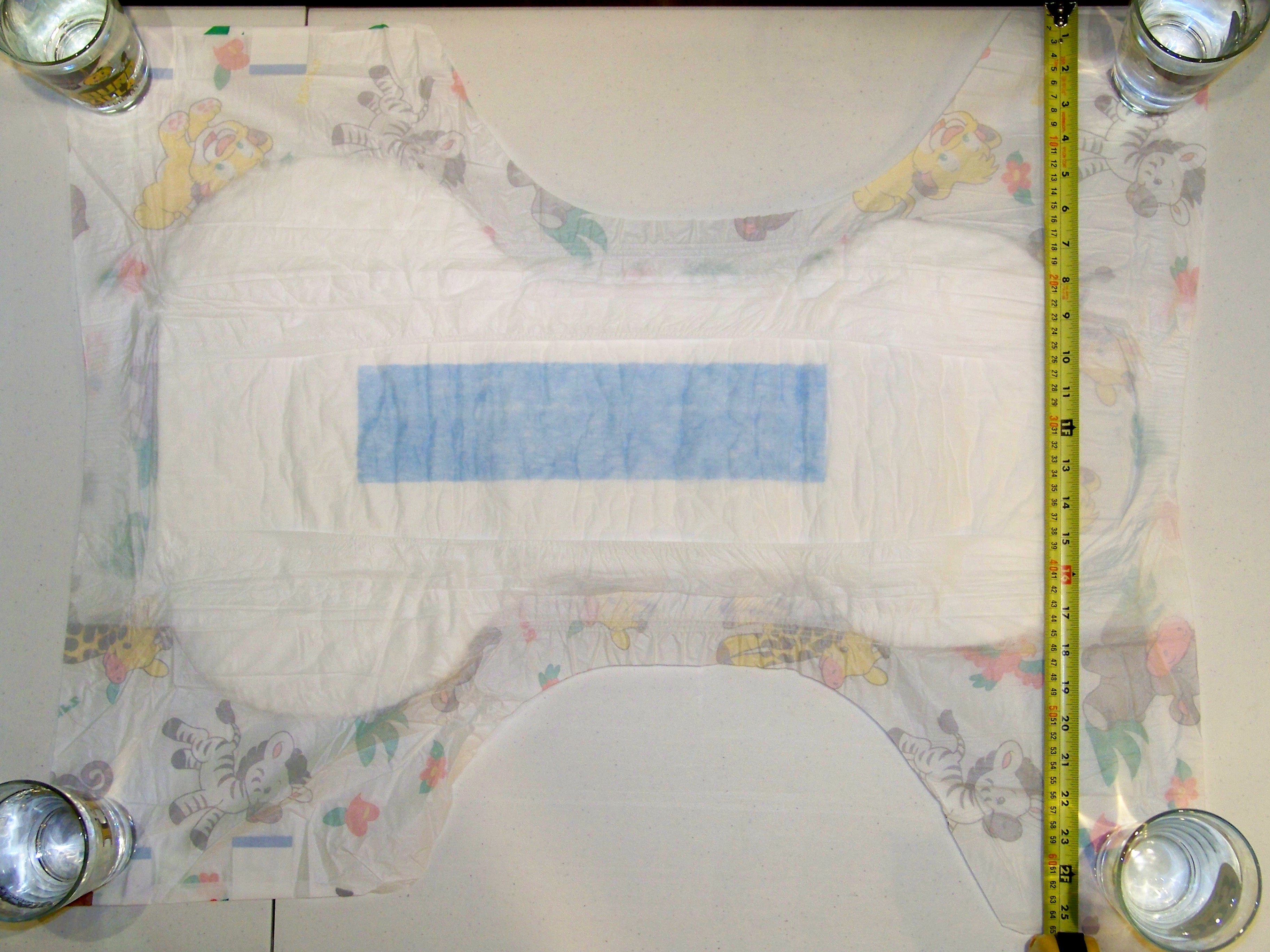 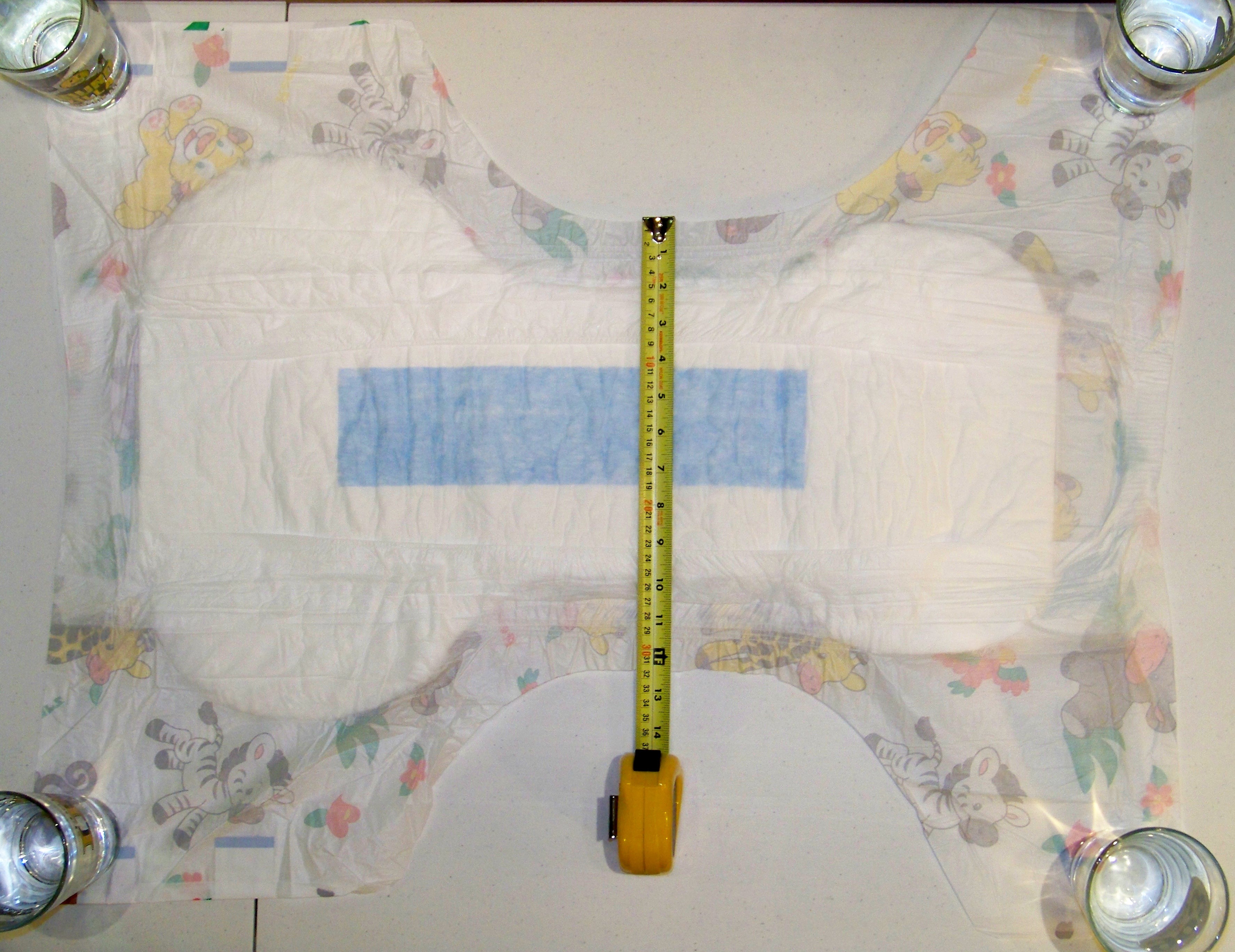 Over 3 replicates of this H2O capacity test, the Rearz Safari averaged 2405 mL with a standard deviation of 103 mL.

I folded the diaper back up to compare its thickness to a dry diaper. It had expanded to roughly 11.4 cm (4.5 in), about 3.2x its original size. The tapes did not move at all throughout this test.

The average dry mass of this diaper, based on 6 replicates across both tests, was 221.5 g with a standard deviation of 3.0 g.

I weighed and put on a fresh diaper and wore it while going about ordinary activities. The diaper lasted a total of 8 hours before the tapes shifted and eventually popped, at which point the diaper also leaked on a flood. During my test, I had 3 wettings and 2 floods, and recorded a change in mass of 820 g, or about 5.1 half-floods, which is within the range of my test results.

With a 36" waist, I am in the middle of the listed size range for the medium Rearz Safari. I normally wear size medium in other diaper brands, and this diaper seemed to fit well.

I did have issues with the tapes on these first shifting and then popping given enough time and physical movement, though the held for the more limited period of my quantitative test trials.

I bought a pack of these diapers for the purposes of a review from https://bambinodiapers.com/, one of the US distributors for Rearz products. Prices vary across resellers and sizes, but at the time of this writing, Bambino had the best price I could find for medium Rearz Safari at $13.50 for a 2-diaper sample, $42.00 for a 12-diaper single pack, and $110.00 for a 36-diaper case including shipping. Prices are generally lower for the identical but all-white InspirePlus and all-black Rearz Seduction; the best case price I could find for those products was $94.00 for a 36-diaper case.

At the case size, this works out to $3.06/diaper and based on my test results this diaper holds 1.9 "half-floods" per dollar. The all-white InspirePlus and all-black Seduction work out to $2.61 per diaper and 2.2 "half-floods" per dollar. This price is high relative to the competition, and with a middling capacity, these Rearz products are of somewhat below average efficiency in price for capacity. I've been told anecdotally that Rearz products are generally better priced relative to the competition in Canada, but as someone reviewing these as purchased the United States, they are clearly behind the curve.

Rearz products are solid diapers and test similar in at least the water test to most other companies' top products, and have in fact been stated in various places to be made on the same line as ABUniverse's LittlePawz/Space/Simple, but with some different choices of materials. The main problem Rearz products face is that they're badly outmatched in the US on price, though they also lag in adoption of improved tapes and, in my personal opinion, the cleverness of their available prints.

At the time of this writing, Rearz has found itself embroiled in several community controversies, and I anticipate that readers will either expect that I mention this or will comment about them anyway if I do not. I've been in the community long enough to be around the block a few times, and there have been past issues surrounding manufacturers that have led me to refuse to write a review on the grounds that a review could amount to free publicity to company that was acting egregiously. In those cases, I had a lot more evidence of actual bad faith over mere incompetence and/or poor decisions than I do thus far about the recent Rearz controversies. Therefore, I am choosing to still review this product, as always, purely on the merits of the product itself.

On the merits, it's a good but expensive diaper for what it is, at least if purchased in the US. If you like one of the Rearz prints, they are solid diapers, but you currently pay a heavy premium for their prints versus the competition.
Last edited: Mar 1, 2018
J

how loud are these, by chance?
J

The review said that Rears has "found itself in several community controversies." Could you please elaborate? What did they do?

lol yeah we should have a decidable meter for the loud crinkly factor. but nice review it sold me
B

They’re fairly loud. I personally really like them. Like all diapers, I have noticed differences between batches. Such as tapes or absorbency characteristics. Overall they’re really good. As far as the controversy, it had to do with rearz attempt to copyright the term adult baby or something. They had a long reason why they wanted to do it, but it caused a big riff among the community so they abandoned the idea. If you can, I’d recommend giving their product a try though. It’s a bit higher priced but I feel worth it. The new clear tapes work very well.
H

I just opened a new package of Rearz diapers today that I'd ordered from Bambino diapers about a week ago and noticed that the absorbancy listed on the package seems to have dropped from over 5200ish to what's shown on the package photos in this thread. The previous time that I ordered them would have been last spring. Is this a correction or are they going cheap on us?

edit [I can't find the edit button today somehow]: Based on this thread's test results, https://www.adisc.org/forum/showthread.php/97352-Rearz-Spoiled-Safari-Review-(Large) the absorbancy may have dropped. It could just be that the other thread was reviewing the large size though. Can someone get to the bottom of this?

They are probably just being more conservative about what they put on the package since here https://rearz.ca/safari-nighttime-briefs/ it lists both numbers in a range. I'd still like to get someone to confirm this though.
H

Update: I have not noticed any issues after wearing them for a while so I think they just standardized the packaging.
H

These diapers are super absorbent and fit me well so very I'm glad I found them. I can get through a typical day with just 2 of them (1 for the morning, put on the previous night before bed) and one for the rest of the day after I poop. I'd recommend trying them, though their large size is a bit bigger then ABU's large size so it depends on your body shape.
M