i want each and every one of you to petition your government to bring back playgrounds such as this retroCRUSH: the world's finest pop culture and Leo Sayer website
kids these days are missing out on the beauty that is the classic playground now kids have this: 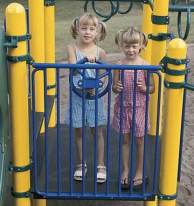 look how bored they are!
so this i ask of you. make sure your congress/government/tribal leaders know that we need the old skool world of playgrounds back! oh and make sure they build bigger ones for adults or we'll become the playground bullies and make the funner, more dangerous ones ours!
S

Hey I like it a lot . today's playgrounds are not very good compared to the old ones. but then again you can find almost every playground in my area hasn't been updated for as long as I can remember and I think that playground looks fairly normal really.

One playground *improvement* I've always lamented is with the swings. The old playgrounds had swings with top bars about 11 to 12 feet off the ground - high enough for a fun swing arc even for us adult kids. The new replacement swings, more often than not, have a lower bar maybe 7 to 8 feet high. Not much more than the backyard kiddie swings purchased at places like Toys-R-Us. A few pumps and kicks on them and you've quickly maxed out your arc.

I remember the first elementary school my daughter went to. They had both high and low swings in the playground. Wouldn't you know it, they took down the high bar swings and left the low. I loved swinging with her on them when school was closed before they were ripped out.:frown:

It's in part because the US is a litigation-happy country. Nobody wants to leave any chance that they could be accused of negligence by having a swing too high, or other playground equipment that someone might blame for a kid being seriously injured.

Also.. some older equipment is dangerous. A girl at my elementary school was killed when she rocked a slide over and it fell on top of her. So, proper maintenance is a must as well.

I loved those swings, the swing set at my aunt's and the set at my old house had something like that. Anyways I just like normal swings and hand bars (for doing pull-ups) now. Also those marry go rounds are fun but too much of it can make a kid dizzy and throw up due to the sensation. Not to mention the thing a few years ago where someone tied a cable to one and the marry go round and someone hopped on it and fly to their death. I think the person driving accidentally hit them.

So that means they are getting pulled so no one can do it anymore. Sand is getting pulled since kids throw it at each other and it gets in their eyes. Not to mention it gets everywhere else too if you like it or not. Anyways I love most of those things but with today's age its all "I take steps to remain safe so I can reach my death safely". Then you got soccer moms who cry and %&()$ about every little thing that goes wrong.

Anyway I prefer the new park stuff. The old stuff is great but if its really a matter of safety then I am for change. That's not saying that I don't want to see these things go. Its mainly that I don't want to see the government get their ass sued since Billy and friends decided to misuse the park items which leads to broken bones or death. The government would be paying them with the tax money we give them.


Also my local park by my house has swing sets that are pretty high. I'll get a picture of them park is like 3 blocks away. Its crazy fun to fly up like 10 feet. Also if this is all about safety we aren't all swings built like the "baby/toddler" swings with the leg holes. I know it will be hard to climb in and out of but hell its a lot safer. (And yes that was the AB in me talking somewhat)
W

Its all about the liability up here in canada. When I was in school we had a larger 2 - 2.5 foot diameter tube that would swing forwards and backwards and side to side 8 inches either way. Once a day someone would fall off the top which was 8 to 10 feet high. Pretty much the only fun thing was to try to crawl through or run across the top while your friends swung it in different directions.

Oh we also had a zip line at our elementary school. Not to many accidents on that one but its been pulled too.

Well It may just be my city but our parks haven't changed much in equipment. All of them have been rebuilt, yes, but they basically look the same as they did before, just with different colours and new stuffs. The swings are the same, the slides, the jungle gym etc... The only new piece of stuff we got was the cup swings, which are uber fun to play on. And we have a few specialty parks for special needs, but that's it. And to be honest, that park just looks dangerous, not fun.
D

I love it! One thing I've noticed about the newer playgrounds is that the equipment is getting smaller and smaller as it gets more and more plastic-y. The idea seems to be to push out older kids and just make playgrounds for kids 5 and younger. Meanwhile, the older kids gravitate towards video games and other sedentary activities and childhood obesity skyrockets.

The ultimate playground when I was a kid was one at a park about a half hour's drive from my house. The drive was worth it. This playground had a tunnel you could climb up, a climbing rope, a bumpy slide that I badly bruised my tailbone on (but it was worth it!), lots of swings and other goodies. A close second to this, though, was the one closer to my house that had a 30-foot high twisty slide that left black grease on your shorts. And yes of course it was 300 degrees in the summer, but when you're a kid and it's 1990 your mom buys you a Sprite and packs some peanut butter crackers and it's all good. Now both of these playgrounds have been replaced with plastic crap no good for anyone over the age of 4.

I am pleased, though, that playgrounds like Kids Cove in Virginia Beach are becoming more popular. This place was built when I was 10 and I got a couple of years of use with it before I decided I was too old and cool. I'd love to go back. Now those are playgrounds that burn up some energy.

Likewise, pools are becoming way too regulated. You can't just dunk people anymore. The Washington Post had an interesting article about this the other day. The apartments where I used to live boasted that they had a "resort-style pool" but the damn thing was four feet deep at its deepest point because they didn't have a lifeguard.

I've seen all the local playground become less fun... and less wooden! It's all metal now!

With all this playground talk, I just recalled how we used to make the metal sliding board more slippery when we were kids. Tear off a sheet of wax paper big enough to sit on and slide down on it. After several trips down on the wax paper the board will be slick as can be and offer a really fast ride down with little to no drag. More dangerous? Possibly it could be, but you could still grip the rails for braking if needed. More fun? Absolutely!!!:smile:

I was checking out a neighbourhood playground today...just in passing (okay, I didn't really pass by 'cause it wasn't that close to where I was coming from/going to)....anyway...I mostly was checking out the swings! They looked to be the old-fashioned really high ones...with the sling-seats (fit any size bottom) :-D I didn't really take note of any of the other equipment...maybe I'll have a look next time I'm by that way.