What kind of phone does everyone have? I'm guessing the majority of people have a cell phone...I have a blue Krazr >__> (Too many phones to make a poll)

i am the only kid at school i know that doent have, or want a phone. for a couple of reasons. one, i hate talking on the phone, so why should i carry one with me. two, my dad calls constantly, so when i'm not home is the only time i can get away from the phone. and i can't afford it.

I went into my nearest O2 shop, and asked them for their cheapest phone. It was £20.

I think it's a Nokia. It has many features: ringing people, texting people, snake 2, alarm clock. I think that's it.

I hate all hi-tech phone stuff, I don't see the point. I almost considered buying an IPhone, but decided to get a classic and this cheapo phone instead. It was cheaper, and the IPod is better too.

A phone is for ringing and texting, and maybe for playing snake 2... I'll pass on anything else. 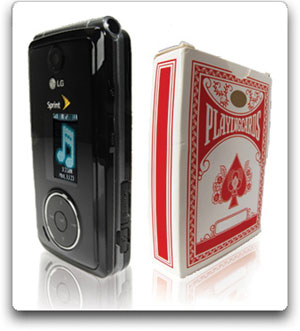 Don't need one. Mainly, I can't afford one.

Everyone above the age of 12 has a cell phone these days. It's a stupid, useless fad. I've seen a lot of people get addicted to their phones, and completely freak out when it breaks or they lose them.

We've survived without cellphones for a long time, so why does everyone these days think they need one?

I had a razr v3xx till it broke

Everyone above the age of 12 has a cell phone these days. It's a stupid, useless fad. I've seen a lot of people get addicted to their phones, and completely freak out when it breaks or they lose them.

We've survived without cellphones for a long time, so why does everyone these days think they need one?
Click to expand...

People don't need them...But they do come in handy...I hardly see them as a fad though

Basic Samsung flip phone I got for $30 a couple years ago (on contract)...it's been really solid and survived multiple drops, drunken-throwings, spills, and sitting in my pocket with my keys and change. But it's also basic and doesn't do much more than phone calls and texting, and a daily used alarm clock.

EDIT: Forgot to add, it also gets great reception

I've got a cheapo depot nokia phone. I have "new ATT." We've been with Cingular for quite awhile cell-phone wise, and home phone we have always used..that company that bought ATT.

At a time it was southwestern-bell, then SBC, then they bought ATT. Though, as we all know, they kept the name ATT instead. Dunno why I went on the short little rant. I guess a bit of trivial info for those who didn't know.

We're actually ending our home phone though. We're going to be just cell phones. We just use them for phone calls, no texting or anything. Sometimes I use the camera, but just so I can have a pretty new background. I don't think I will ever really text either. We always have a hojillion rollover minutes, and I'm pretty sure we're still using some from a year or so back.
Last edited: Apr 9, 2008

Oh and in response to Happy Lurker;

For $33/mo I think it's a great convenience to have a cell phone. Maybe not at age 12 (Hell, I didn't get one until 2 years ago when I was 21 ), but for anyone over say the age of 16 who has a part time job or something to pay for it I think they're great. Also I'm moving out next month and probably won't get a land line phone since everything I do is through my cell phone now anyway . So it's not like I'm spending a ton more money to have a cell.

Oh and if mine breaks, I'll go in and get another basic Samsung phone as they seem to be near indestructible

i agree with charlie and happy lurker. cell phones can be kind of annoying. i avoided getting one until a few years ago, and i leave it at home unless i know i'm going to need it for something.

i got it to take with me on a road trip, so it's got a pre-pay plan with free long-distance ("nationwide whenever minutes!"). it'd probably be cheaper to sign up for a more standard plan, but i'm too lazy to change over. it's some sort of a nokia, t-mobile thing. i don't use it for anything except calls, voice mail, the alarm clock, and occasionally texting. i still have an address book that i write people's phone numbers in, and i've seen enough people lose all their contacts when their phones crash that i don't think i'm ever going to change that.

I own a Sony Ericsson k700, which I bought a few years ago to replace my bricktastic Nokia 5110. I only use it to make short voice calls, as an alarm clock, as a camera... and for playing Tetris on. :3

Don't really like mobile phones, and I really don't see the point in spending much money on them or replacing them regularly. That said, I should probably get another one soon, though, since mine loses battery charge really quickly and has been fully submerged in water in the past. >_>

As for me: I own a MOtorola RAZR - heavy as a brick and older than 2 years, but it does its job.

It's not all that.
I'm thinking of getting one of those walkman phones so when I'm working or waiting to go home. I'll play some of my tunes. Plus has better picture quality too.