I'm aware we've already got a topic a few pages back about old cartoons we used to watch, but I figured we could start afresh.

Just now, I've ran across a youtube user who has a bunch of old commercials, trailers, and shows that I remember from back when I was a baby / kid. So, I guess I'll post them here.

This thread will have lots of youtube links, be warned!

Play School, probably the only show on TV that doesn't feed you bullshit. "The block is blue!" Holy crap, simple, no bullshit TV. The female host, Benita Collings, has been on that show for 30+ years. Australian families owe a lot of money to Play School, since it babysat kids for half an hour 2 times a day.

Man, I remember this ad. Nowadays they replaced the people with Puppets. gawd. >_>

Another commercial I remember. sure, it might not mean a lot to everyone else, but it brings back nostalgia to me...

http://www.youtube.com/watch?v=YIiPVcgSW0U
Cheez Tv was the shit. Sadly, in retrospect, it was just filled to the ass with ads to make kids buy shit. What's up with Ronald McDonald?

God, that chick scares the shit outta me.

MTN Kids Club.... this was the shit where I live (everyone knew the address PO Box 13000, Portage La Prairie, Mb R1N 3V3) , but really it was just cheap local content between cartoons. Now I have the beginning theme stuck in my head

Oh and here are some 'not-for-kids' outtakes that leaked onto youtube years after the tv station was bought out...

God, why isn't good stuff like this on the air anymore? Kids don't know what awesome is anymore...

I've nostalgia of a lot of cartoon I used to watch when I was around 5 y.o.:

these were aired During Early morning
Back from school I used to watch cartoons like:

I cant forgot other cartoons and "The power rangers!"

Also some spot. I remember the spot of Crystal Ball and some candy.


More recently Some cartoon that cannot be aired on tv Like Sailor Moon.

Aggro is absolutely the best! I love that montage!

Also, I used to love Alvin and the Chipmunks!

I am almost seven years old. There is so much in the world yet to learn, so many responsibilities to undertake. To me, there is little more than the long, arduous days at school, listening to Mrs. Luzriaga teach writing and arithmetic. At school there is a laminated A just above the blackboard, tattered from years of being taped up and then torn down after another class moves on. There is a cartoonish worm – smiling with teeth that worms do not actually have – sticking out of the apple in the middle of the picture. I stare at this apple and wonder what dentist does such great work on a worm’s teeth. I qualify this dentist as an artist in my mind, for if even this worm smiles after his procedures … he must be a saint compared to Dr. Berg. I would like to go to the worm’s dentist.

I trundle home off of the school-bus. I bound down the stony driveway, dodging fallen leaves and kicking aside gray stones. My backpack slaps up and down against my back, filled with books and paper, but most importantly, the hidden pleasures of Teenage Mutant Ninja Turtle action-figures that I can look at and show to my friends when the teacher is not looking.

That day, I sit on the floor in front of the television in our dingy basement, waiting for my favorite show to come on. Chip N’ Dale: Rescue Rangers never disappoints me, and I am more than willing to do homework prior, just so I can have the chance to watch it. Numbers and math fly in front of my eyes. I scribble down spelling words spelled wrong. I get my assignments done just before the title-song, and when it comes on, the world means nothing. Chip and Dale – clever and comic as they are – are all that matter; Monterey Jack is all that matters, witty and brave and lovable; Gadget is all that matters, for she was my very first crush in that cute jumpsuit and with those adorable little ears; they are all that matter to me, the Rescue Rangers, and to come home from school and watch yet another episode … it is pure and indescribable bliss.

That was the day I was introduced to the Cuckoo Cola Cult.

Almost nineteen years have passed. Nineteen long, rewarding, sad, invigorating, educational, busy years. Johnny Cash is dead. Joey Ramone is dead. Yeltsin has been replaced by Putin. Two generations of Bush have lived at the White House. The Twin Towers have fallen. Ronald Regan has passed on. Phil Collins is no longer cool. I have grown, graduated, considered college, worked, considered college, worked, and then finally chose to return to college. I am a writer of music and prose. I am a young man living out the beginnings of his life while watching every day pass on, wondering how I could do it over better, more efficiently, in whatever means wastes less breath. Adulthood is regret. But yet, there is one thing that calls out to me.

Come along, sings a little voice in my head, you belong, feel the fizz of Cuckoo Cola.

For almostnineteen years, I have hidden the secret of the Cuckoo Cola Cult inside of me, locked away like a retarded amputee in its redneck father’s basement, too shameful to let but a single ray of light shine upon it. I sing the song; I sing the song to others; I lament. The song took hold of my brain the first moment I heard it, and for years I have trounced about, humming it, singing it, praying that one day it might come back to me, that I might hear it once again and rekindle my love with it and join in union with it again – my voice, its voice, Cola Love and grape and orange and cherry. I search the Internet, but I cannot find it. Day in and day out, I yearn to hear that one song just one more time …

… until18 years, 5 months, 22 days later … The Cuckoo Cola Cult comes bursting back into my life. It has been nearly seven-thousand days since our last meeting. I am still faithful.

Indulge yourselves. 6:20 of the second episode is where true happiness can be found.
Part One

And remember: You don’t need the Cuckoo Cola Cult to belong!

with alven and the chipmonks, i still have the space one almost memorised.

other than that, i'd say tom and jerry. it's not as old as some of the others mentioned, but it's still the best.

another cartoon i loved was the addams family.. but i have no idea how to add youtube links drectl, as well as scooby doo and captain planet...

for me however anime ddnt come into my life until ABOOOUT..year 3 i dont think...

I used to have such a crush on Trini / The Original Yellow Ranger.

Ok, I know this isn't really stuff you'd normally watch as a kid, but anyone who used to watch YTV (the Canadian equivalent to Nickelodeon) will remember this being played on commercial breaks:

I just noticed some friends of mine joined a facebook group about this video lol...
A

Playschool was the only tv show I watched as a kid religiously. I was still watching it when I was 7 because I loved making the stuff on there. Good educational fun tv.
I must admit I watched Cheese TV and Cartoon Connection. Wasn't allowed to watch tv in the morning so recorded it and watched before bed. So many ads its pathetic. I'm so glad my parents were poor so I couldn't ring up for all those competitions I wanted and couldn't buy the stuff I wanted. Would have hated half of it when I had it but it's so easy to manipulate kids minds.
The worst ad was this ad that was of this plane and they made it look like it flew. My uncle bought it for me and I was devastated that it just stayed on the ground and rolled around. My uncle ended up making a remote control plane from scratch (minus the engine which he bought... he's an aeronautical mechanic/engineer) for me but I never flew it cos I went past that stage and he gave it to another cousin.

I loved Sonic. Saturday mornings on channel 10. Saturday Disney was the bomb as well. Darkwing Dark and the like. I hated Micky and Pluto and all the oldish cartoon characters.

Humphrey and Barney were so crap as well. They were my mortal enemies when I was a little kid. Only liked Bert and Ernie from Sesame Street too.
Wow, I just realised how little tv I watched as a kid compared to my cousins.

Rance said:
I used to have such a crush on Trini / The Original Yellow Ranger.

Shes dead!? How did she die?

I actually used to think she was hot, when I lasted watched it at like around 8 years old.

Eclipse said:
Shes dead!? How did she die?

I actually used to think she was hot, when I lasted watched it at like around 8 years old.
Click to expand...

Rance said:
I used to have such a crush on Trini / The Original Yellow Ranger.

Heheheh. Still, I had one of those crushes on the pink ranger. woo-hoo! 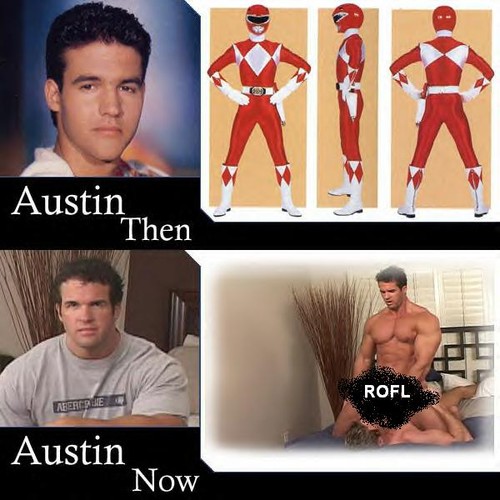 Heheheh. Still, I had one of those crushes on the pink ranger. woo-hoo!

He should still wear the red ranger suit

andysetra said:
He should still wear the red ranger suit
Click to expand...

I was gonna say the same thing...

I know this thread a bit old, but not too old yet!

Anyways thats a shame she died. Driving scares me sometimes, I have a lot of close calls sometimes with pretty much every time it being someone elses fault almost creaming me into a pancake. Be careful out there driving everyone.

Also I can not believe they got away with that racist show. The things they teach kids these days. I saw some docuentary where they interviewed kids, I think it was actually the Tyra Banks show lol, but when they interviewed them they asked them some racially provoked qeustions and they almost always answer with racial answers, it was horrible.
F

Wow, thank god someone posted this topic so I can tell one of my funniest stories!

So, Junior year of high school we learn about the different effects of Nostalgia and all of that in english since it intertwined with Alice in Wonderland and some other books. In effect, we had a test short after.

It was extremely quiet during the test since it was the beginning and no one was done when out of no where the most idiotic girl I have ever met screams out in the most barbie girl voice:

There was a HUGE pause and everyone started looking around the room in a "you got to be kidding me" kind of expression. And as as soon as I had the moment I started cracking up so hard my spleen felt like it was going to explode. Even the teacher laughed, and this teacher seldom laughs. It was so funny.

>.> sorry if I deviated from the topic a bit

I miss The New Adventures On Whinne The Pooh. The good ones from 1988-1991 I think. Disney has not put them out on DVD either was totally sucks.

I also miss reading Calvin and Hobbes in the sunday paper. I saw the whole collection of Calvin And Hobbes on sale at Costco one day it costed like 65 bucks and it felt like it was 30 pounds! It was all bound in leather and all that jazz. I would of LOVED having that.