The NorthShore Supreme is the plastic-backed variant of NorthShore's new line of diapers.

The NorthShore AirSupreme is plain white with a yellow wetness indicator line and product/batch information text running up and down it. 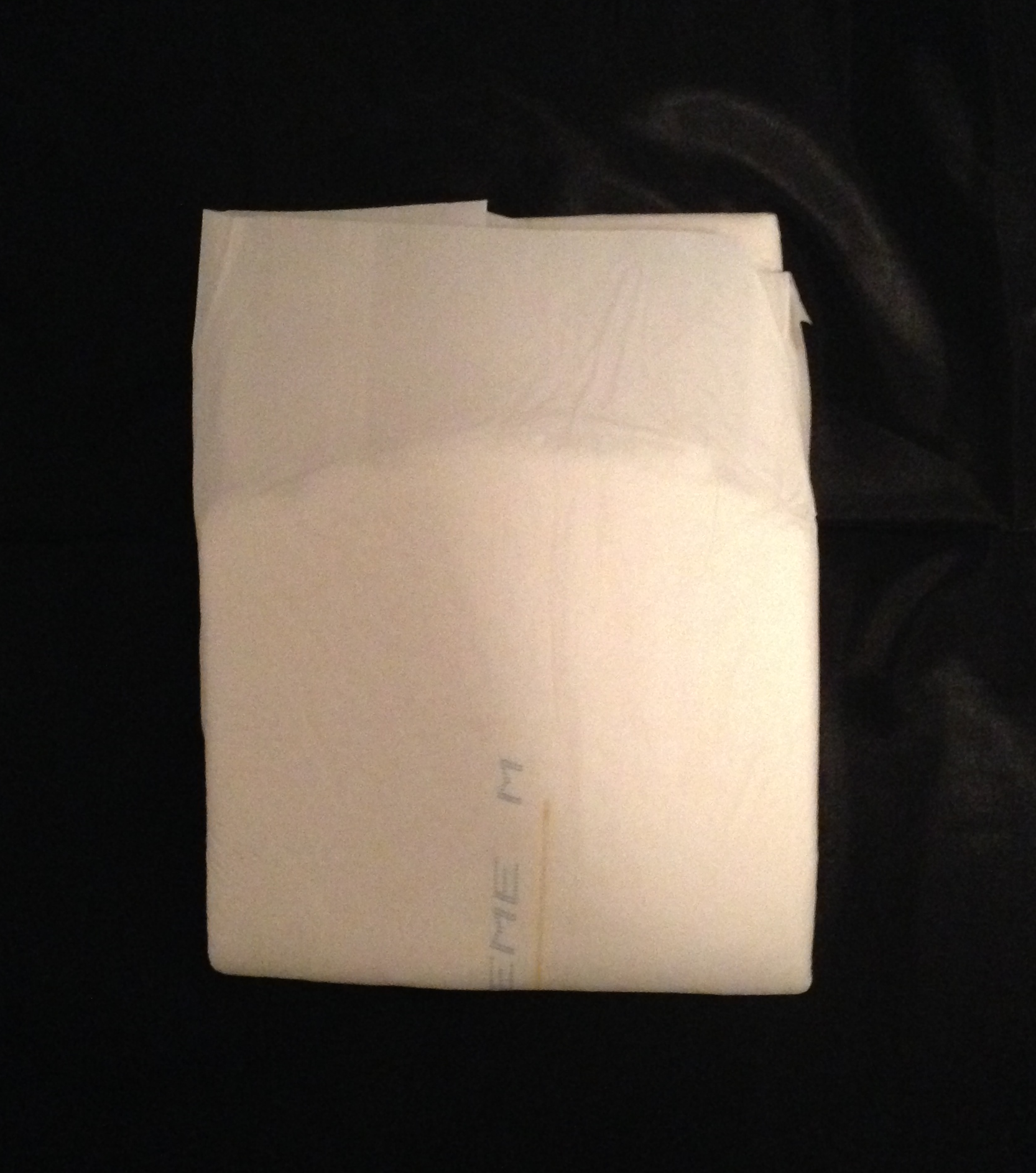 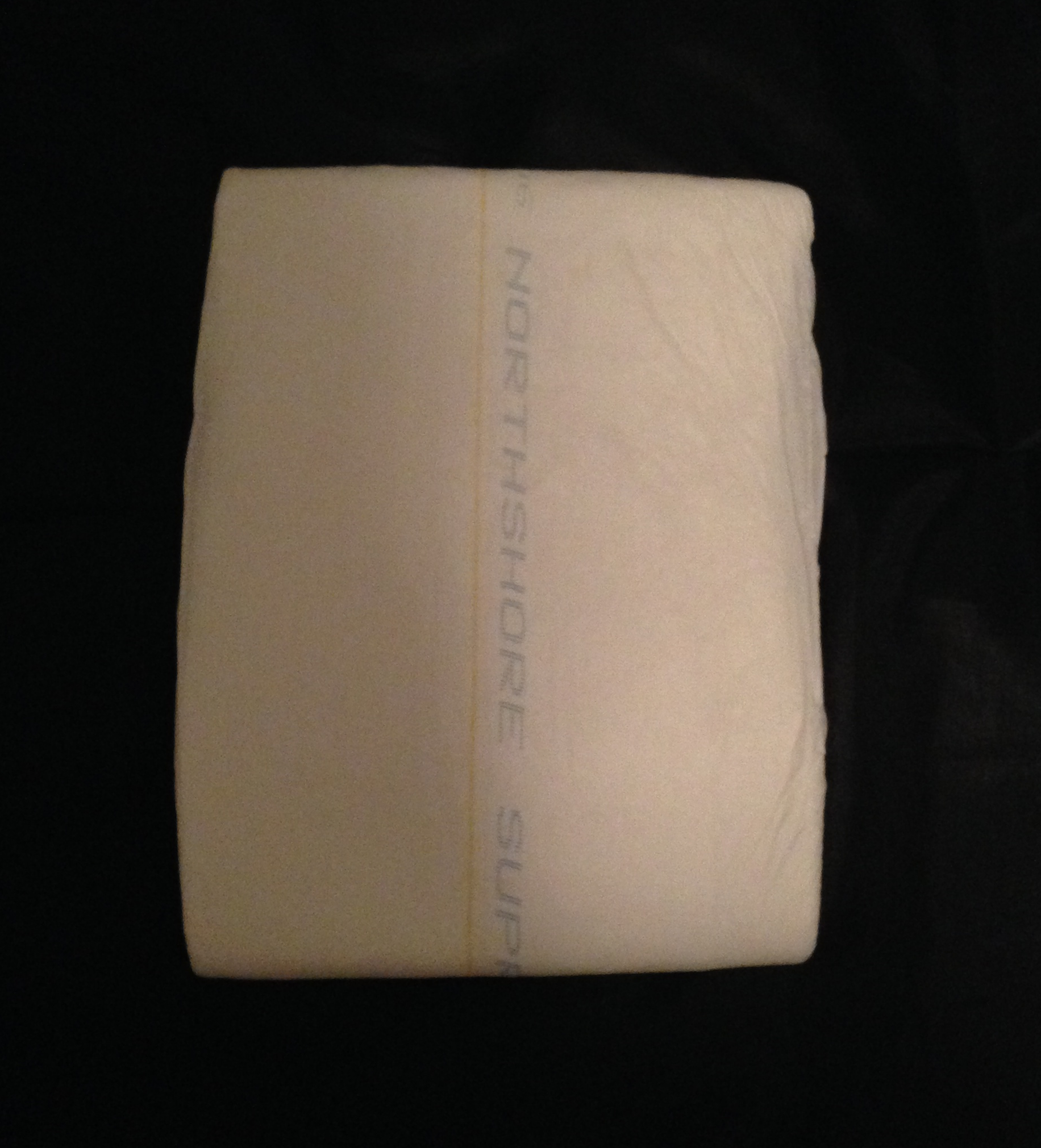 
Three of the diapers were stacked, pressed down with a heavy object (a PS3), and measured to give an average height. The stack was measured at approximately 7.6cm, giving an average thickness of about 2.5cm. 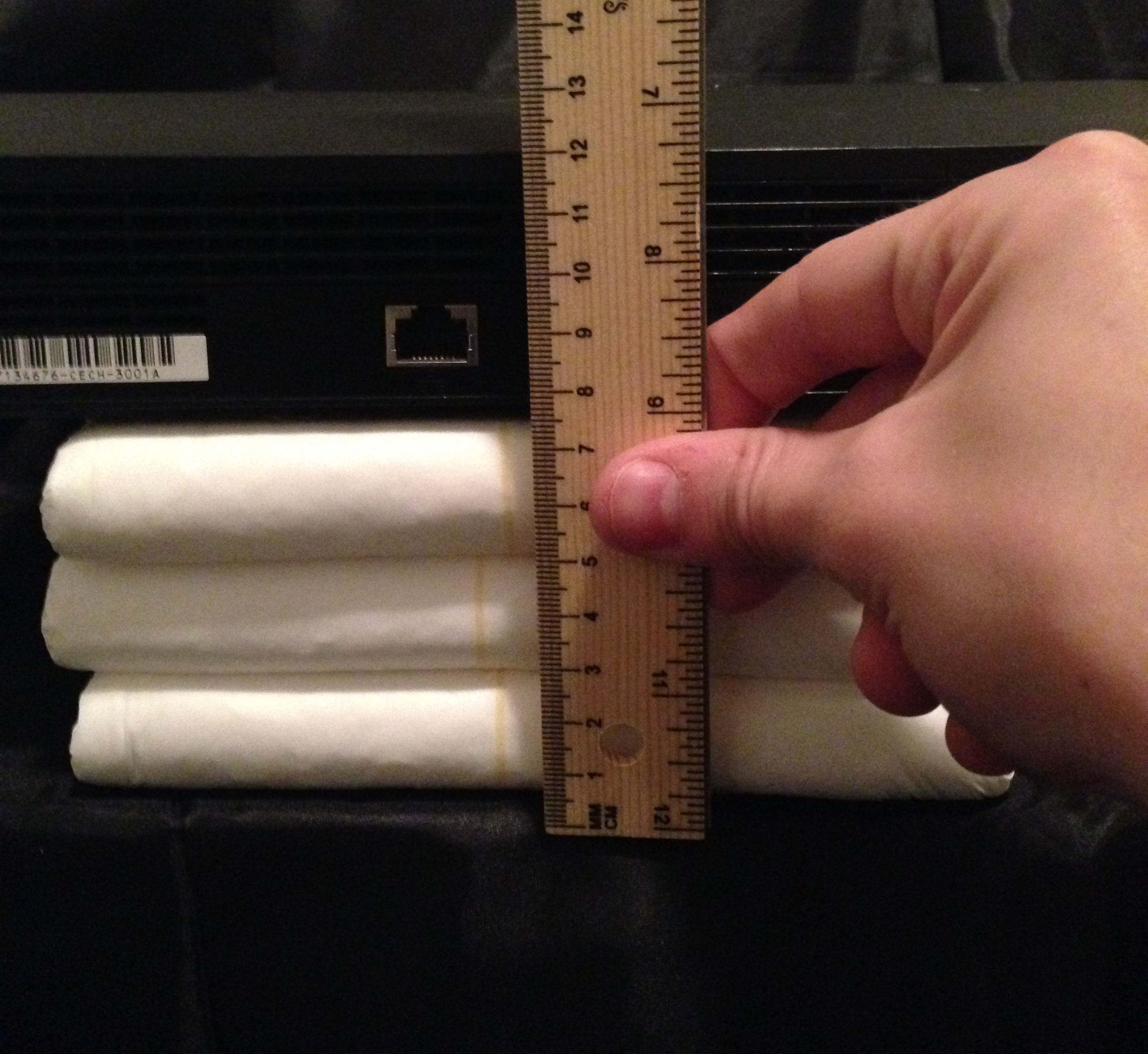 
The NorthShore Supreme has 2 twice-fastenable tapes as do most plastic-backed diapers. The white tapes can be removed from the top of the blue tapes for refastening/adjustment, but this cannot be done again. The tapes stayed strong every time I wore these all the way until I took the diaper off. 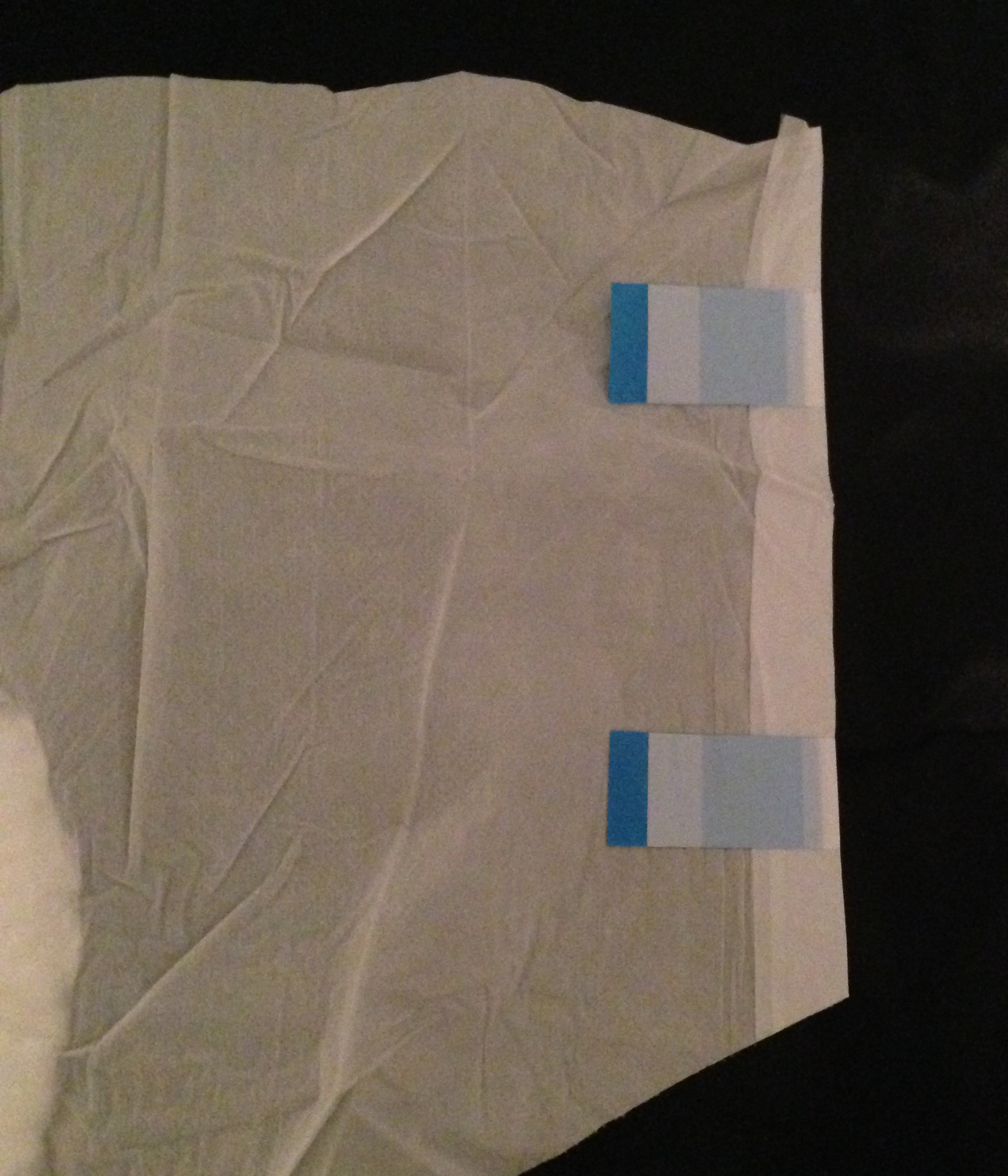 
I laid out the diaper and measured its dimensions. These are organized below for simplicity: 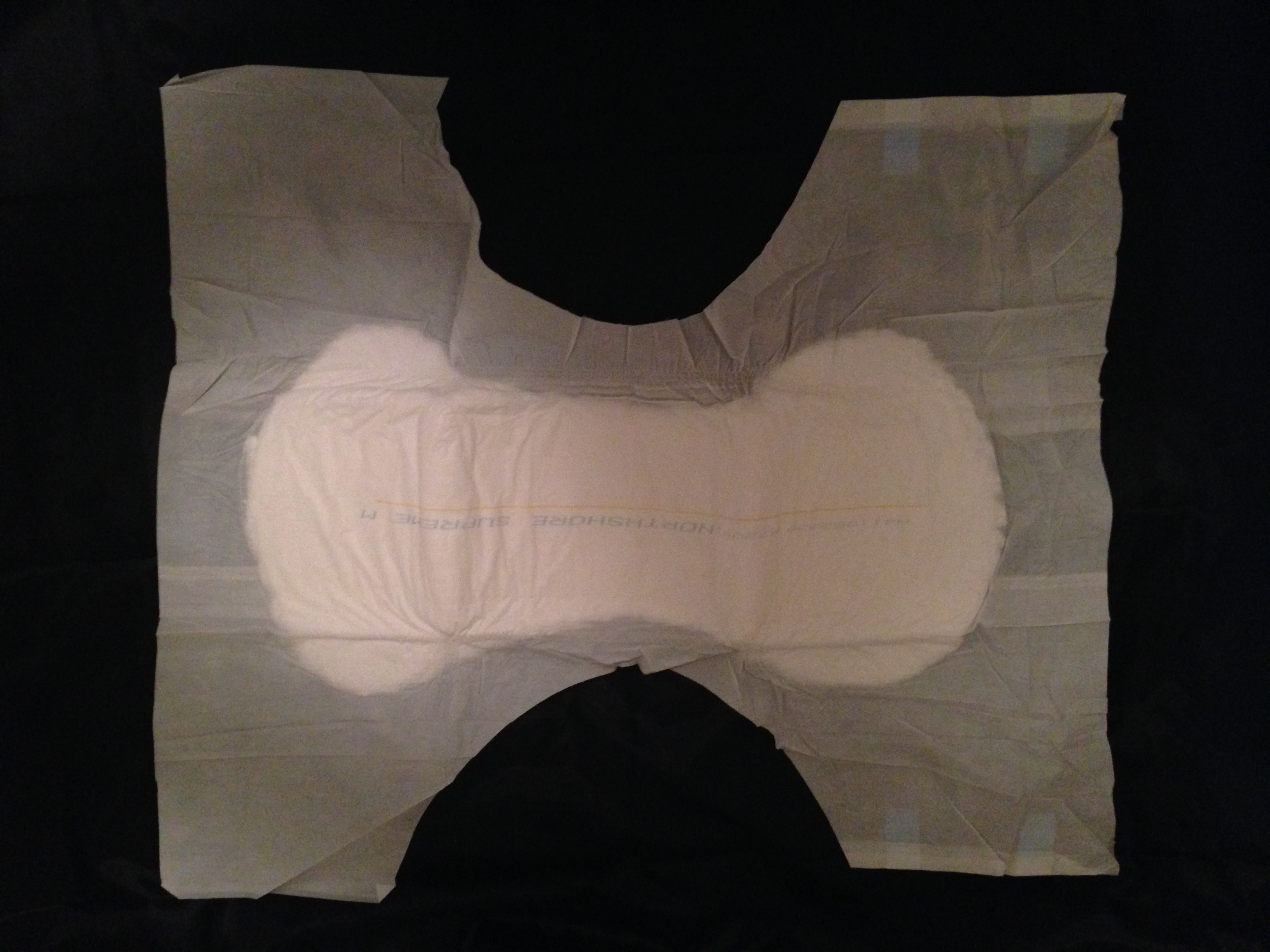 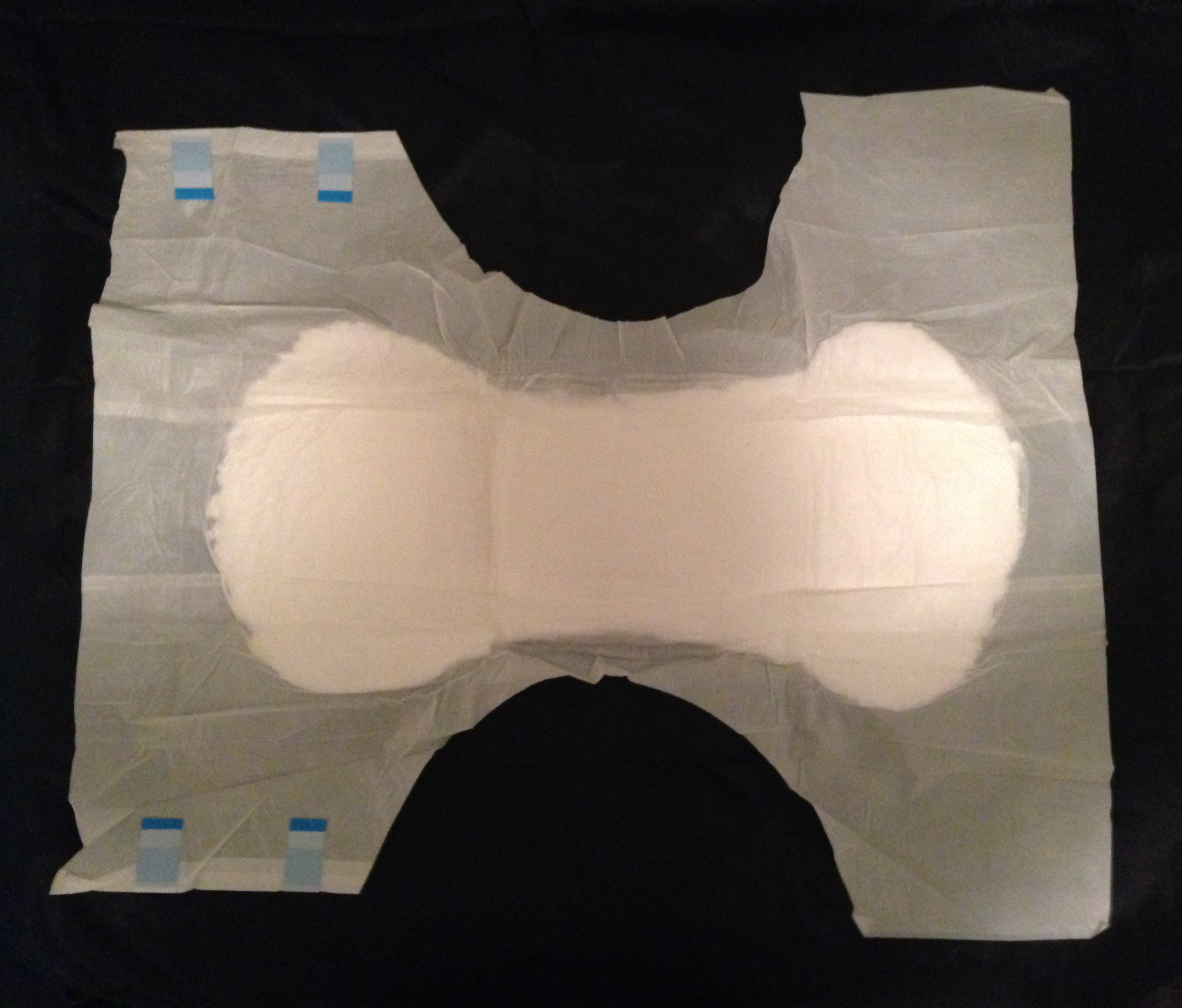 
In order to measure the capacity of the diaper, I wore it and poured water down the front 100 mL at a time followed by 30 seconds of sitting accompanying each pour, recording any observations I made and repeating. I concluded the test when the diaper leaked.

At around 400 mL, the wetness indicator had turned blue along the front. At about 1000 mL, I noticed that the wetness had spread to the point that I was sitting on some wet padding, meaning that the diaper was wicking fairly well. After pouring 1800 mL in and sitting down, the diaper leaked from one side.

At capacity, the diaper was difficult to move around in, although it was very noticeable when dry as well. The NorthShore Supreme was not very squishy compared to most at-capacity diapers.

I find it reasonable to believe that the capacity of the NorthShore Supremes is much higher than its advertised capacity, as it took almost double the advertised amount of water before leaking.

When refolded and measured, the diaper had swollen to 8.4 cm, a bit more than 3.3 times the dry thickness. This is a bit above average, surprising considering the NorthShore AirSupreme's lack of swelling.

The Supreme wicked moisture very well, becoming obviously wet throughout the entirety of its absorbent section before leaking.


My waist size is around 28 inches, at the absolute bottom end of the Supreme's advertised size range. It fit obviously large, going up to my belly button and forcing my legs apart much more than your average diaper. It was slightly softer than the NorthShore AirSupremes - but still comparable - and I noticed no issues with chafing.

To test the diaper out in a real life scenario, I wore it for a day starting at 10 AM and ending at 8 PM. As I always do and advise others to do, I wet the diaper often and in small quantities. The diaper was near capacity when I removed it, and I probably would have experienced leaks if I had kept it on too much longer.

The diaper was not at all discreet, being thick enough to keep me from walking normally and also fairly crinkly. It was very stiff, although it got much less so as I wore it for a longer time period. There was no noticeable smell or clumping. I was not able to adjust the tapes as they were limited-use, although I did not need to.

These diapers are distinctly not discreet, but their performance is nearly unmatched outside of ultra-premium diapers such as Bambino Bellissimos. These diapers are probably best suited as cheaper luxury diapers similar to the Abena M4s. These are good AB diapers, being luxury diapers, but suffer in that category due to the lack of designs or personality. These also suffer due to the lack of smaller sizes, though the average person here probably won't be troubled. I'd say get these if you want high performance and plastic backing that's slightly cheaper than the M4s.
Last edited by a moderator: Dec 15, 2014

I just bought a pack of them and hope to see good results, thank you! And I think it will fit me well(I have a 28" waist as well) And the small advertised 22"-30".

Hdis night premium are the same as the northsore breathable nights. Cost less. Just and FYI for those who like the breathable s.

I think these are great. 2 improvements I would suggest. 1 heavier gauge leg elastic. Like alot of diapers, the leg elastics are shot by the time they travel tightly packed. Heavier gauge would help. 2. Anchor the leak guards higher up. These are anchored half way up the front and that does not always catch a "high stream". 2 easy fixes that really should not cost anything to do. A plus would be to make the leak guards a little taller, but that would be a design change that may cost something extra.
J

I was just looking at these online and wondering how good they were! Thank you this was VERY helpful.

Looks too medical or institutional looking.

Anyone have a method to improve/substitute for the tapes? I also find them to be quite weak.
B

PuppyLover said:
Anyone have a method to improve/substitute for the tapes? I also find them to be quite weak.
Click to expand...

You really can't improve/substitute the tapes on a diaper. You can, however, reinforce them by using duct or packing tape. Duct tape will almost always work. On the other hand, packing tapes sometimes will work and sometimes not, it depends on the brand and type of packing tape you get. Duct and packing tape are available in many stores and online.
A

The only issue I've ever had with these was the tapes. The plastic where a landing strip should be is so thin that the tapes will rip the plastic. Not so much an issue maybe if you tape a little lose and where something to help hold it in place. If you need it tight fitting because you are going no pants then you could have a problem.

Anuric said:
The only issue I've ever had with these was the tapes. The plastic where a landing strip should be is so thin that the tapes will rip the plastic...If you need it tight fitting because you are going no pants then you could have a problem.
Click to expand...

Wow! That's really a shame. I don't doubt that you have problems with the NorthShore Supremes. However I have worn about 800 of these diapers and have had exactly one failed tape (it pulled off the wing when attempting to apply it), and have never had the plastic tear. I tape my diapers tight, too.

For me personally the NorthShore Supreme tapes are among the best I have ever used. Actually, the best. That is one reason I'm a loyal customer. I'm happy that I have great luck with them [emoji854]
J

I have only had good experiences with these too.
A

Mine was only a sample when I bought some air supreme. So maybe I just got unlucky. It never made mw want to buy any. I love how much they hold though. I don't know that I've ever pushed one to the leaking point yet. Although I've had Northshore diapers pretty squishy at 6 plus hours.

these are what im currently using day and night.l i use boosters day and night as well from northshore. these are actually very good diapers, its the ONLY adult diaper ive ever worn that ive never had a tape issue with 4 cases so far. which is a miracle! the only thing i wish they had was an elestic waistband front and rear, and a heavier gauge backsheet. other then that please dont change them! i know some stay they are stiff? i happen to like that! i like the fact that they dont collapse into a plastic saggy bag feeling.
F

Given that this review is for a small size, I wonder how a large size would perform. I recently got a free sample of the BetterDry from Northshore. It was a really good diaper, but I was bothered a little by the lack of plastic in the front. The representative at Northshore offered to send me some Supremes to try, saying they were more absorbent and had the plastic front.

This review is several years old now. Anybody have more recent experience with the Supreme and how it compares with the BetterDry?

FrancisAshley said:
Given that this review is for a small size, I wonder how a large size would perform. I recently got a free sample of the BetterDry from Northshore. It was a really good diaper, but I was bothered a little by the lack of plastic in the front. The representative at Northshore offered to send me some Supremes to try, saying they were more absorbent and had the plastic front.

This review is several years old now. Anybody have more recent experience with the Supreme and how it compares with the BetterDry?
Click to expand...

I would say pretty confidently that the BetterDry perform much better than the Supremes. The only thing that the Supremes are better at is wicking from front to back.

Sent from my SM-N960U using Tapatalk

Yooo said:
I would say pretty confidently that the BetterDry perform much better than the Supremes. The only thing that the Supremes are better at is wicking from front to back.

Sent from my SM-N960U using Tapatalk
Click to expand...

Seconded, I found that a NS supreme will last about up to 12 hours for me, where as a Betterdry will last 16 hours. Either one before leaking, but not necessarily to 100% capacity.

I think all the ABDL diapers come out technically ahead of old Attends. They were wonderful at the time but (and I have one I could go back and compare with) the only real standout was the feel of the plastic. They didn't even have leak guards. I loved them because they successfully met my requirements for what felt like a diaper and I could just go to the store and buy a bag when I wanted them for a reasonable price. We lost that impulse buy satisfaction along the way but we got much better diapers.

The feel of plastic is quite important to me in the overall evaluation of a diaper, so the fact that old Attends (even new Attends for that matter) feel so much nicer on the outside than most other diapers currently available is a thing we need to work on. All this said, Supremes feel pretty good. I tend toward the Supreme Lites, myself but the plastic is the same and it's nice.
You must log in or register to reply here.
Share:
Twitter Reddit Pinterest Tumblr WhatsApp Email Link
Top