The Molicare Super Plus is light purple in colour with thin purple lines running the length of the diaper as decoration. Printed down the middle of the absorbent material in blue are the name of the diaper and a series of squares and lines that act as a wetness indicator. The blue text and pattern is soluble in water so that it will disperse and no longer be clearly visible once wet. With the exception of the indicator, the front and back of the diaper are identical. 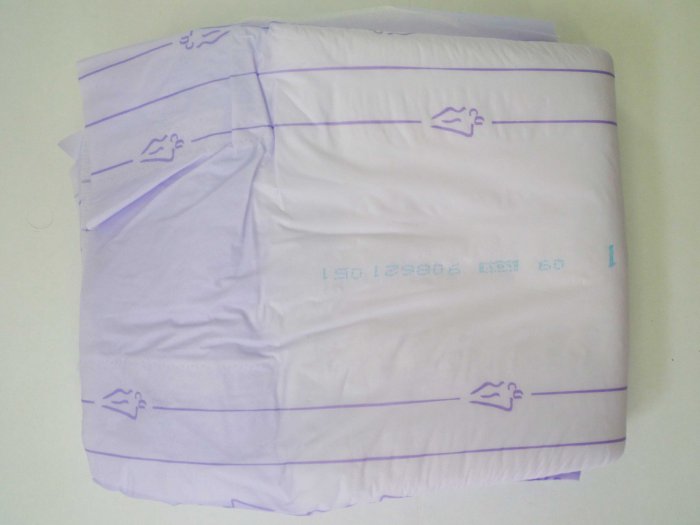 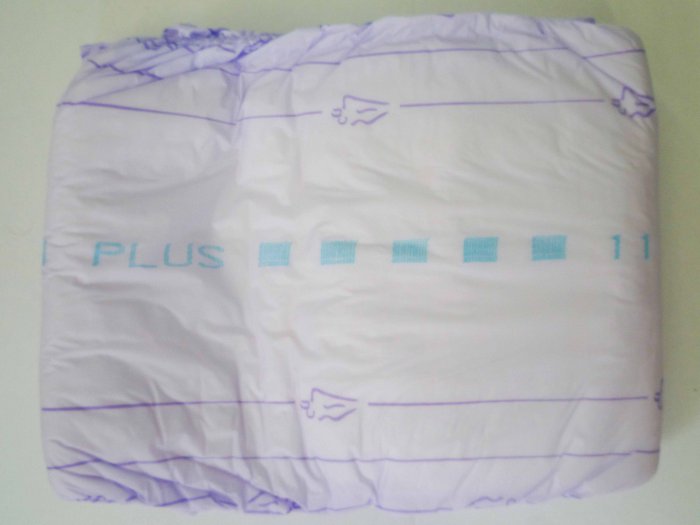 Front and Back of the Unfolded Diaper

Three of the diapers were stacked on top of each other and weighed them down with a heavy book to measure their thickness. The height of the stack was approximately 9 cm (3.5 in) so the thickness of an individual diaper is approximately 3 cm (1.2 in.) 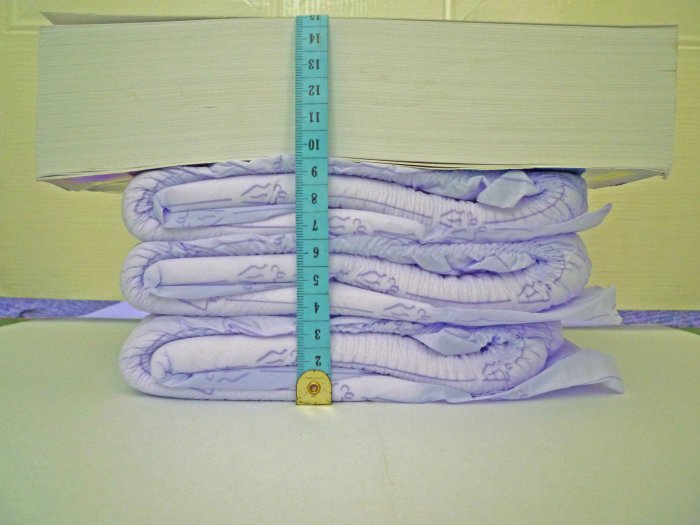 The diaper features a useful double tape system with a secondary white tape on top of the primary blue tape. Both tapes will stick anywhere to the plastic on the outer of the diaper. If the blue tape is misplaced, the white tape can be peeled off and re-applied to achieve the correct fit. Alternatively, the white tapes can be used to reattach the diaper if it needs to be briefly removed, or they can be used to seal up the diaper once used. 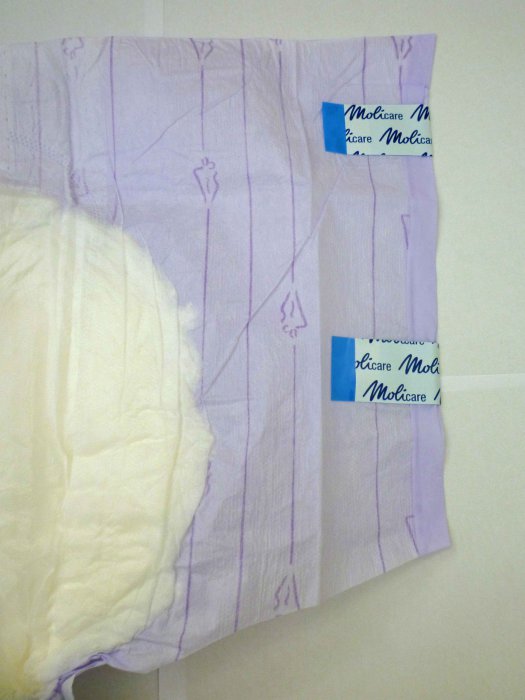 The outside of the diaper is thin, soft plastic that is very quiet; it makes little noise when being unfolded. The padding is also soft and quite smooth to the touch. It is distributed roughly in an hourglass shape but with more padding at the rear than at the front. The diaper has standing leak guards, but neither the front nor back waistbands are elasticated. 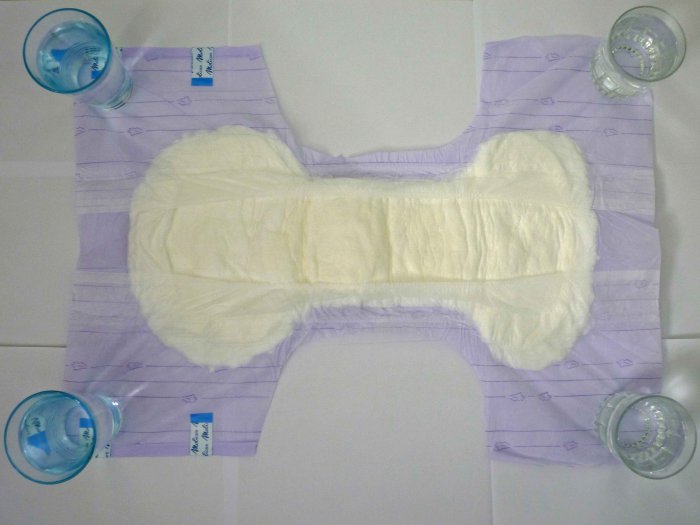 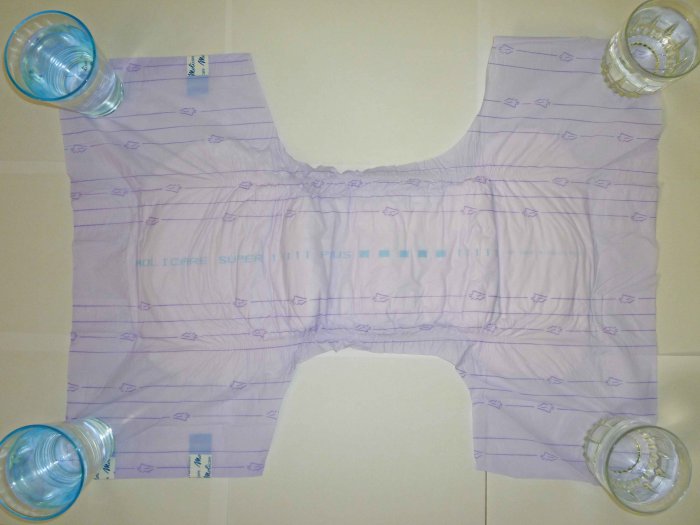 The Inside and Outside of the Unfolded Diaper 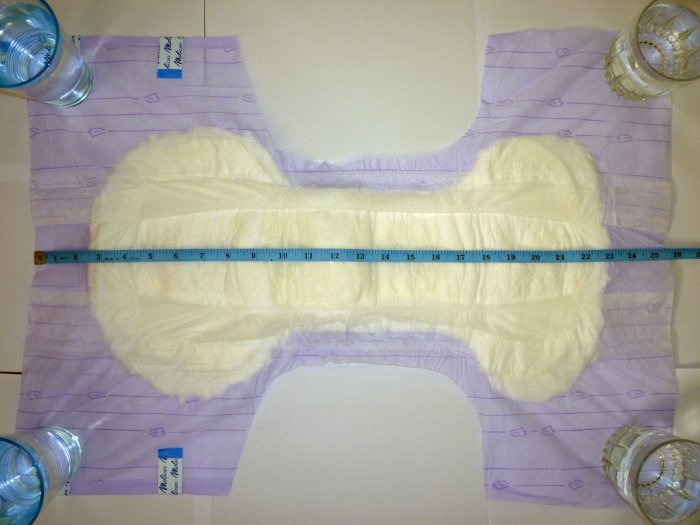 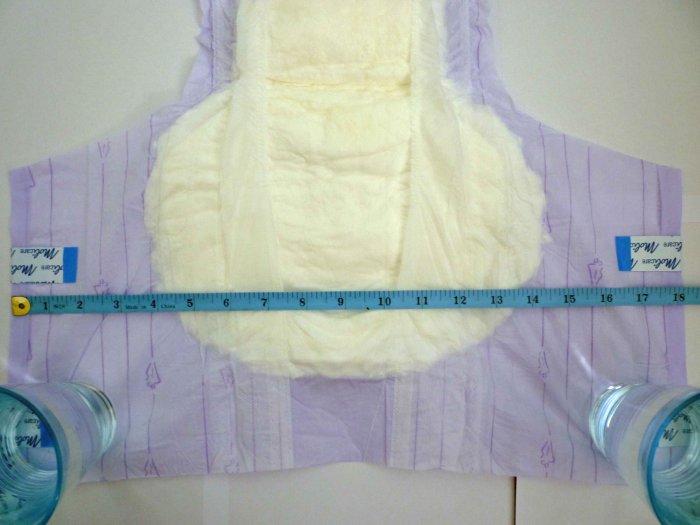 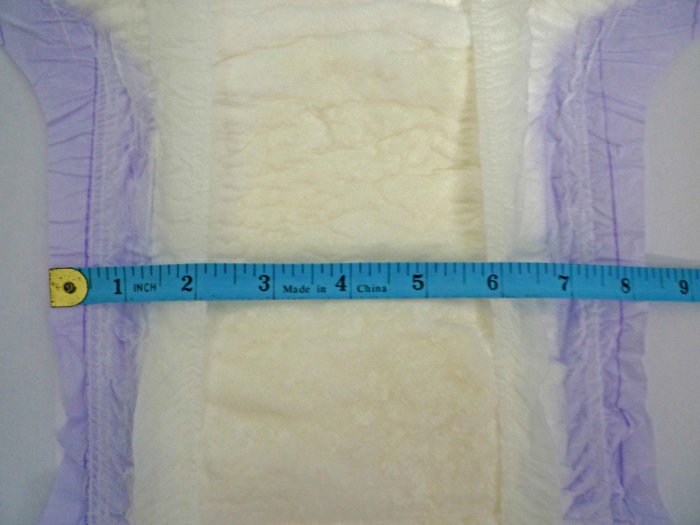 Measurements of the Diaper


To quantitatively measure the capacity of the diaper, a test was used to simulate a gentle wetting. A diaper was put on and 100 mL of warm water was poured down the front of the diaper. The wearer then sat down on a chair for 30 seconds both to allow the water to be absorbed and the see if it leaked. The cycle of adding 100 mL of water and sitting for 30 seconds was repeated until the diaper leaked.

At 500 mL the inside of the diaper felt wet at the leg cuffs, but the outside was still dry to touch and twhere was no leakage. At 900 mL the water was no longer absorbed immediately and wetness could be felt against the skin for a few seconds before the water was absorbed. After sitting following 1000 mL there was a very small wet patch on the chair from one of the leg cuffs (approx. 1 cm in diameter.) After sitting following 1100 mL the diaper leaked significantly from both sides so the test was ended.

Given the parameters of the test, it is reasonable to conclude that the diaper is likely to leak when holding over 900 mL. This is in agreement with the capacity in the manufacturer's specifications of 847 mL.

The wet diaper was folded in the same way as when unused and the thickness re-measured. It had swollen to 6.5 cm (2.6 in,) ~ 220% the original thickness.

The Wet Diaper Compared to a Dry Diaper

For a more qualitative test of the diaper's performance, one was put on in the morning and worn while doing normal day-to-day activities. When uncovered the diaper makes an audible crinkle as the wearer moves about, but is very quiet relative to other plastic-backed diapers and almost inaudible underneath clothing. It was worn for approximately 6 hours and during that time was given one large and one small wetting. The diaper was comfortable the whole time with no rubbing at the leg cuffs, and despite over an hour of walking during the morning the padding did not clump significantly between the legs. Once it had been wet there was no noticeable odour.

The tapes stick very well despite being taped tightly to ensure a good fit. I have tried to remove the bottom blue tapes once stuck before and they are more likely to tear the plastic than come unstuck. They hold the diaper securely in place. It did not slip down at all during the time it was worn during the day or even after the end of the capacity test.

I have a 32 in waist which is the upper limit of the specified range. The diaper still fits well but I would agree with the manufacturer in that it is unlikely to fit a larger waist than mine. The rise is comparatively low which helps in keeping the diaper discreet while still high enough to stop leaks from the top of the padding.

The only issue I have encountered is during night time use. As I sleep on my side, the padding between the legs is usually quite bunched up by morning. I would not be as confident in it holding a large wetting at that point as I would be during the day. However this is an issue common to many diapers if sleeping on one's side and is not restricted to this particular product.


I purchased these from Oxton Partnership Ltd (via eBay) at 13.75 GBP for a pack of 14 including UK delivery. This works out at a cost of 0.98 GBP per diaper (1.52 USD on date of purchase) which is above average for the capacity, but I have previously bought them at prices 10-20% cheaper from elsewhere.

Even when cheaper elsewhere, you still pay a premium for having the plastic backing. Molicare's "Soft" range features cloth-backed diapers at the same or even higher absorbencies but at a significantly cheaper price. This is particularly pronounced in the small size where the Super Plus is the least absorbent tape-on product.

Overall the Molicare Super Plus is a decent product. The fit is very good and the double tapes are useful for a number of purposes. They are comfortable to wear and do not sag even when at the stated capacity; they are also fairly quiet and discreet. If a plastic-backing appeals then I'd recommend this product, but otherwise if your main focus is capacity there are better options for the price.

I love this diaper. It never leaks and holds diarrhea very well.

Absolutely my favorite for nite time. If you need an example of what is meant by "wicking" you need to try this just once.
B

I recently went through a whole case of Molicares. I like them too. Now I'm trying Abena M4's. So far, I prefer a higher front-I like the top of it to hook over my hip bones(I recently lost a bunch of weight)

These are a pretty discreet plastic-backed diaper. I am on the upper range of the smalls, but I like using the smalls for the lower-rise. They've since made some small tweaks. They now come in blue and changed the tapes a bit…

I don't know why, butt I dislike it when diapers look like state hospital supplies. Kinda like how iron lungs had that drab green or peach color.

Continued from last post. (couldn't edit)
But I don't care for super cute diapers either. Just some cuteness, to make diapers not depressing looking. (I hope that makes sense.)

I think now that these are blue with stripes, they really look nice. I had gotten used to the purple, but I really like the new blue. I think Huggies had a look very similar in the 80's with stripes.
J

I also love to wear Molicare super plus diapers and they are also very comfortable and very absorbent. I wear size medium.
B