So I've always liked tena both because they have a good product and also because they're one of the few that still make plastic backed smalls.

I kept hearing good stuff about the stretch super (mainly that it's one of the few cloth backed diapers that doesn't suck), and wanted to try it out. They don't have it in small, so I ordered a sample pack of mediums. I expected them to be too large, but the fit actually ended up being worse than expected. The padding itself is fine in terms of rise, but the stretchy sides have enough length to wrap nearly 180 degrees around to the other side. XP medical sent me 3, I used up the first one messing with different schemes (wrapping the side on top of each other) but found they allowed the rest of the diaper to slip due to not velcroing to the front.

The next one I tried pleating the sides and duct taping them to make it shorter but still allow the velcro to do its work. That worked out well for about 10 minutes until the tape slipped and let the pleats out.

After a bit of thinking for what to do with the last one, I decided that since they're cloth backed, why not sew the pleat in? Here are the results of 10 minutes with a needle and thread: 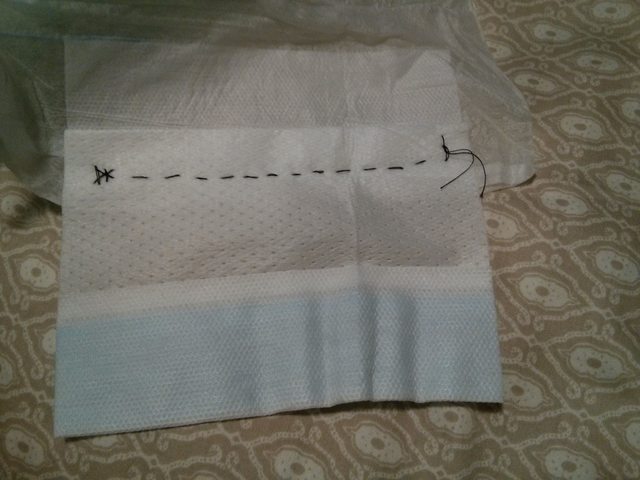 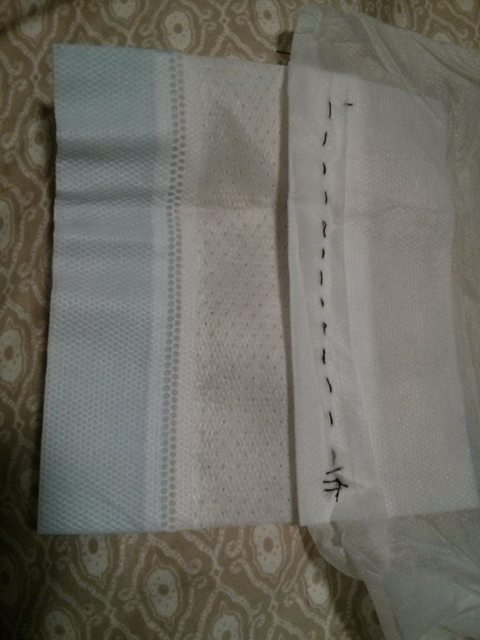 That took about an inch and a half off each side, and so far they seem to fit as intended and the stitching has held. If they continue to hold up for the next few hours I might consider buying a pack and breaking out the sewing machine.

I keep meaning to try these.

As for shortening the tapes, why not just staple them? If you're worried about the points getting you, staple from the inside out. Or grab a few cute diaper pins and use those. Sewing certainly works fine, but it seems like a bit of a bother for something you're going to pee on and throw away.

Cottontail said:
As for shortening the tapes, why not just staple them? If you're worried about the points getting you, staple from the inside out. Or grab a few cute diaper pins and use those.
Click to expand...

I didn't think of that actually, could be a decent idea. The only potential problem I'd see with both of those methods is that since there would be less points where the side material is pierced, that might put too much stress on those locations and it could rip through. The coarse sewing job I did is already pushing it in areas where I placed the stitching too widely.


Cottontail said:
Sewing certainly works fine, but it seems like a bit of a bother for something you're going to pee on and throw away.
Click to expand...

Yeah, that's why I've never been a huge fan of diaper modding. The thing with this though is that if I break out the sewing machine I could probably do an entire pack in less than 5 minutes. The crease that I sewed along is already there from the way the diaper was folded, and because it's an odd number of folds it doesn't even matter where along it I actually stitch. Consistency would be a piece of cake. Literally just a matter of unfold-->run left side through machine and cut thread->run right side through machine and cut thread->refold.