I keep laughing everytime I try and think of ways around this. So I bought my first case of nappies without realising just how much space they actually take up. I live in a flat with 4 other guys, and although I have my own room any of them can come in (theres no locks on the doors). Now I'm all out of ideas of what I can do with these. I managed to fit like two packs into a spare drawer, but i still have 6 packs left.

What do you guys do to store your diapers?

I put them in old computers or draws.

You could use a couple plastic storage bin or a storage unit from ikea with doors on it.

At the moment, mine are stored in a locked bicycle travel case. Plenty o' room if you've ever seen one.

You can unpack them and try to store some individually

rent a small self storage space near you. keep all your "items" there, so there's no chance you get caught by a snooping room mate.You can go get what you want whenever you feel the urge.
C

Keep your overflow in a cardboard moving box in the closet, marked inconspicuously. Everyone has that one or two boxes they never get around to unpacking when they move. Think about your other hobbies or interests if you're drawing a blank. "Paint supplies and drop cloths", "Misc T-Shirts", "Manuals and Backups", etc. Putting a layer of said items on top inside/outside the box to allay any snoops might help.

Close the top of the box with a strip of packing tape, then cut it open. Now apply a 2nd piece of tape over the 1st, so you can reopen and close the box without damaging the cardboard.

I use duffel bags

Oh, déjà vu! I remember ordering my first few cases years ago, when my parents were away! I ended up wrapping them in black bin bags and hiding them at the back of my wardrobe. In the dim light you could hardly see the them.

This calls for some good old Space Bags!

If you live with hoarding tendencies, you've already got boxes everywhere so an extra few are nothing. I do and it's kind of odd hearing how adding an extra box of stuff would raise any notice. 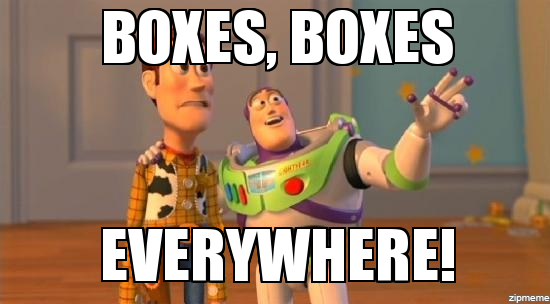 I put them under my bed, in other boxes, in the back of my closet, and in random back packs/laptop cases.

I am fortunate I live alone, and have an entire closet devoted to my incontinence supplies, diapers, catheter bags, etc. Only I see it, except for one other person who knows I have issues, but they were polite enough to never broach the subject.
B

Wow thanks for all the replies!
I ended up packing as many as I could into a spare drawer, then used the infamous "spare box in the wardrobe" technique for the other 5 packs
M

Fraldinhas said:
You can unpack them and try to store some individually
Click to expand...

At the risk of forgetting where one or two are hidden and have that surprise explode in your face sometime in the future.

This used to be fun for me, finding hiding spaces for diapers. Im with Maxx though, i used to split them up and stash in every possible place. But unless you have a treasure map. You may forget. I was embarrassed one time by the stray long lost diaper. Now, i dont need to super hide them. I put the packs in dark pillow cases on the very top shelf of my closet. Then I replenish a convenient stash spot in my nightstand. The nightstand holds 6 diapers with boosters and powder etc. enough for a few days. most people respect your nightstand as private (i hope). Im not hiding from anyone who lives with me though, just from guests. With roommates, i had a locking foot locker in my room. I used it for 'important papers".

I use luggage locks with duffel bags with zippers and leave em somewhat buried in my closet and/or under my bed. For the most part this works, people have lots of storage and random boxes, bags, and other items in these areas, but people can and do go through these areas if they're looking for stuff they can't find if you're sharing your living space with others. I'd suggest using something you can secure/lock, so that way someone would really have to go out of their way and be actively trying to invade your privacy to find them. I'm going to get a chest I can put a padlock on, so instead of having 3-4 duffel bags full of supplies, I can have one chest.

Get a large cardboard box and seal the diapers in the box. Then get a broad tip black magic marker and write, "Not Diapers" so no one will suspect. This was in the news. There actually was a guy who got busted when a cop stopped his car for a traffic violation and saw a jar on his seat marked, "Not Pot". I just had to go there.

When my kids went to college, I built them a large wooden foot locker, Cargo Furniture style, and I bought from the hardware store, a latch that would take a pad lock, so they could lock up whatever they wanted. I wanted to give them a place where they could protect their privacy and if not that, valuables.