Gave up on Microsoft(xbox), now what?

:wallbash:So today the fourth mic I've had in the past three months broke wile I was talking to some friends. I never did anything to it, it just stopped working. After resetting my xbox, taking the mic out and putting it back in, and unplugging my controller it still wont work. Having no job, I can't afford to pay $80 every three months on top of games and a gold membership, so I'm thinking about getting rid of my xbox altogether. I have a total of 28 games, two wireless controllers, one wired controller, and one guitar hero controller. That on top of the xbox it's self should get me a decent amount of cash. My question is what should I get after I sold it all? I was thinking the money would go towards a PS3 or a computer but I don't know which would be the better choice:dunno:. Or if I should just sell the wireless controllers and a few games and buy a really good mic(like Turtle Beach or something). Any input on this would be appreciated:thumbsup:.

I have a Turtle Beach Mic and they are awesome. I have the Ear Force X1 ones. Deffitinaly pick yourself up a pair. I also use mine on my pc.
Z

DJHusky said:
I have a Turtle Beach Mic and they are awesome. I have the Ear Force X1 ones. Deffitinaly pick yourself up a pair. I also use mine on my pc.
Click to expand...

You said you were going to bed

On Topic: Mics are $80 there? My mic is $20 PLUS it came with the "chatpad" keyboard thing. I'm using the regular Xbox 360 mic, and it works fine for me. I don't see why you would need a specialized one.

ditch that x-box like a dirty diaper, nothing good can come from it. *boos x-box* i would say get a PS3, but you should check if it has any games you want play, plus it has blue ray. PC will always be awesome though. but that's just me.

Microsoft mics suck. Like DJHusky get a Turtle Beach Mic, they work great!

I would recommend keeping the 360, take better care of your mics (possibly get a different brand) and only Rent the PS3 to beat the few good and original games it has such as Heavy Rain.

Other then that PC gaming is pretty strong and is far from dying out. But before you ever get in that pool, find out the basics of computer.. such as how and why they work. (no that doesn't mean you have to code, or wear a pocket protector)

I have a PS3 and a gaming PC, and I have to say that the PS3 has some nice exclusive titles, but I don't really use it for online play; not because it's not good online, I just hate playing shooters with console controllers and having to put up with matchmaking. IMHO, PC is still the best online platform. It seems anytime I have occasion to use the 360 online, it ends up being 12 year olds being morons. You might be better off just springing for a decent headset though. As others have pointed out, the Turtle Beach ones are pretty good. (But if you really want a nice headset: Sennheiser USA - Closed Headset, gaming Headset, PC 350, Skype, VoIP - Private Audio you would need an adapter for the 360 and the price is almost the cost of a new 360, but Sennheiser makes good gear )

The wired Xbox 360 headset mics suck horribly. I've got half a dozen of the things, and they're all unreliable at best.

My wireless Xbox 360 headset, on the other hand, is brilliant. It occasionally disconnects from the console and takes a few seconds to reconnect, but I think that's because of the ludicrous amount of 2.4GHz EM pollution in this house (two 802.11g WiFi networks, plus 8+ in range from neighbours; two different cordless phones; three Xbox 360s, thus 10+ wireless controllers that could potentially be in use; etc.). But apart from the occasional disconnecting, it's been very reliable, and much more convenient than the wired ones. You just have to remember to charge it (the battery lasts around eight hours, IIRC).

I don't know what you guys are talking about I have had 2 wired mics in the past 3 years of having my Xbox and they only broke because i threw it...

Yarfiggle said:
I don't know what you guys are talking about I have had 2 wired mics in the past 3 years of having my Xbox and they only broke because i threw it...
Click to expand... 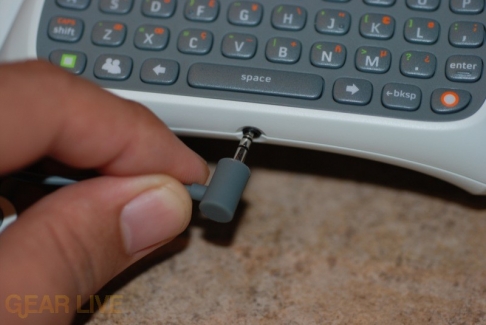 Im just curious which mic are you buying that cost $80? I went through 2 $20 mics then suck screw this and bought a turtle beach x31 which I love. Its annoying because it takes batteries but the sound is amazing and when playing search and destroy, i turn off the chat volume and turn up game volume really loud. I can hear people coming from really far off, and i know exactly where they are coming from. Its fun to hear someone them shoot 1 shotty bullet around a corner and kill the guy. Then listen to the guy bitch at you and freak out.

Technologic said:
Im just curious which mic are you buying that cost $80?
Click to expand...

Not one mic, all four mic's combined cost that much.

Turtle Beach FTW Definitely I've got a pair, and you can literally hear other xbox live players breathing and sneaking up on you. Definitely worth the money, do it!

That's a strange-looking headset you have!

Point Blanch said:
That's a strange-looking headset you have!
Click to expand...

its the original one i think

Yarfiggle said:
its the original one i think
Click to expand...

-_- I gave two options, I even numbered them, and you said yes...
If you could go back and look over the post and then reply with the number that would be nice.

o sorry just kind of looked at 1 so yea number 1.

That's better, my first mic was like that and it lasted almost a year. All the ones after that were like pic 2, I think those ones are of a worse quality.