The DC Idyl is a new male gender-specific diaper from Diaper Connoisseur, released in the holiday season of 2015. It is similar in design to the DC Amor, but promises improved frontal capacity and wider tapes.


The DC Idyl has printed packaging which matches the theme of a male gender-specific diaper, and is analogous to the DC Amor packaging. Gender-specific prints were a largely 1990s phenomenon in the US and the packaging does evoke similarities to 90s diaper packaging. 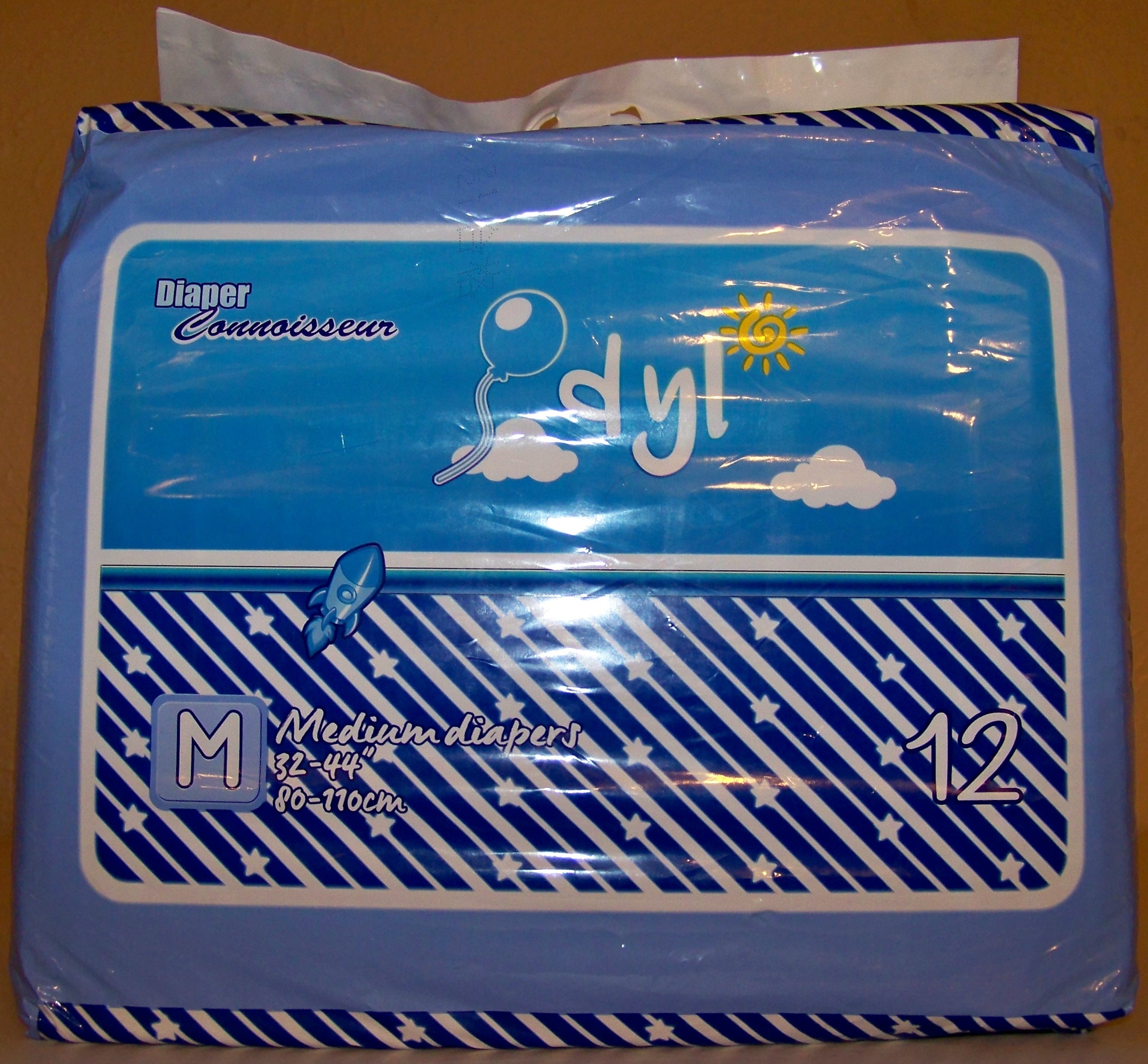 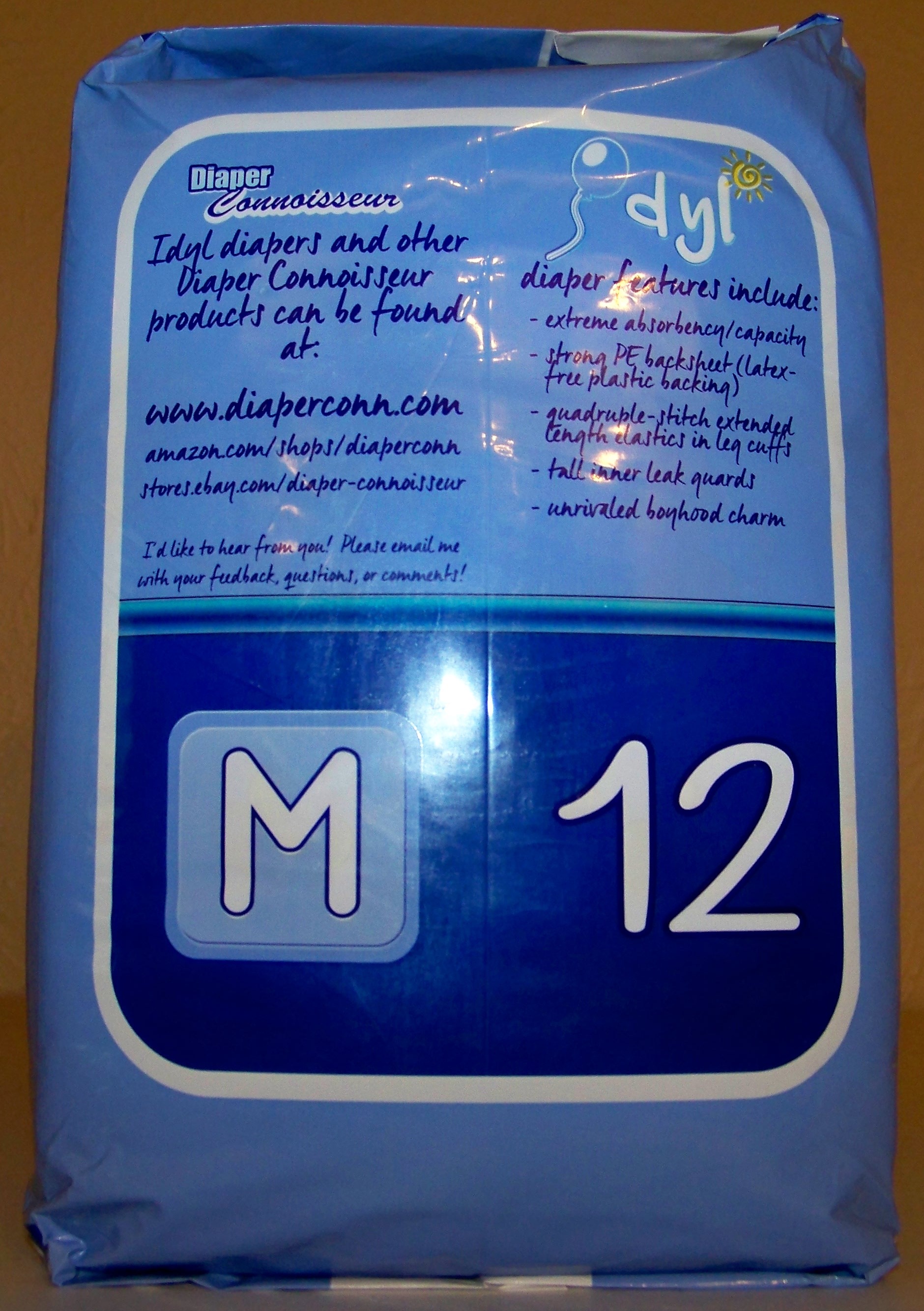 Front and Back of Packaging, Respectively


The Idyl has an all-over blue outer cover with a landing zone print that repeats several images of flying animals on a transparent panel such that the blue cover appears as the sky. It's original and quite believable as a generic gender-specific baby diaper print.

The blue cover on this diaper is a much darker and bolder shade than a typical baby blue. This may be specific to the first run of this diaper, but on the diapers I have in hand for this review, it really seems to stands out-of-place. 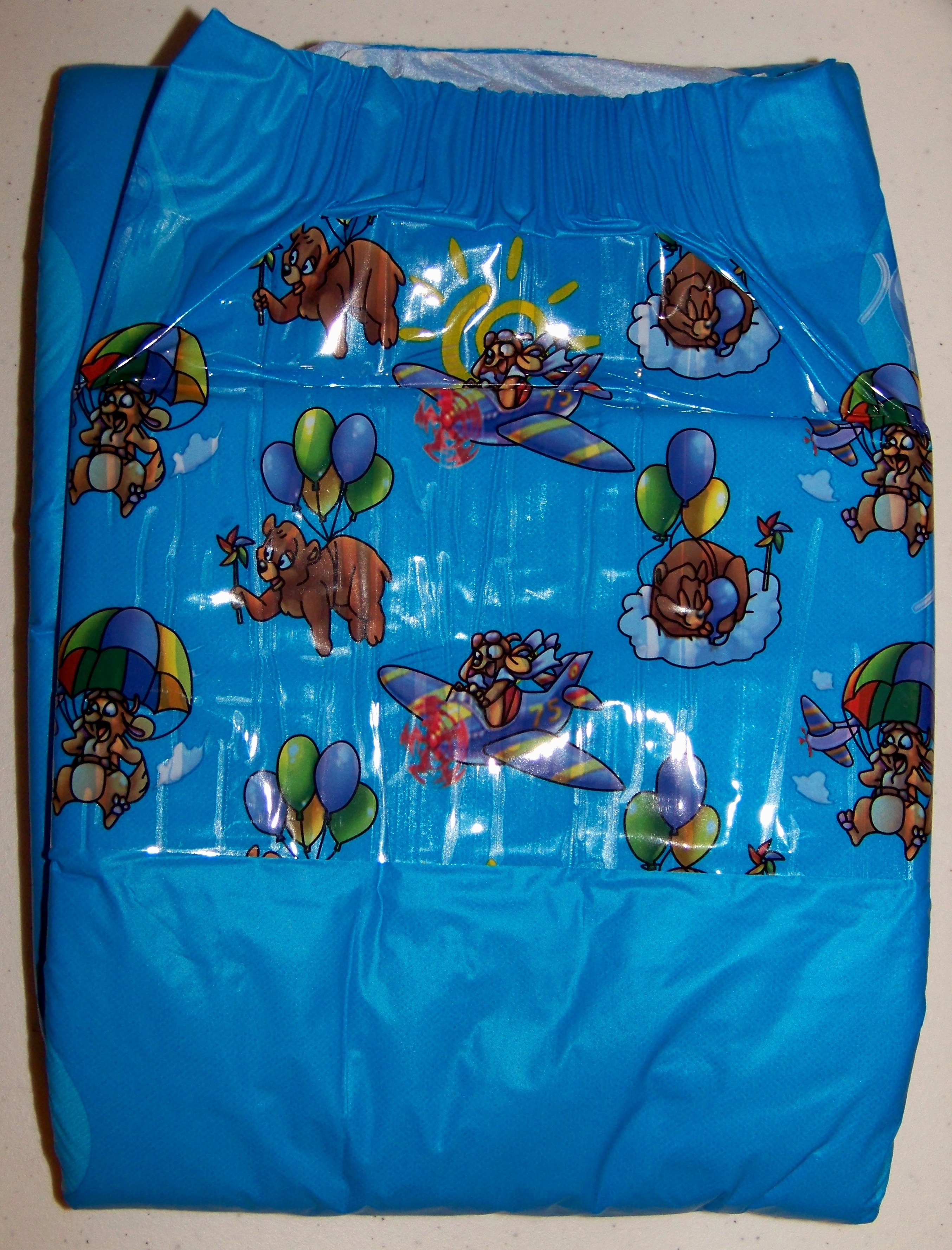 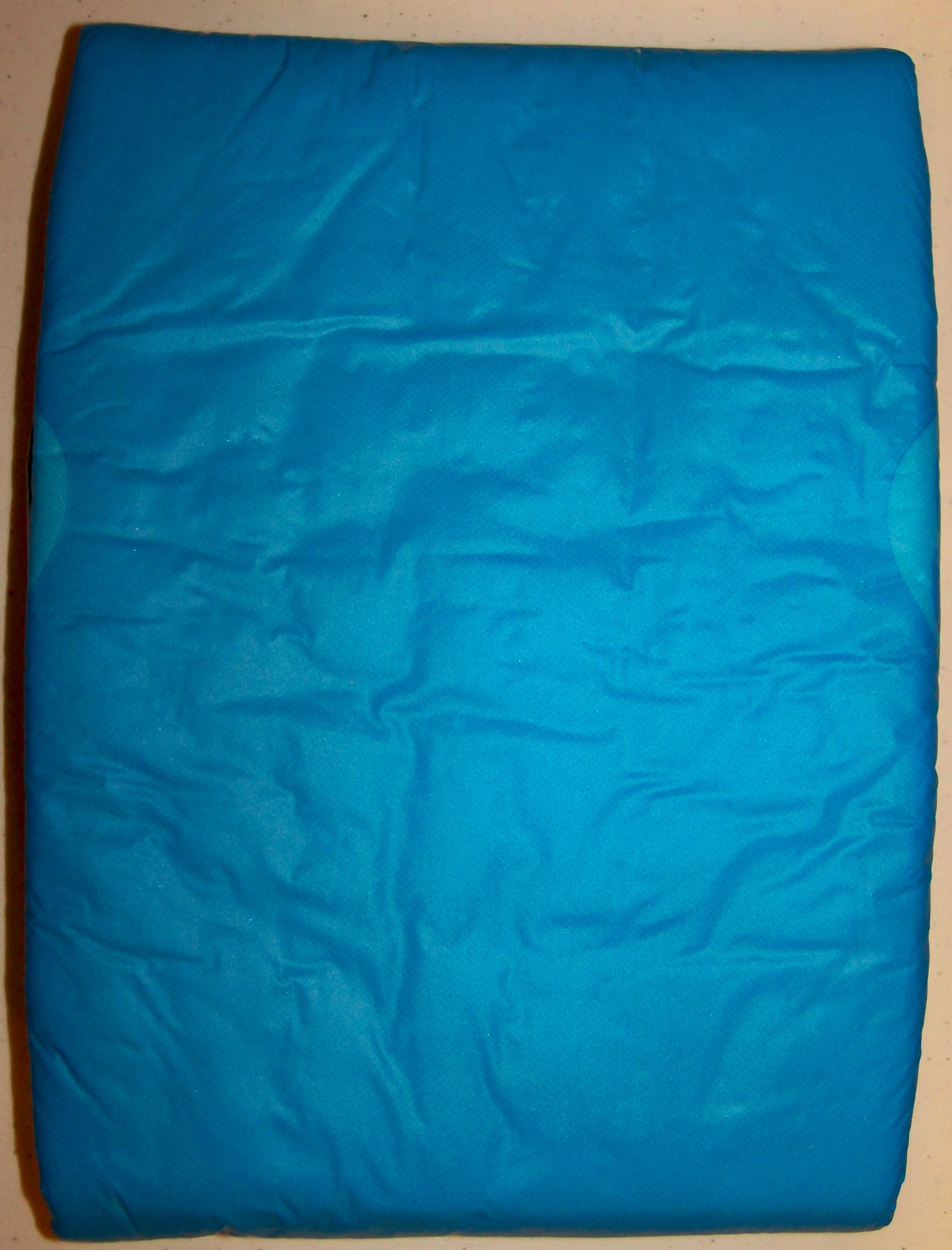 
To test their dry thickness, I stacked three diapers on top of each other, placed a heavy book on top of them, and measured their height. Together, the 3 diapers had a height of approximately 9.9 cm (3.9 in). Thus, the dry thickness of a single folded diaper is 3.3 cm (1.3 in).

The DC Idyl uses the conventional double tape design seen on most adult diapers. The tapes have a blue tip without adhesive to pull on and are noticeably wider (4 cm, 1.5 in) than most diaper tapes. I found them to stick well and stay adhered. 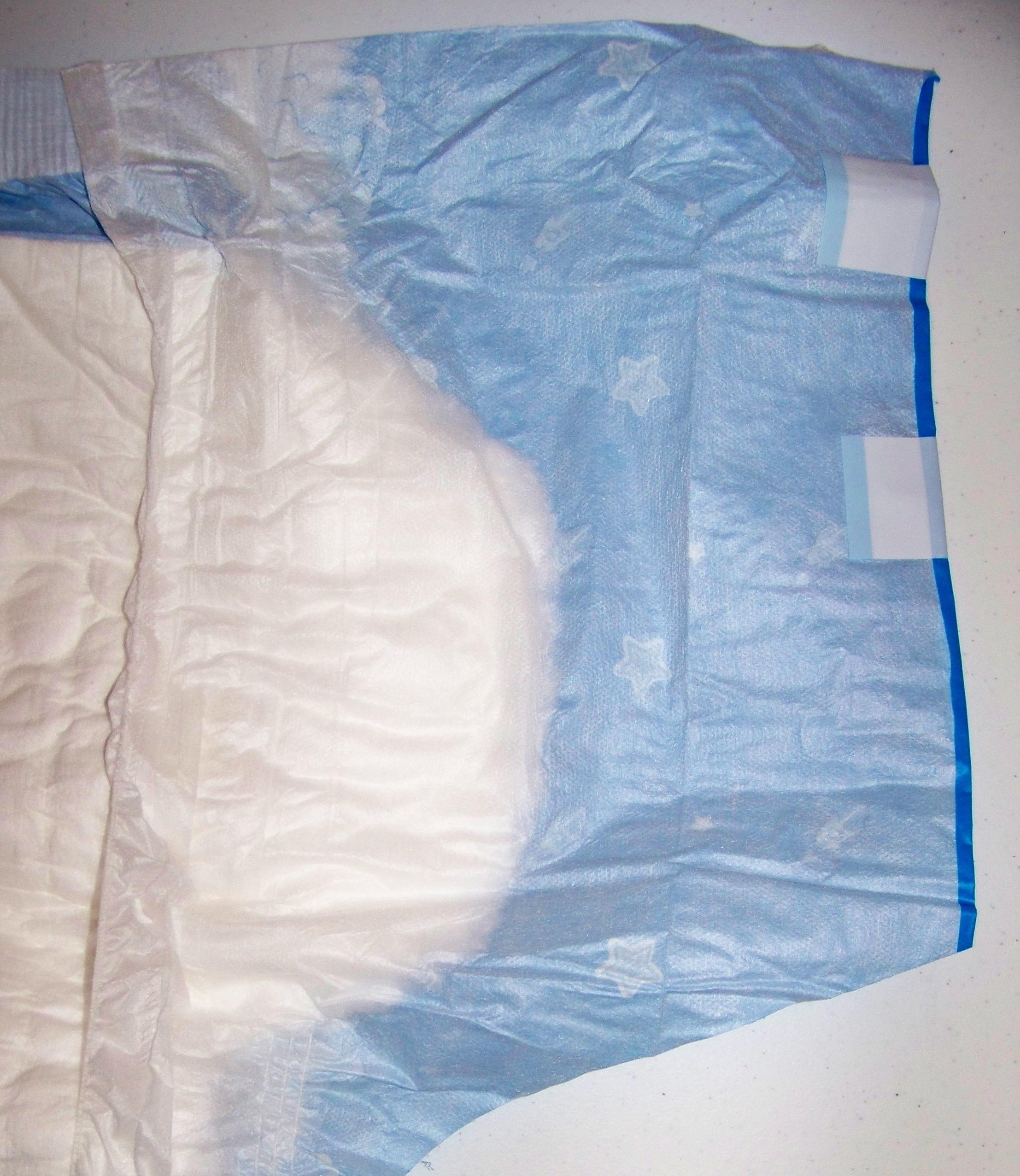 
The inside of the diaper is all white, and the padding is arranged in an hourglass shape. The padding feels packed but slightly fluffy, and has a dry, cottony texture. The diaper has standing leak guards. It has elastic waistbands in both the front and back.

The back wings of the diaper are unusually tall relative to the front wings, and it looks really disproportionate when spread out, both in absolute terms and as compared to other diapers that I have tested.. I found this to be really noticeable while wearing the diaper, where it felt taller and more encompassing than to what I'm accustomed. I found it comfortable and feel like it gave a really good fit. 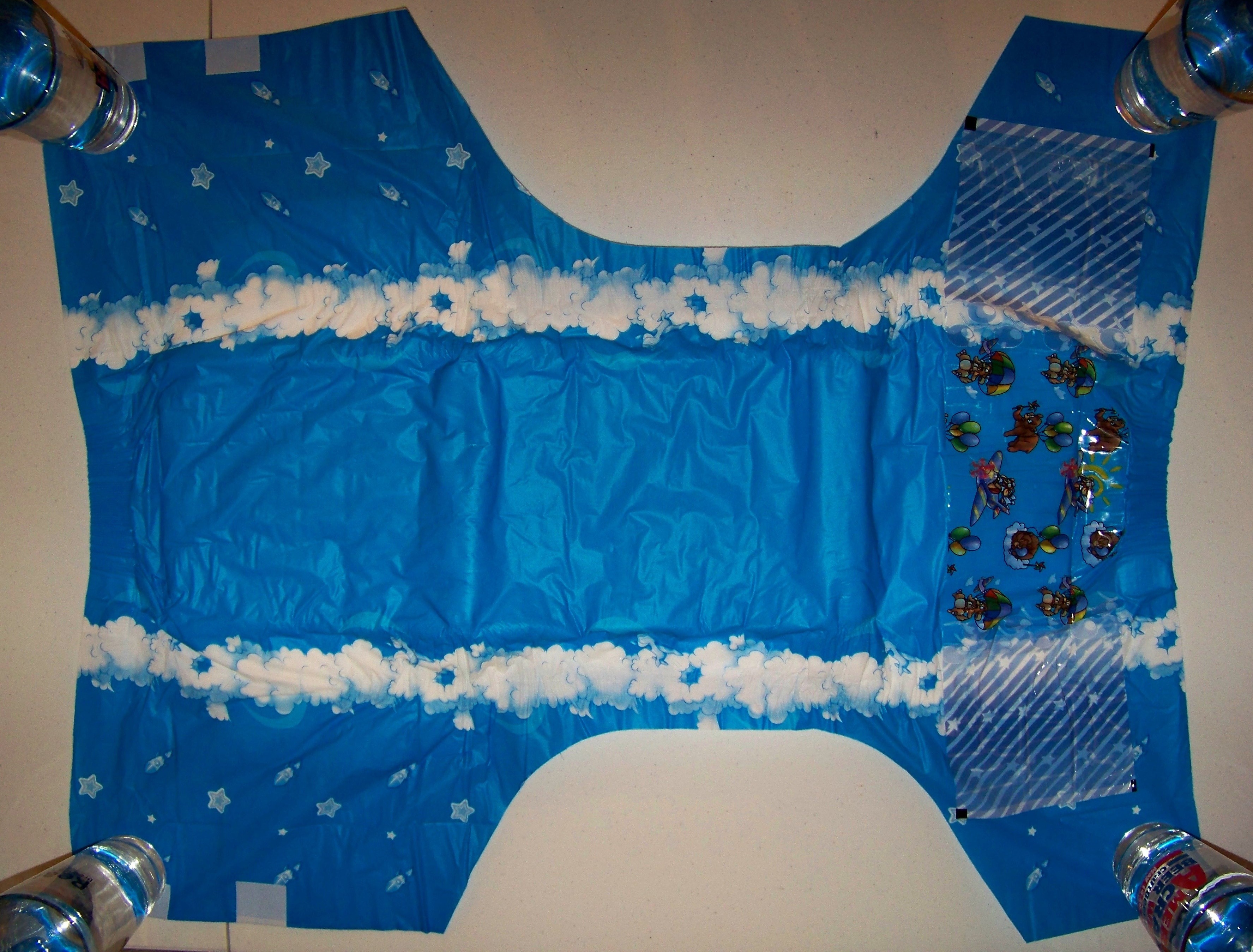 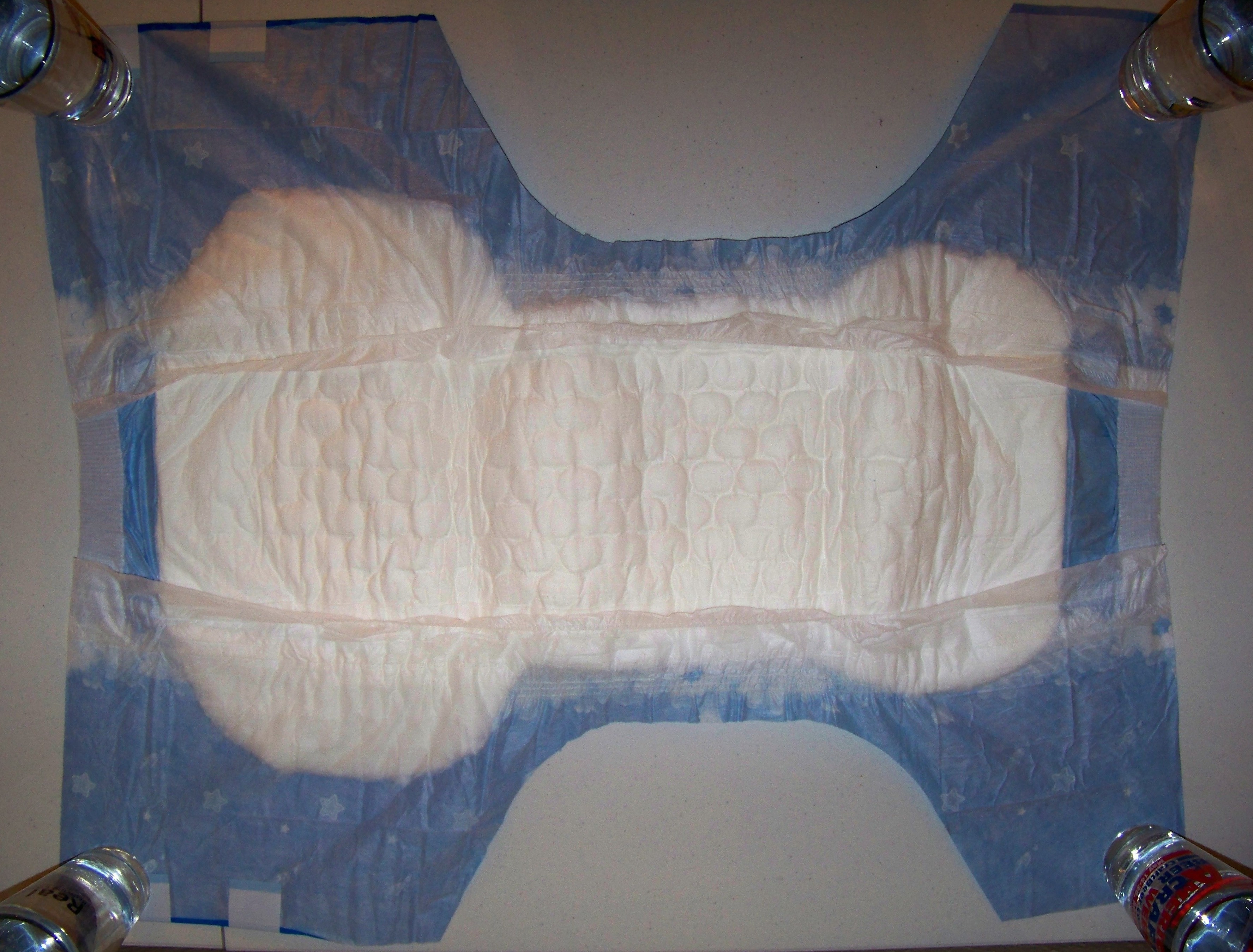 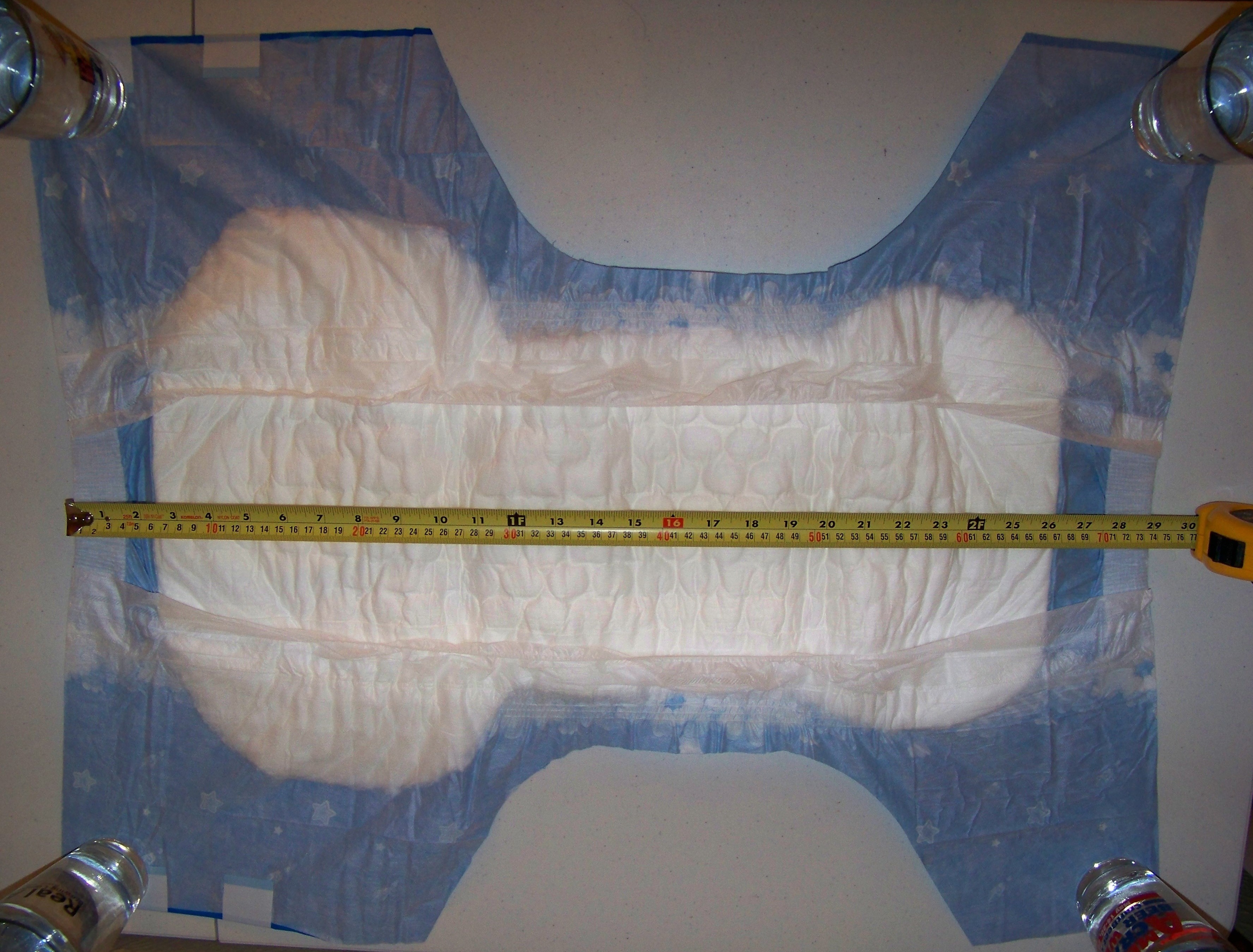 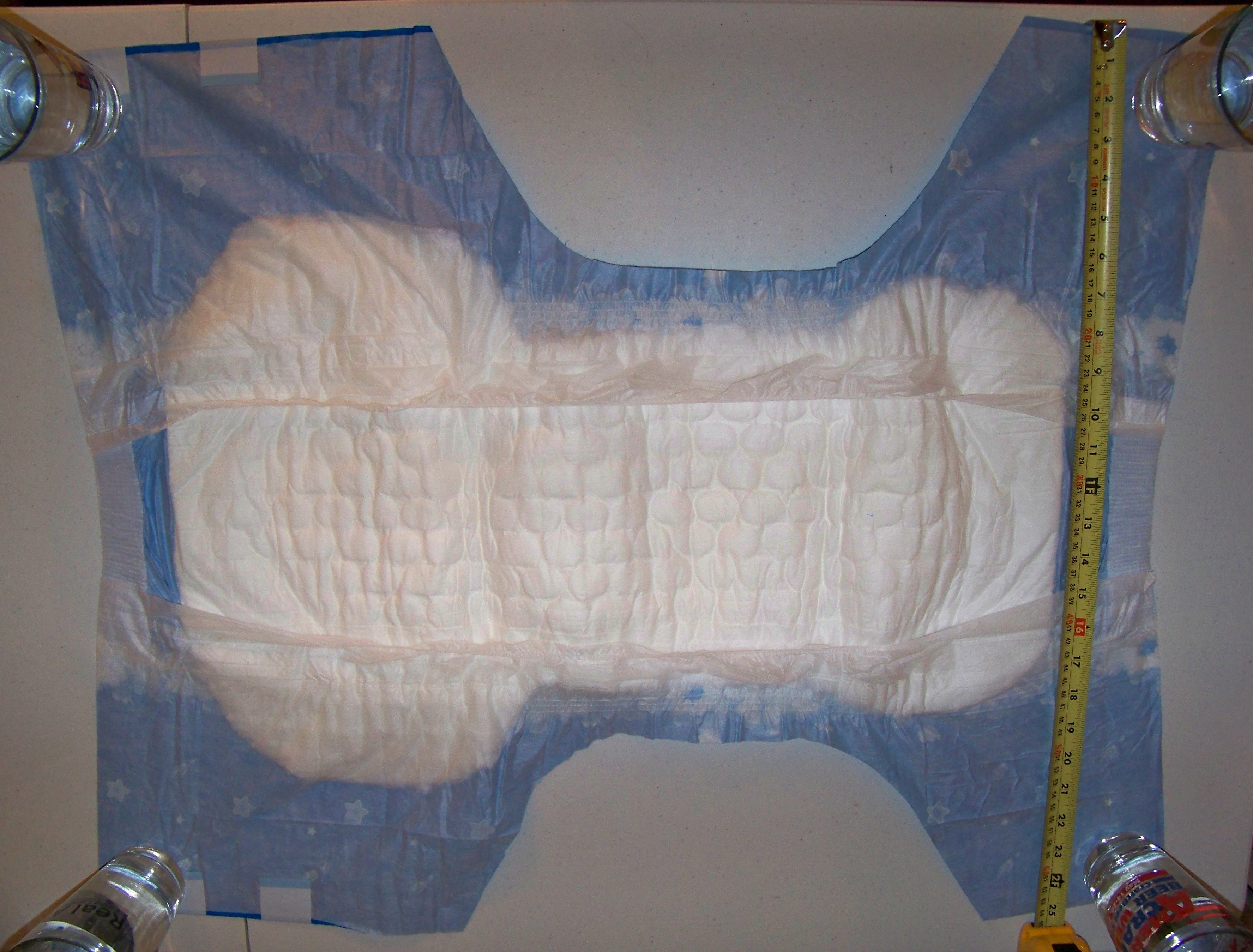 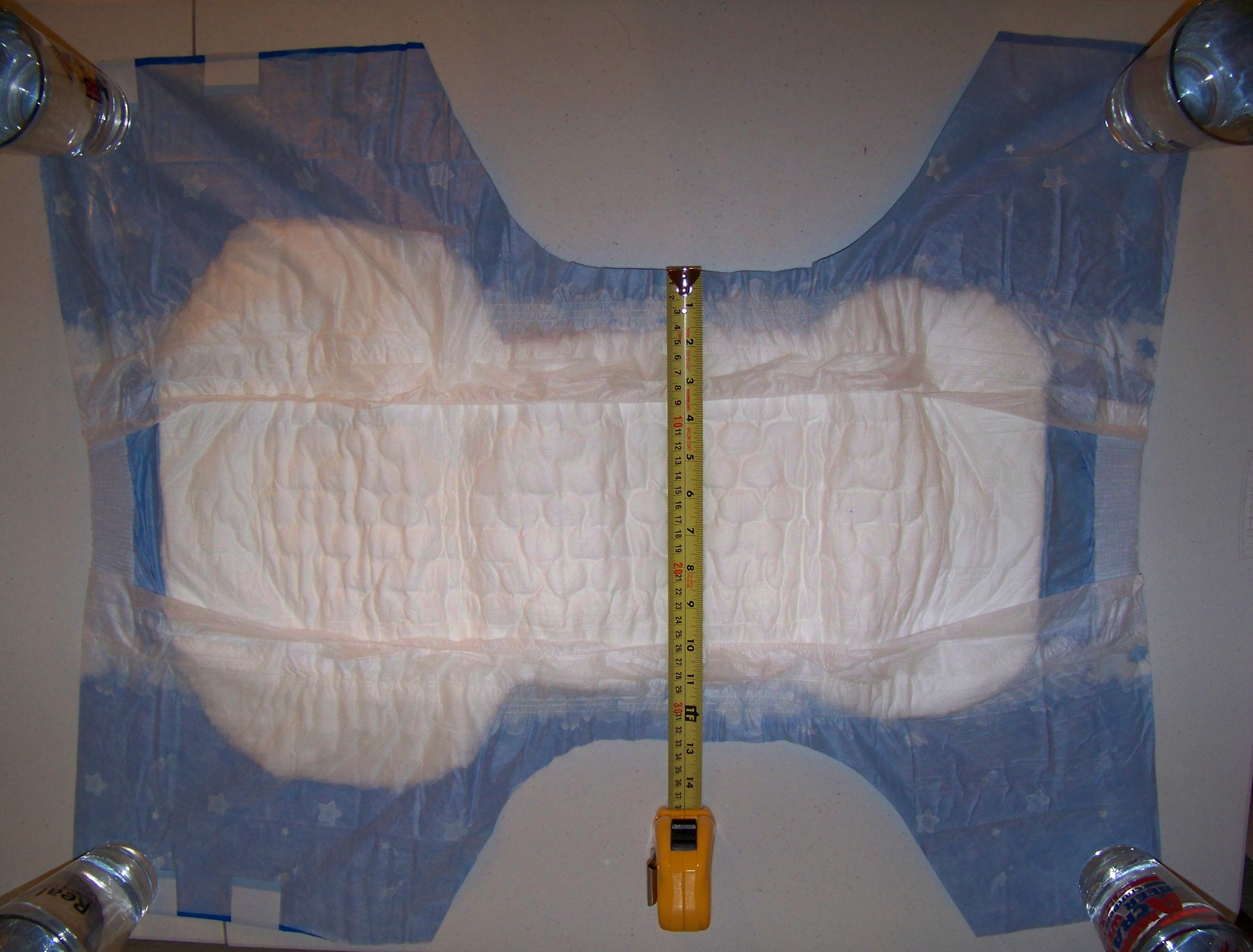 
To test the capacity of this diaper quantitatively, I ran a test to simulate use. I put a diaper on and then repeatedly poured water into the front of it in 100 mL increments and sitting down in a chair for 30 seconds each time to give the diaper a chance to absorb the liquid, pace the process, and see if it would leak when sitting.

The diaper swells substantially and at a higher multiple than many other diapers that begin this thick while dry. I folded the diaper back up to compare its thickness to a dry diaper. It had expanded to roughly 10.8 cm (4.2 in), about 3.3x its original size. The tapes held throughout this test.


I put on a fresh diaper and wore it while going about ordinary activities. The diaper lasted a total of 6 hours. During my test, I had a half-dozen or so moderate wettings, but did not flood it.

With a 36" waist, I am in the middle of the listed size range for the medium Amor. I normally wear size medium in other diaper brands. This diaper seemed to fit my size and frame particularly well, and I was really fond of the snug, encompassing fit in back that appears related to the disproportionately tall back wing.

The tapes held well in my tests. This has been a common problem historically with "premium" diapers in the past, but it's a feature that has improved dramatically in the past few years among ABDL diaper brands. The DC Idyl advertises high-quality tapes and delivers on that promise.

The plastic gives a fairly typical crinkle, comparable to other diapers. This diaper uses an unusually thick-feeling plastic backing.

This is a high-quality, "premium" diaper with several aspects that I feel are well-designed and no major drawbacks in my testing, but it is nonetheless expensive compared to similar other high-end ABDL diapers at the $2.15 price point. At this price, one pays a premium for the gender-specific print and the particular fit – both of which I can see being very appealing to some ABDLs.

If you're interested in gender-specific diapers, then this diaper and the companion DC Amor uniquely fill that niche. As just a high-quality diaper, this diaper places somewhere favorably amongst the pack, and is definitely worth giving a try.
Last edited: Sep 25, 2016
H

I am wondering how these would compare to the newer, lighter pastel ones coming out. Hoping to see a review of those soon. Thanks.
M