CVS Day & Night Fitted Briefs Maximum Absorbency is a common drugstore brand to which almost anyone should have access. They are cloth backed diapers with a Velcro-style hook-and-loop design. Having Velcro-style tapes is rather convenient if you're new to wearing and you have to adjust the tapes a lot. It's also great for those who want to wear publicly since it's pretty discrete.

I am reviewing the size medium diaper. The diaper is rated for a 32" to 44" waist, and my waist size happens to be right in the middle of that range. This diaper also comes in large and extra-large which fits 45-58" and 59-64" waist lines, respectively. I purchased a 20 pack from CVS in May of 2013. 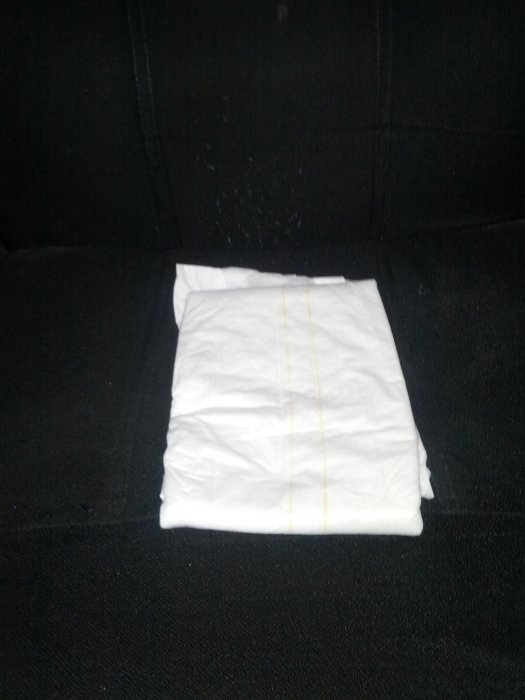 
In order to measure the dry thickness of the diapers, I stacked 3 of them and placed a heavy book on top. The compressed height of the stack was 6 cm (2.3 in) which yielded a height of 2 cm (0.8 in) per diaper. 
The diaper features a standard double tape system, however, unlike many diapers, the tapes on the CVS brand are Velcro-style and can be reapplied many times without losing much strength. The entire front of the diaper is an acceptable landing zone for the tapes which allows for easy adjustment. 
The external feel of the diaper is a bit slippery to the touch and a bit wrinkly from compression in the package. The diaper is fairly quiet under clothing and doesn't create much of a diaper bulge. The wings are a mesh like material with no protective padding which makes the diaper somewhat prone to leaks if you're lying on your side. There are not any standing leak guards on this diaper. 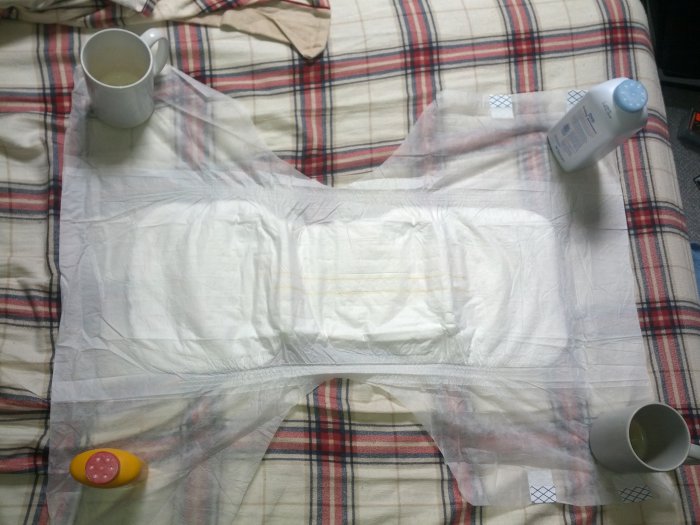 Front and Back of the Unfolded Diaper, Respectively 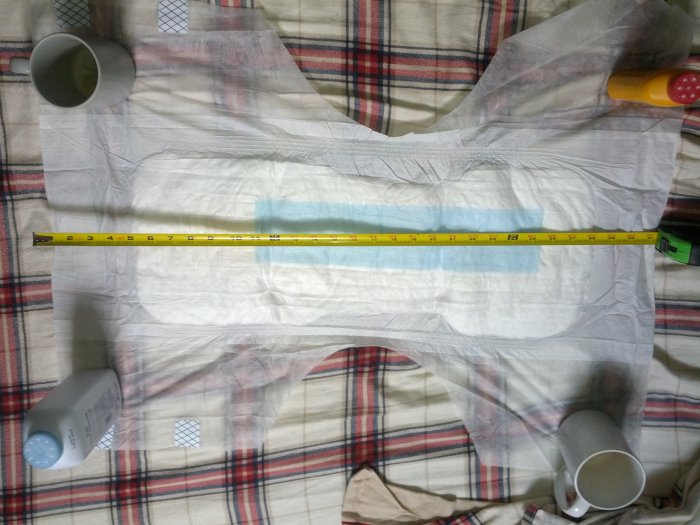 
In order to determine the capacity of this diaper I performed a paced wetting test. I simulated wetting by pouring 100 mL increments of water down the front of the diaper, and then sat down in a chair for 30 second to check for leaks. I noted when the diaper first began to feel wet as well as when small and major leaks occurred. At the 600-700 mL increment, the diaper became noticeably wet near the edges. Later at 800 mL, small leaks began to form near the leg openings. Finally at the 900 mL increment, the diaper started leaking significantly and I ended the test.

After the test, I refolded the diaper and placed it next to a dry diaper for comparison. The wet diaper swelled to approximately 6 cm (2.3 in) after the test. 
Concluding this test, I changed into a fresh diaper and wore it for the rest of the day while going about ordinary activities to test how it held up. The diaper lasted about 3.5 hours during which I had 2 moderate to large wettings and a few smaller trickles.

I have a 36" inch waist which puts me slightly below the middle of the range advertised for this diaper, but it did fit me very well. I think there is enough give in the diaper to accommodate a few more inches in the waist, however, I am not sure that I'd want to use it if I was on the larger end of the size range.

The tapes are very easy to use, and the ability to unfasten them is very convenient if you want to take it off and get a snug fit in putting it back on. I have not had any problems with these tapes pulling themselves off during the night. In fact, the padding seems to break down and clump before the tapes become unusable.

As mentioned above, the mesh wing without padding makes me nervous about using this diaper in any position other than sitting or standing.


These diapers are quite affordable in addition to being easily accessible. A case of 80 diapers can be ordered for about $35 ($0.43 per diaper) online from CVS, and the price in store is slightly above that at about $10 ($0.50 per diaper) for a pack of 20 diapers. They are especially affordable if they happen to be on sale as the price can drop to $7 or lower. I think that this is an excellent diaper for someone just starting out with the ABDL scene because it is both very affordable as well as easily accessible. The tapes on the diaper are forgiving, and it can stand up to at least one good wetting or a few paced wettings. The small size of the diaper allows it to be discreetly worn under clothing without arousing suspicion.

These and their Walgreens twin aren't bad if you can only wear for an hour or two. In my experience though you'll get a handful of smaller wettings or 1 flood and they are done. If they start to feel squishy it may already be to late.

Never even thought about these and decided to try them because of this review.

Always assumed all store brand cloth backed disposables were too low quality to reliably hold 1 wetting but I was wrong.

Great if you're a one and done type of wearer or like changing often.
A

I'd love to see a review of their stretch fit briefs. Can't find any info on them.
D

Diapers like these are ones I'd want to go number 2 in because I wouldn't feel like I'm pressured to keep it on for too long like a more expensive AB diaper.

they're my brand of choice for at night, am a abdl, but these definitely help with my nocturnal enuresis(bedwetting, am a seriously heavy sleep) and if you have extra care rewards, you can get coupons that'll knock the price to anywhere from 20% off to even down to $3/pack.

Anuric said:
These and their Walgreens twin aren't bad if you can only wear for an hour or two. In my experience though you'll get a handful of smaller wettings or 1 flood and they are done. If they start to feel squishy it may already be to late.
Click to expand...

I've had these before and they aren't bad, but I like the Walgreens Certainty Stretch Briefs better. They have standing leak guards at least whereas the CVS ones do not.

I saw these in CVS the other day. I was debating buying them to try them out, but I had already spent lots of money that day, I decided on another time. Thanks for the review, I'm glad to see I can rely on them for quality.

Don't forget the turkeys! They deserve love too!

I like the Walgreens and I can wear them 3 1/2 to 4 hours at a time depending on how much you have to drink. If I were to drink a lot less I can probably get 4 1/2 to 5 hour out of them
T

Tried this a few years back and they're definitely decent! It would reliably hold 2 wettings and I thought it swelled up a decent bit for its size and get squishy. They are a little thin and narrow, but for a store brand and for someone just starting out, they're just fine!

The stretch briefs from CVS on the other hand are not worth it in my opinion. They only reliably hold 1 decent wetting and they just don't fit the same as a traditional brief.
Share:
Twitter Reddit Pinterest Tumblr WhatsApp Email Share Link
Top