Boy, did these bring back memories! I didn't know anyone had made videos of this trip back in 1981. My wife and I, along with her brother, cousin, and dad were on this very trip on 10/3/81. Her folks had come up from VA to see one of the last baseball games of the season at Orioles stadium in Baltimore. When we told them about the train trip they wanted tickets too. The trip ran from Baltimore, MD to Martinsburg, WVA. At Frederick Jct., which you see in one scene, we all got off for a photo runby. Somewhere behind the person shooting this video we were all standing out in a farm field (corn crop had already been harvested) taking our pics. I'll have to get my photos out to see if I spot the video guy. Would love to take a trip like this again. Sadly, these excursions are harder to find these days thanks in part to very high liability insurance requirements by host railroad companies. Hope you enjoy these videos as much as we enjoyed being there that crisp, Fall day.

happy times lol
the railway station here has a lot of old locomotives like that (well... very old ones - not sure if they're like that!), since it's not used as a public train station.
We even have Thomas and crew! yay! ^.^ 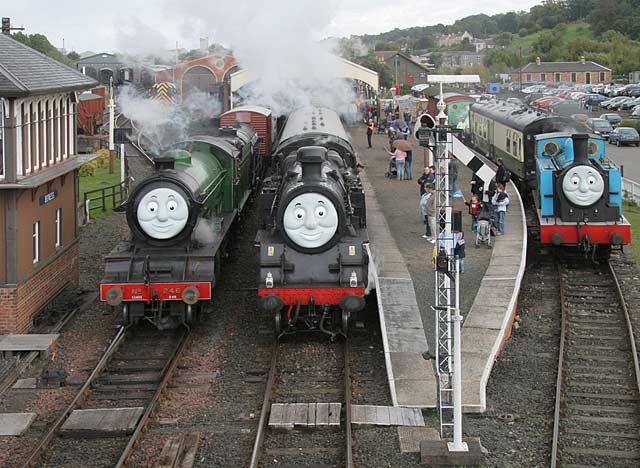 A nearby city has a "Steam Train Fest" every 2 years, so I'Ve seen a fair amount of steam trains in action.

Steam trains arrive from all over the country, and if you know where to hang out, you can get some decent shots

Then they store the trains on an abandoned good yards for people to look at during the afternoon.

[the rest...forum won't let me post more than 4 images in one message!]

Two years later, the weather was really bad during the entire day, so I didn't get to see much. After waiting forever on the outskirts of the city, I finally got a shot of the approaching 18201 steam locomotive (built in 1961 for eastern Germany):

Here'S a better shot in the abandoned goods yard:

There were, of course, other steam locomotives.
Small ones:

and medium sized ones:

I have videos too, but they're still on my camcorder.

Thanks Dash and Peachy for the neat steam engine photos! I have a question for either of you. Are European steam engines also designated by their wheel arrangement? For example, in Peachy's photo of #18201, over here it would be called a 4-6-2 or "Pacific" type locomotive, having 4 pilot wheels, 6 drivers, and 2 trailing wheels under the cab. We also had an "Atlantic" type which was a 4-4-2. They had large driving wheels and were primarily used on high speed passenger runs in the flat, coastal areas of the mid-Atlantic states.

I like the way the wheels and running gear are accented in red in the photos. In the US, most steam locos in freight service were all black. However, passenger train steam engines usually had colors matching the coaches they pulled. Steam engines still running on tourist railroads over here are dressed up a little - wheel tires painted white, front of the smoke box painted silver, etc. Occasionally, the whole train, engine and all, are decked out in a certain color scheme like the one we rode on in the vids.

Some years back, a couple tourist railroads actually ordered 2 brand new steam engines from China, since that country still was building them. I believe they were delivered with a similar red trim on the wheels and lower areas. They were either 2-8-0s or 2-8-2s for wheel arrangement. It was something to see steam locos in this country with builder's plates showing a contemporary mfg. date instead of mid-20th century or older.

O that reminds me of an interesting fact i had a relative that worked on the B&O railroad.

genbaby said:
O that reminds me of an interesting fact i had a relative that worked on the B&O railroad.
Click to expand...

One of my fav train watching spots was at HX Tower on the B&O in Halethorpe, MD. One of the tower operators was a railfan and would let you come up in the tower to chat trains with him. Before most grade crossings were eliminated on the electrified Amtrak line, I used to sit by the Knecht Ave. crossing near Arbutus, MD and watch the endless parade of passenger and freight trains at that location. I lived close enough that I could hear the horn blowing from our house and know what type engine it was just by the sound of the horn. There was also a little used branch line that ran from Baltimore west to Catonsville, a distance of about 3 miles, which left the electrified line and passed closer through our neighborhood. In my teen years, I used to wait by the crossing near our house on Saturday morning to see the twice-a-week freight go by. It usually had about 3 to 5 cars - mostly coal bound for a State Hospital power plant - and was powered by a Baldwin-built diesel switcher. The crew got so used to me being at the crossing they invited me to ride up the line with them. The branch was in as bad of shape physically as the RR company (Penn Central by that time) was financially. There was plenty of weeds, rotting crossties, and loose joints. All during the Summer of 1968 I rode until there was a change in train crews. The last train ran in 1972. By that time the line was so overgrown from the then very infrequent (once or twice a month) passing of trains, you could hardly tell where the track was except at road crossings.

Much of the abandoned track is still there to this day. Here's a wbsite with recent photos of the line. In the photo showing the rails in the Beechfield Ave. pavement, where the bush is growing up in the middle of the track in the background is the spot I used to hop on the train when the flagman stopped to flag the crossing. The train was pushed caboose first going out to Catonsville which is about 2 miles behind the camera at this spot. Ahhh...the train memories.....

I know that the Metropolitan Line (London Underground) do roll the stream trains now now and again but I just don't know when.

Here are some photo I found on the web.
http://www.metroland.org.uk/steamonthemet/index.htm

HardcoreMickal said:
I know that the Metropolitan Line (London Underground) do roll the stream trains now now and again but I just don't know when.

Here are some photo I found on the web.
http://www.metroland.org.uk/steamonthemet/index.htm
Click to expand...

Thanks for the link, HardcoreMickal! Very nice looking, well maintained steam engines. Now, the second photo down would be considered a 2-6-2T over here. The suffix "T" denoting the fact that the tender is integral to the engine and not a detachable piece of rolling stock.

Pramrider said:
Thanks Dash and Peachy for the neat steam engine photos! I have a question for either of you. Are European steam engines also designated by their wheel arrangement? For example, in Peachy's photo of #18201, over here it would be called a 4-6-2 or "Pacific" type locomotive, having 4 pilot wheels, 6 drivers, and 2 trailing wheels under the cab. We also had an "Atlantic" type which was a 4-4-2. They had large driving wheels and were primarily used on high speed passenger runs in the flat, coastal areas of the mid-Atlantic states.
Click to expand...

I checked with Wikipedia, and they say that we use a different system in Europe, although the basic idea of counting the wheels is the same:
You can find more about it here.