Fruitkitty said:
The ConfiDry 24/7, typically called just "Dry 24/7" in the ABDL community, is a high-end "premium" diaper. It is an all-white diaper with no prints which is marketed to the general, non-ABDL market. It is sold in small, medium, and large sizes, advertises every bell and whistle that one can typically find on a diaper, and claims a high capacity with the pitch that just a few changes will last through a typical day.

This diaper was taken off the market for over a year in order to move production and make revisions to the product. The new version was relaunched in late 2014.


The Dry 24/7 has an all-white appearance, with no markings whatsoever. There is no distinct landing zone panel for the tapes. 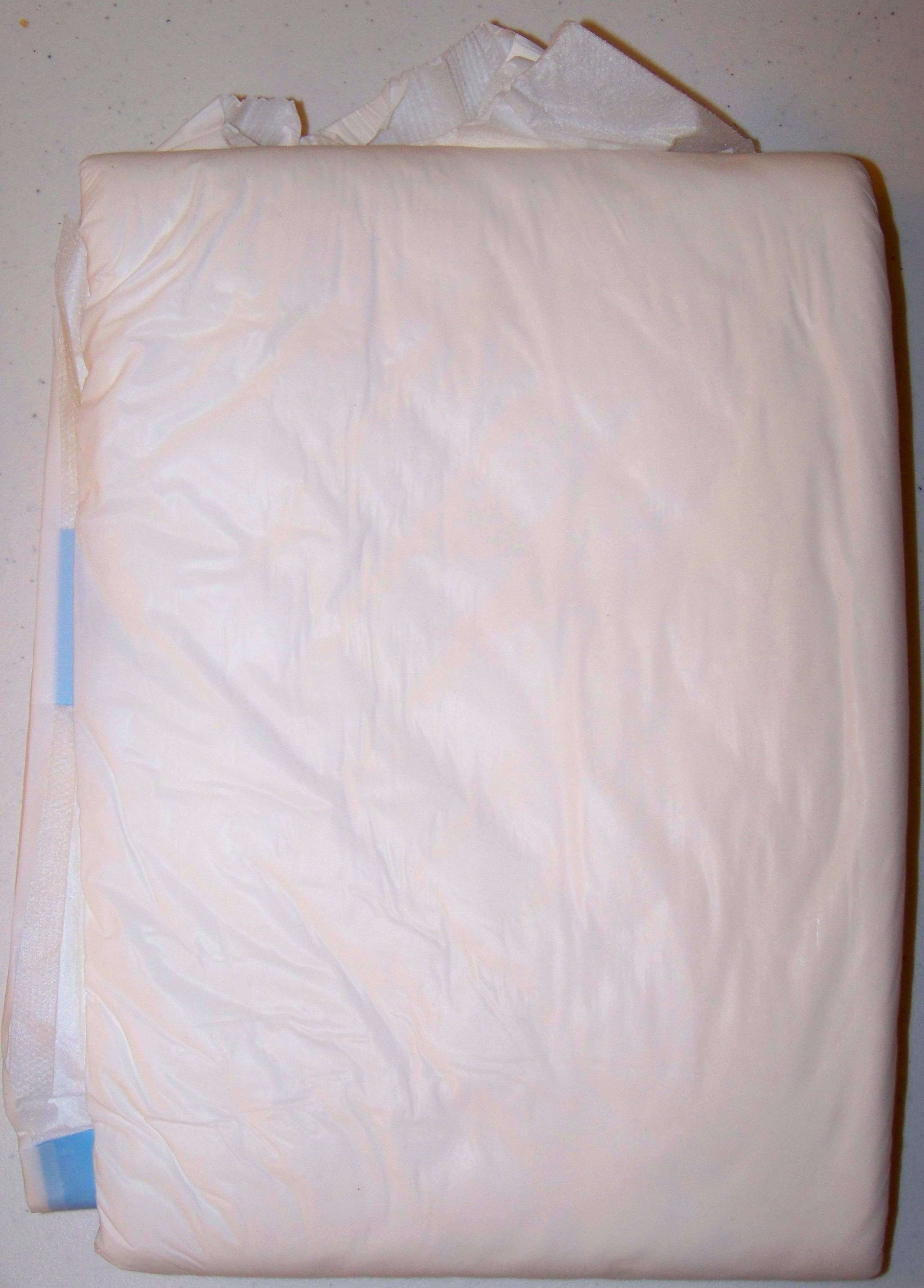 
To test their dry thickness, I stacked three diapers on top of each other and placed a heavy book on top of them, and measured their height. Together, the 3 diapers had a height of approximately 10.2 cm (4.0 in). Thus, the dry thickness of a single folded diaper is 3.4 cm (1.3 in). 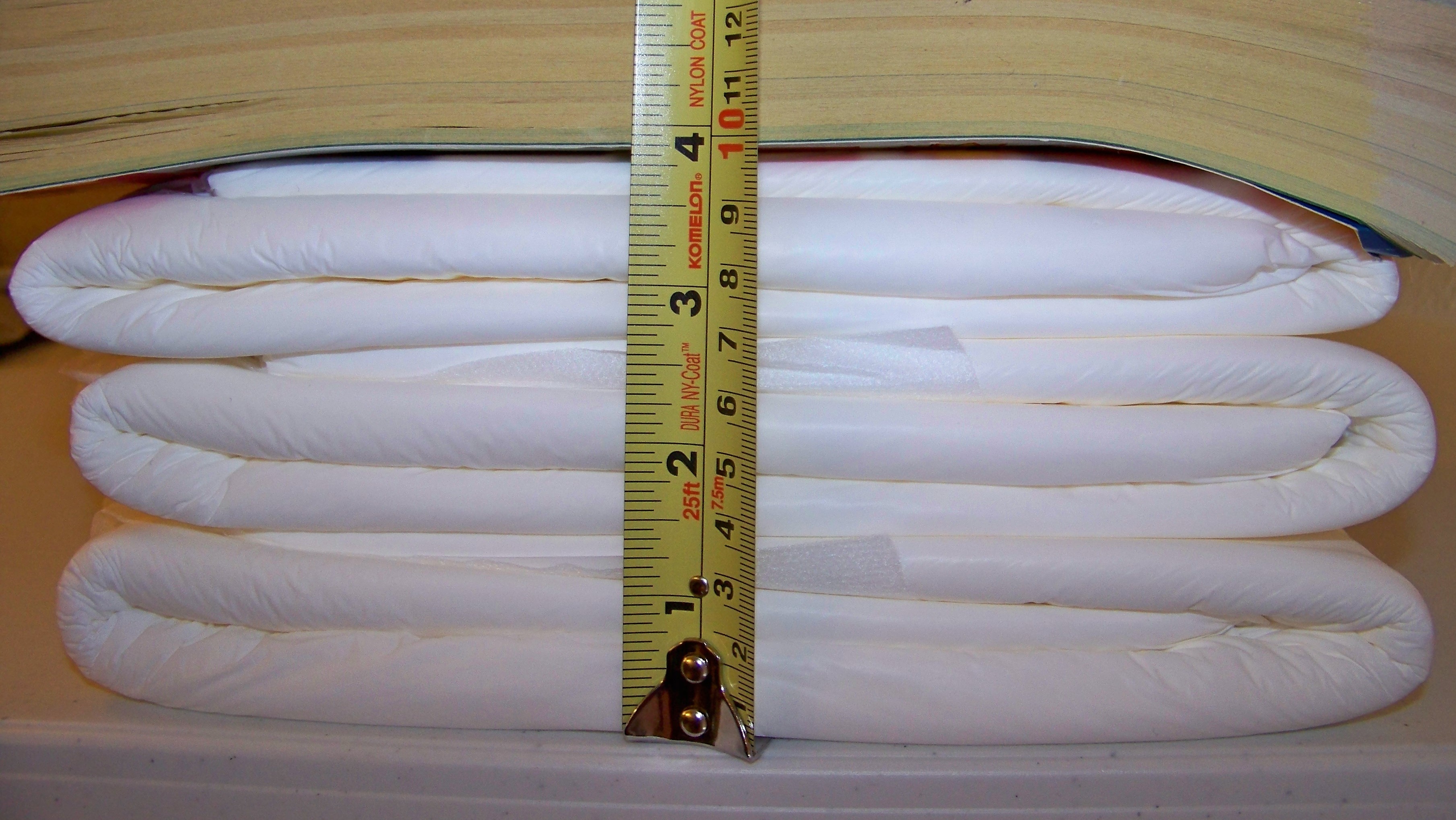 
The Dry 24/7 is one of the few diapers on the market to have a double tape system in which each tape has both a top tape and a bottom, "second chance" tape. The top tape is white and the bottom is blue. If the blue tape pops or you otherwise want to change the tape placement, you can just peel off the white tape and use it to re-tape the diaper. It also makes it easy to tape up the diaper for disposal after use. It's a welcome feature that saves a lot of tape-related headaches with the few diapers that have them. 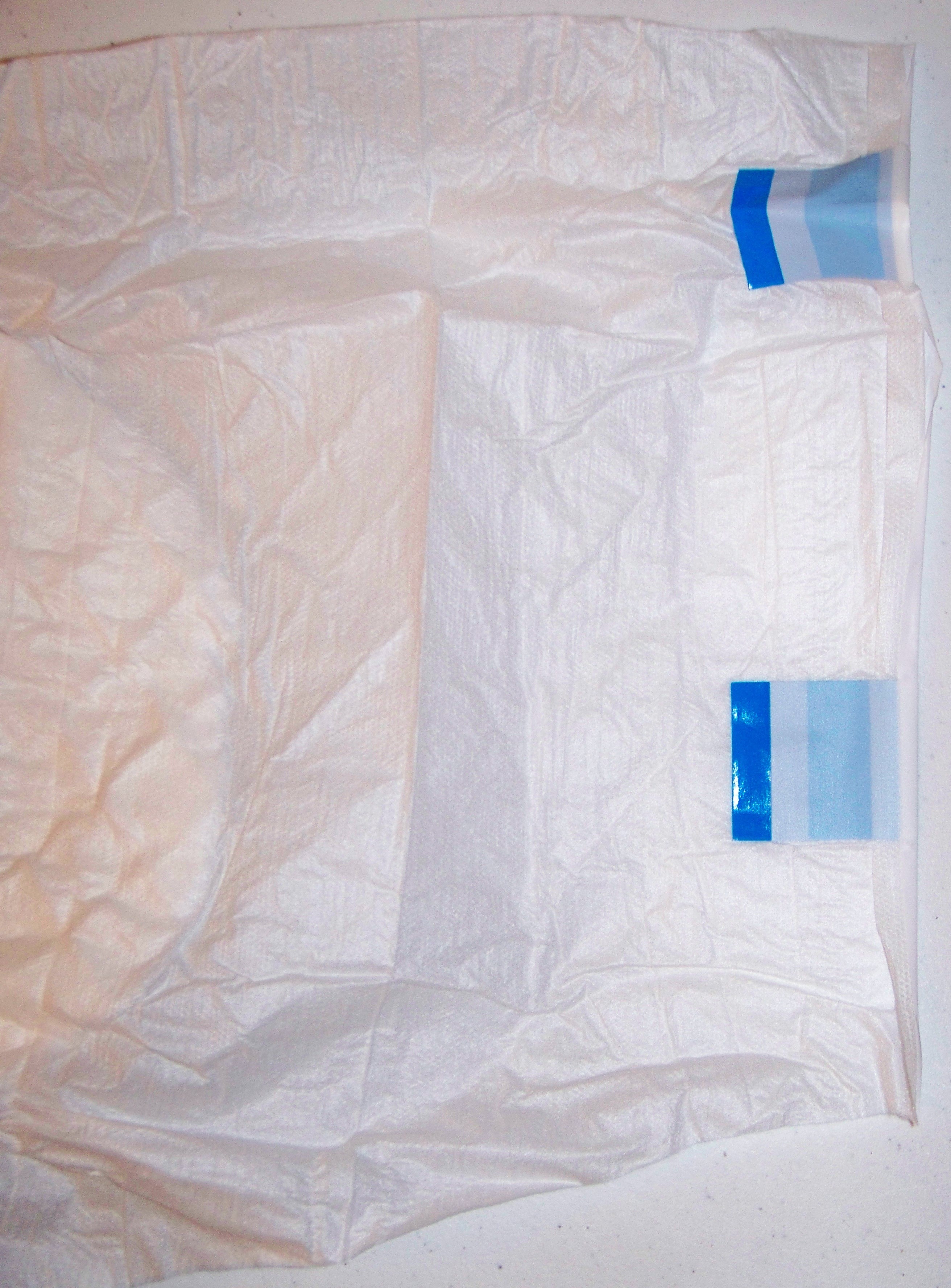 
The outside cover of the diaper feels substantial, with plastic that feels relatively thick and soft but has a lot of friction to the touch. It has a fairly typical and moderate crinkle. The inside is all white, and the padding is arranged in an hourglass shape with a diamond pattern which is visible through the backsheet. It has a dense, packed-cotton feel to it, which is harder than that of many other diapers. The diaper has standing leakguards, and elastic waistbands in both the front and back. 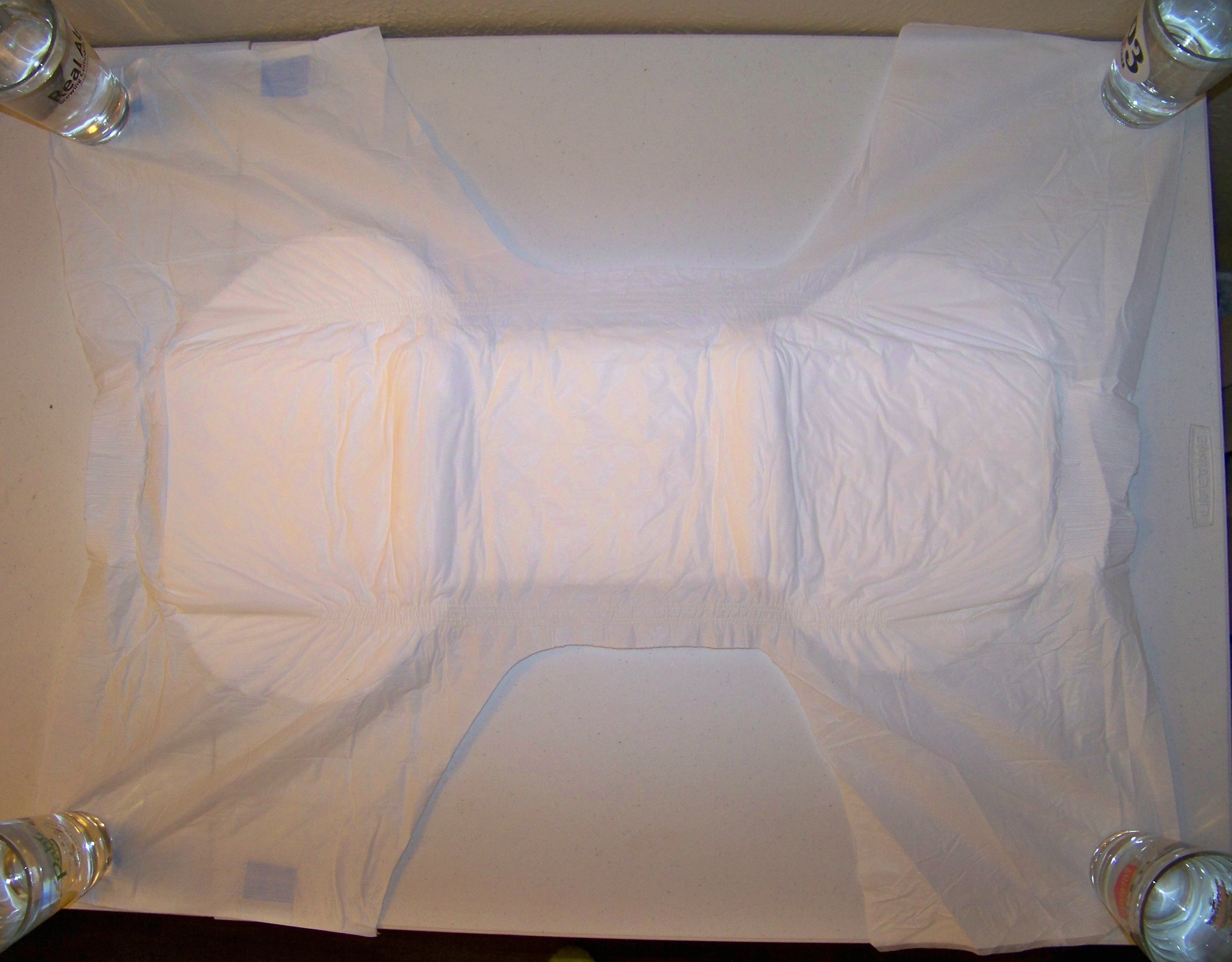 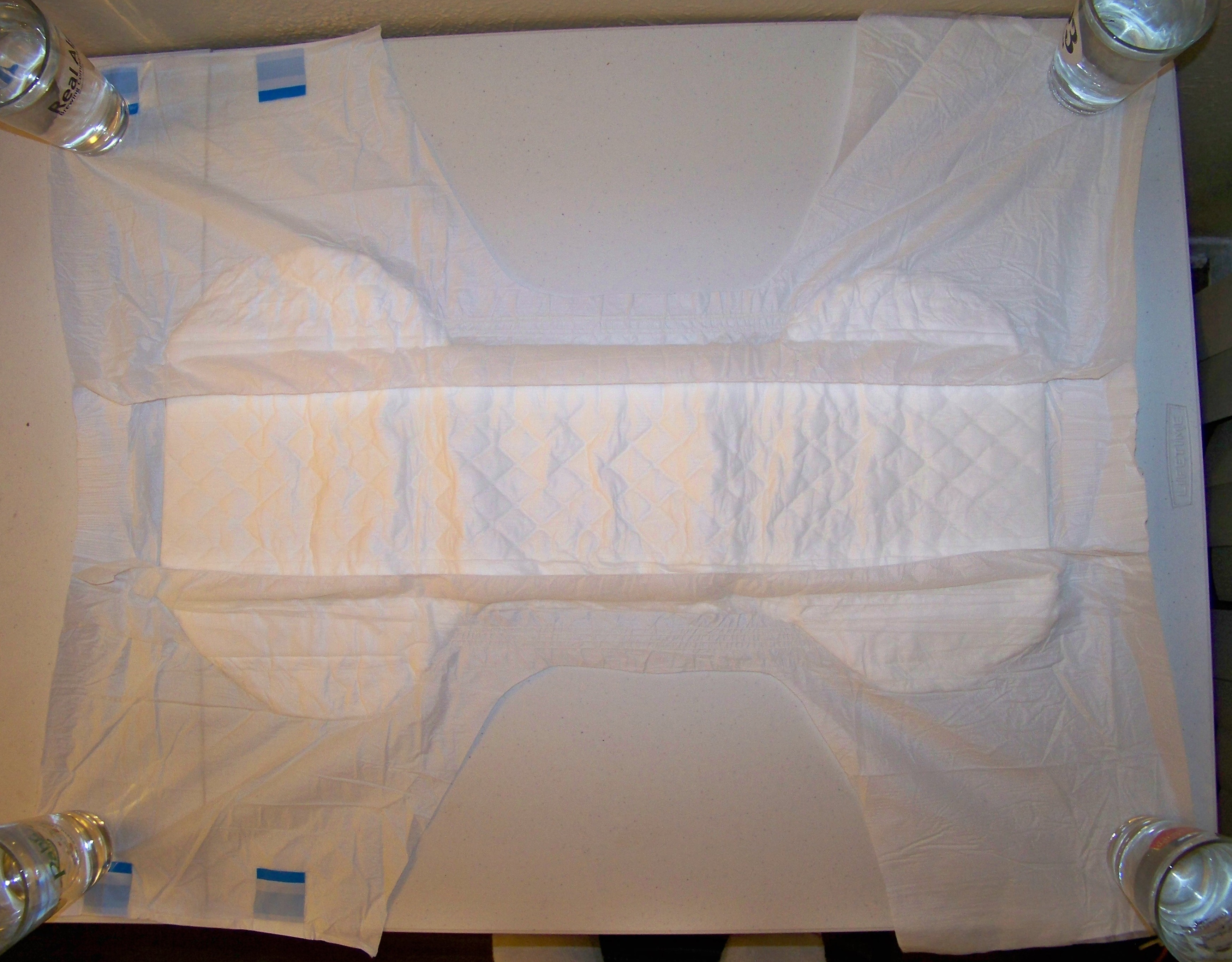 
With the diaper outstretched, it measures 81.1 cm (31.8 in) in length, 72.4 cm (28.5 in) in width at the wings, 27.8 cm (11 in) in width at the center, and 16.3 cm (6.5 in) in width between the leak guards. It is a noticeably large diaper for a medium size, and is in fact the only medium diaper that I've ever reviewed which stretched over the edges of my table. Dry 24/7s have a well-earned reputation for running larger than comparable diapers. 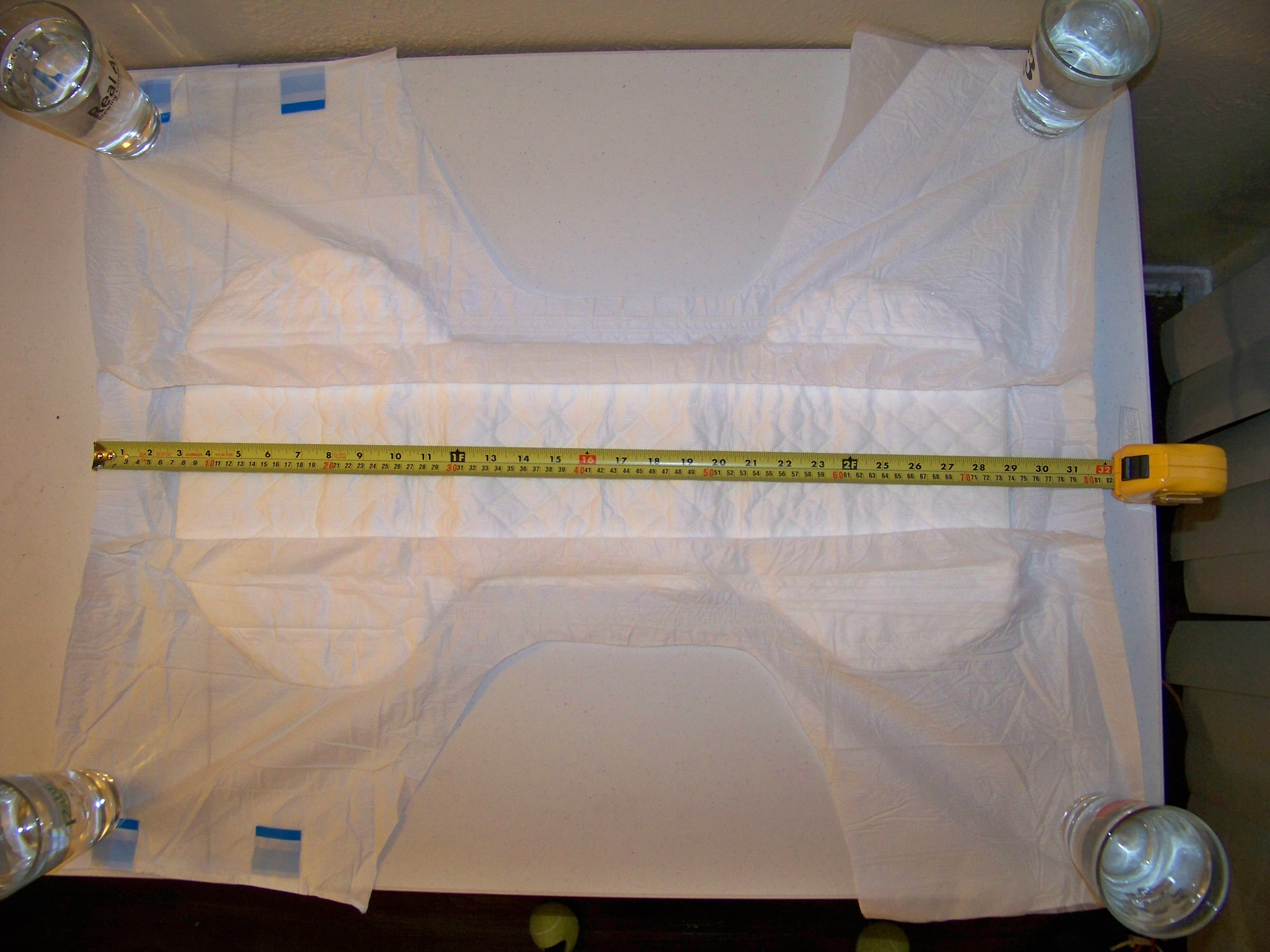 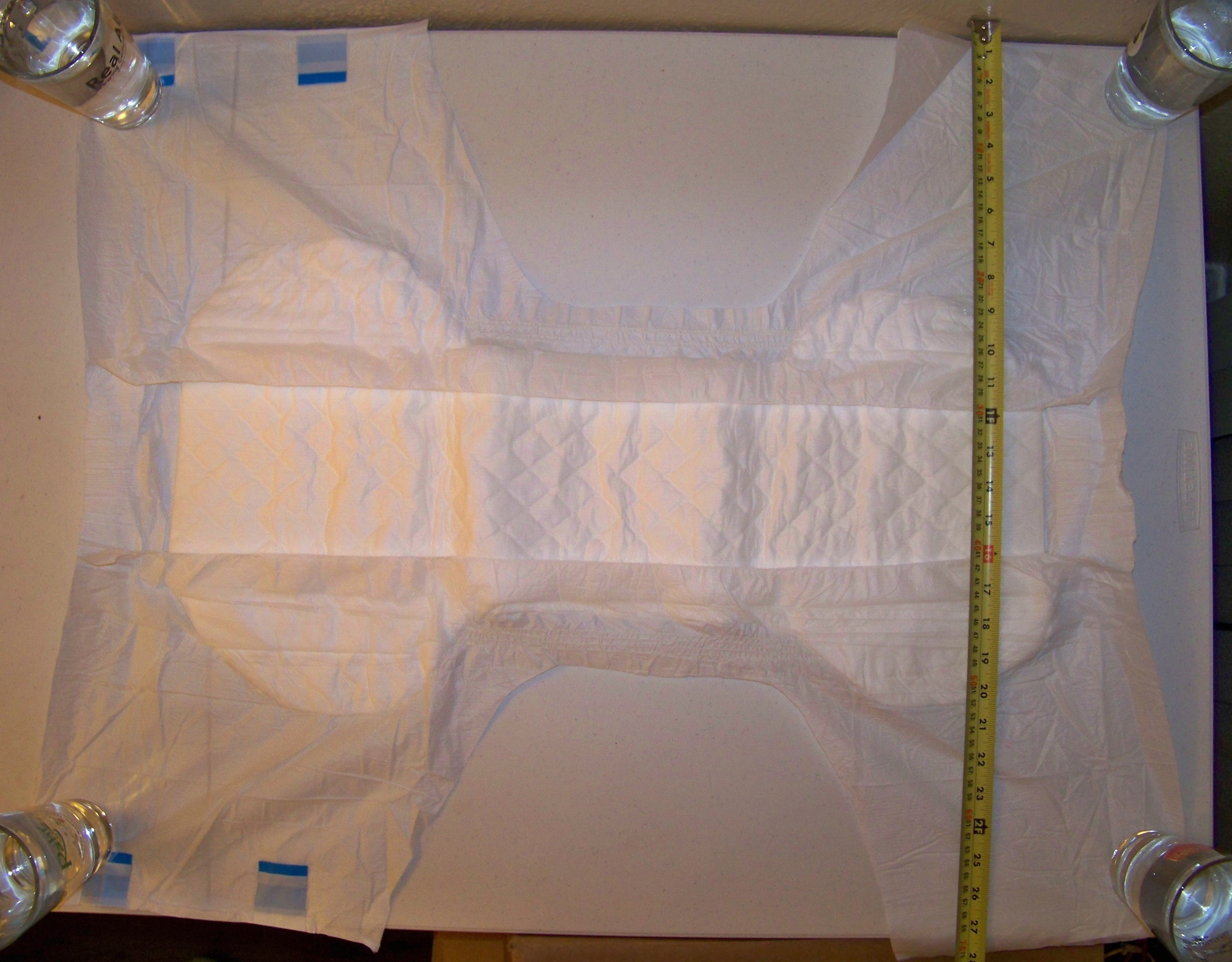 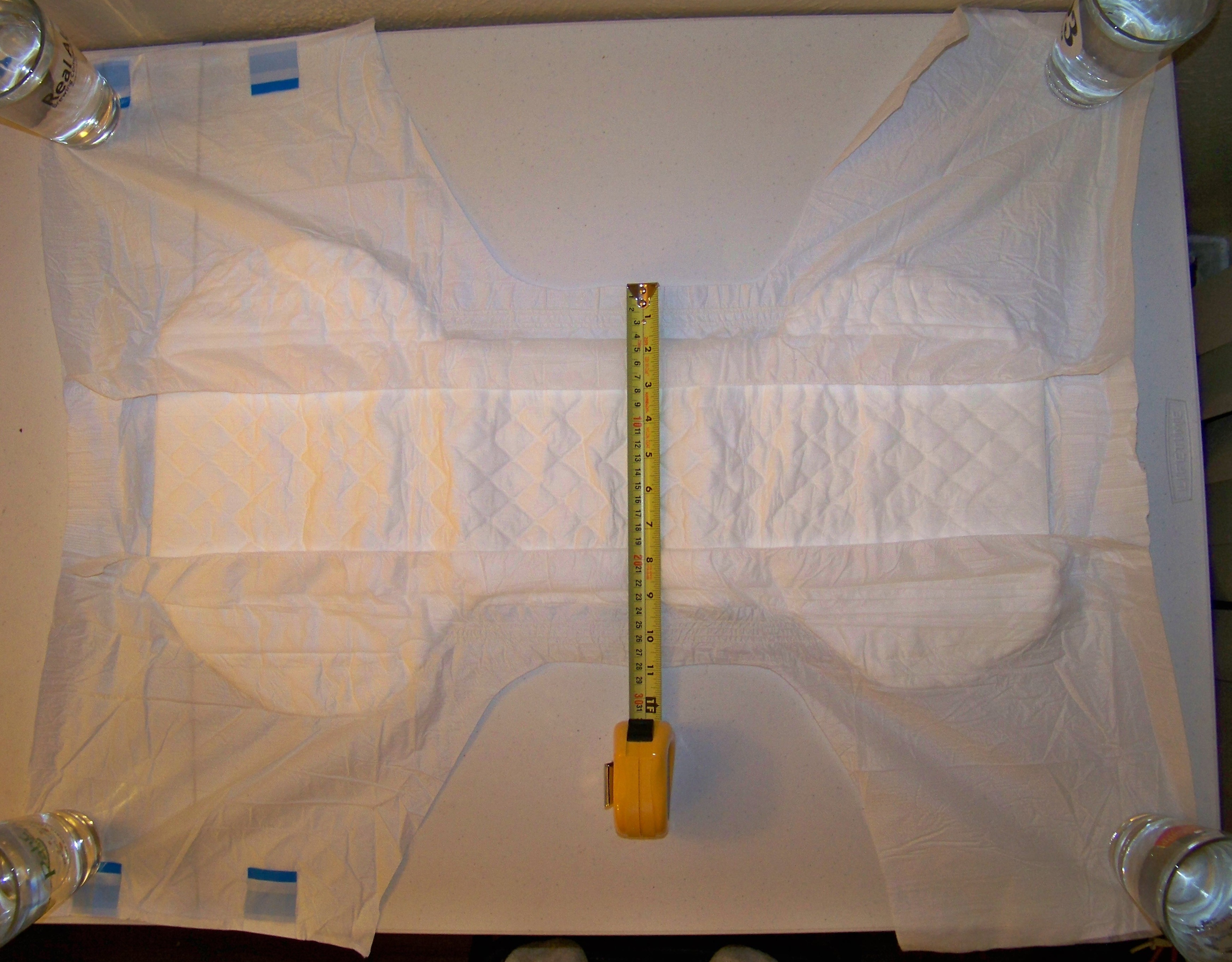 
To test the capacity of this diaper quantitatively, I ran a test to simulate use. I put a diaper on and then repeatedly poured water into the front of it in 100 mL increments and sitting down in a chair for 30 seconds each time to give the diaper a chance to absorb the liquid, pace the process, and see if it would leak when sitting. At 1100 mL, I noticed that water felt like it was running near the cuffs when I added increments. At 1400 mL, an upper tape began to pull. At 1500 mL, I started feeling wet while I was sitting. At 1600 mL, I started noticing wetness around the leg cuffs. At 1800 mL, I felt like I was sitting in a pond. At 1900 mL of water, the diaper began to leak on my chair, and I ended the test.

I then took off the full diaper and folded it back up to compare its thickness to a dry diaper. It had expanded to roughly 10.1 cm (4 in), almost exactly 3x its original thickness.

Notably, while this diaper held out as long as other top-tier diapers, for almost half the test, it felt very wet and as if it was close to leaking.


I put on a fresh diaper and wore it while going about ordinary activities. The diaper lasted a total of 3 hours, during which time I had several medium wettings and some minor wettings, but did not flood it. This diaper leaked much sooner than I expected, so I tried another, but again, it leaked after 3 hours.

With a 36" waist, I am in the center of the listed size range, but this diaper, which had measured larger than most other mediums and clearly felt larger when I wore it, fit different than other mediums. It was a looser, less snug fit, and I think that contributed to it leaking much sooner than I expected. Certainly, given the result of the quantitative test, I expected this diaper to be capable of lasting as long as other "premium" diapers, and perhaps on another person it would.

The tapes stuck, but the diaper also didn't get to a point where it put them under high strain. Moreover, I felt the diaper's larger fit made it a bit difficult to tape them particularly snug, but I imagine that this is highly dependent on the individual wearer and fit.

The diaper is fairly quiet. The diaper is dense and the plastic doesn't seem to have much space to move about.


I received a sample of these diapers for review from a fellow ABDL. They are available from XPMedical.com for 104.95 USD per case of 72. This works out to $1.46 per diaper, similar to other non-ABDL high-end, "premium" diapers, and a few pennies cheaper than the Abena M4 from the same vendor.

This is a great diaper at a competitive price, though I had problems that seemed to stem from the unusually large fit. I still saw great potential in this diaper otherwise, with top-tier capacity and high-quality design all-around. There are sporadic reports in the community related to problems with the tapes on this diaper, but my testing didn't seem to show the tapes to be any worse that is typical for high-end diapers, where pulling after the diaper has expanded substantially is a common problem.

This diaper has a unique advantage in being a very well-priced all-white diaper. Several ABDL manufacturers offer all-white diapers, but it is not very common for non-ABDL diapers to be completely free of markings. The fact that this one is all-white almost by default makes it the cheapest "premium" diaper in this category. Similarly, it has an advantage in being available in a size small, which few ABDL diapers can boast. It's a non-ABDL product with crossover appeal, which makes for a cheaper diaper available in a wider range of sizes.

Ultimately, this diaper stacks up well to other "premium" diapers, with similar capacity, similar price, and all of the higher-end feature that can be found on diapers.
Click to expand...

Working through both some Rearz Safari and BetterDry this week and next. I have to say, Rearz Safari is fun, as it's an all-day diaper, but the BetterDrys seem to provide a better experience, actually needing to change once in a while.
M

My favorite premium diaper...A nice all white thick crinkly plastic diaper like the ones I grew up with...No stiff tape zone or cartoony design...They fit perfectly...

This isn't the same dry 24/7 that used to be my favorite diaper many years ago. When they regrouped and it went off the market for some time, the new product was much less the diaper than it used to be.

Incontinent with CP looking for friends who get it