In parallel to the release of the Bambino Magnifico in fall 2016, a number of ABDLs reported that changes reducing thickness and capacity had been made to both the Bambino Classico/Teddy/Bianco line and the Bambino Bellissimo line.


Bambino products are sold in white semi-translucent packaging with a label on the side. The prints are visible through the white plastic packaging. 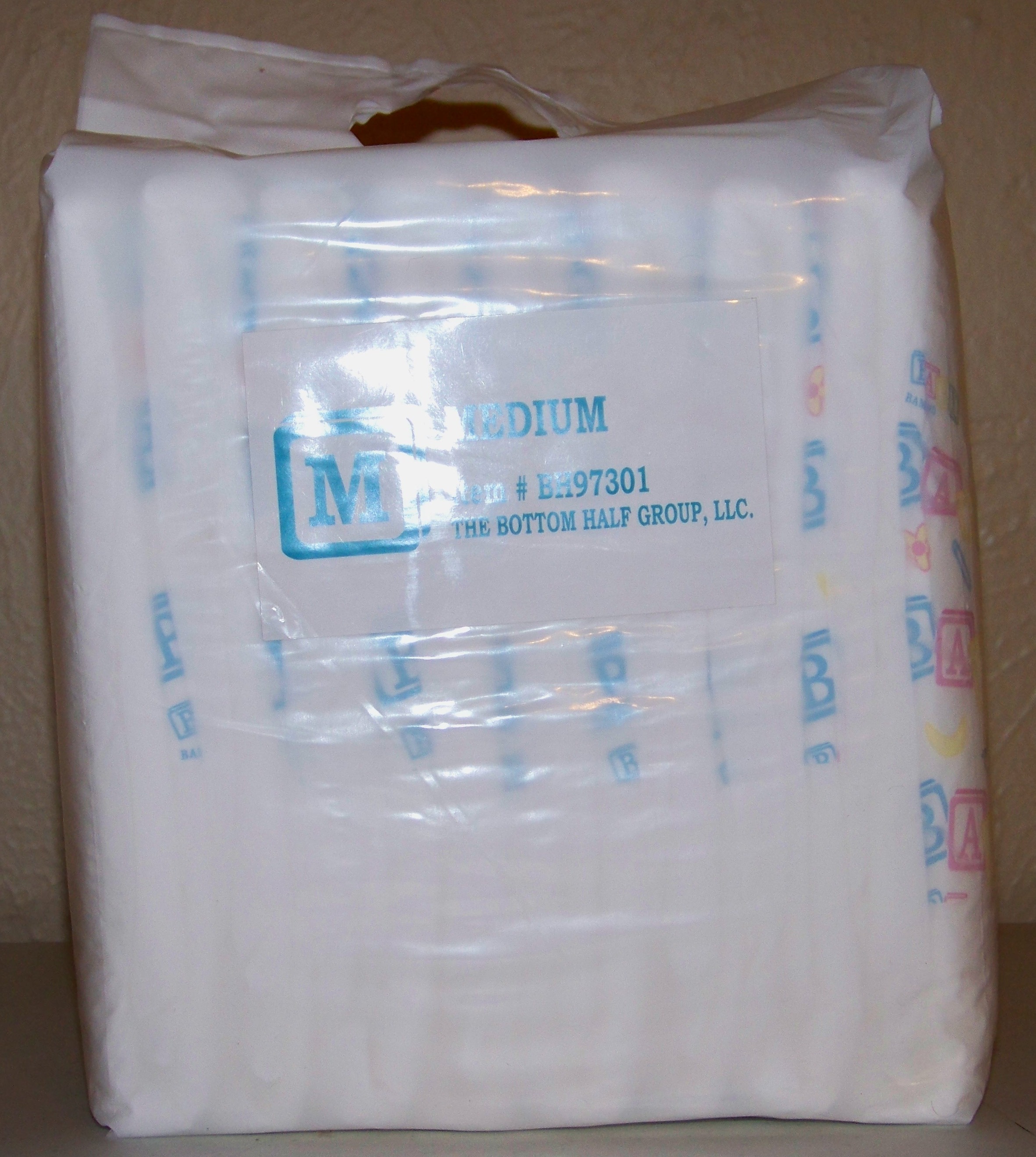 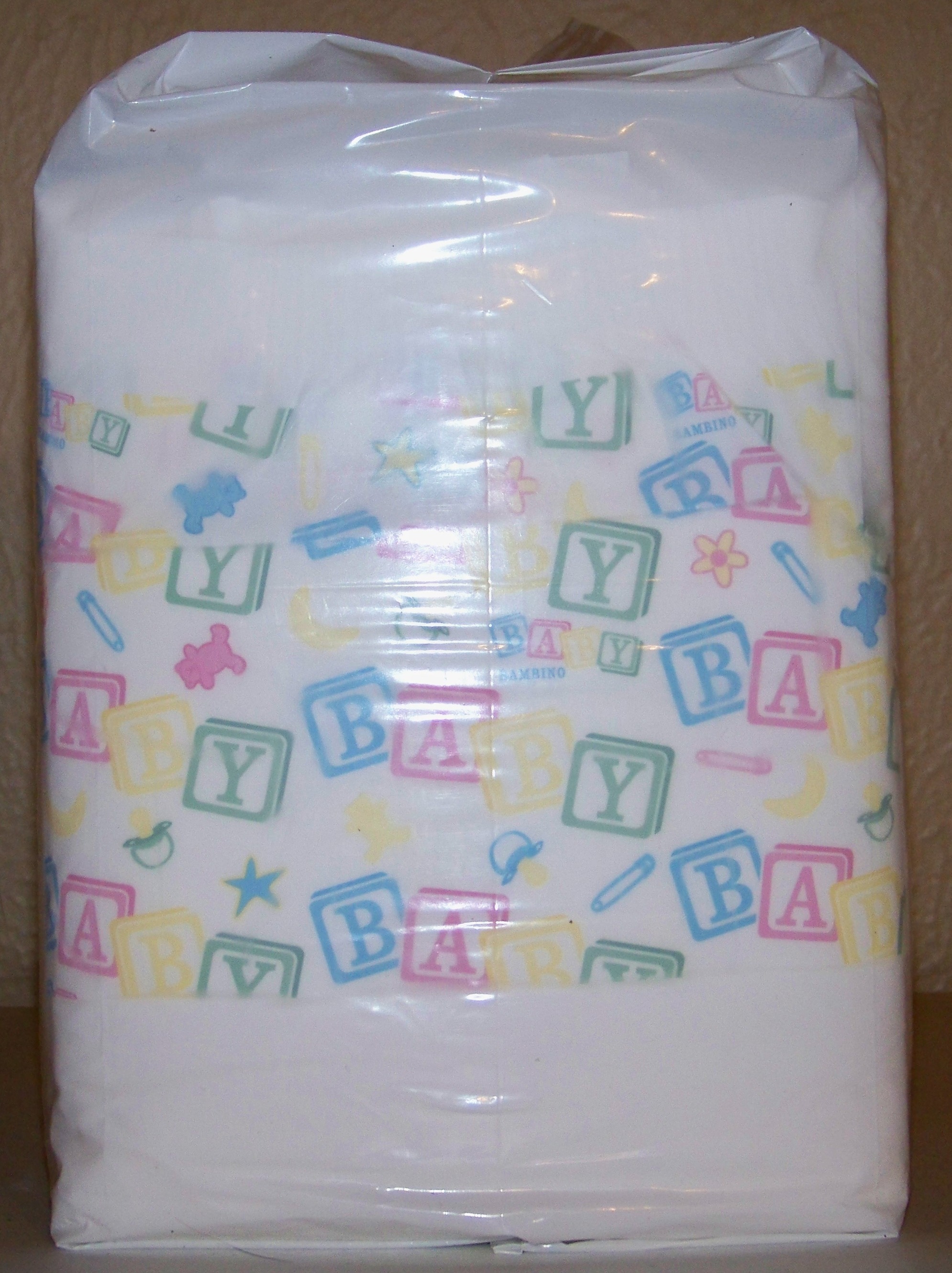 The Bambino Classico has a printed front landing zone with a baby block pattern that repeatedly spells the word "BABY", and is otherwise solid white. The pattern is made of 4 pastel colors. I've found that depending on the version over the years, the flatness or brightness of the colors used in Bambino prints has varied quite a bit. In this version, the color is very bright. 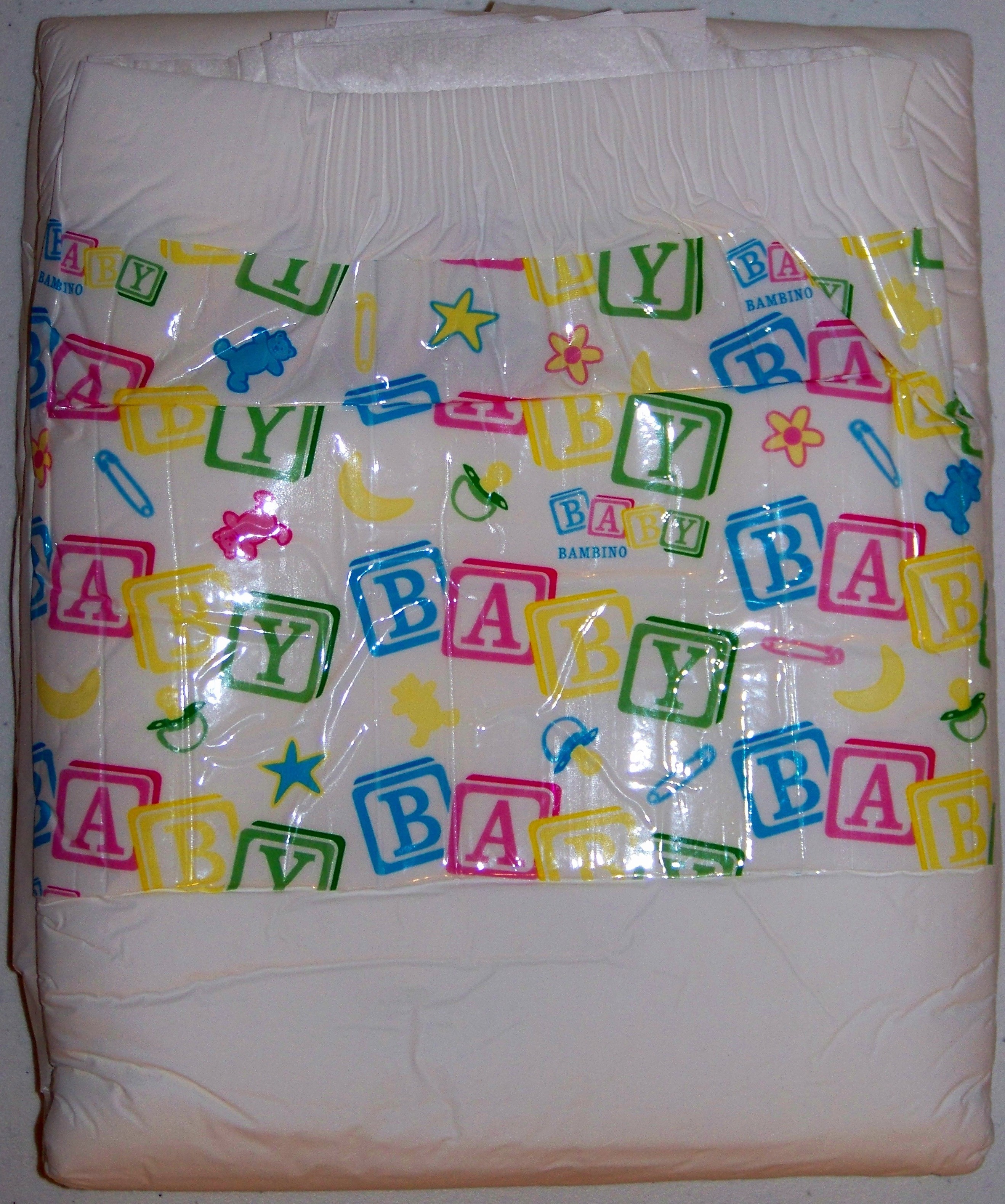 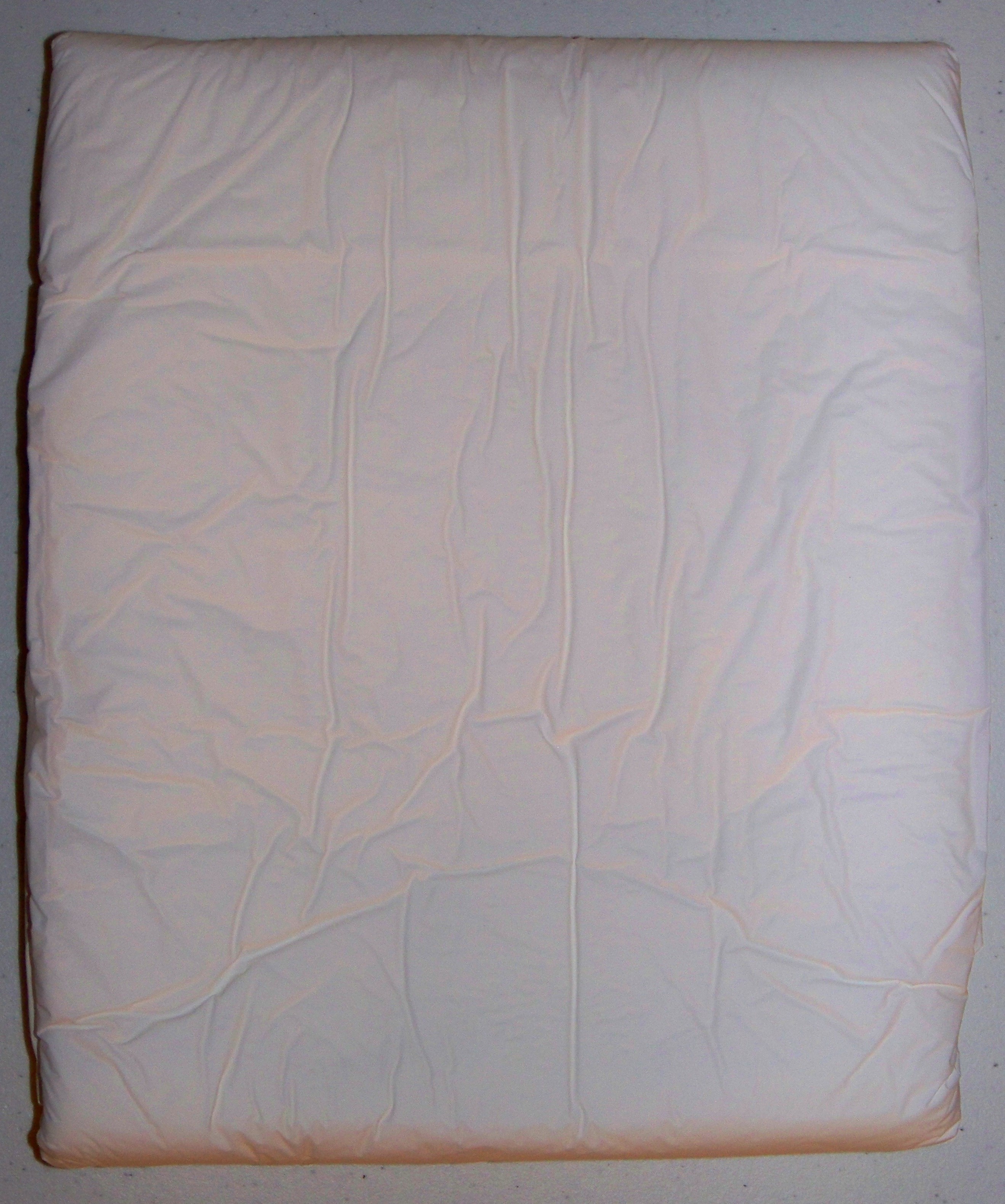 
The Classico is the essentially the same diaper as the Bambino Bianco and Teddy, but with a different print. The Bianco is an all-white version with no print, and the Teddy has a repeated Teddy Bear print.


To test their dry thickness, I stacked three diapers on top of each other and placed a heavy book on top of them, and measured their height. Together, the 3 diapers had a height of approximately 9.4 cm (3.7 in). Thus, the dry thickness of a single folded diaper is 3.1 cm (1.2 in). This is consistent with claims of a slight decrease in the thickness from the previous version.


The Bambino Classico uses the conventional double tape design seen on most adult diapers. The tapes have a blue tip without adhesive to pull on. Bambino advertises their tapes as being refastenable; in the past, I haven’t had good luck getting them to refasten, though they did seem to stick quite well during my tests of this version. The tapes measure 4.0 cm (1.5 in). 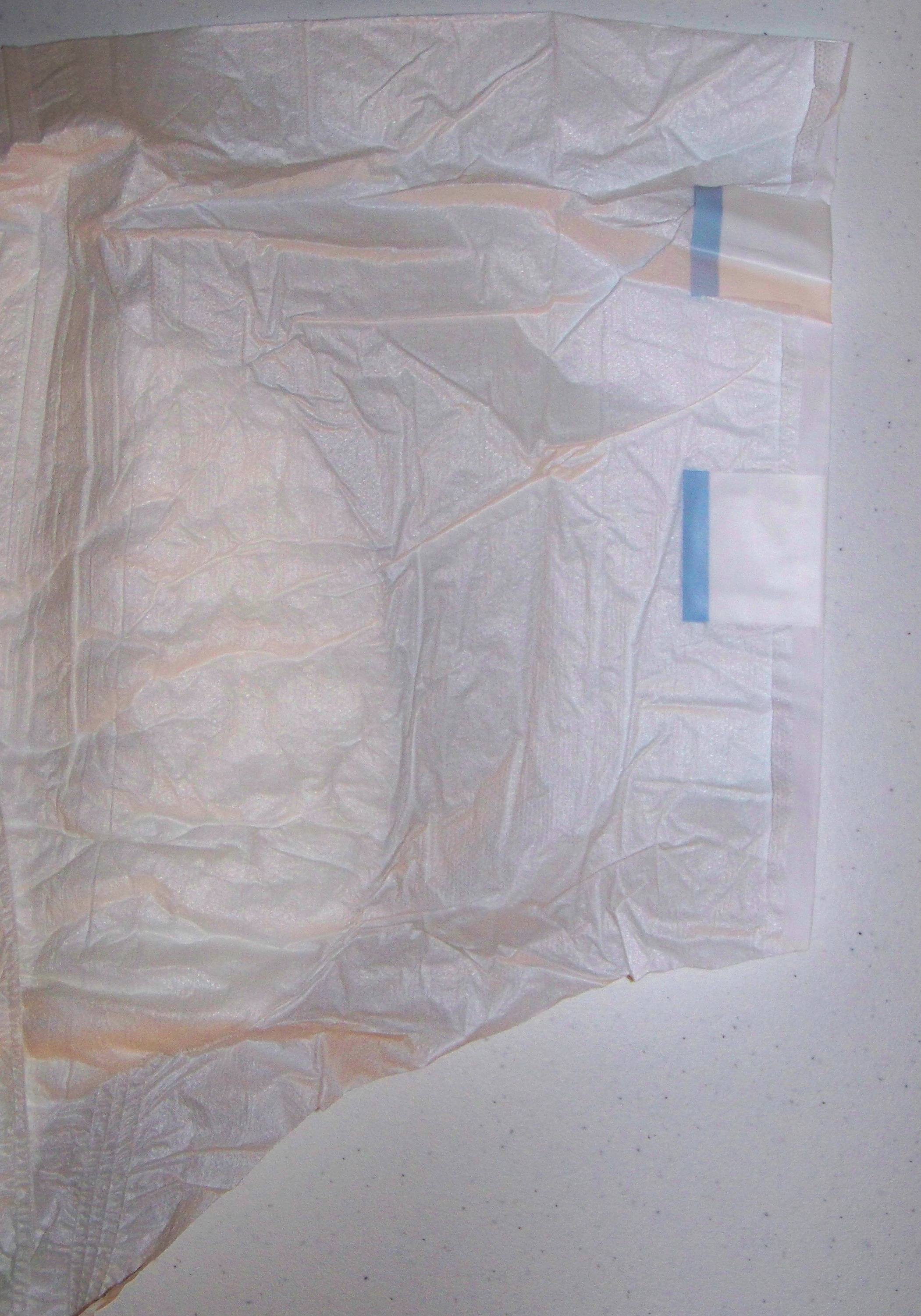 
The plastic backing seems thick and rigid. It feels very smooth with an oily-like texture. It crinkles a bit, but is not notably crinkly.

The inside of the diaper is all white, and the padding is arranged in an hourglass shape that is wider in the back than the front. The padding is soft, somewhat fluffy and not particularly dense. The diaper has standing leak guards and an elastic waistband in the front and back. 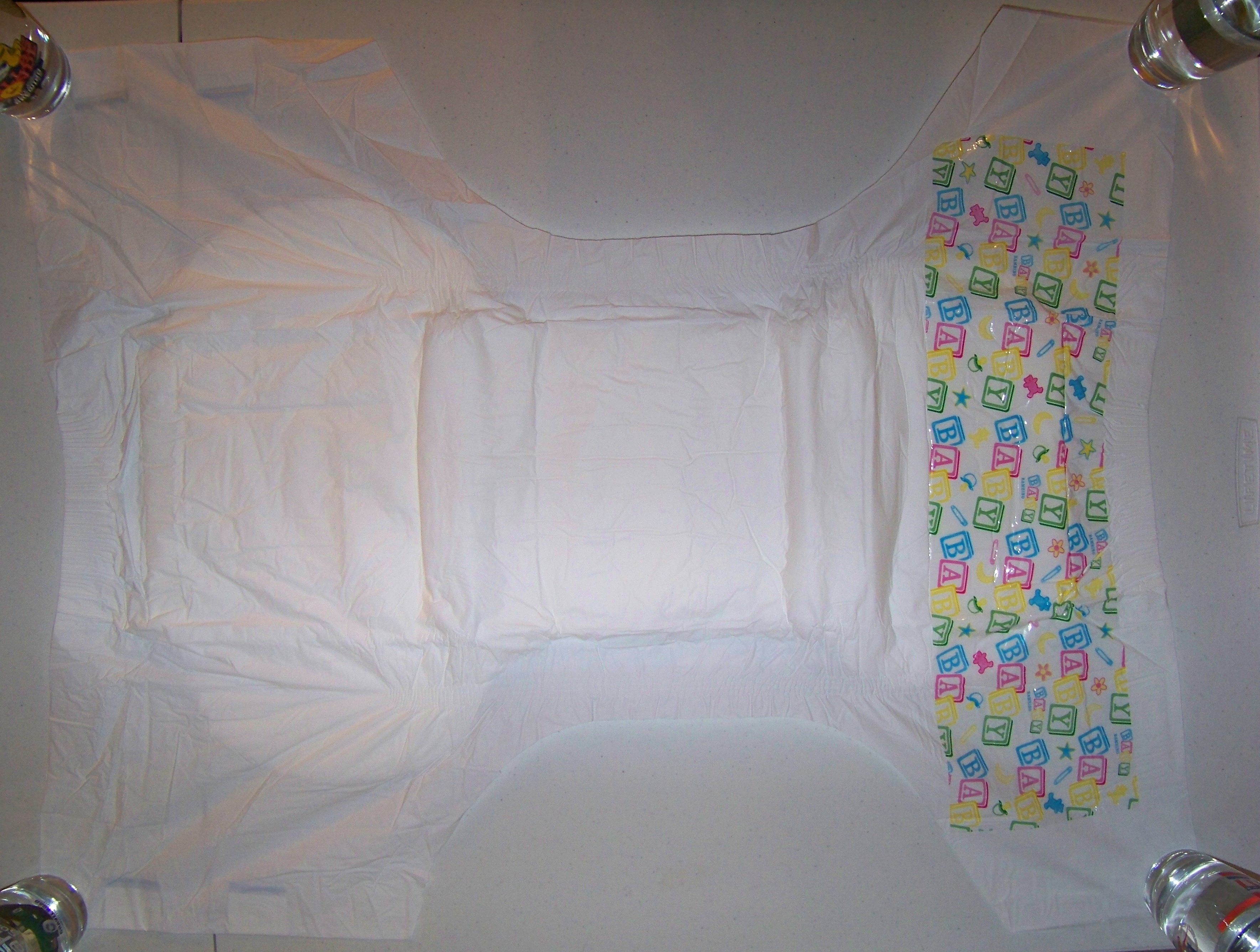 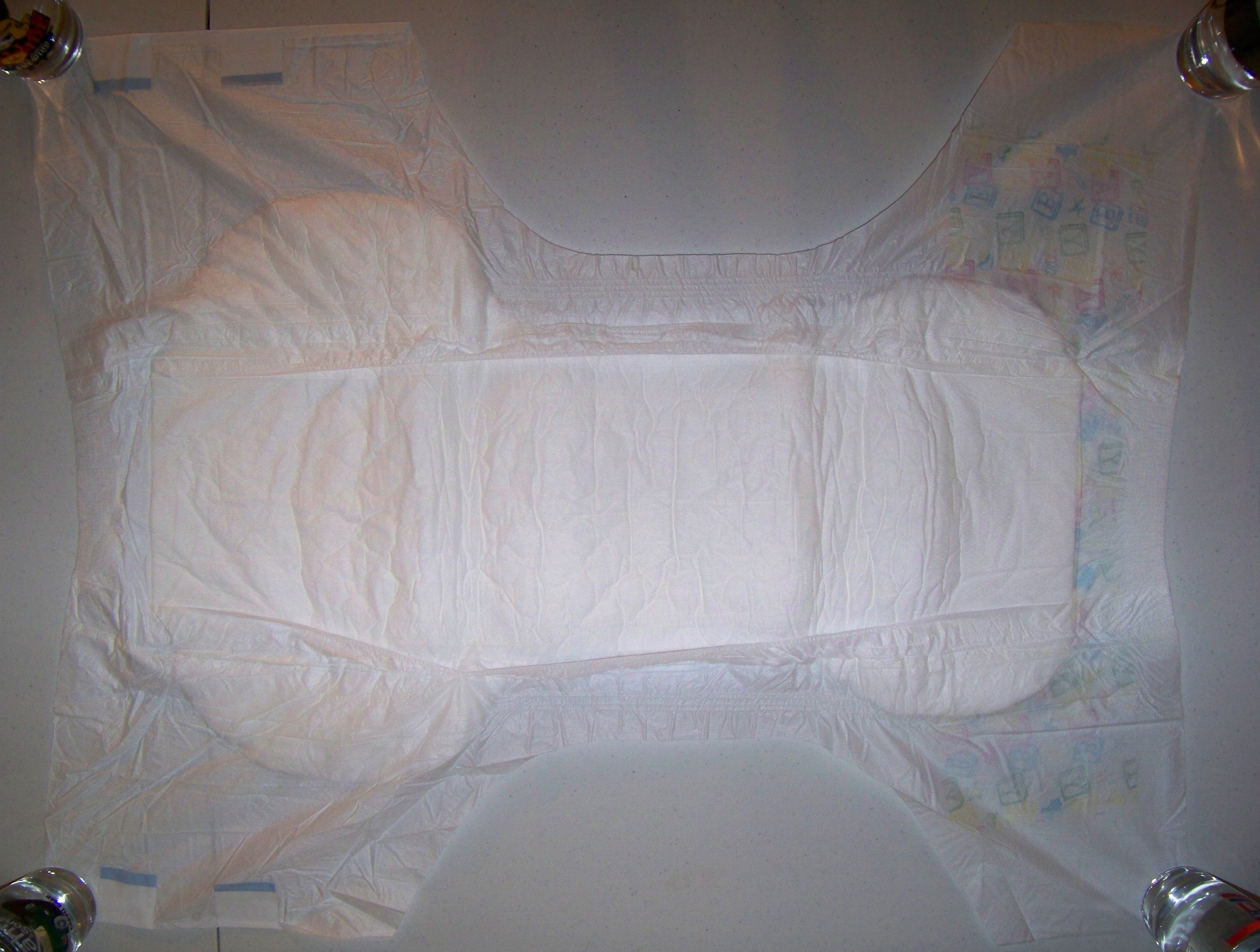 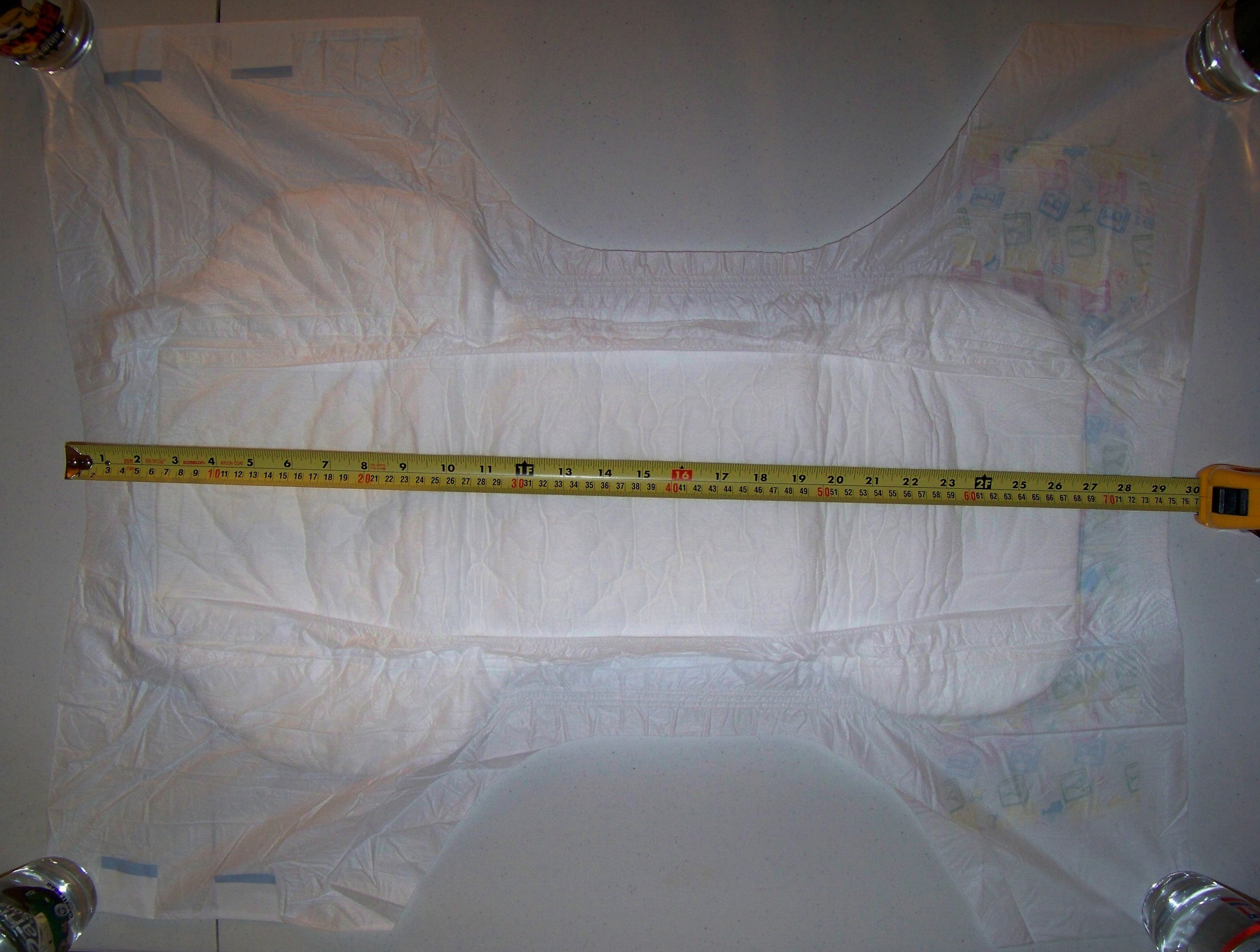 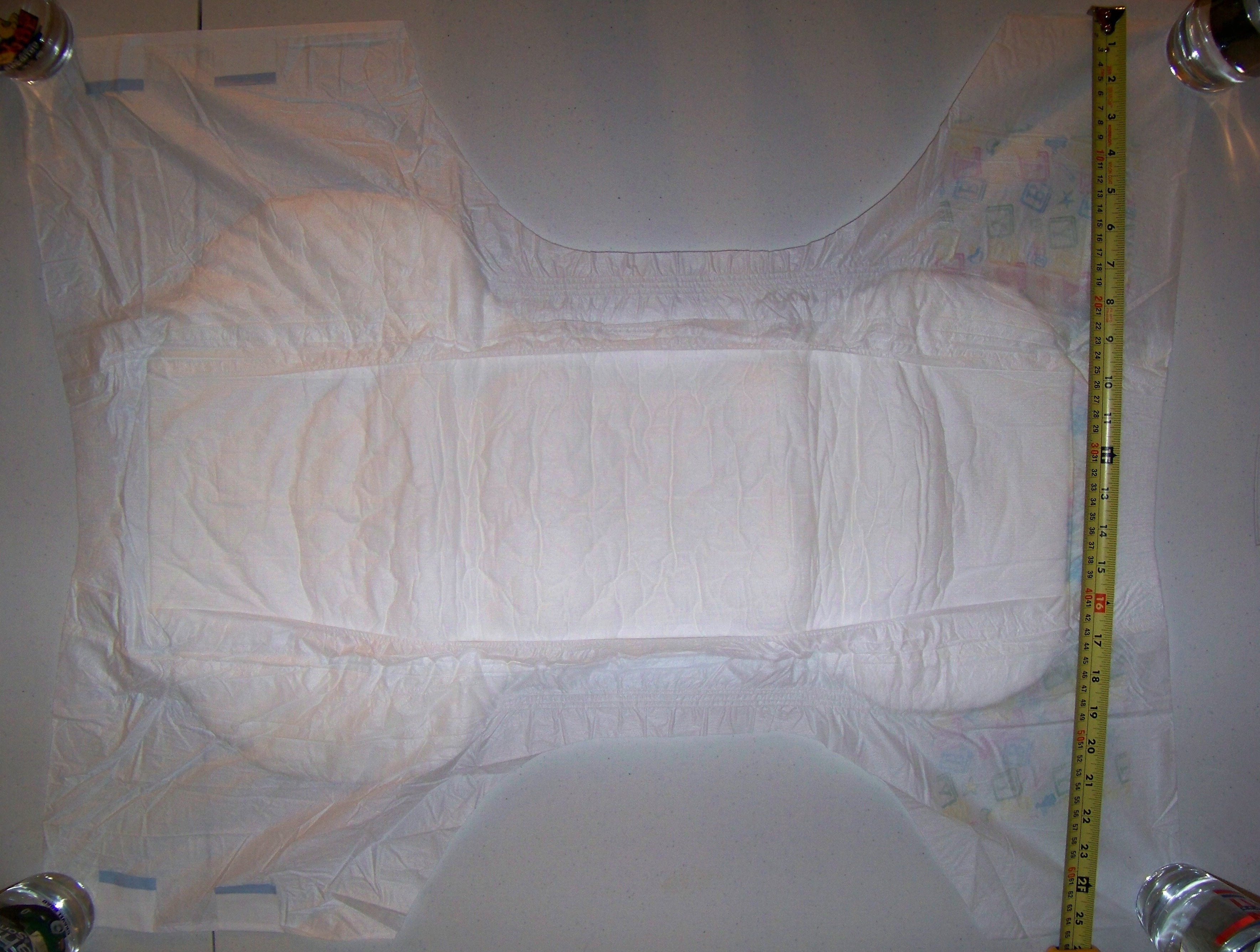 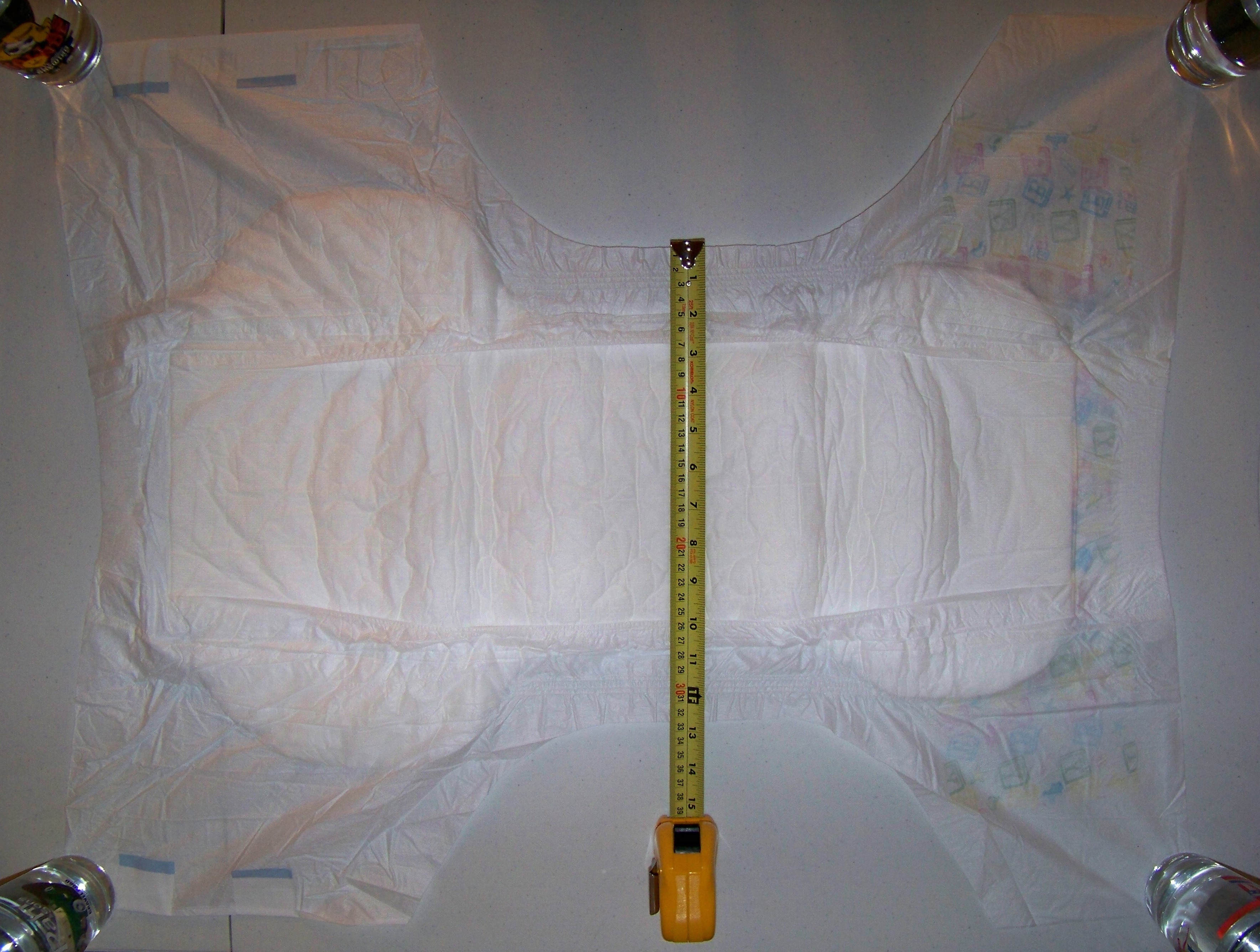 
To test the capacity of this diaper quantitatively, I ran a test to simulate use. I put a diaper on and then repeatedly poured water into the front of it in 100 mL increments and sitting down in a chair for 30 seconds each time to give the diaper a chance to absorb the liquid, pace the process, and see if it would leak when sitting. After 400 mL of water, I was noticing water running far down into the diaper as I poured increments. At 600 mL, I noticed wetness around the leg cuffs. At 800 mL, I felt like water was sitting at the leg cuffs. At 900 mL, the front of the diaper felt continuously wet. At 1000 mL, it took effort to close my legs. At 1100 mL I felt like I was sitting in a puddle. At 1200 mL of water, the diaper began to leak on my chair, and I ended the test.

This is a significant drop in capacity from the previous version of the Classico/Teddy/Bianco. The diaper weighs less, doesn’t feel all that dense, and in practice no longer seems to have the capacity of a typical “premium diaper”.

After the test, I measured it and it had expanded to roughly 7.4 cm (2.9 in), about 2.3x its original size. This is noticeably less than the previous version.


To gather qualitative data for this review, I put on a fresh diaper and wore it while going about ordinary activities. The diaper lasted a total of 3 hours, during which time I had several large wettings and some minor wettings, but did not flood it.

I have a 36" waist which puts me squarely within the size range for the medium, and there is no question that this is the right size for me. Whereas I’ve noted in past reviews that Bambino diapers have always fit a bit shorter on me than other brands, these versions measured 5 cm longer and sure enough, they seemed to fit more typically as compared to other brands.

The tapes stuck well. I’ve had difficulties with Bambino tapes over the years, but have not had any issues with them on the current versions of the Classico/Teddy/Bianco and Bellissimo.

This price is in line with high-end, "premium" adult diapers and lower capacity ABDL diapers. The Bambino Classico for its entire existence, really, had been a benchmark diaper, offering “premium” capacity with an ABDL print at one of the lowest price points among ABDL diapers, but this is no longer true. This version of the Classico doesn’t stand up to “premium” adult diapers in capacity.

The Bambino Classico/Teddy/Bianco now ranks among the lower capacity offerings by ABDL vendors, and in this category, it’s a pretty typical offering. Increasingly, the older Bambino designs seems to be diapers content to replicate an older era of 80s to mid-90s baby diapers while newer diapers have more elements in their prints from designs in the past decade or two. If print is what matters to you, and this is your era of preference, then the current version of regular Bambino products still have something to offer you.

Bambino’s older products have nonetheless been pared back in quality with this update, and are no longer one of the best values to be had. In a decade, they’ve inspired a great many competitors, some of whom now offer better deals. If the Bambino Classico/Teddy/Bianco has been your go-to diaper for much of the past decade, I think this downgrade is a good moment to go and try some of the other options on the market.
Last edited: Dec 4, 2016

I had a lower tape come completely off the diaper. The other 3 tapes held just fine.

I am bumping this thread to reflect the fact that I've re-reviewed the diaper in light of the changes that occurred when the Magnifico was released in Nov. 2016. The text of the first post has been replaced with the updated review.
Share:
Twitter Reddit Pinterest Tumblr WhatsApp Email Share Link
Top