The AwwSoCute Purple Teddy Bears is one of the three available colors for AwwSoCute's diapers, which all feature the same all-over teddy bear print in blue, pink, or purple. AwwSoCute which launched this diaper in 2013 does not appear to have made any major changes to it since launch beyond the available colors and naming scheme, nor have they released other diapers, opting to instead to release a wide variety of ABDL clothing, pacifiers, and other items at lower-end price points. 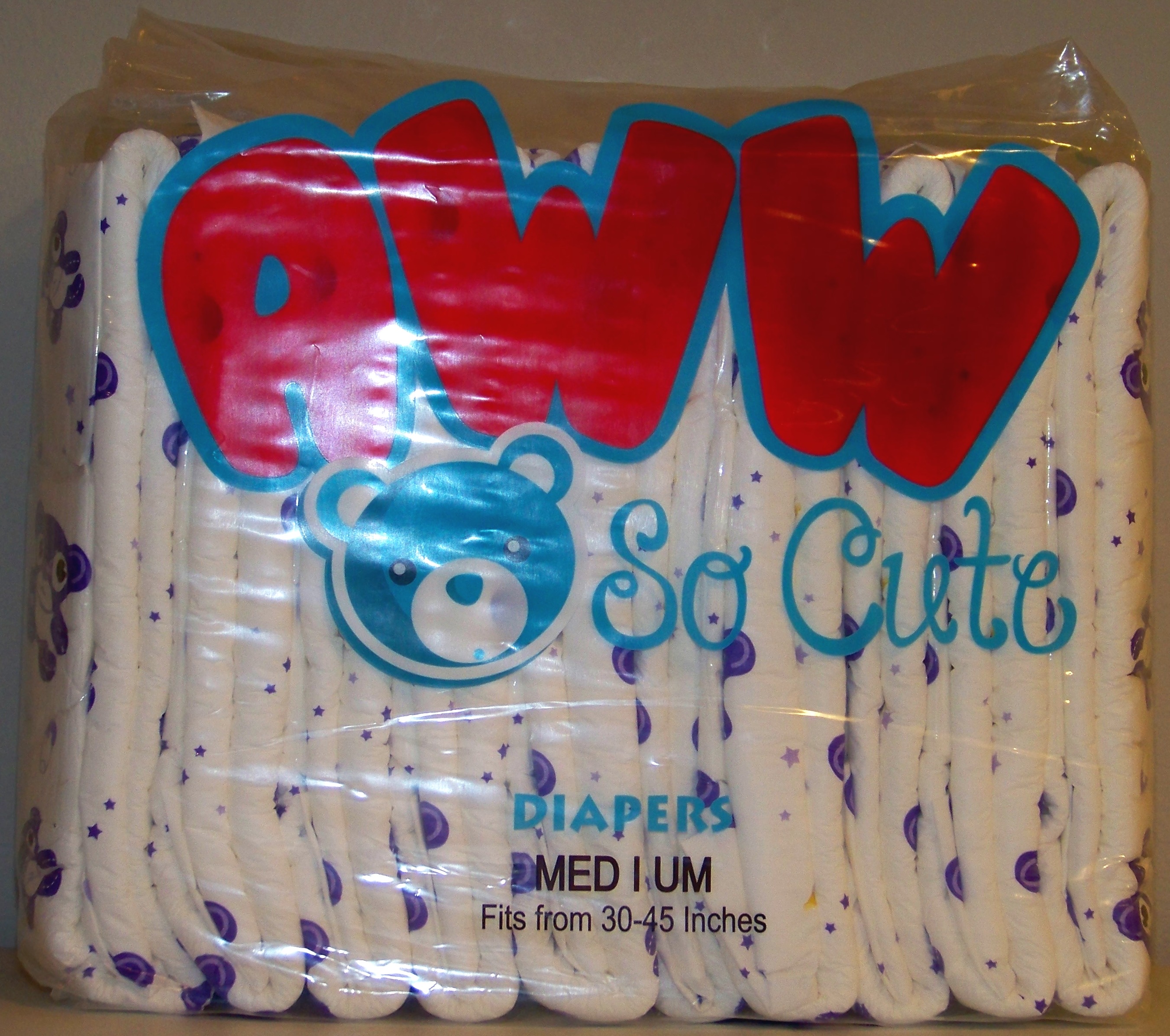 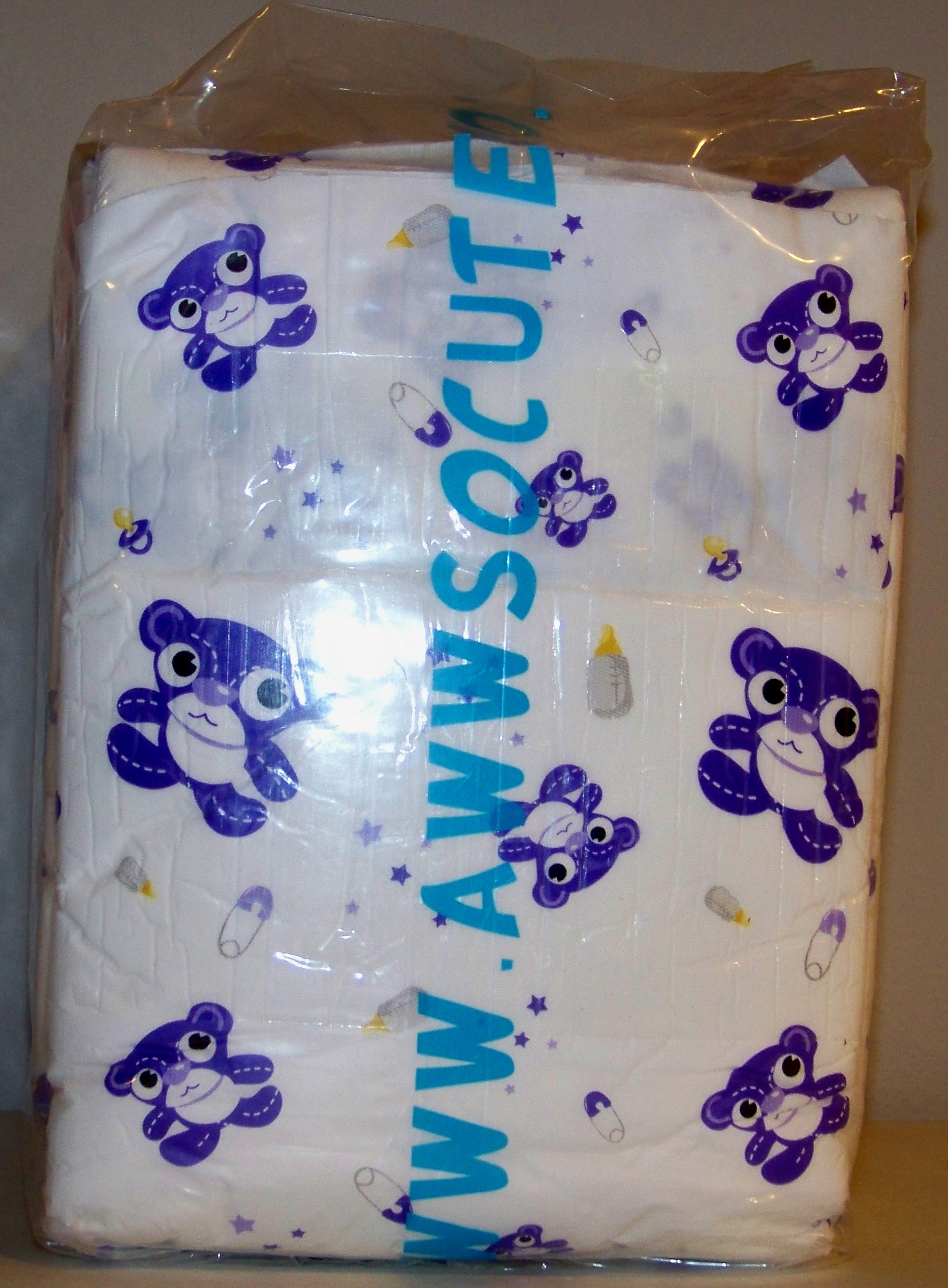 The Purple Teddy Bears has an all-over print featuring the eponymous bear in various sizes most prominently along with other baby items and stars in a repeating pattern. The landing zone is a clear transparent across the top of the diaper.

The outer plastic has a slick and oily feel to it. 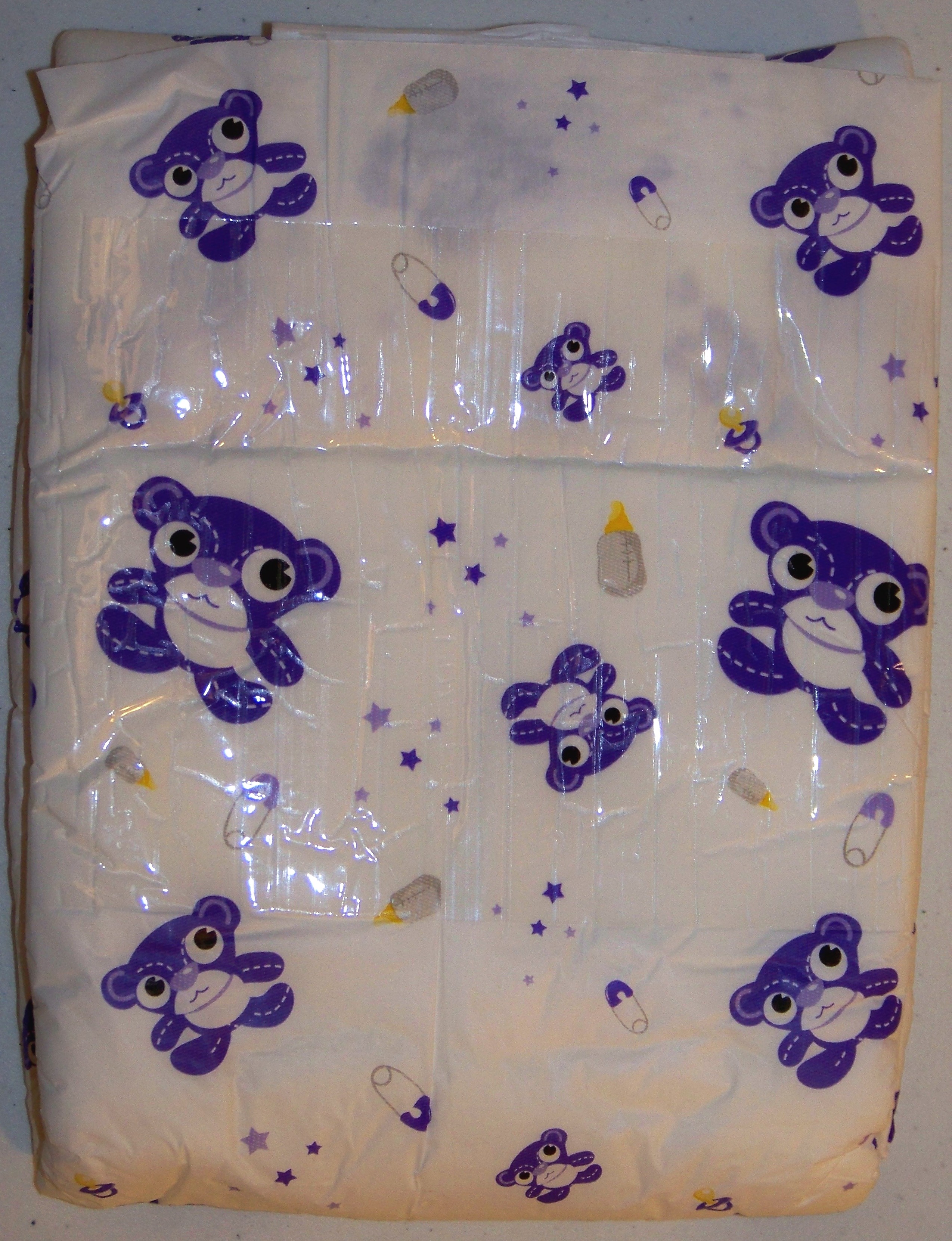 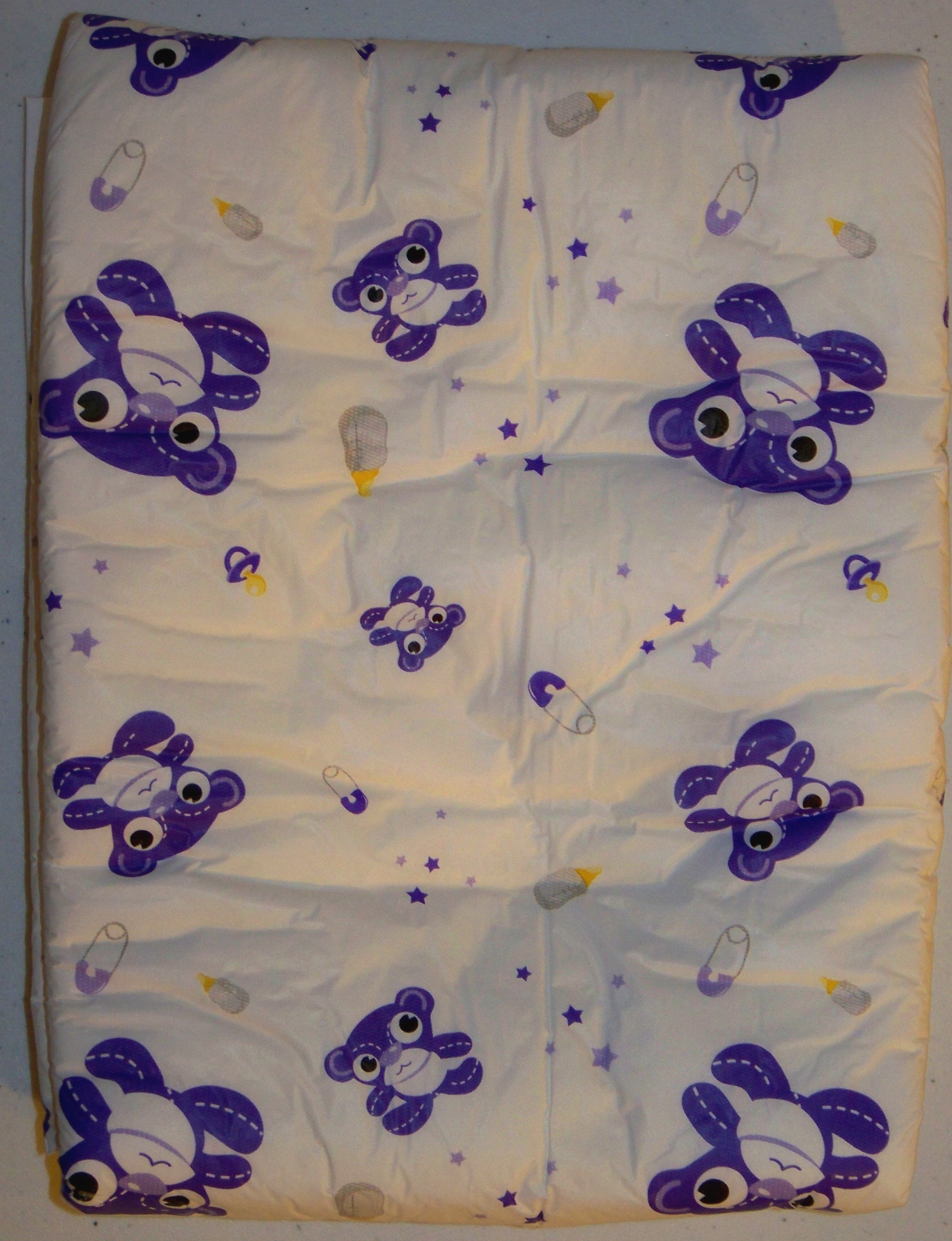 
To test their dry thickness, I stacked three diapers on top of each other, placed a heavy book on top of them, and measured their height. Together, the 3 diapers had a height of approximately 9.7 cm (3.8 in). Thus, the dry thickness of a single folded diaper is 3.2 cm (1.3 in).

The AwwSoCute Purple Teddy Bears uses a double-tape design with tapes that measure 3.9 cm (1.5 in) wide each. 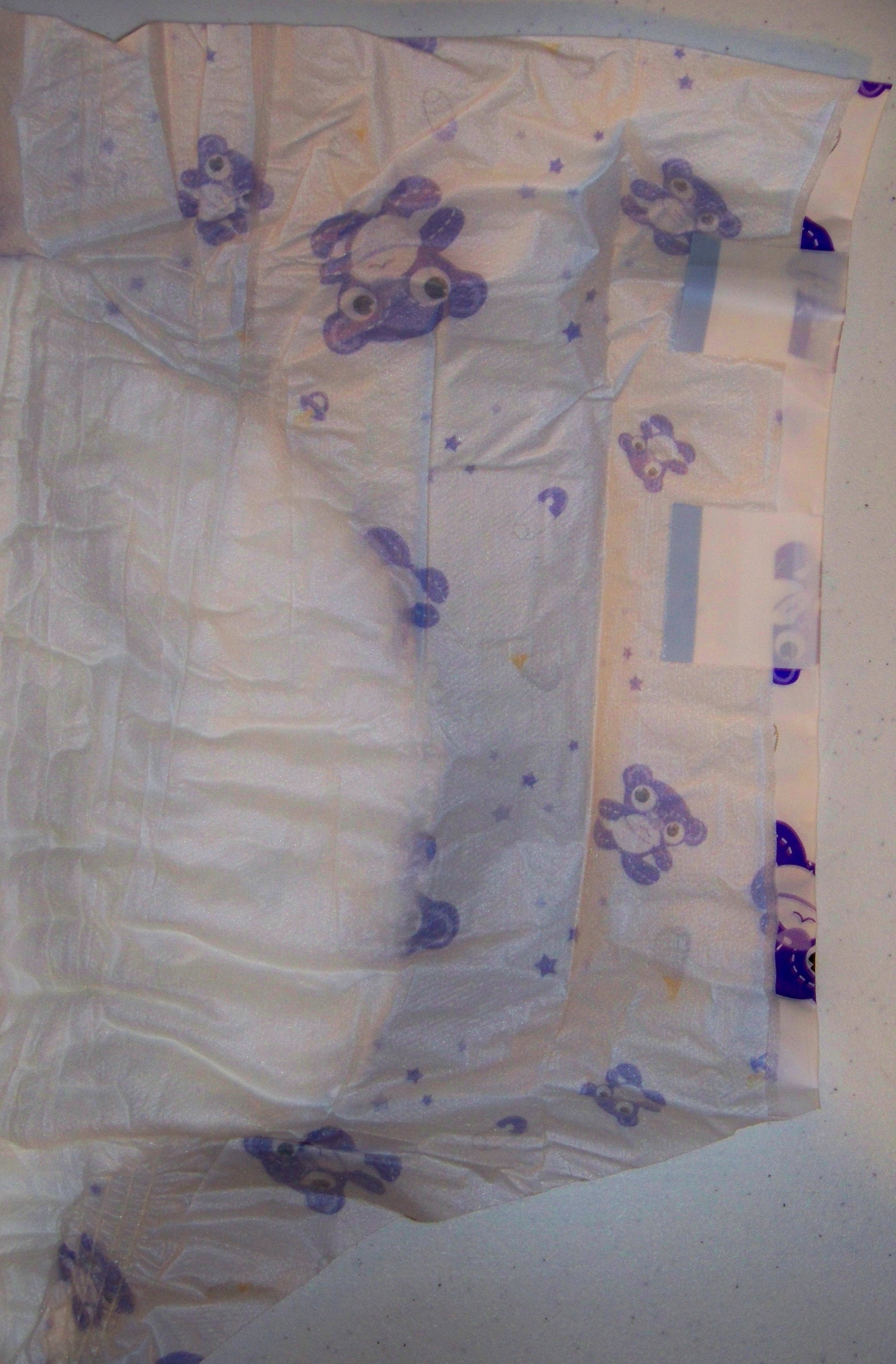 
The inside of the diaper is all white and the padding is arranged in an hourglass shape. The padding feels soft and cottony. The diaper has standing leak guards, but does not have elastic waistbands on either side. 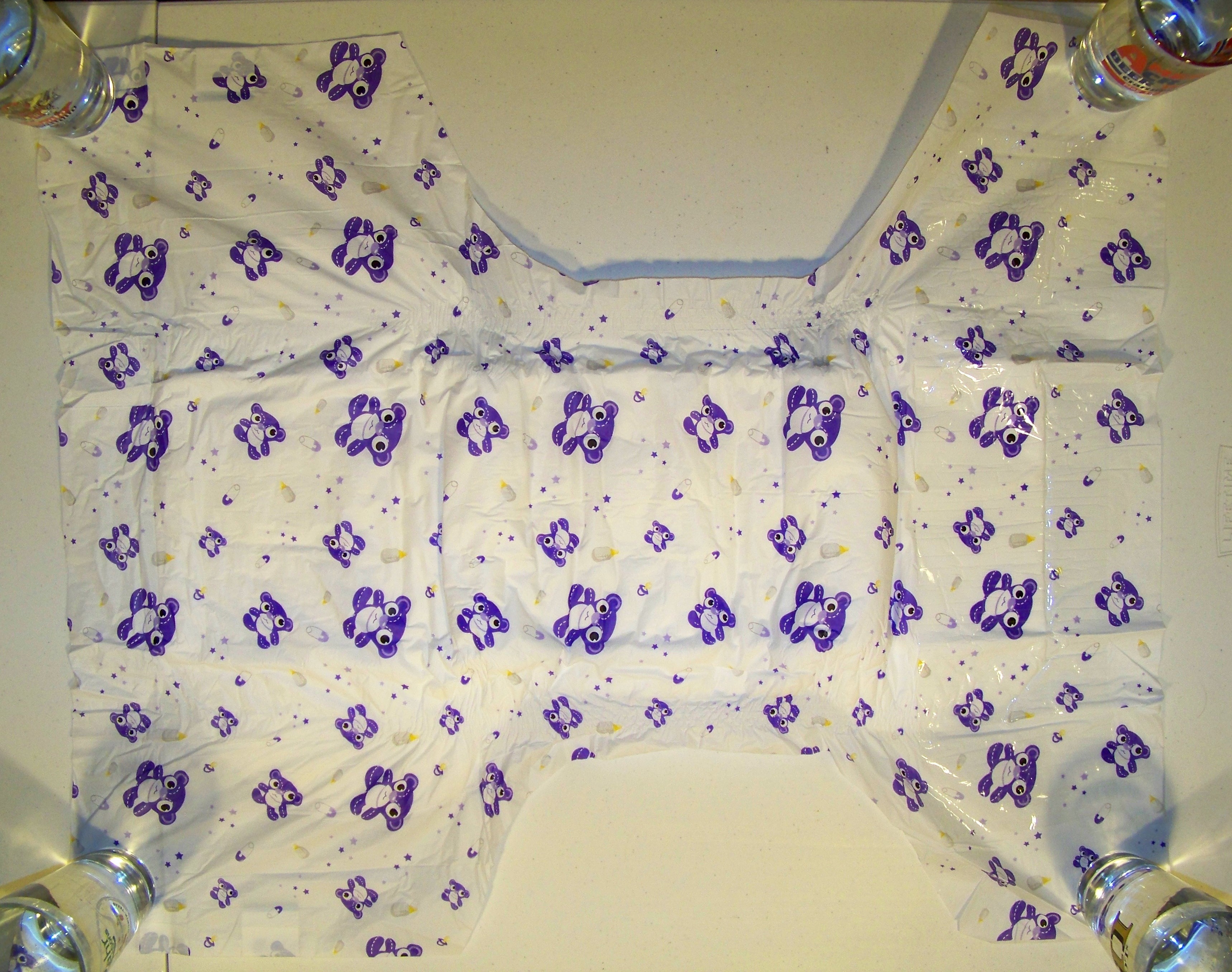 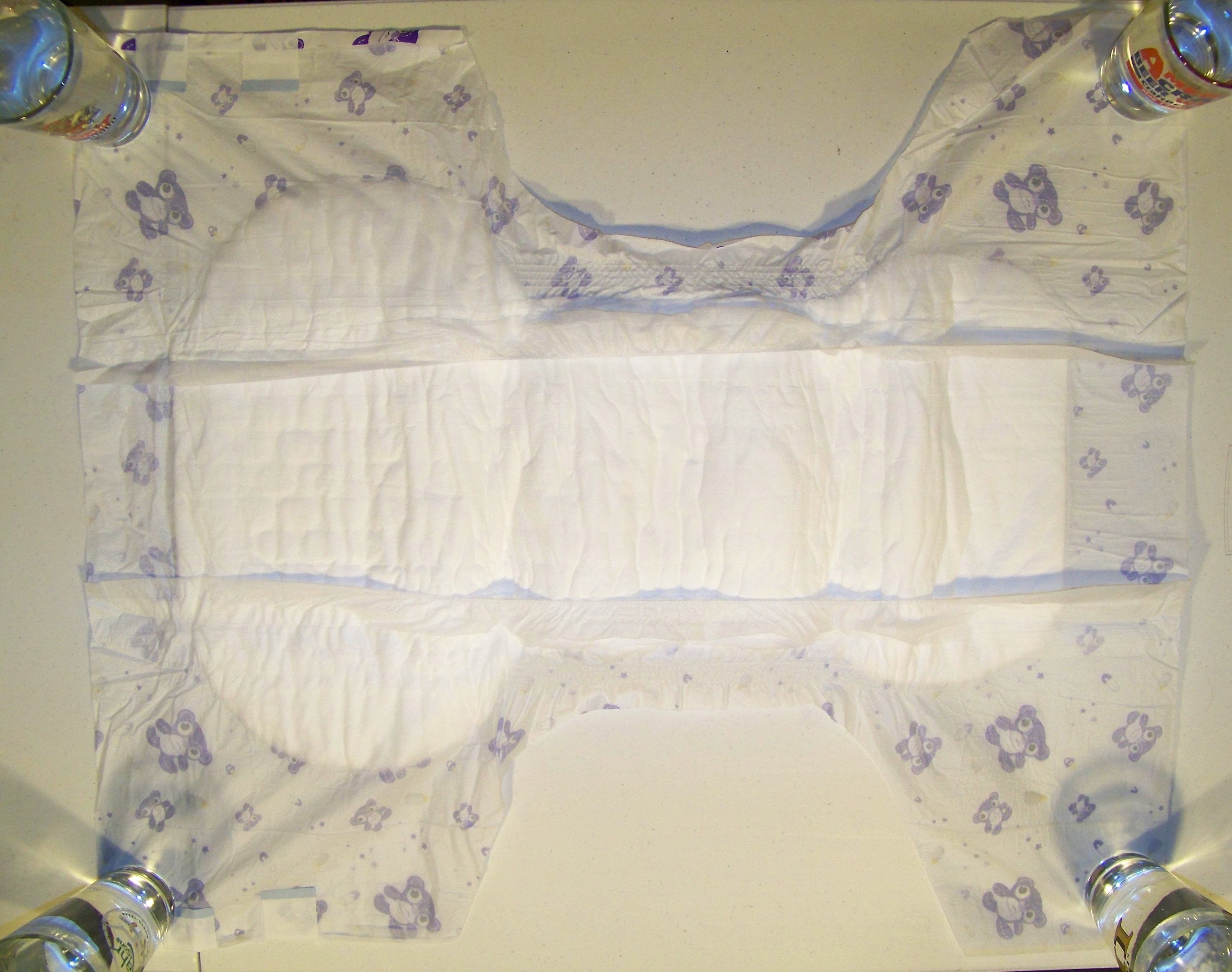 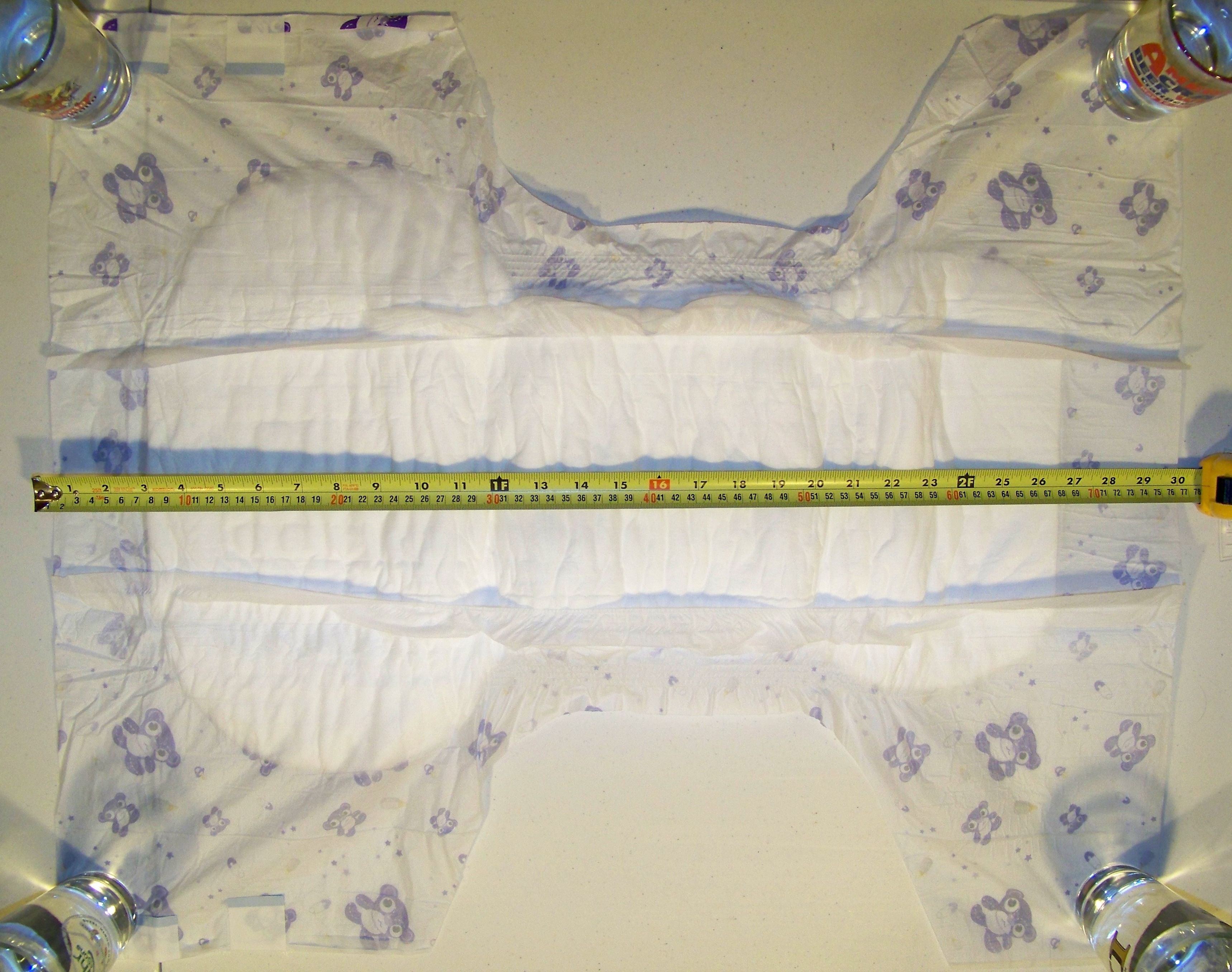 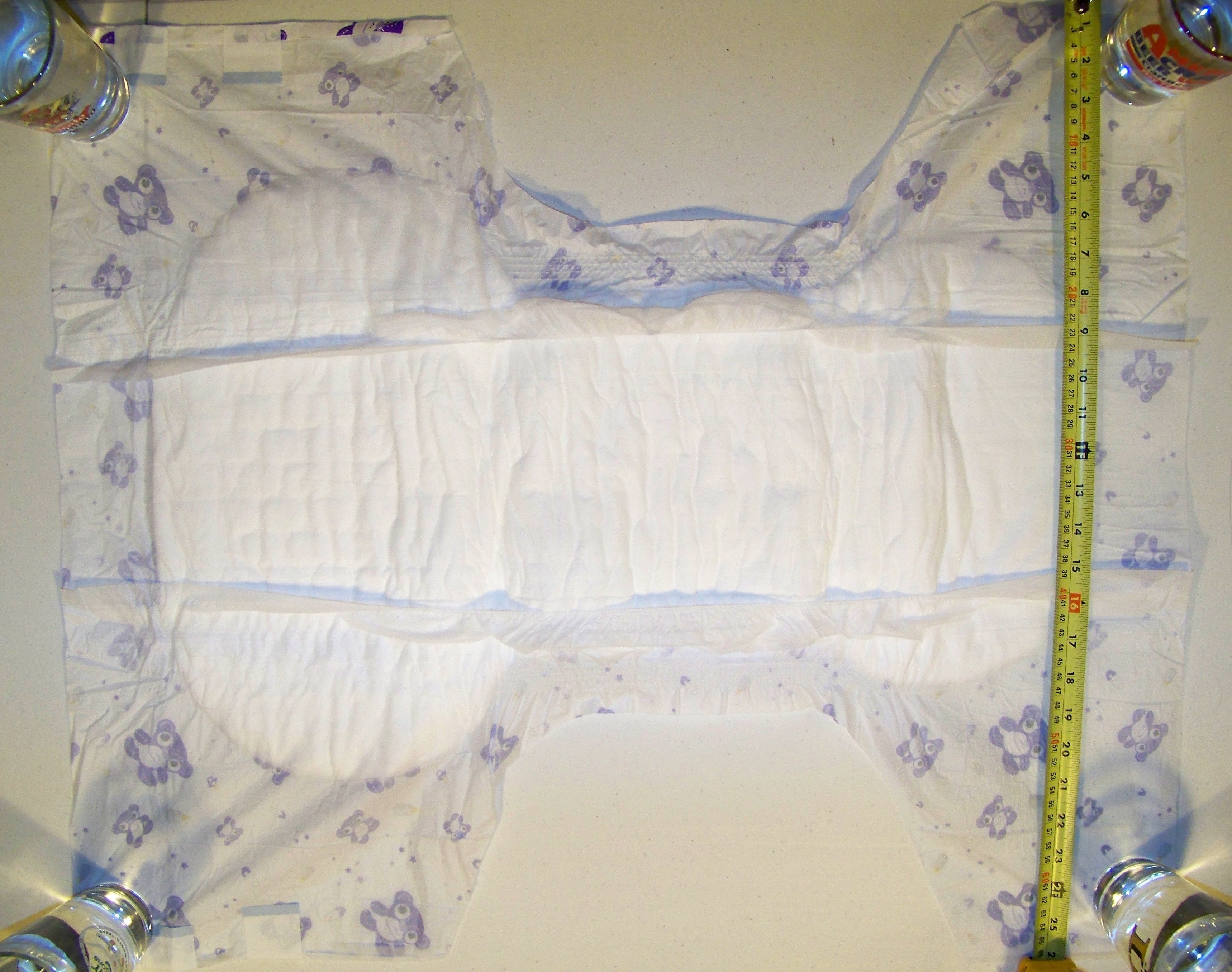 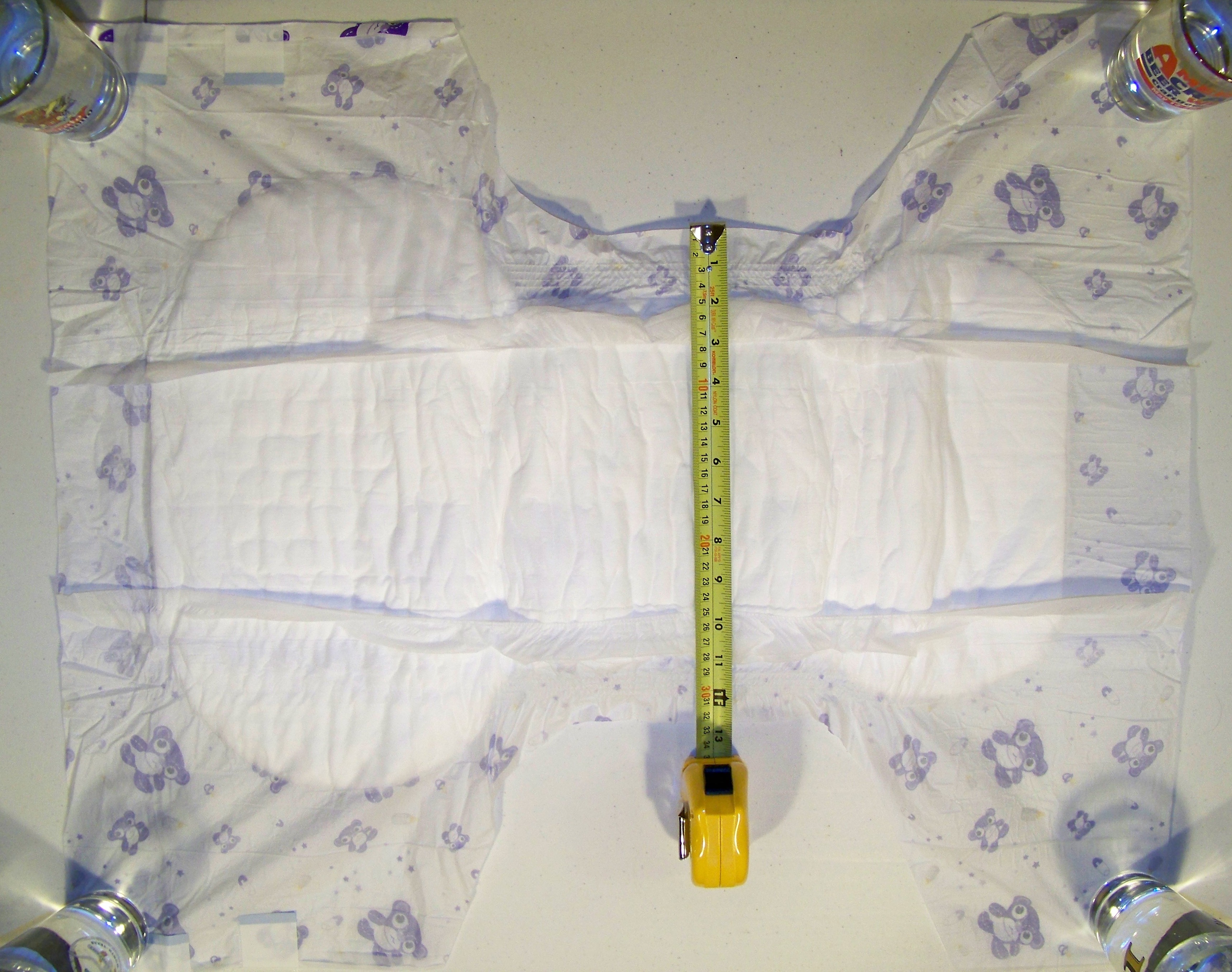 Over 3 replicates of this H2O capacity test, the AwwSoCute Purple Teddy Bears averaged 1369 mL with a standard deviation of 252 mL.

During one trial of this test, I recorded qualitative information about the diaper as I added water to it. After 600 mL of water, the front of the diaper felt continuously wet. At 800 mL, I felt liquid running down by my legs. At 1000 mL I felt like I was sitting in a puddle. At 1100 mL, the diaper leaked.

I folded the diaper back up to compare its thickness to a dry diaper. It had expanded to roughly 7.5 cm (3.0 in), about 2.3x its original size. The tapes did not move at all throughout this test.

The average dry mass of this diaper, based on 6 replicates across both tests, was 160.5 g with a standard deviation of 2.8 g.

I weighed and put on a fresh diaper and wore it while going about ordinary activities. The diaper lasted a total of 4.5 hours before massively leaking during a flood. During my test, I had 2 wettings and 2 floods, and measured a change of 997 g, equivalent to 6.2 "half-floods" which was above my testing results which likely explains why I was dripping liquid everywhere as I tried to get it off after a flood.

With a 36" waist, I am in the lower half of the listed size range for the medium AwwSoCute Purple Teddy Bears. I normally wear size medium in other diaper brands, and this diaper seemed to fit my size well.

I bought a pack of these diapers for the purposes of a review from a seller on Amazon as it was cheapest with shipping at the time to buy a single pack there. These diapers are available in packs and larger quantities from https://awwsocute.com/. All colors are priced the same and are available in 2-diaper samples, 10-diaper single packs, and 50-diaper cases, priced without shipping at $9.95, $19.95, and $89.95 respectively. When I add them to my cart and account for shipping, the prices rise to $16.90, $30.90, and $108.90 respectively.

At the case size, this works out to $2.18/diaper and based on my test results this diaper holds 1.7 "half-floods" per dollar. This price is middling at best on a per diaper basis compared to other ABDL diapers, ahead of several other companies' high-end offerings, but the diaper fared poorly in my quantitative testing, in line with "daytime" ABDL diaper products. This works out to a product that fares poorly in efficiency of price for capacity.

This is a diaper that has been on the market largely unchanged for nearly 5 years at the same time that the competition to build a better ABDL diaper has been fierce. While it's by no means a bad product nor any kind of outlier, it's a lackluster offering somewhere near the back of the pack, comparable in capacity/price to upstart offerings that don't sell at its scale, and lacks standard premium features like elastic waistbands.

If you like the print and aren't overly concerned about use, the per diaper price of the AwwSoCute Purple Teddy Bears is middling and it is still a functional if lighter capacity product. It feels though like there's been a missed or ignored opportunity to parlay the scale the AwwSoCute has achieved into offering more competitive products.
Last edited: Mar 1, 2018

one of my favorites...
they feel really really great soaking wet....
F

Also one of my favorite daytime diapers. Discreet and moderately absorbent.

I normally wear cloth diapers and rubber pants, but these cute diapers almost sway me toward disposables.

Thanks FruitKitty for your review.

The Aww So Cute purple diapers used to be my favorite diaper. That has changed. Unfortunately, I don't believe the company has really kept up with the competition. Often the diapers have been out of stock, and whereas I used to be able to order a case and get a discount for the bulk purchase, I cannot find this option any longer.

Also, I have had a couple of instances where the product itself has been substandard and quality control appears to have been lacking. Please see an earlier thread where I shared some experiences where the diapers I received were defective.

On more than one occasion the diapers I received were defective. One time where almost the entire case had diapers missing one of the tapes, and another where apparently something had gone wrong and there were gobs of adhesive on the diaper.

Having shared the poor experiences, I want to otherwise state that I really used to love these diapers. They are amazingly cute and very babyish.

Hopefully the company has corrected the manufacturing problems, but I for one have mostly moved on to other products. It seems that there continues to be improvements in adult diapers and new companies entering the market with even more modern technology and wonderful babyish prints.
Last edited: Aug 23, 2019
You must log in or register to reply here.
Share:
Twitter Reddit Pinterest Tumblr WhatsApp Email Link
Top