Aww So Cute is a fresh new face in the ABDL marketplace selling a variety of items from adult baby clothes to its own line of diapers. The company is owned and operated in the United States but also offers international shipping. Aww So Cute debuted its first diaper as an all-over-print, plastic-backed offering specifically for adult babies: the Nighttime Teddy Bears.

I reviewed the medium sized Nighttime Teddy Bears (NTB) bought as of May 2013 which came in a case of 10. This particular medium size fits 30-45" waists. Aww So Cute also offers large and extra-large sizes which fit 45-58" and 55-60" waists, respectively.


The Nighttime Teddy Bears has an all-over-print featuring adorable teddy bears and other AB items, including safety pins, stars, pacifiers, and bottles. The diaper is plastic-backed and has a nice crinkle, though a little softer than other AB-themed plastic backed diapers I've come across, such as Bambinos. 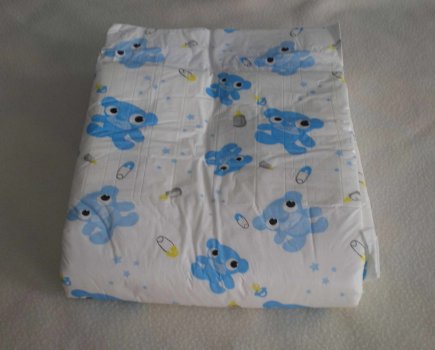 Front and Back of Diaper


The medium NTB sizing is on par with mediums of other brands I've seen. I compared sizing to some other popular brands to illustrate this point and are as follows: Bambino (Classico) and Depends (regular). 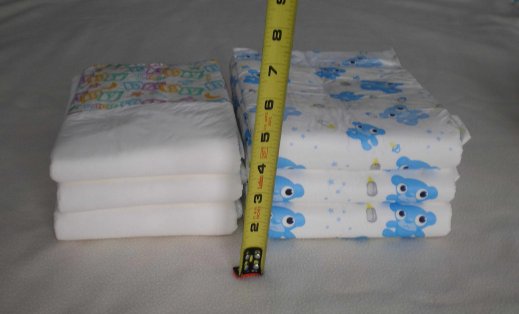 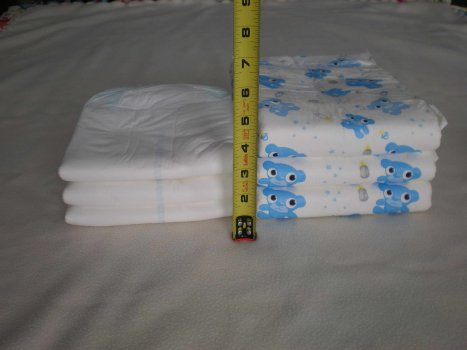 Thickness Comparison to Some Popular Brands


I also measured the thickness of the diapers themselves by compressing 3 of them with a heavy book. I found that the stack measured 3.6" (9.1 cm) high, meaning a single diaper is 1.3" (3.3 cm) in thickness. 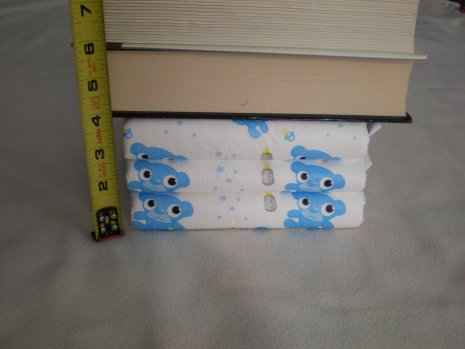 
The features are the typical found on most premium adult diapers from the tapes to the leg gather design. The landing zone is 5.5" top to bottom and runs the entire width of the front of the diaper. 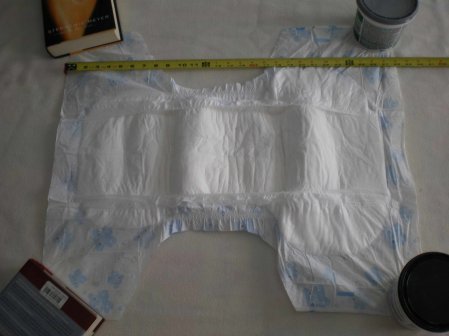 
There are 2" gathers employed from the front to the back at the 9" width. There is a leg-elastic through the middle and none on the top or bottom edges. 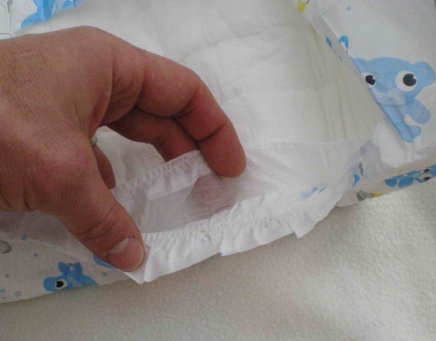 
The NTB employs a two-tape system. The tapes attach to a reinforced landing area that allows some repositioning and refastening. 
I compiled my measurements into a more refined blueprint:

All useful dimensions are found on the Sketch-up drawing below, with the padding shown in light-blue: 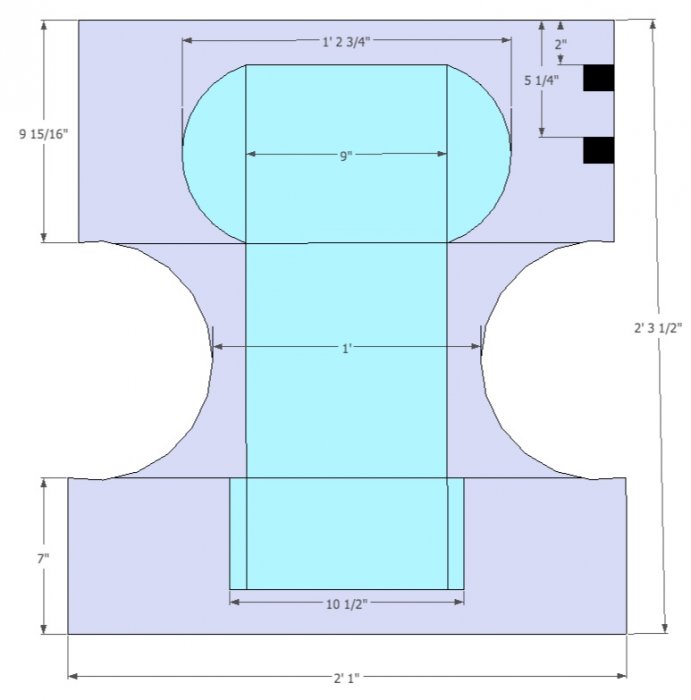 
I conducted a quantitative test to analyze the overall absorbency of the NTB. The test involved pouring water down the front of the diaper at 100 mL increments and then sitting in a chair for 30 seconds to check for leaks. I stood during all pour increments. At about the 700 mL increment, I noticed water beginning to gather at the back of the diaper. Later, I noticed a small leak on my chair around the 1.4 L increment but deemed it too small to end the test. Immediate leakage from the sides of the diaper resulted at the 1.6 L increment and I ended the test. I compared a wet and dry diaper together and it seemed the wet one tripled in size. Based on this test, the NTB diaper showed performance similar to that of other premium diapers.

To further test this particular diaper, I subjected it to a daily use test to see how it would perform during my daily activities. I was able to get in about three wettings total that would be best described as "flooding". I was also sitting during all three wettings. On the third, the fluid backed up and ran down the front side of the diaper into the no-pad zone. I deemed this the limit for actual use. When I removed the diaper it did seem there was potentially more capacity. Perhaps more testing would be in order for standing use.

I did also wear the NTB diaper for a night where I woke up incrementally to wet whilst lying on my back. I should note I did wet the diaper lightly before going to bed. I had about 2 moderate wettings in total sleeping. When I finally got up, there were no leaks and the bed was dry.

As far as fit and comfort is concerned, it's pretty decent. The diaper seems to go on as well as any other. My waist measures 34" so the medium has a pretty snug fit on me. Basically, it behaves like the other two-tape premium diapers I have worn in my experience. Not as comfortable as cloth, but nice enough to wear for several hours between changes. The tapes are very good, held without incident, and never even hinted at failure. Both the tapes themselves and their sticky adhesive were quite strong.

I did notice one difference with the NTB and other premium diapers, however. The overall length of the diaper is shorter than other popular brands I've tried. This means that the diaper does not rise up as high as the others. I found that this made concealment under clothes easier, and it seemed as though this would not hinder performance unless you are a belly sleeper.


These diapers are quite expensive. Aww So Cute sells them in packs of 10 for $25.00, which comes out to $2.50 per diaper. Compared to some other brands that cater to AB's, that price is pretty high. I myself can't really justify buying this diaper all the time, and I couldn't imagine other doing so unless they really want AB-themed ones. This is the 10 pack packaging the diapers come in: 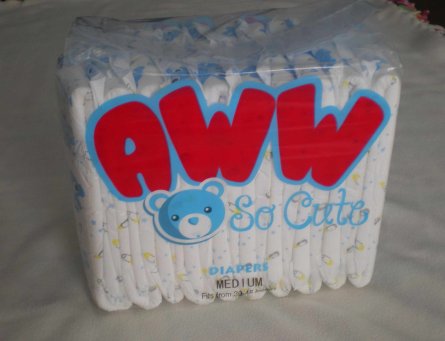 
I did certainly enjoy this particular diaper despite its cost. I really like the cute design and it being plastic-backed. I also liked was that I was able to go out in public without incident while wearing them since they are pretty discrete. So this diaper gets high marks in my book.

I purchased 20 of these diapers on a whim, but I will probably use them sparingly since they are so expensive. AB's looking for a good, functional playtime diaper will find this one's design quite attractive, and it would be a pretty good addition to their collection. Aww So Cute's first offering seems to me to be of a growing trend among ABDL companies to produce more all-over-print diapers. So overall, a great diaper for ABs and a good addition to the ABDL market, though a bit on the pricey side.
Last edited by a moderator: Feb 19, 2014

I won't mind wearing these and are they cute

pink teddy bears are so cute...lol

Advice please. Are these diapers discreet enough for daytime wear?

I wear them under street cloth all the time
Rearz used to have these on clearance by the case for under $1.5 delivered I ordered 2 cases - now down to 20 or so
Not extremely high volume but good volume and feel fantastic when soaked'