The ABUniverse BareBum was released in the middle of 2017 after ABU acquired BareBum. ABUniverse stated at the time that they were not making substantive changes to the diaper and wanted to keep it as a distinct and thinner product than their typical offerings.

The ABU BareBum has printed packaging similar to other ABU products with printed panels partially filling the front of on other otherwise transparent package. The panel has the BareBum diaper's baby block print motif and descriptive text; the packaging is not particularly remarkable. 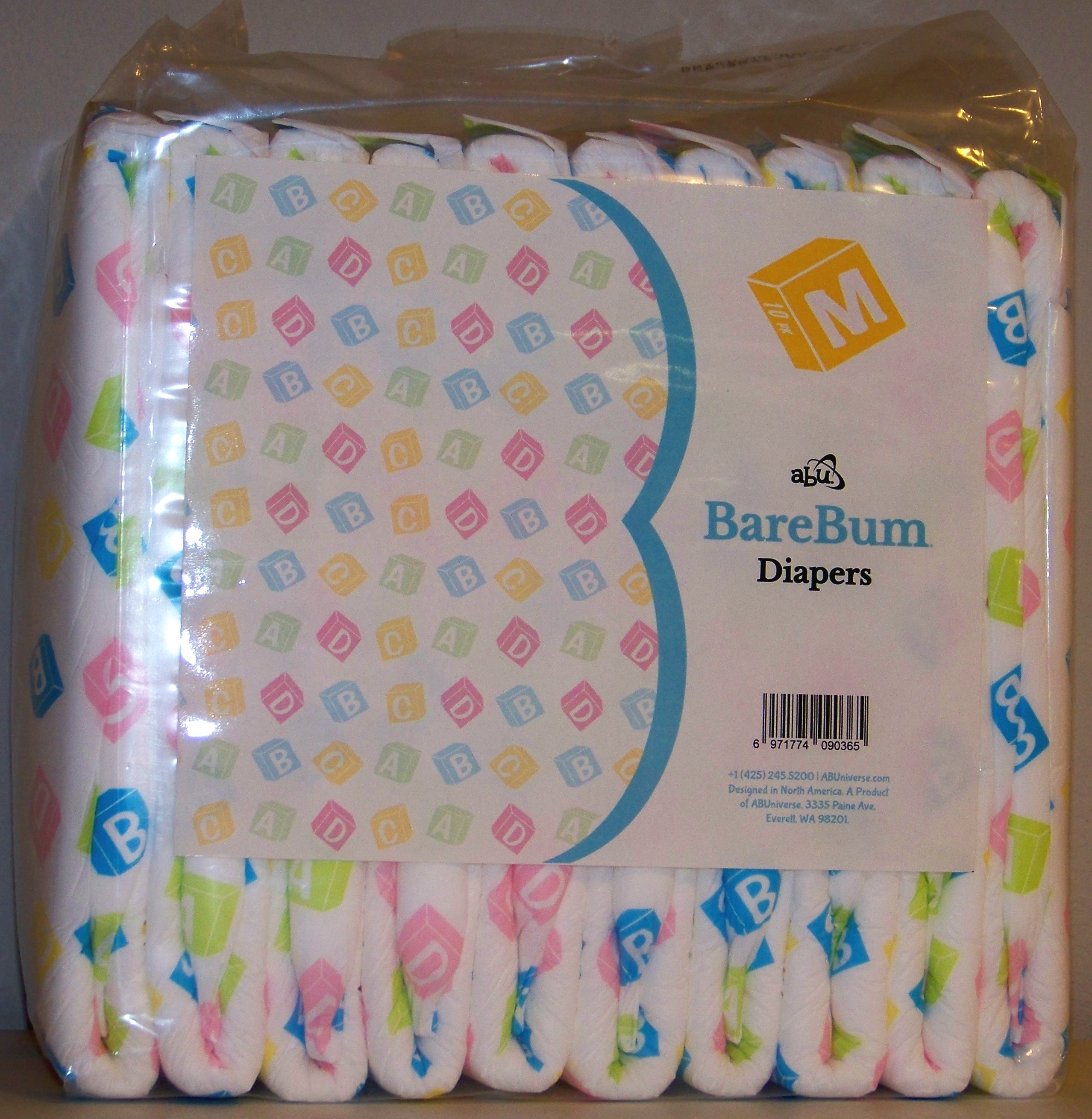 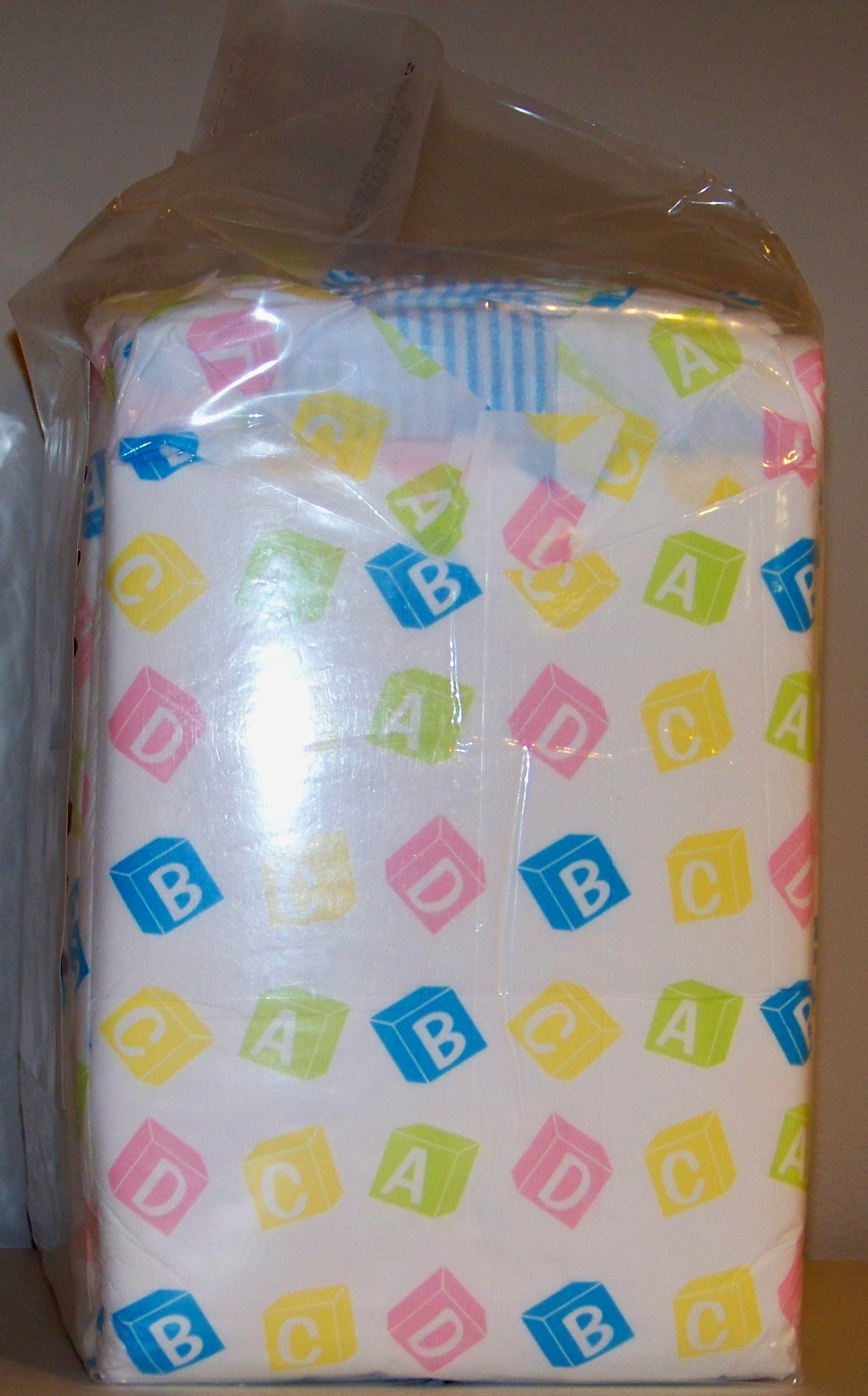 The ABU BareBum print appears to have no change from the original BareBum print. It is an all-over print with baby blocks printed with the first four letters of the alphabet in 4 different pastel colors on a white background. The sides have a vertical stripe pattern with blue stripes covering most of the wings and a narrower area of green stripes abutting the central pattern. The center pattern would, by itself, be a believably generically babyish motif that I could imagine on a generic baby diaper or even other patterned baby-related item, but the stripes turn this into a really busy high-contrast print that has never made much sense to me.

There are some clear differences between the old BareBum and the ABU BareBum, however, when you get past the print and start touching the diaper to feel the materials used. The plastic feels firm, smooth, and oily, whereas the original had a slightly rough feel. The landing zone is of obviously higher quality in that it feels like a thicker plastic and is firmly adhered whereas the original had issues with a very thin landing zone plastic that peeled at the edges. 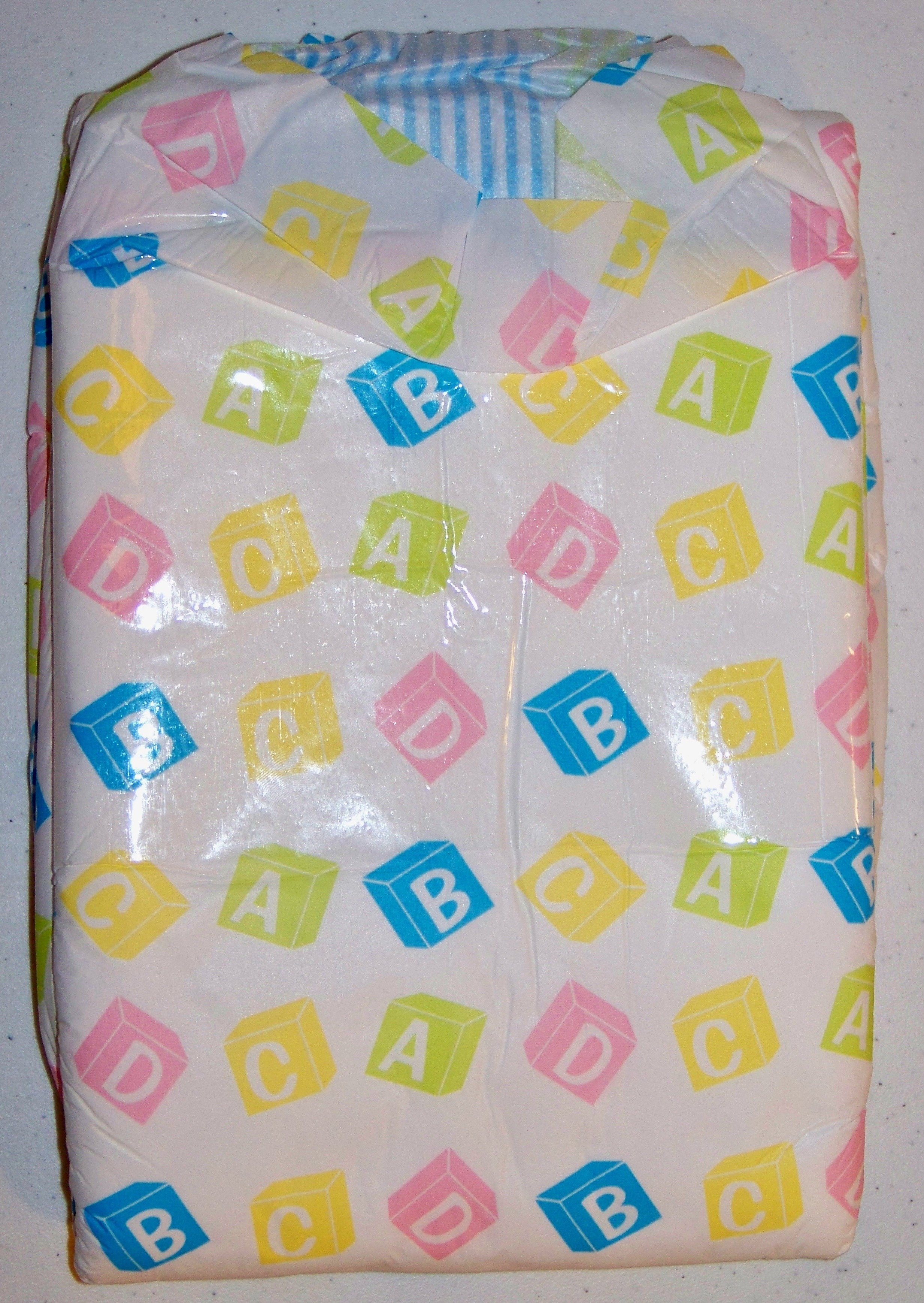 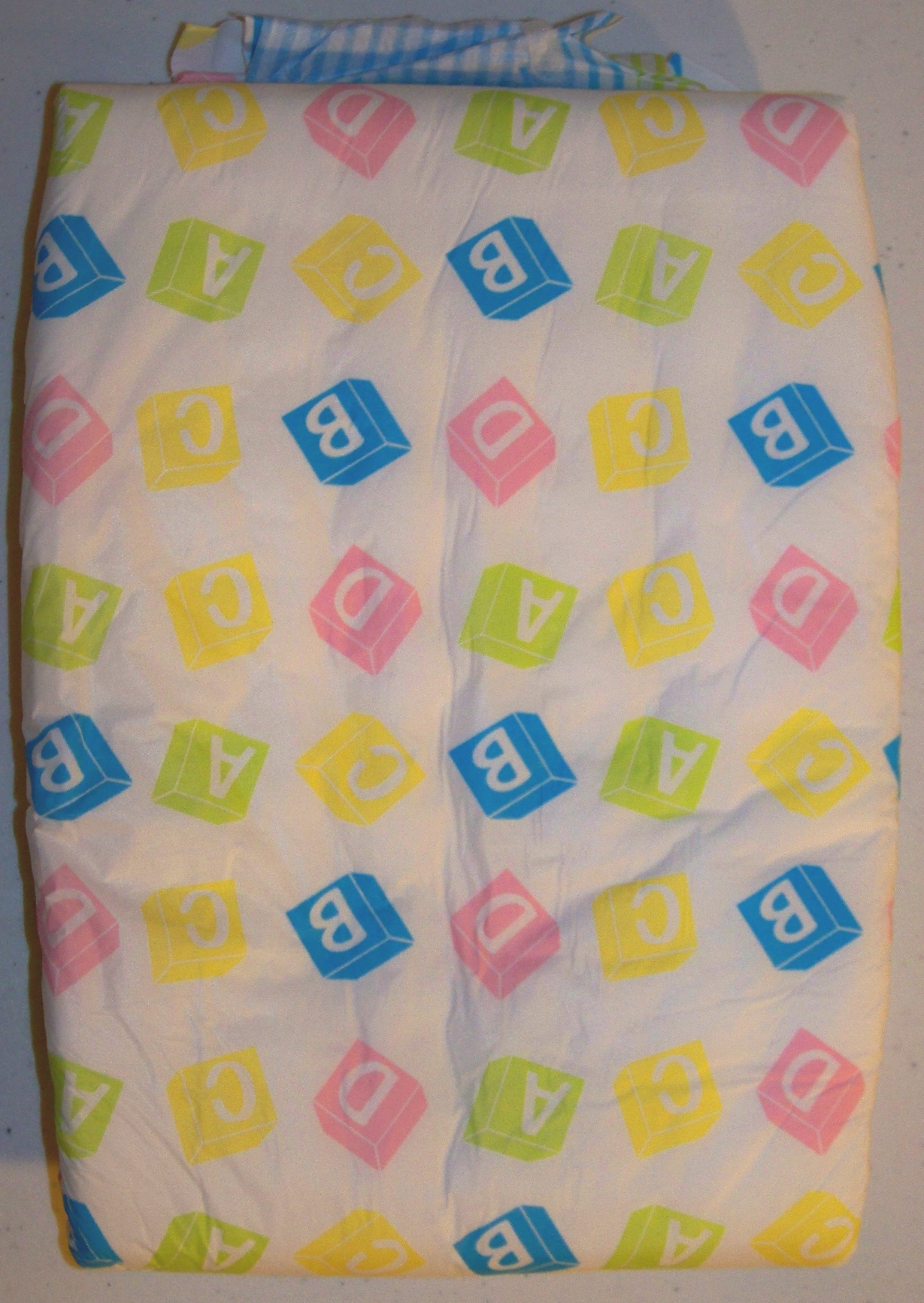 
To test their dry thickness, I stacked three diapers on top of each other, placed a heavy book on top of them, and measured their height. Together, the 3 diapers had a height of approximately 9.0 cm (3.5 in). Thus, the dry thickness of a single folded diaper is 3.0 cm (1.2 in).

The ABU BareBum uses a double-tape design with tapes that measure 3.8 cm (1.5 in) wide each. Similar to other ABU products, they use the clear tapes with blue tips that ABU started using in mid-2017. 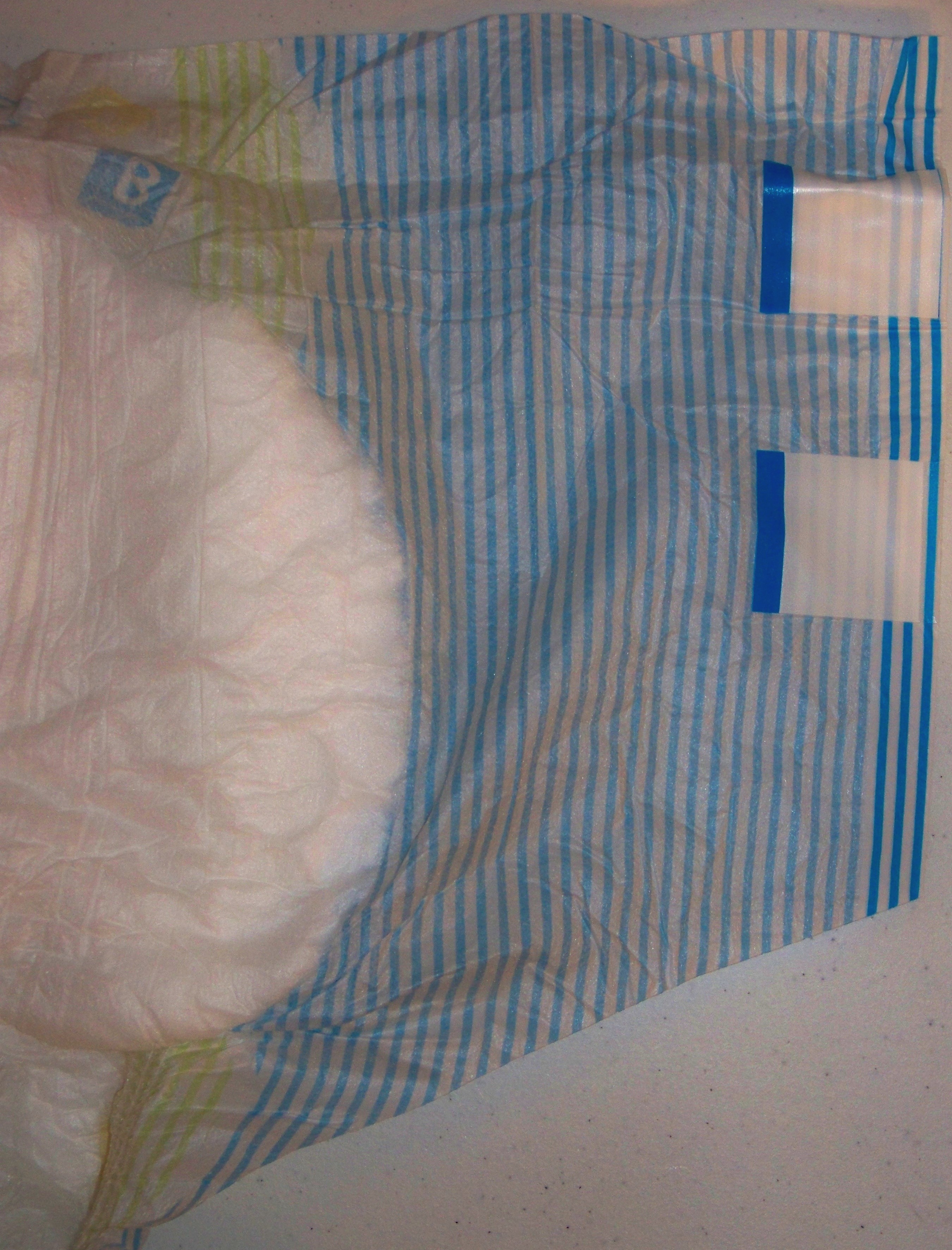 
The inside of the diaper includes a rectangular aqua-colored zone. The padding is arranged in an hourglass shape. The padding feels very dense and packed, more hard than soft, with a honeycomb pattern. The diaper has standing leak guards. It has only a back elastic waistband. 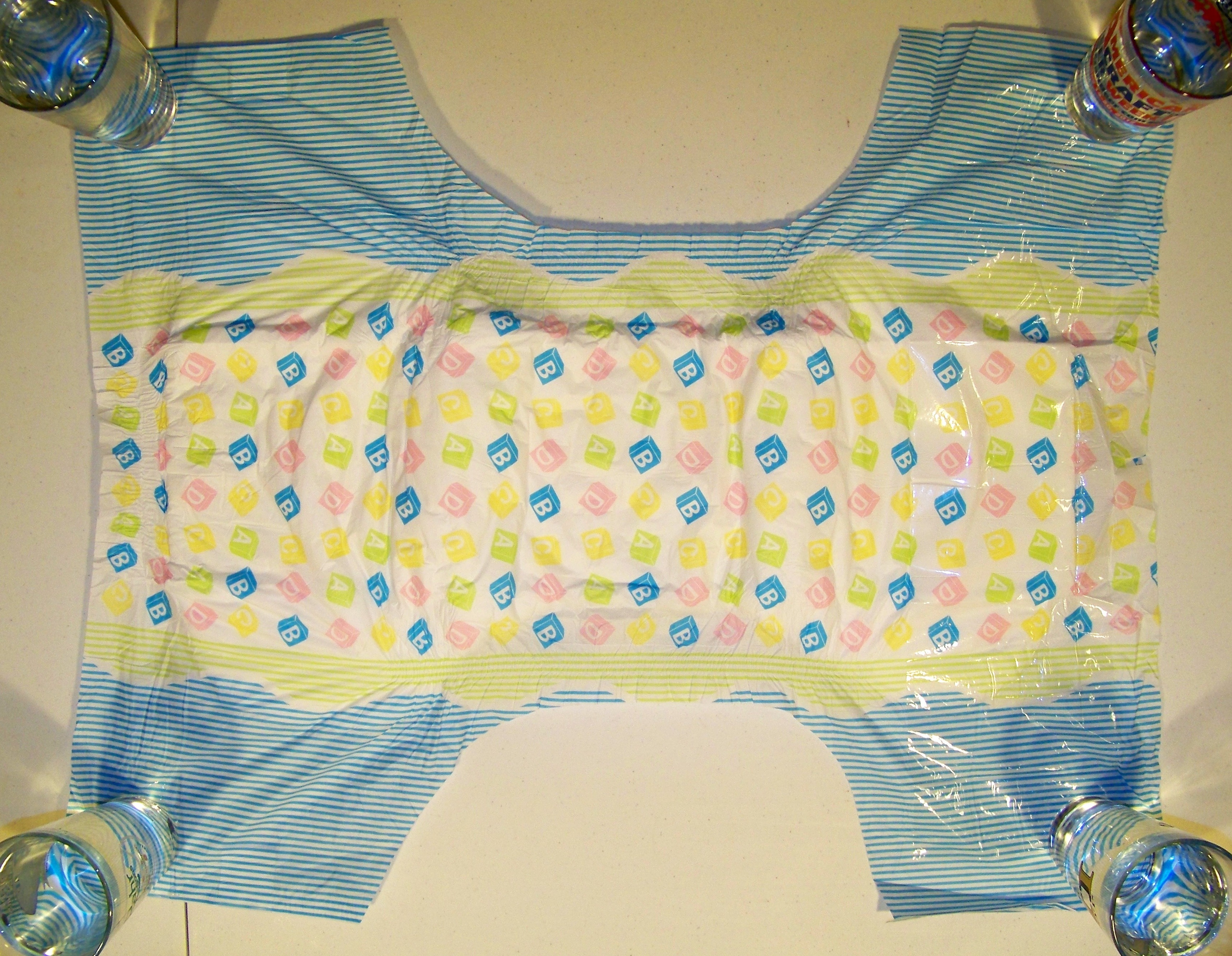 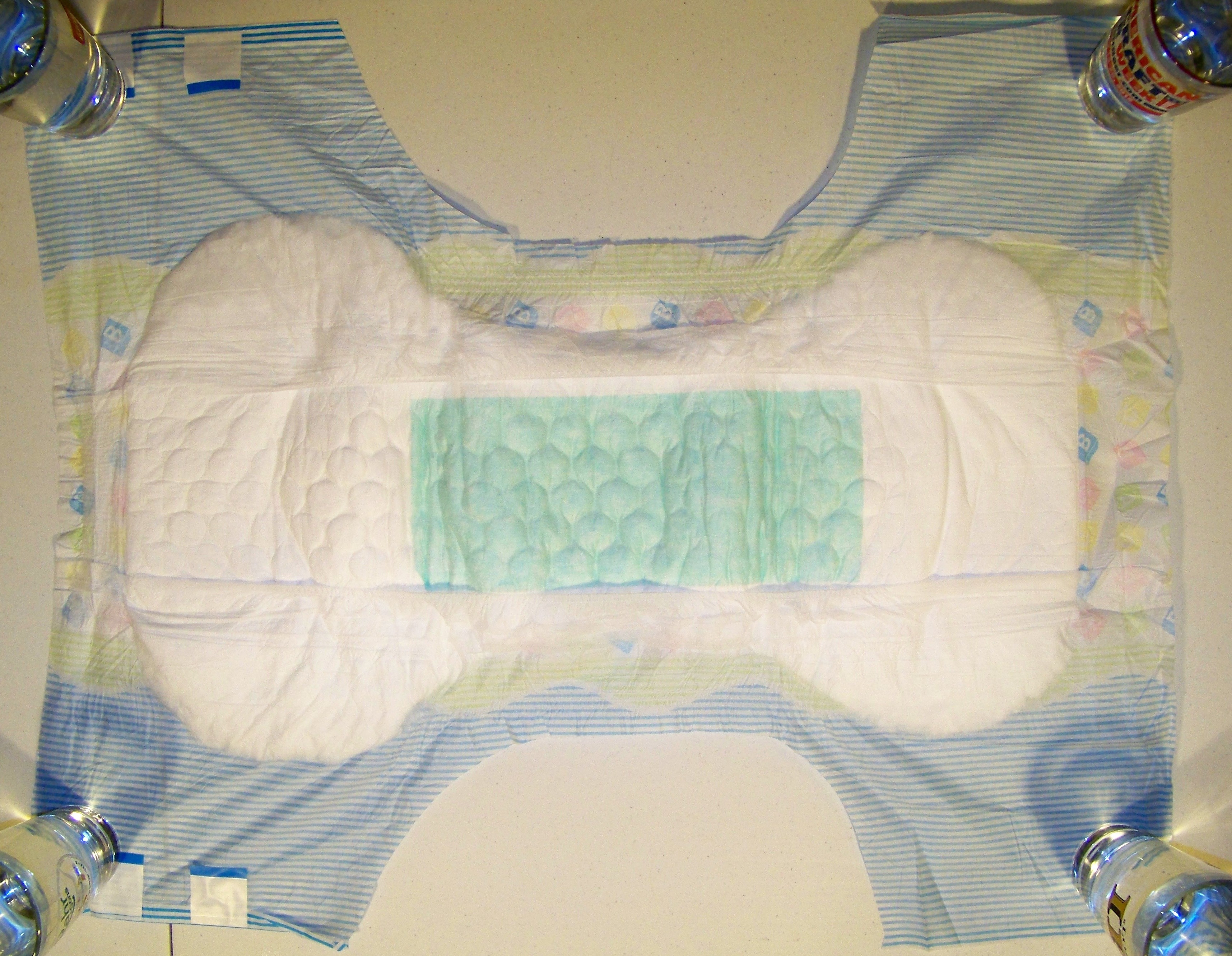 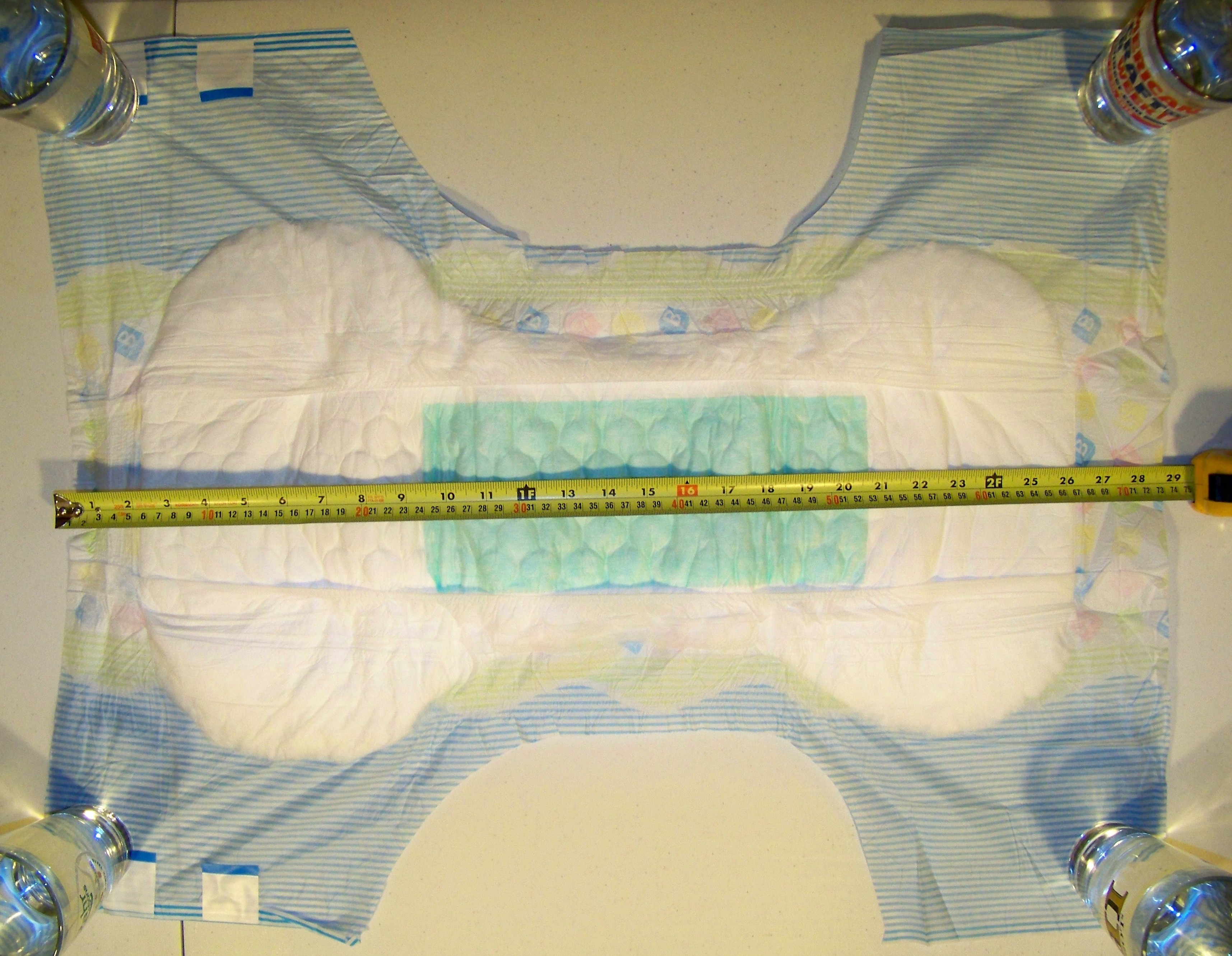 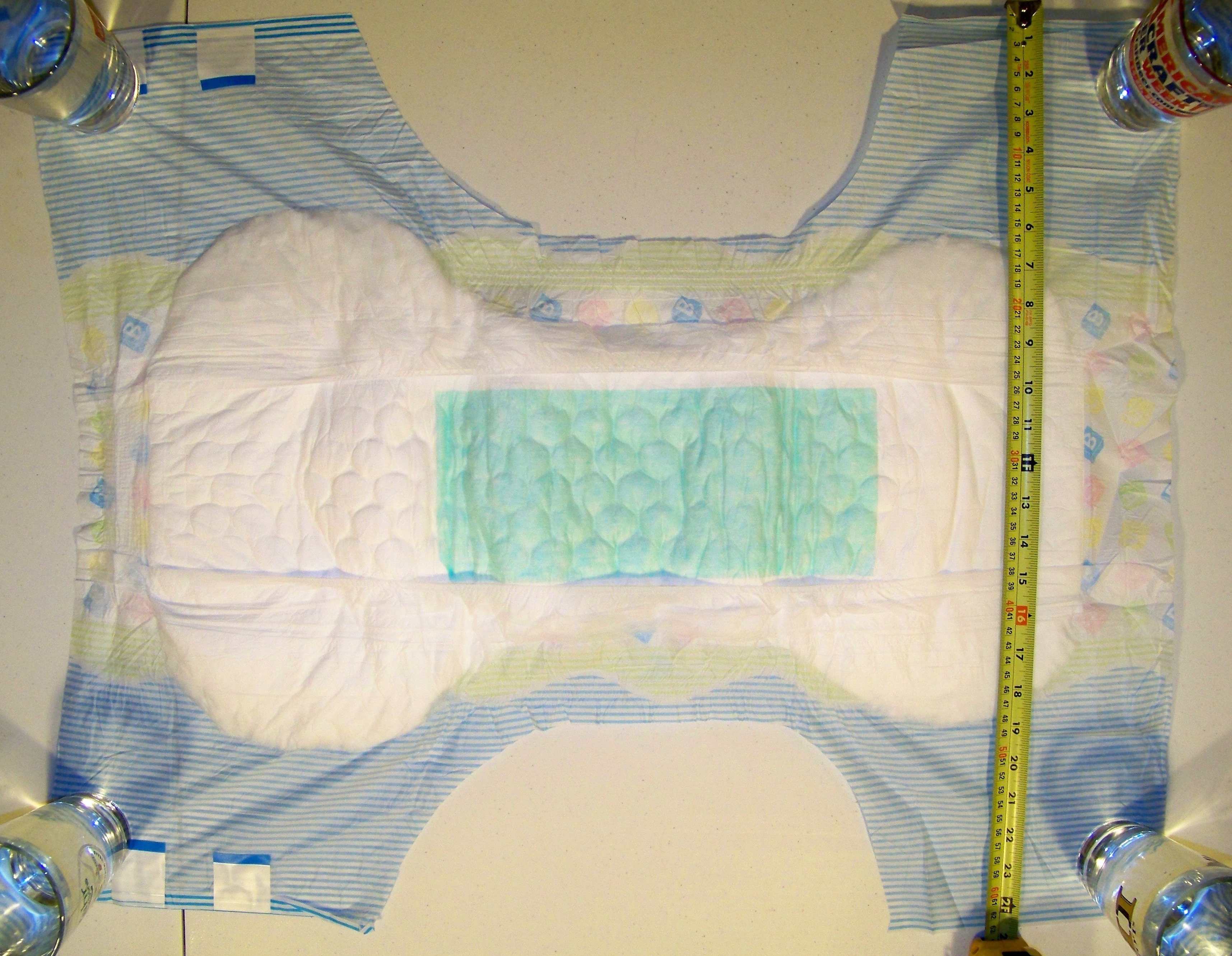 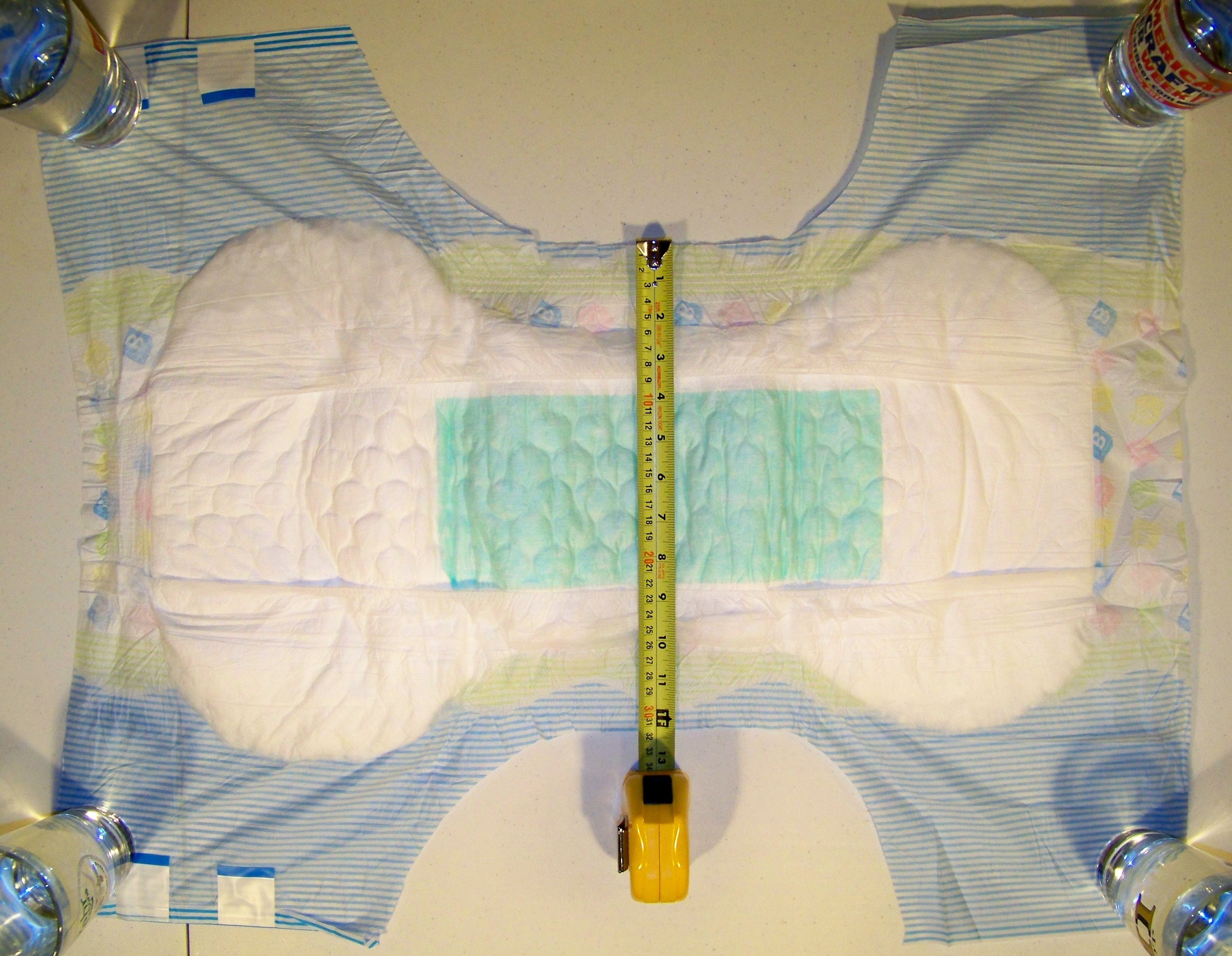 Over 3 replicates of this H2O capacity test, the ABU BareBum averaged 2071 mL with a standard deviation of 51 mL.

I folded the diaper back up to compare its thickness to a dry diaper. It had expanded to roughly 10.5 cm (4.1 in), about 3.5x its original size. This is a pretty large change and perhaps expected of a thinner, high-SAP diaper. The tapes did not move throughout this test.

The average dry mass of this diaper, based on 6 replicates across both tests, was 159.5 g with a standard deviation of 7.0 g.

I weighed and put on a fresh diaper and wore it while going about ordinary activities. The diaper lasted a total of 7 hours before beginning to leak. During my test, I had about 5 wettings and the diaper leaked badly on a flood at the end. I recorded a change in mass of 1045 g, which was close (~6.5 "half-floods") to my previously measured capacity. I didn't notice any major shifts in the tapes over time.

With a 36" waist, I am actually slightly above the listed size range for the medium ABU BareBum. I normally wear size medium in other diaper brands. This diaper seemed to fit my size about as well as other medium diapers with the tapes placed in similar places.

At the case size, this works out to $1.65/diaper and based on my test results this diaper holds 4.2 "half-floods" per dollar. This price makes it highly competitive on both price and efficiency compared to other ABDL diapers, as one of the cheaper price points period currently among ABDL diapers, but also as one of the better diapers period when it comes to capacity.


Interestingly, whereas the ABU BareBum tested solidly but very ordinarily as a high-end "premium" diaper on the rapid H2O test, it substantially overperformed in the saline test. This was one of the most unexpected results of my January 2018 panel. The ABU BareBum is specifically priced as a cheaper ABDL diaper and lacks the full slate of "premium" features like dual waistbands. Nonetheless, it tested exceptionally and consistently well on the saline test, actually outperforming nearly all products including ABU's own Space/Simple/LittlePawz, and as of this writing is surpassed by only Tykables Overnight, ABU PeekABU/Simple Ultra, and Thrust Vector Crinklz.

It would seem that the ABU BareBum is a hidden gem – one of the legitimate best-performing ABDL diapers on the market, but one which is priced as though it is a lighter offering. The ABU BareBum made clear improvements over the original BareBum, with improved outer materials that resolved key weaknesses, one of the best capacities on the market, and an attractive price point. Inasmuch as I might name a key weakness, it's that I'm skeptical of the print, but this is going to be up to individual interests.

The ABU BareBum is one of the best bargains in ABDL diapers right now, and on that basis I think it has, as of this writing one of the handful of claims to being the best ABDL diaper overall.
Last edited: Mar 5, 2018

Excellent review. I wonder if there are other hidden gem diapers out there, since the abdl market as a whole seems very overpriced. (Making diapers in China for less than $1 each, shipping them across the ocean, and the selling them for $2-3+ each sounds like a *very* ethically responsible thing to do.

SorcerorElf said:
Excellent review. I wonder if there are other hidden gem diapers out there, since the abdl market as a whole seems very overpriced. (Making diapers in China for less than $1 each, shipping them across the ocean, and the selling them for $2-3+ each sounds like a *very* ethically responsible thing to do.
Click to expand...

Honestly I'm not even sure how Crinklz got their price down to $2 each- but it's well worth it especially considering the prints. Before Northshore picked them up, they too also sold for about the same $4.50 each so it might possibly be an economy of scale thing going on there.
N

Just order these for the wife and I will update after we try them.
H

If you look at a Luvs diaper, you can see some similar patterns on the sides on the Bare Bums. The prints on these are definitely pastel, and definitely juvenile/pediatric. They actually look like a diaper.
F

Bare Bum diapers are one of my favorite "all purpose" diapers, i.e. discreet with sufficient absorbency for daytime use and good for a normal night of wetting. I like the pastel printed blocks, pleasing but not overwhelming.
You must log in or register to reply here.
Share:
Twitter Reddit Pinterest Tumblr WhatsApp Email Link
Top