Here, I will review the Abena Premium Air-Plus X-Plus in size medium (M4), purchased in May 2013 in the United States from XP Medical. The advertised sizing for the Abena Air Plus line is as follows:

The diaper includes two yellow wetness indicators. There is no distinct landing area for tapes. The lot number is stamped in faint black ink on the back of the diaper. 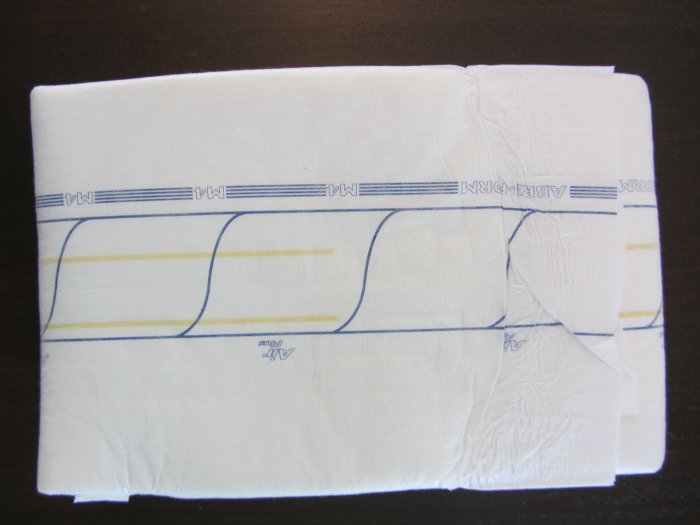 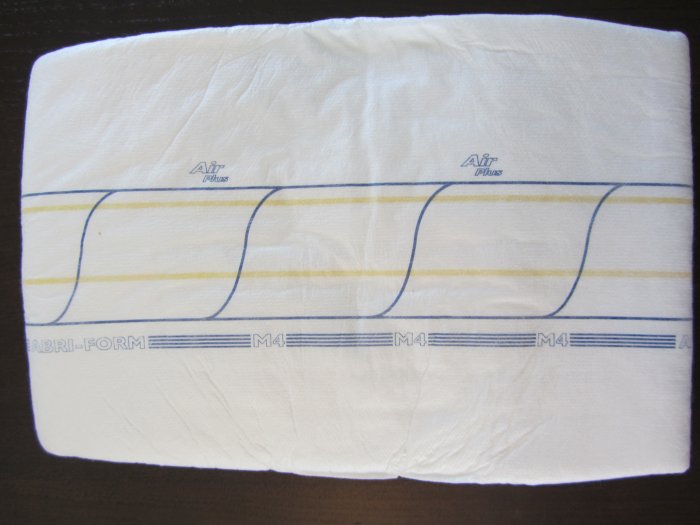 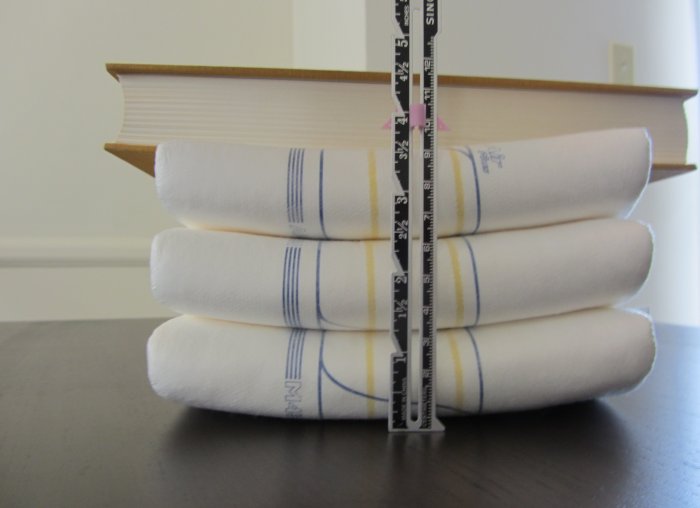 
For comparison, I placed a book of equal size on top of a stack of three original Abena X-Plus diapers. The original X-Plus diapers were exactly the same thickness as the Air Plus X-Plus. 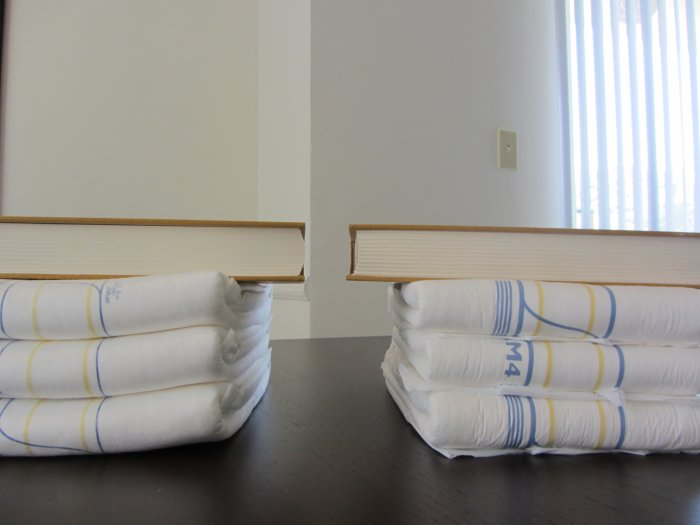 
The Air Plus X-Plus has the same double-tape design as the original X-Plus. Each taping position has a pair of tapes, one blue and one white. If the blue tapes come undone, they can be pulled off, and the white tape is available as a backup. The white tapes can also be used to help fold up and dispose of a used diaper. 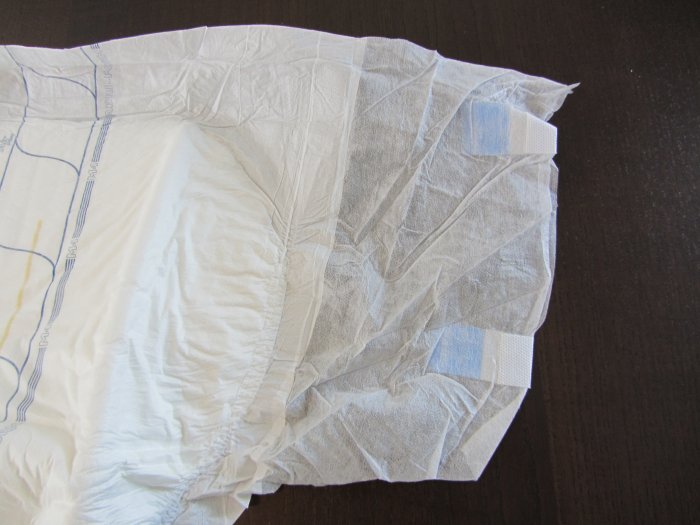 
Like the original Abena X-Plus, the Air Plus X-Plus features leak guards that run the length of the diaper. There is no elastic in the waist. 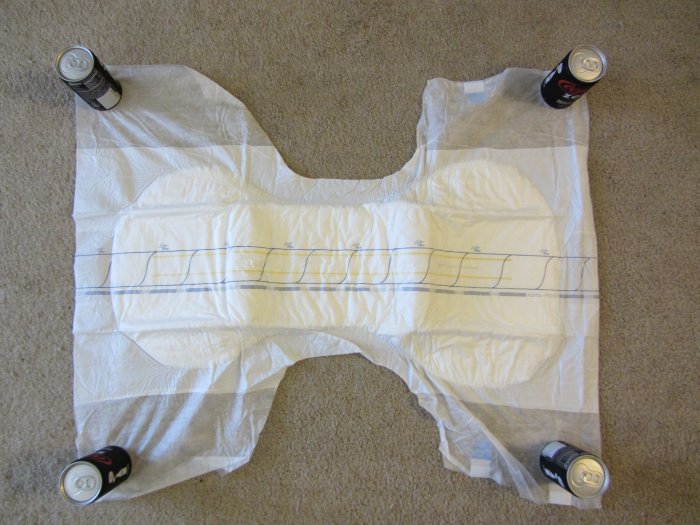 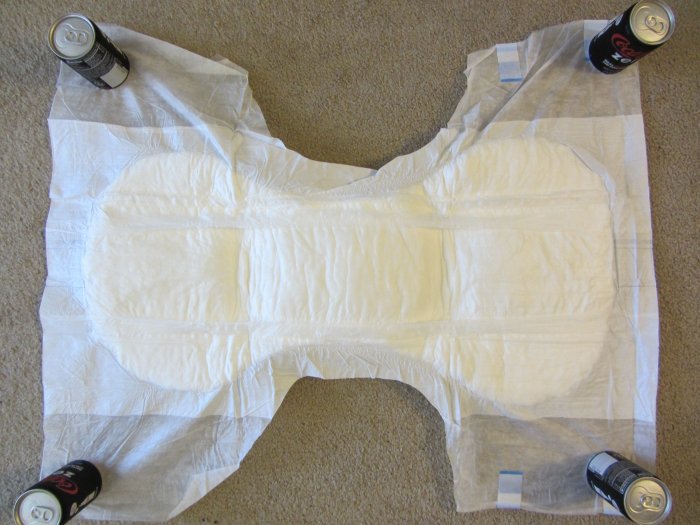 
The fit of the diaper was good. I have a 36" waist, and I found that the tapes just reached the part of the diaper that has padding underneath. I suspect that most people who are on the border between a size M and a size L would be happier with the larger size.

I ran two tests of the diaper's performance. The first was a test of the diaper's capacity under controlled conditions. I put on a diaper and poured 100 mL of water down the front at a time. After each pouring, I sat in a chair for 30 seconds and then checked for leaks.

I had to redo the tapes twice during the test because the diaper sagged a lot. After the first 1000 mL, I had to re-do the top front tapes, replacing the blue tapes with the white back-ups, to get a good fit. I re-did the bottom tapes after I had poured in 1900 mL. My chair stayed dry until I had poured a total of 2300mL of water down the front. After the 23rd pouring, I noticed a very small wet spot on the chair. After I added another 100mL, a few more small wet spots appeared. At this point, I stopped the test.

The sides of the diaper seemed to stretch from the weight of the water. Near the end of the test, it felt as if the diaper might slide down my hips and fall off of my body. I also noticed that the front right tape kept coming undone. This could be a result of my pulling on the front of the diaper to pour water in. The tapes do seem somewhat less secure than the tapes on most plastic-backed diapers.

After the controlled wetting test was over, I took the diaper off and folded it up. It measured 11 cm (4.25 in) thick. A fully soaked X-Plus is more than three times thicker than a dry one. 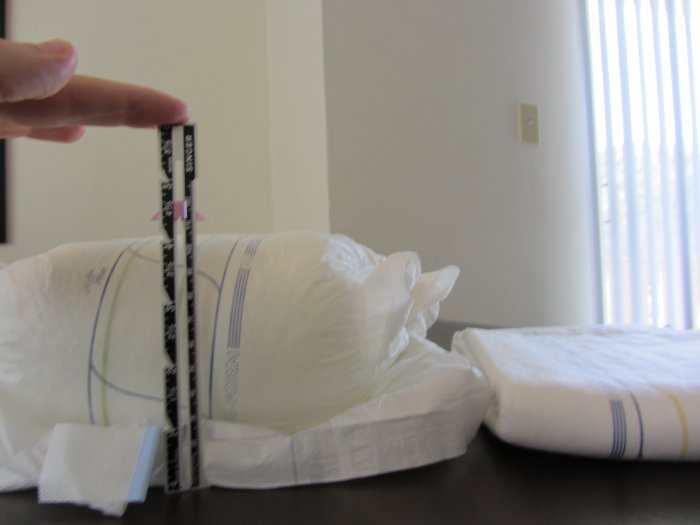 Dry Diaper Next to Wet Diaper After Quantitative Test


I then put on another diaper and wore it for my normal activities. The diaper lasted for six hours and forty-five minutes. I decided to take off the diaper when I noticed a tiny wet spot on my chair. I had wet the diaper three times. I would describe the first wetting as a flood and the other two as moderate.

I did not find the diaper noticeably more or less comfortable than a plastic-backed diaper. Despite the cloth-like cover, my diaper area did feel a bit warm, as it usually does while wearing a diaper.

There were some small problems with odor control. On a couple of occasions, I noticed a urine smell, either right after wetting or when leaning forward in my chair. I don't usually notice any odor when I wet plastic-backed diapers.

I also noticed a problem with sagging after this test was over. I had been wearing the diaper under shorts. As soon as I removed my shorts, the diaper sagged way down onto my hips. I had tried to tape the diaper more tightly this time, but the cloth-like cover had stretched out, making the diaper sag a lot when not supported by pants.

After this test was over, I did two more supplementary tests. First, I put on another diaper and went for a two-mile walk, keeping the diaper dry throughout. Compared with my experiences out walking while wearing plastic-backed diapers, including the original plastic-backed X-Plus, my diaper area got less warm. The breathable outer cover does appear to have a benefit, as long as the diaper stays dry. I also noticed a slight chafing sensation on my thighs as I walked. I do not ordinarily feel this sensation when walking while diapered.

As a final test, I tried wearing an Air Plus diaper overnight. When I woke up in the middle of the night at about 4 AM, I wet the diaper and went back to sleep. When I woke up again at 7 AM, the diaper had not leaked onto the bed, but the smell of urine was overpowering. By contrast, I have often worn original X-Plus diapers to bed, and though they occasionally leak, I generally do not notice a strong odor on waking up after wetting.

The Abena Premium Air Plus X-Plus offers the same excellent absorbency and the same convenient double-tape system as the original, plastic-backed Abena X-Plus. Is the breathable cover worth an extra ten cents per diaper? For AB/DLs who want a noisy diaper, of course the answer is no. Because of their tendency to sag, Air Plus diapers are also a poor choice for anyone who plans to wear a diaper without pants, such as when lounging in a t-shirt and a diaper.

For those who are looking for a diaper that is highly absorbent but discreet, the question is more complex. The Abena Air Plus X-Plus is definitely quieter than the original X-Plus. It is not completely silent, but it is close to it. The breathable cover makes it somewhat less effective at odor control, however. For those who may have to stay in a wet diaper for more than a short time, as many users of highly absorbent diapers presumably do, the original, plastic-backed X-Plus may be the more discreet choice.

In terms of comfort, the breathable cover prevents the diaper from becoming uncomfortably warm while it is dry. Once the diaper is wet, the breathable cover no longer helps to keep the diaper cool. I found that the Air Plus chafes more than a plastic-backed diaper while walking, but some other AB/DLs have found that plastic-backed diapers chafe more than diapers with cloth-like covers. Whether the Air Plus X-Plus is more comfortable than the original is very much a matter of taste.
Last edited by a moderator: Dec 14, 2014

Has the hourglass pad been changed on this model, like it has for the plastic backed ones?

Had these in Asia too. Leaky leaky leaky. Can't tell if your leaking from an actual part of the wick coz of the damn cloth. Even tried peeling it off for the original Abri form feel
Share:
Twitter Reddit Pinterest Tumblr WhatsApp Email Share Link
Top