Abena's Abri-Form X-Plus, commonly referred to as Abena S4/M4/L4, is their top of the line diaper and a stalwart in the category of "premium" adult diapers. Abena has recently phased out its plastic-backed line of this product in Europe in favor of selling only its cloth-backed Abri-Form line, but continues to offer the plastic-backed version in the medium and large sizes in North America.


The Abri-Form X-Plus has a distinct pattern along its center, which notes the M4 size and model. It has two yellow wetness indicators which run the length of the diaper, which turn blue when the diaper is wet. There is no distinct landing zone panel for the tapes. Both sides of the folded diaper look identical. 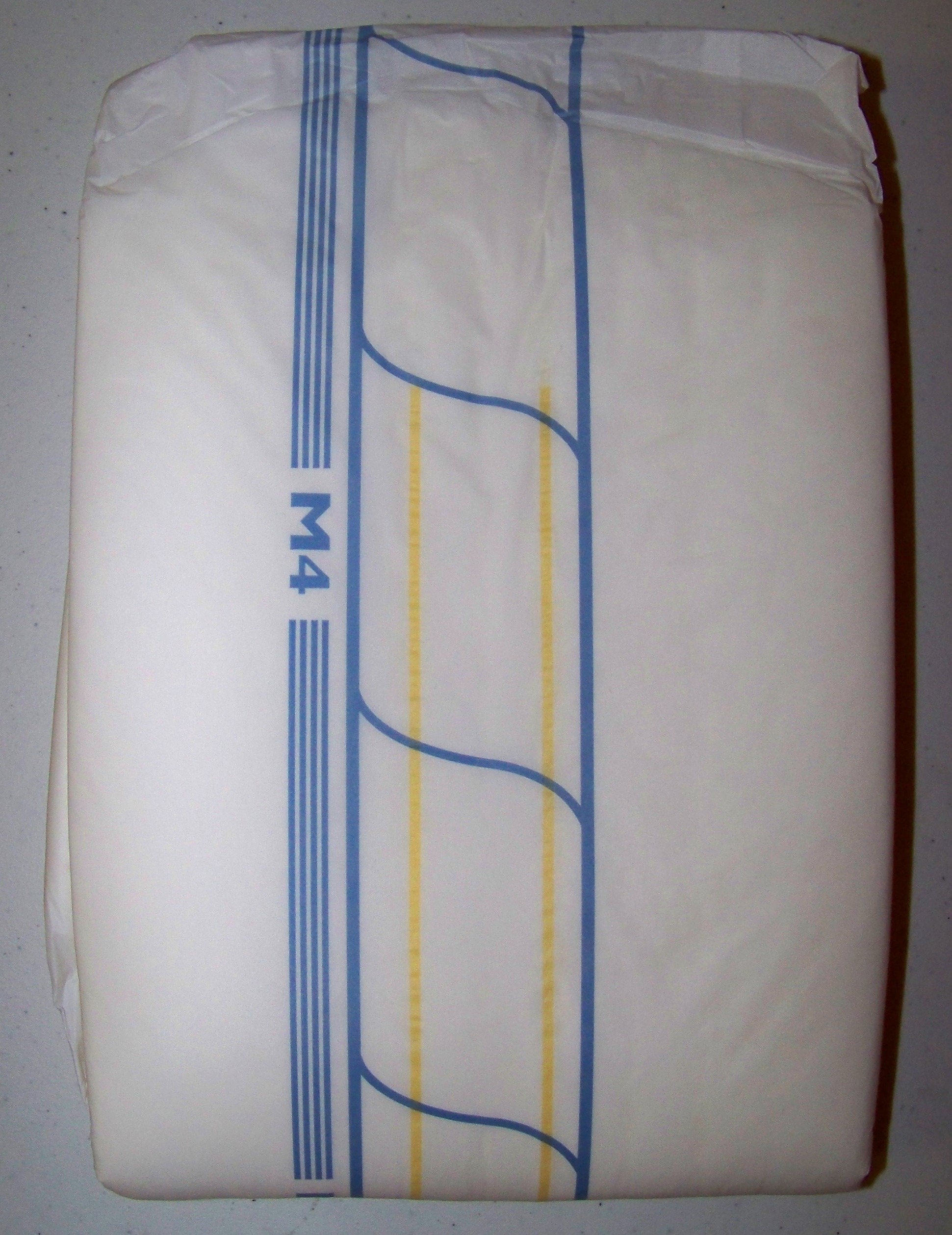 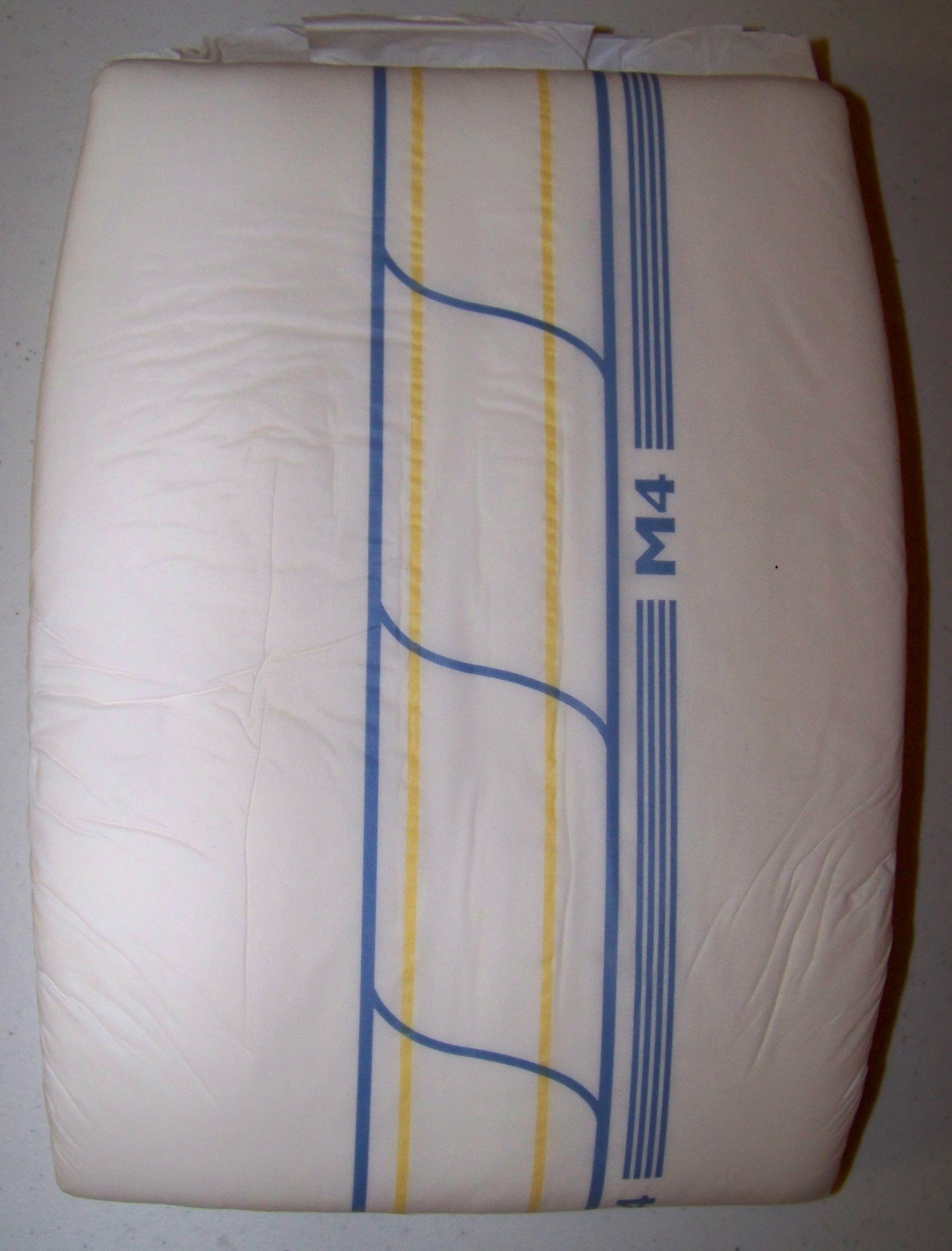 
To test their dry thickness, I stacked three diapers on top of each other and placed a heavy book on top of them, and measured their height. Together, the 3 diapers had a height of approximately 10.5 cm (4.1 in). Thus, the dry thickness of a single folded diaper is 3.5 cm (1.4 in). 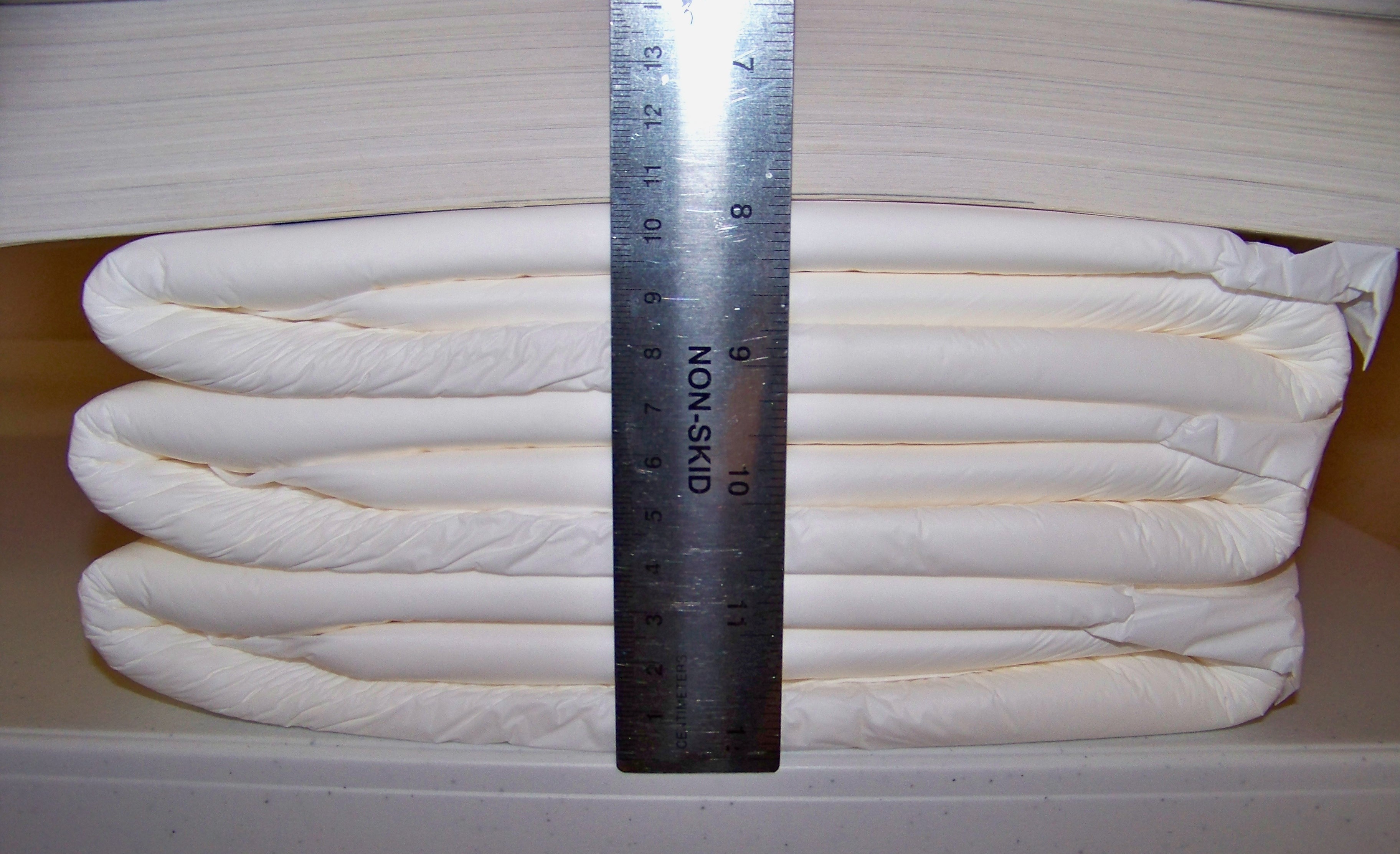 
One particularly impressive feature of this diaper is the unique tape design. Abena Abri-Forms have double tapes with a bottom blue tape and a white top tape. If the blue tape either becomes undone or you mess up placement of the tape the first time, you can simply peel the white tape off and use it to re-tape the diaper. It also makes it easy to tape up the diaper for disposal after use. The diaper uses the standard 4-tape design used for most adult diapers. 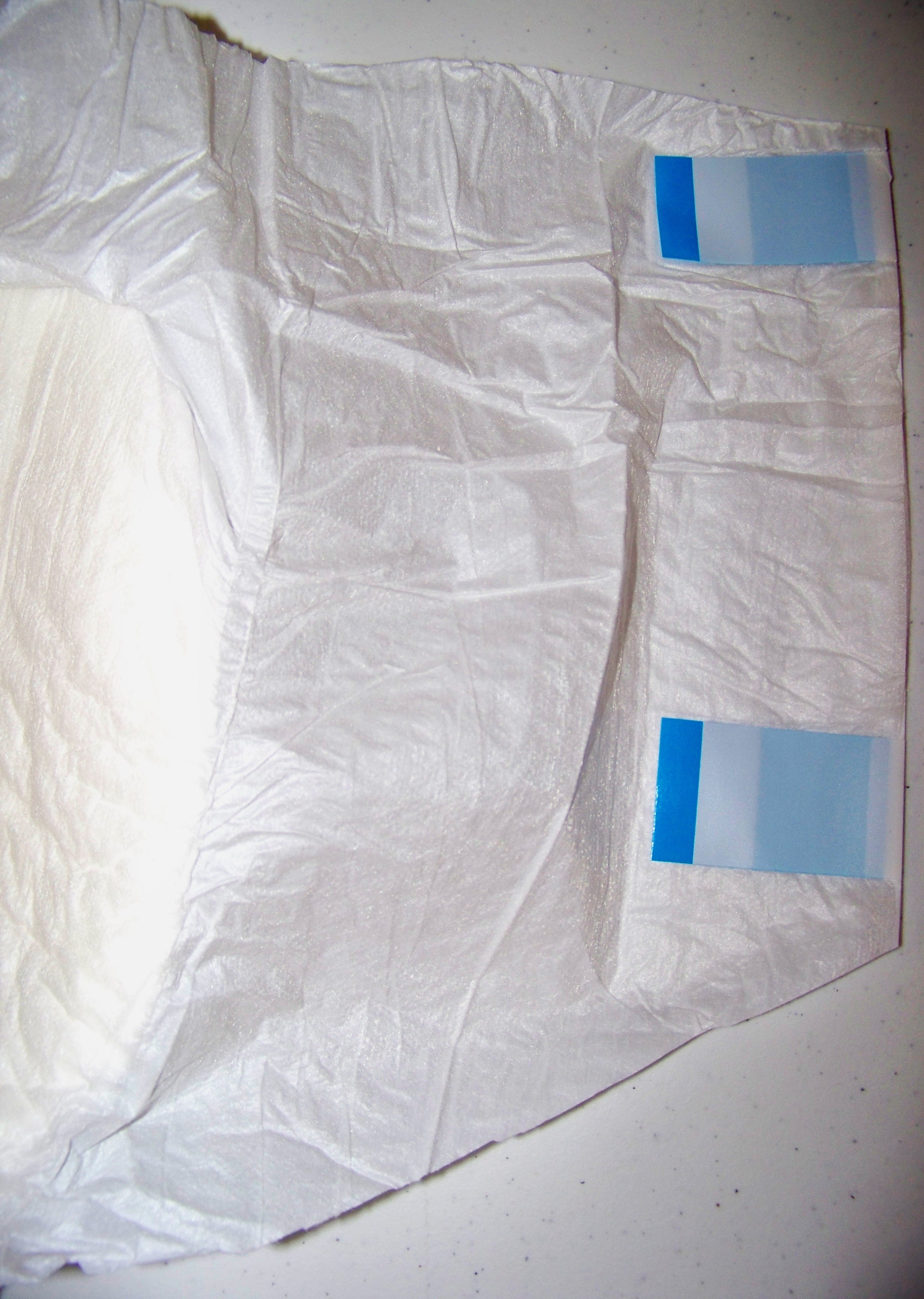 
The outside of the diaper uses a relatively thin-feeling and soft plastic cover. It does not crinkle particularly loudly as the diaper is unfolded. The inside of the diaper is all white and the padding is arranged in an hourglass shape. The padding is very soft and compressed, even by the standards of diapers. It has a smooth, slightly oily feel to it. The diaper has standing leak guards. There is an elastic waistband in the back, but not the front. 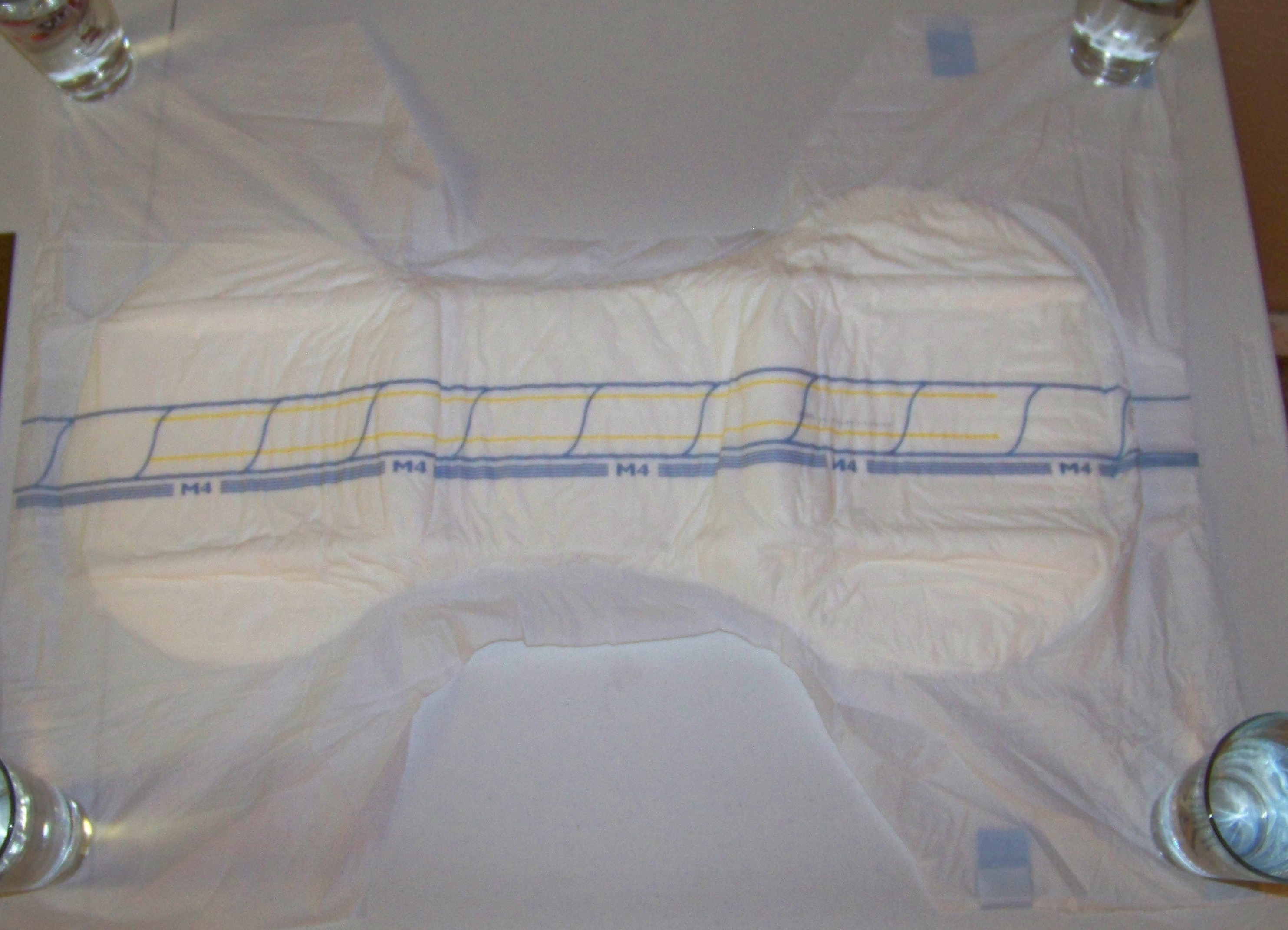 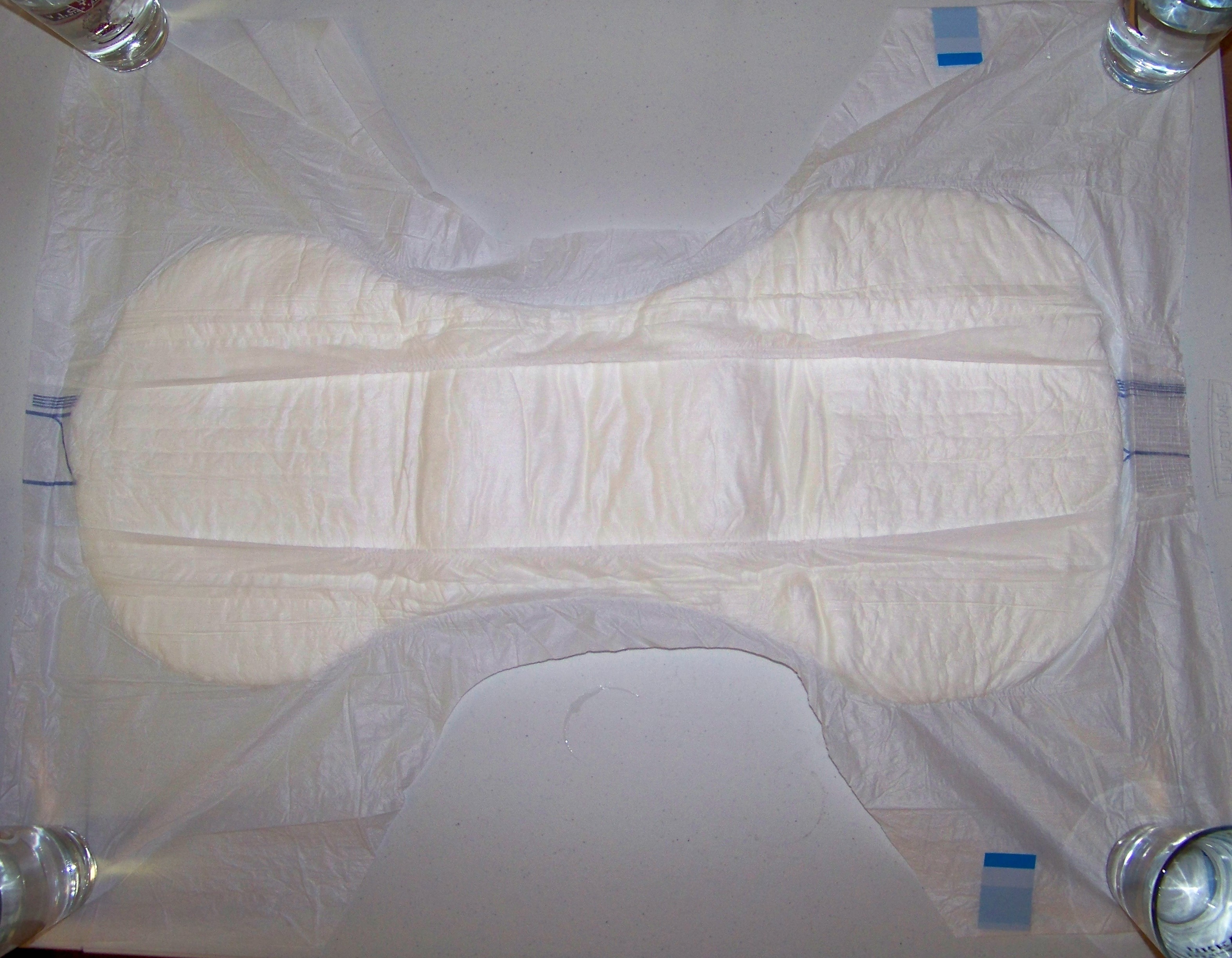 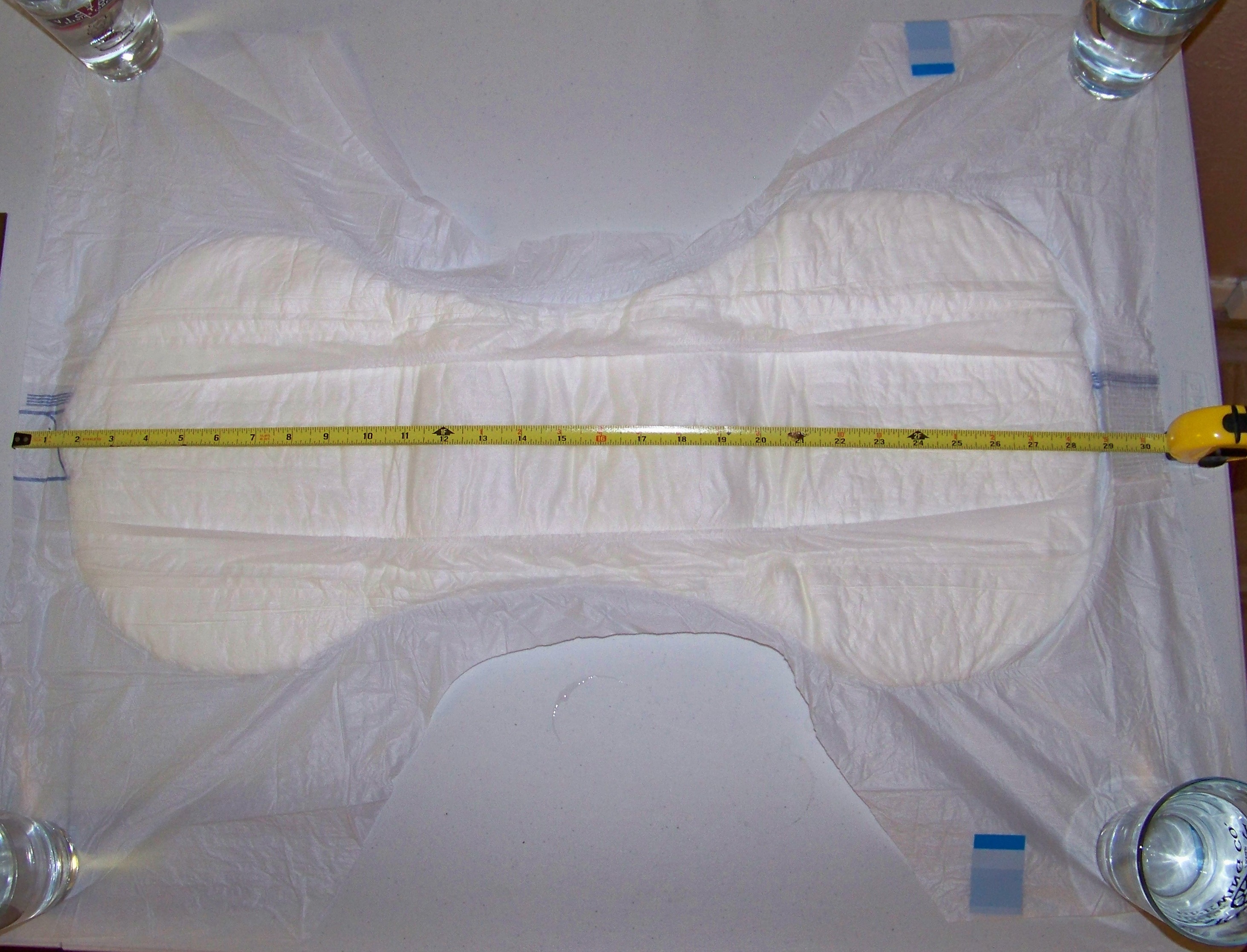 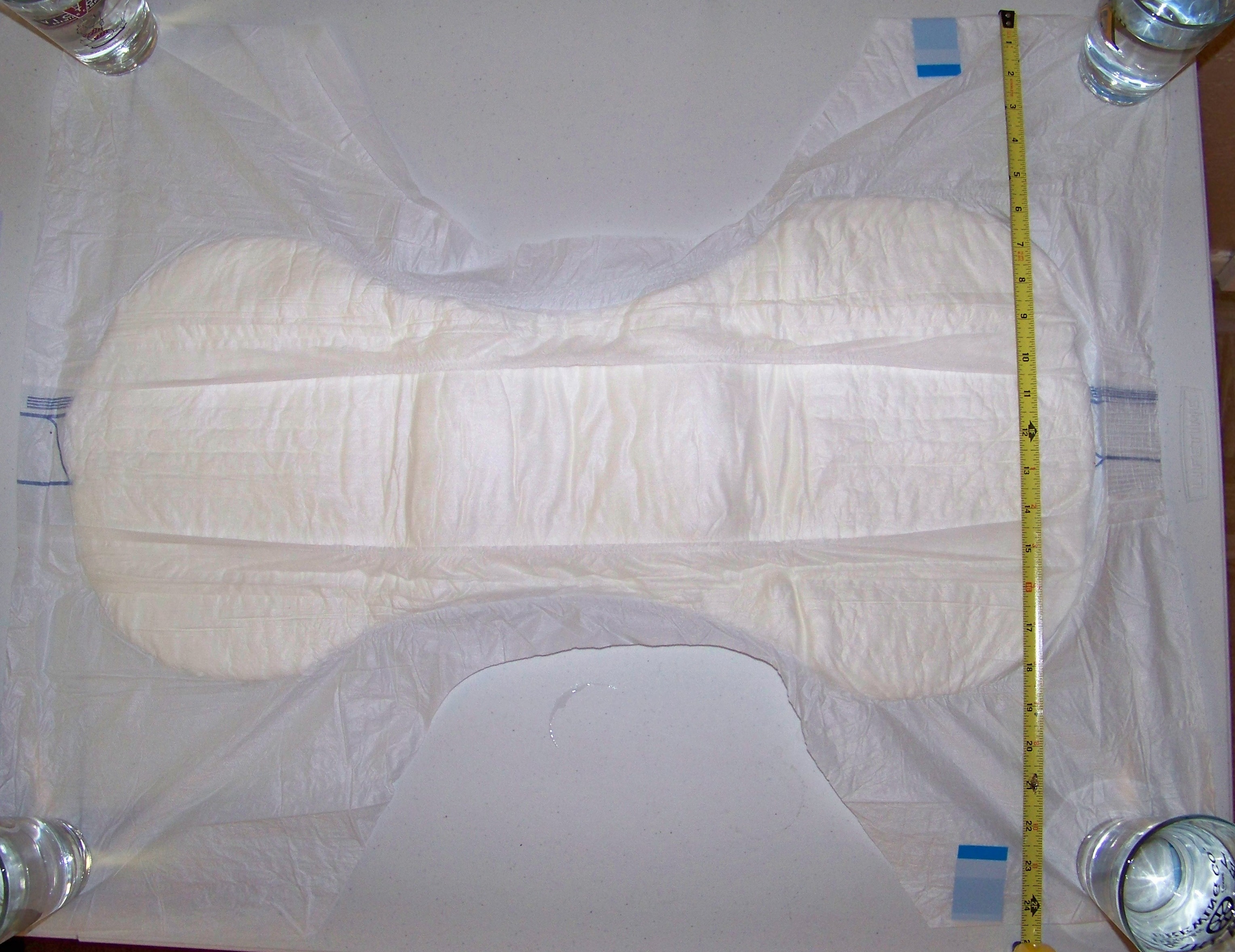 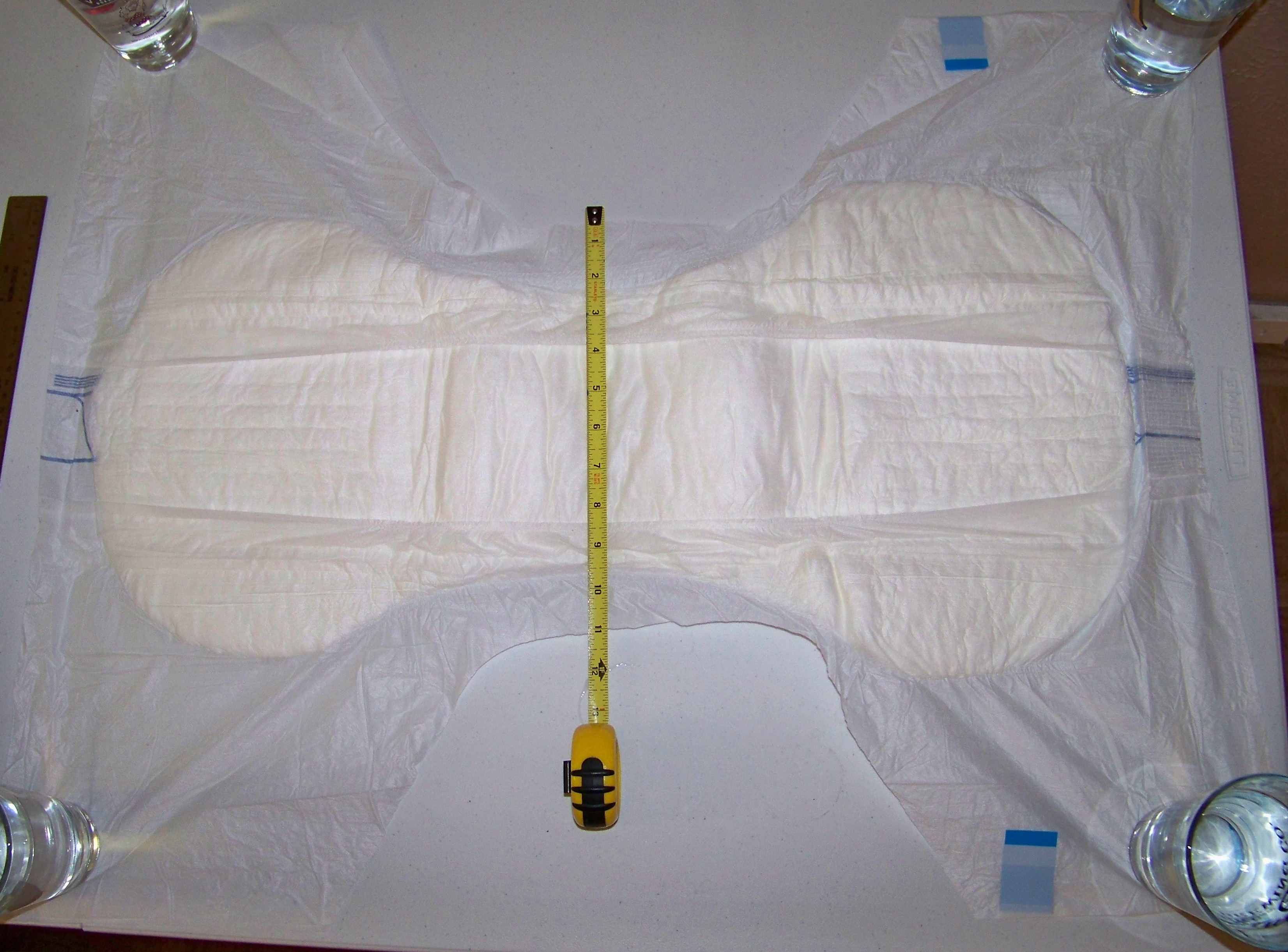 
To test the capacity of this diaper quantitatively, I ran a test to simulate use. I put a diaper on and then repeatedly poured water into the front of it in 100 mL increments and sitting down in a chair for 30 seconds each time to give the diaper a chance to absorb the liquid, pace the process, and see if it would leak when sitting. After 1700 mL of water, I noticed wetness around the leg cuffs. At 2000 mL of water, the diaper began to leak on my chair, and I ended the test.

I then took off the full diaper and folded it back up to compare its thickness to a dry diaper. It had expanded to roughly 6.5 cm, almost twice its original thickness.


I then put on a fresh diaper and wore it while going about ordinary activities. The diaper lasted a total of 6.5 hours, during which time I had about 3 larger wettings and some minor wettings, but did not flood it.

With a 36" waist, I am in the center of the listed size range and found the medium size fit me very well. I would be surprised if this size would be a good fit for the upper and lower ends of the very broad listed range. The top of the diaper feels like it comes up high enough to cover everything without being really tall, somewhere around average among diapers that I have tried.

The tapes stuck very well, despite the fact that I tend to tape diapers very tightly. In general, I've found that the M4 tapes, once placed, almost never move even if the diaper is overly tight, and instead are actually more likely to fail by altogether ripping off from the wing. Having only one elastic waistband in the back actually works very well at keeping the front flush with the body since the tapes don't shift and the diaper does not loosen.

The plastic is very muted, especially under clothing. There is always audible crinkling with any plastic-backed diaper, but the M4 has a lot less of it than other diapers that I have tried. This plastic backing clearly seems to have been chosen with discretion in mind.


I purchased these diapers from XPMedical at 59.95 USD for a case of 42, including shipping to the contiguous United States. This comes to $1.42/diaper, a typical price for high-end, "premium" adult diapers. One could certainly save money per unit capacity by opting for a diaper in a lesser weight class, with Abena's own similar Super (M2/L2) and Extra (M3/L3) diapers being excellent examples, but among high-capacity diapers, the M4 clocks in towards the lower end of the price range.

The Abena Abri-Form X-Plus stands as perhaps the benchmark diaper among top of the line, "premium" adult diapers. Its capacity is one of the highest on the market and is about as high, in my experience, as a diaper can reliably go without starting to have problems with sagging enough under its wet weight that the leak guards fail. Between the double tapes, the soft feel, good fit, and low noise, this diaper leaves an impression as being an all-around well-thought-out and effective design.
Last edited: Dec 25, 2014

I have been using Abena M4 for the last 10 years and nothing comes close to these,I haven't tried Dry 27/7 but would like to. I also like ATN ,

I've always had problems with Abena, they were once a diamond in the rough, but now they're right in the middle.

My experience with the fit is probably due to the weak plastic backing. I would put them on nice and snug but they always seemed to get stretched out. The fit seemed to loosen and if I wanted to I could let the diaper drop without assistance.

The next major issue is the padding shifts pretty badly. I always seem to find the padding piling up in the center. I'm not a very active person, but walking seems to destroy it.

A good diaper but could use improvement.

MeTaLMaNN1983 said:
I've always had problems with Abena, they were once a diamond in the rough, but now they're right in the middle.

My experience with the fit is probably due to the weak plastic backing. I would put them on nice and snug but they always seemed to get stretched out. The fit seemed to loosen and if I wanted to I could let the diaper drop without assistance.

The next major issue is the padding shifts pretty badly. I always seem to find the padding piling up in the center. I'm not a very active person, but walking seems to destroy it.

A good diaper but could use improvement.
Click to expand...

Thanks for the comment. I've been wondering if to get some of these before they turn extinct but I always like nappies that I can put on DEAD tight! A landing zone makes sure the nappy stays snug all night, instead on waking up with it loose & leaking around the back legs. If this has no landing zone what so ever, & with identical "try or die" tapes as the BetterDry, the chances are this is going to be a FAIL. I tried BetterDry recently, & every single one was useless. The Tapes would either come off during the night or it would rip the poor quality plastic. Medical nappies have REALLY been shown up since the boom of the ABDL market products.

Anyway, thanks again for going against the grain, & telling it like it is.
Travis.
D

I really like them my self. The plastic backing is very remisent to the days of baby plastic backed diapers and I find the noise level is perfect. When under clothing its not really noticeable but still their... When I go out in plubic with them on and their background noise noone going to notice. But it still sounds like its going there a megaphone to you.....
As with all dispousibail diapers I found that if you unpackaged them and let them breath. They bulk up even more for that thick padding that most of us love
C

Would like to see a review comparing the effectiveness of the tapes with the cloth backed version in comparison to the Tena Maxi, if that's possible.
L

I tried a pack of these and after wearing a couple of them I was not impressed. They seemed to loosen up after the initial taping. This was easily fixed by tightening one of the white tapes. But I did not give up on them because for their absorbancy they are just so incredibly comfortable. By the time I finished the pack I had learned to adjust my taping and they stay snug from the get go (until you really soak them). I've worn the Northshore Supreme's but I have a hard time sleeping in them because they are so bulky. That's not the case with the Abena's. I've been ordering from XPmedical to get the free shipping when you buy a case. I usually only wear on my days off and I can get plenty of hours from these without leaking.

My parents love this (they buy it for me) but not my top favourite nappy.
J

Abena abriform X-plus m4 diapers are comfortable and fantastic. These diapers are very absorbent and they are awesome to have,

Abena abriform X-plus m4 is an amazing diaper and they give alot of comfort happiness and joy.
D

I have read through discussions and threads about the Abri-form M4 that the quality, construction, thickness, and performance has decreased for these. Can anybody confirm those observations?

DLC93 said:
I have read through discussions and threads about the Abri-form M4 that the quality, construction, thickness, and performance has decreased for these. Can anybody confirm those observations?
Click to expand...

Confirmed. They are a fairly low quality diaper now. A little better than Tranquility ATN, about on par with the USA version of tena and molicare, but lesser than confidry or northshore lites.

If you're looking for an equal to how they used to be years ago, I recently compared an old abena with crinklz (or betterdry) and found them to have nearly the same construction, but with a few extra improvements too.

I absolutely adore these nappies. They are one of my favourites, they are so absorbent and hold so much and I like the fact it has a wetness indicator also

Anyone else finding pinholes at the crotch area? just had 2 in a row. I Inspected the rest of the bag, but i cannot find any thing. I guess we will see how tonight goes. I'll wear something over them for protection.
You must log in or register to reply here.
Share:
Twitter Reddit Pinterest Tumblr WhatsApp Email Link
Top