ABDL and the Male Self

One of the cornerstones of ADISC is self-acceptance, which requires taking the time to understand AB/DL desires and balancing them with the rest of the self. Among the many obstacles some will experience along their journey are feelings of shame, guilt, and even self-hatred. For AB/DLs who are male, some of these feelings can be a product of incompatibility with male gender roles. This incompatibility is referred to by the concepts of Gender Role Strain (GRS) and Gender Role Conflict (GRC). Under gender role conflict theory, numerous empirical studies have shown that such conflict can produce self-esteem issues, depression, and anxiety both in adolescent and college-aged males (Watts et al. 2005). Issues of self-esteem often go hand-in-hand with feelings of shame, guilt, and self-hatred. These feelings can make it difficult for many male AB/DLs to understand who they are and complicate their individual situations.

Disclaimer: This article mainly pertains to males that identify as straight in their orientation due to the research papers used, though some parallels can be drawn for those of other orientations.


What are some of the traditional male gender roles?

Many of the traditional male gender roles or values occupy a set of masculine principals. Researcher Will Meek explains:

Meek (2011) said:
Other researchers examine larger cultural trends of male gender roles. Some notable work on this includes Levant et al (1992), who summarized traditional (hegemonic) American masculinity into seven principles. It is important to note that although these are a general trajectory for many men, that there are many different configurations of expression of these depending on individual and sub-cultural differences.

(1) restrict emotions
(2) avoid being feminine
(3) focus on toughness and aggression
(4) be self-reliant
(5) make achievement the top priority
(6) be non-relational
(7) objectify sex
(8) be homophobic
Click to expand...

Other research done by Watts et al. in adolescent boys found the same set of principals inherent in the sample's answers. The boys reported what the researchers noted as "Restricted Emotionality" and "Restricted Affection" (2005). Societal pressure was one of the main mechanisms behind the participants' socialization in their reported role conflict. As Meek has noted, it is important to understand there is a variety of actions and beliefs that can reflect one of more of these eight principals depending on the individual.


Other types of Male Gender Roles and Values

Meek (2011) said:
1. Male relational styles: males form relationships through shared instrumental activities
2. Male ways of caring: protecting others and action-empathy
3. Generative fathering: engaging and responding to a child's needs while attending to larger development
4. Male self-reliance: using resources to overcome adversity and "be your own man"
5. Worker/provider tradition: having meaningful work that provides for others
6. Group orientation: males tend to collaborate and associate in larger networks
7. Male courage: males can achieve great things through daring and risk-taking
8. Humanitarian service: fraternal organizations have a strong history of service for others*
9. Men's use of humor: this can be a means for connecting to others and coping with stress
10. Male heroism: heroic acts have a long tradition as part of manhood
Click to expand...

These "strengths" of masculinity, like the previous eight principals, can encompass a wide variety of actions and beliefs and have many different configurations in the individual. It is important to note this far there is no absolute way of fulfilling these roles, nor are these strengths the end-all-be-all of the male self. Meek also notes this as a more balanced form of masculinity.

Obviously these described roles can be followed or not followed to such an extreme that they can lead to negative consequences in the overall well-being and happiness for the individual:

It is important to recognize that people can have some of these traits and are still normal, happy individuals, it is when these traits are taken to such a strong degree they interfere with their livelihoods and cause imbalance with other aspects of their lives. Having to depend on your partner for instance for some aspects of a relationship is not unhealthy, but shirking responsibilities in several aspects of one's life to the point you can't take care of yourself is.

Individual variation of AB/DL desires is expansive as is the level of involvement in a particular interest. Age play (regression, care-taking), usage of baby items (pacifiers, bottles, etc.), and the usage of diapers are just some of the interests an AB/DL can have. Some individuals may partake in a certain interest but not in others. The feelings experienced as a result from said activities can range from feelings of safety and comfort to even sexual pleasure.


Some Emotions and Experiences at Odds with Male Gender Roles

The biggest male gender role at odds with some of the feelings associated with AB/DL activities are the roles focusing on toughness and aggression. Age regression activities or enjoying the feelings of comfort or safety from them do not fit these roles. Even merely enjoying diapers for sexual pleasure would fail the fulfillment of the role since diapers are associated with an infantile, powerless state. This invokes the concepts of male gender role strain and role conflict.

Gender Role Strain (GRS) is stress related to experience with a gender role, while Gender Role Conflict (GRC) is a pattern of negative consequence as a result of experience with GRS (Meek). Three types of GRS have been described:

So generally, negative feelings such as shame, guilt, or self-hate can come about as a result of GRS. In relation to GRC, research has described several "niches" into a man might experience GRC:

A good example Meek uses is a man restricting his emotions and experiencing role conflict in a relationship:

Meek (2011) said:
...many men restrict their emotions. This may have positive consequences such as the ability to stay cool in a crisis situation, but a disadvantage would be the inability to emotionally connect in a relationship. The man may experience some gender role strain if he does express feelings in the relationship, and the loneliness and detachment that may following this choice is the gender role conflict.
Click to expand...

Applying These Models to AB/DL Examples

I'll use myself as an example in this hypothetical situation. Let's say I enjoy the use of diapers and pacifiers because they bring me a source of comfort. I feel safe, secure, and relaxed doing so once in a while. I start to also feel some guilt and shame in doing so because I am experiencing discrepancy strain by not fulfilling the traditional role to remain tough or aggressive. It is weakness to seek feelings of comfort or pleasure from something considered infantile, or seek comfort of that sort to begin with.

Another example of gender role conflict can be with a partner or friends. Let's say you decide to tell your partner one day and hypothetically she doesn't react in a very supportive manner. She can't accept this side of your personality and tolerates it very minimally. This can restrict your own behaviors or feelings to a point where you feel devalued. Even in a broader sense with friends, their perceptions of masculine behavior or actions can possibly indirectly affect your sense of self. Of course this varies with the individual and the environment and these are only hypothetical examples.

Another interesting example of gender role conflict would be the actual act of self-acceptance. Role changes that bring about questions or challenges of one's preconceived notions of the male self and balancing out their AB/DL side can result in some GRC related feelings and with possible positive life changes. Again, it should be noted everyone comes to terms differently.


What Does Integration Mean? 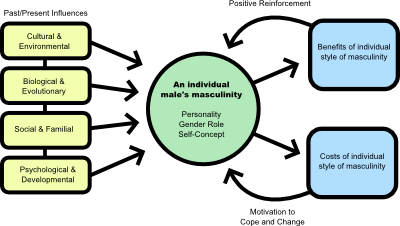 Integration, in terms of gender, is basically the absorption of all the parts that have the self (society, culture, personal values, negative and positive feedback, etc.). There is no absolute or ideal male, but instead one's personal gender role "self-concept" that's been balanced by the "benefits" and "costs" of his individual style. This important thing to note is that achieving integration of the AB/DL side with the individual male self involves weighing in on actions and behaviors and finding peace and balance through those choices. This model shows there are many ways to be male.

One important thing in dealing with negative feelings as a result of GRC and AB/DL desires is having a lot of self-patience and taking the time to recognize them. Taking the time to learn more about one's self and the source of those feelings allows for a better "home base" of dealing with problems. Think of one's "home base" as a solid foundation for oneself that provides a feeling of wholeness and safety. Self-patience is also coupled with giving oneself leeway and becoming more flexible with individual attitudes and behaviors that conflict with it.

By taking the time to understand and learn, one can achieve better avenues beyond negative feelings or frustrating binge/purge cycles. Some tools that can be helpful in understanding one's masculine self-concept are keeping small, achievable goals and keeping a journal to record feelings and experiences. You can look back at these and learn surprising things and also write down positive re-enforcements to foster patience and self-love. These could be useful tools in building self-confidence in that area. It is also important to recognize and take pride in our other "male strengths" in that regard which can be thousands of things if the "male strengths" are any indication.

So Then, What Does it Mean to Be Male and an AB/DL?


Well frankly, it's whatever you have crafted it to be! It is the balanced, healthy, male self-concept that has given you confidence, strength, and courage. It is the acceptance of all the things that make you up. If the AB/DL desires one has doesn't consume one's life or dictate all the choices one makes, then they would seem perfectly fine. After all, the interest hurts no one, and we have more to ourselves than just diapers. As one of the questions asked by ADISC in the introduction cheat sheet asks, "Diapers do not rule our lives! What are your other interests?" It should be the similar when one asks themselves, "What does it mean to be male to me? What are all the things (strengths, quirks, little things) that add to my masculine self and its uniqueness? How has this proven to me and my AB/DL desires?"

Remember to have a little male humor along your journey. After all, nothing ever needs be so serious.